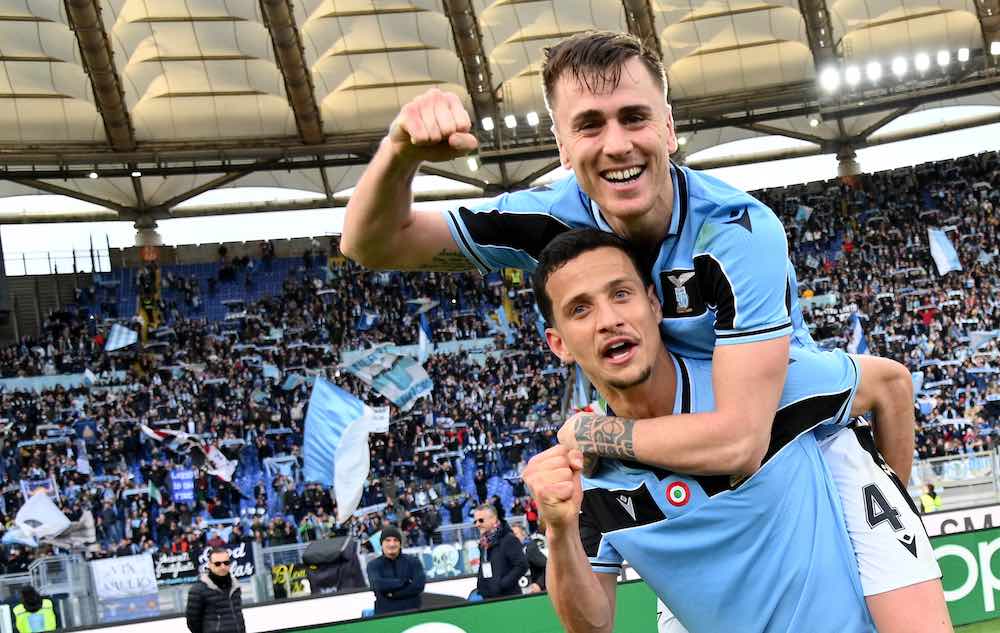 Lazio continue to show great form this season with a 2-0 win against Bologna at the Stadio Olimpico. The club extended their unbeaten streak to 21 games, and with the win have moved up to first place in Serie A.

Juventus and Inter Milan were set to play Sunday evening, but their match has been postponed until May 13 due to the Coronavirus outbreak.

It’s the first time Lazio have sat at the top of the table since 2010, and the last time Lazio led in the standings in the second half of the season dates back to the year 2000, which is also when the Biancocelesti last won a Scudetto…

“If I’d been told we’d be here in Week 26, I’d have been surprised,” Simone Inzaghi told Sky Sport Italia. “At the same time, I felt very confident after pre-season training, I saw what the lads could give and were prepared to give.

“We have top players who work hard, and we have a great group. It was tough for me to leave Denis Vavro and Felipe Caicedo on the bench today, but calculating the Bologna characteristics, it seemed right to use Luis Felipe. I am glad the lads are mature and accept my decisions game to game.

“This was an extremely dangerous match for us as we know Bologna’s strengths and the motivation provided by their coach. I thought we should have scored more goals in the first half, but then struggled a little after the break as Bologna fought back.”

Lazio made a strong start to the game as Ciro Immobile and Correa each had early opportunities to give their team the lead. Neither player was able to capitalize on their chances, but Lazio’s relentless attack finally paid off.

Just before the 20th minute, Correa delivered a pass upfield to Immobile. The Italian received the pass and advanced upfield and then sent a brilliant pass to Alberto. The midfielder finished with a clean shot into the bottom left corner to make it 1-0.

Moments after taking the lead, Roberto Orsolini was denied by Thomas Strakosha. The winger was all alone in the box after the Lazio defence did a poor job of clearing the ball from danger. The goalkeeper challenged Orsolini and made the save to keep the game at 1-0.

Minutes after Bologna’s wasted opportunity, Correa added to Lazio’s lead. Alberto made a through pass to the right side of the box and the forward had a lot of space to work with.

Correa’s shot took a deflection off of Danilo and made it difficult for Lukasz Skorupski to make the save. Correa’s seventh goal this season extended Lazio’s lead to 2-0 and Alberto took his assists for the season to 12.

“I had about six weeks where I was either injured or had a relapse, so now I feel at 100 per cent and I’m really happy,” Correa told Sky Sport Italia.

“The great thing about Lazio is that we are like brothers and never argue. I went to hug Caicedo because he’s like a brother to me, so is Immobile, and we’ve never had a problem in two years.”

Bologna made it difficult for Lazio in the second half as they were the stronger side, yet were unable to score.

The Rossoblu had two goals disallowed as Stefano Denswil’s goal was called back for handball and Takehiro Tomiyasu’s goal was ruled offside after further review from VAR.

Bologna had plenty of opportunities to get back into the match, yet were not able to finish.

There is a lot of belief in the Lazio locker room, but the focus continues to be their return to Champions League.

“It’s an emotional day, the people are excited to stand with us,” Correa told Sky Sport Italia. “If you make a mistake, you just hear applause and that gives us so much help. We want to continue like this.

“We can’t talk about the Scudetto yet. Our strength is that we are taking one game at a time, so we won’t change that attitude now.”