Inter Miami were presented with the toughest opening game they could possibly ask for.

When Diego Alonso’s side travelled to Los Angeles FC for their first-ever game in Major League Soccer last weekend, the new group were full of optimism but at the same time, it was unlikely that they would get a result away from home against the best side in the league.

It could easily have got messy against a team which broke league records for goals scored last season, and a player in Carlos Vela who broke the single-season goalscoring record, but Inter Miami dug in. A strength which will serve them well throughout the season, and it took a wonder-strike from Vela to give the favourites the win.

Inter Miami departed the West Coast with their heads held high, and plenty to build on having just held their own against the defending league champions (Supporters’ Shield winners) for much of the game.

Next up was DC United, and Alonso approached the game at Audi Field slightly differently to the opener, switching from a 4-2-3-1 formation to 3-4-3.

Diego Alonso setting up @InterMiamiCF in 3-4-3 vs DC United.

Centre back Andrés Reyes and right back Dylan Nealis came in for winger Matías Pellegrini and right back Alvas Powell, making it two different formations in two games for the Uruguayan head coach.

This formation could easily have dropped to a defensive 5-4-1 system, but the proactive play of the two wing-backs, and the enterprise shown by both of the wide centre-backs showed that this was an attack-minded system which pressed in transition, but at the same time wasn’t afraid to retreat if the situation called for it.

The average positions below, show it was very much a sweeper, Román Torres (29), flanked by two more progressive centre backs, Reyes (3) and Nicolás Figal (5). 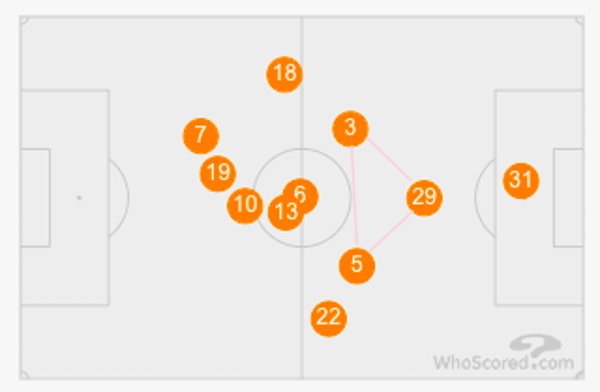 Having failed to score against Los Angeles FC, another game without a goal might have played on the minds of the Inter Miami team in their debut season, but they didn’t have to wait long to find the net in D.C.

The front three combined to great effect, all showing what they can bring to this team.

Draft pick Robbie Robinson held the ball up brilliantly as he had done so often in the first game, but this time was also able to drive at the opposition defence.

The American fed Scotsman Lewis Morgan who had ventured down the right, and his cross was perfect for Rodolfo Pizarro to score Inter Miami’s first-ever goal.

No. 7 Morgan has been a bright spark for the team so far and has been given responsibility at set pieces too.

Pizarro, meanwhile, does pretty much everything else. Attacking, defending, clever passing, dribbling past opposition players with deceptive pace, and all of this while also being the hardest working player in the team.

He also shows plenty of fight, regularly getting involved with opponents during breaks in play.

There were plenty of positives as Inter went in 1-0 up at halftime, but then came the negatives.

Robinson picked up an injury in first-half added time after United defender Steve Birnbaum landed awkwardly on his leg. The 21-year-old was unable to continue.

There was no intention to injure, but it did appear that the centre back tried to stop Robinson in his tracks, and the unorthodox way in which he did so almost looked like a wrestling takedown and led to the injury.

Inter Miami then had a goal chalked off for an earlier handball by Torres, and not only that, the Panamanian was shown a red card.

Miami eventually came to terms with being a man down. Pizarro was everywhere and some excellent defending from the Colombian, Reyes, thwarted DC United on the counter-attack, but they struggled for a focal point in Robinson’s absence and his replacement Juan Agudelo looked rusty.

A late close-range header from Nicolás Figal went straight into the arms of Bill Hamid, and a Morgan effort from distance just needed redirecting on its way through the crowd, but it found its way through to the DC United stopper without getting a touch.

There are encouraging signs, but now they need points on the board, and they will hope they will come in their first home game next weekend, against LA Galaxy.