The Journey Of Lucas Covolan: From Parana To Plainmoor 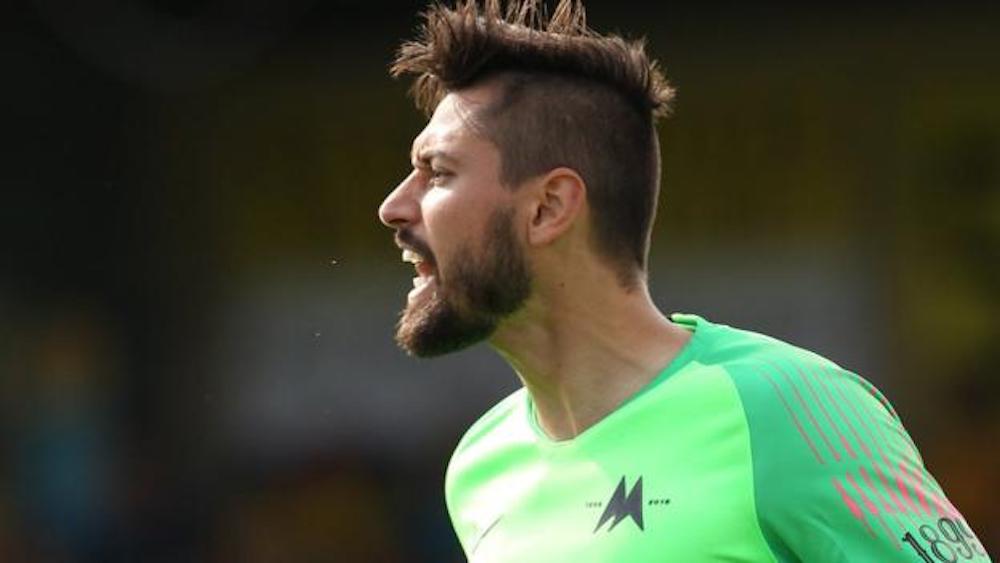 If you were a Brazilian born in the 1990s you’d have had the privilege of watching some great players in the national team such as Kaka, Ronaldinho, and Ronaldo — all players which are known for their attacking flair and/or fancy tricks.

After watching, you’d most likely take to the streets and try to replicate what these players did.

One thing which might have been difficult at this time would be finding someone willing to play in goal, but if you were from the city of Curitiba, you were in luck.

“Many people asked me why I chose to be a goalkeeper, it is something which came naturally,” Covolan told WFi

“At the beginning, when I was younger, I usually played as an outfield player and I was quite good at it, but at first I found it fun being a goalkeeper, then suddenly it became more and more serious. People around me were saying I was good… and not just my parents!

“In the end, I believed in those people and started to like more and more being the one who’s responsible to stop the goals.

“Being Brazilian and not having the dream to be a football player? Sorry, you’re not Brazilian then!”

From the early 1990s, when Cláudio Taffarel, the first Brazilian goalkeeper to play club football in Europe, came onto the scene, Brazil began to produce several high-quality No. 1s.

Those who made a name for themselves in Europe include Dida, Julio Cesar, Heurelho Gomes, Diego Alves, Ederson and Alisson.

There are always stories of Brazilian outfield players growing up taking to the streets to play football, and how one coach changed their lives for the better, but it’s very rare to hear similar stories from a goalkeeper.

“I’m really grateful for growing up as a goalkeeper in Brazil, I truly believe we have one of the best schools of goalkeeping in the world,” says Covolan.

“Every day we have new goalies and really good ones. I believe it’s because most of us can play as an outfield player as well. It’s a different attribute, we are also really good technically,

“There’s too much competition so we try to be perfect in every aspect to become better every day. The true heroes of making me a goalie were my goalkeeping coaches. People who taught me and keep teaching me to help me improve on something in each session.”

What started as a bit of fun on the streets, would soon become a profession for Covolan. In 2009 he signed with Vasco da Gama, joining up with the U20 squad which involved some training sessions with well-known players.

“I was playing for a team called Trieste FC. They don’t have a professional team, it’s a team who works on [developing] athletes, it’s a trampoline to a bigger clubs,” adds Covolan.

“One of the latest players they produced is Renan Lodi, who now plays for Atlético Madrid.

“In one of the games I was playing, a scout from Vasco was watching. He liked what he saw and believed I had the potential to be a [professional] football player.

“After two weeks on trial at Vasco, I had my first professional contract. I was just 17. I was a really inexperienced goalie at the time but I was ready to do whatever it took. It didn’t take long before I started training with the first team.

“The first choice keeper was Fernando Prass. What a keeper! I learned so much with him. I was training with the guys you see on the TV all the time such as Carlos Alberto, who won the champions league with Porto when he was 18, and Juninho Pernanbucano, who was champion a few times in France while playing for Lyon.

Gets better with every watch.🧱🧱🧱🧱 https://t.co/aitaceo34A

“Along with me in the youth team was Philippe Coutinho. He was only 16 at the time.

“After impressing in the youth team at Vasco I had the opportunity of joining the U20 national team, where I played with Oscar. The guy was unbelievable, we could tell easily he would make it.”

Covolan also spoke about the effect being miles away from his family had on him.

“Going to Rio de Janeiro changed me a lot. This was the first time being far away from my family and I needed to grow up fast,” he said.

“I saw things which were different from my reality back home, bad things, not good. Rio is not what you see on TV all the time, beautiful sunsets and beaches…

“There’s more to Rio than the coast, but I’m perseverant and learned fast how things worked there.

“Being far from home was not easy. I cried lots of times but I grew up a lot living with different people from all over Brazil.

“Different cultures, different social classes. Living in Rio for three years was enough to make me realize I was ready for anything. I realized I could live and be anywhere in this world.”

After his spell at Vasco, Covolan moved back to his home city of Curitiba, signing for boyhood club Athletico Paranaense.

With eight goalkeepers fighting for one spot, Covolan struggled to get in the first team which resulted in him moving to smaller regional clubs, Toledo, and Rio Branco.

“Moving to Athletico PR was a dream come true, again, because it’s the team I have supported since I was young,” said Covolan. “Despite not having the chance to play for the first team, it was really enjoyable.

“At the time, several good goalkeepers were fighting for one place and the first choice was [Olympic gold medal winner] Weverton.

“When I was at Athletico PR, I tried to get a loan to get some minutes and get some experience in senior football.

“Unfortunately, it didn’t work well due to picking up an injury warming up in one of the games, and it took me almost four months to get back to normal.

“When I left Athletico PR, moving to smaller teams in Brazil was another challenge. There are too many players, too many agents involved with a big mafia involved.

“Players who give money to managers to play, agents who ‘invest’ in the club, but when it gets to the time the agent’s player needs to play, not all the time the best player plays.

“I moved to three smaller teams before I decided I didn’t want to play in Brazil anymore.

With Covolan no longer wanting to play in Brazil he decided to change his approach, opting to play in a new country, which brought new languages and a new continent.

“Spain was really good culturally for me,” says the goalkeeper. “This was the first European country I went to.

“The language was a barrier at the beginning. I found it was difficult to learn Spanish, and it took me around four months to speak and understand people.

“I lived in Mallorca, a great place to live, but there’s another language there — Mallorquin (which is similar to Catalan, with some different words).

“The football was not great in the lower divisions, but I tried to play for small teams in order to climb up the divisions. This was not easy. Clubs were not paying much, and sometimes weren’t paying at all.

“I got the chance to trail for with RDC Mallorca for three months. This was a good experience to get to know a professional club in Spain.

“At the end, they said I was too old (24), but I didn’t give up. I made lots of friends on the island and I love the people there. The end in Spain opened the door to my next destination.”

After his time in Spain, Covolan was without a club until he was offered an exciting move to unite with a fellow South American in East Sussex.

“I was in Brazil enjoying the time with the family after finishing my season in Spain when a Friend from Athletico PR called me and asked me what I was going to do in the next season (2016/2017),” continues Covolan.

“He said he had a contact which could help me move to England. I was surprised but very excited to make it happen. He was an agent from Spain who helped me to move to Whitehawk FC, and he knew the Argentinian manager from Whitehawk at the time.

“It didn’t take long for me to adapt to English football. I think for a goalkeeper it’s easier than an outfield player to settle.

“The biggest difference is technical. Brazilians are so technical and unpredictable in any position, and here is more physical, tactical and direct.”

After playing for Whitehawk, Lewes, and Worthing over a four year period, this season Covolan moved up a level to play for National League outfit Torquay United, where he’s broken into the first team.

On a personal level, he is currently enjoying a solid season in the South West, where he has kept six clean sheets.

“Being part of Torquay is really good,” he says. “What I like the most is the winning mentality everyone has, and the ambition to achieve more.

“Everyone is working hard, pushing hard each other. The professionalism everyone displays is really good.

“We have had ups and downs at Torquay this season, lots of injuries which haven’t helped us at all. We’re not happy where we are in the table, having wanted to get promoted at the start of the campaign.”