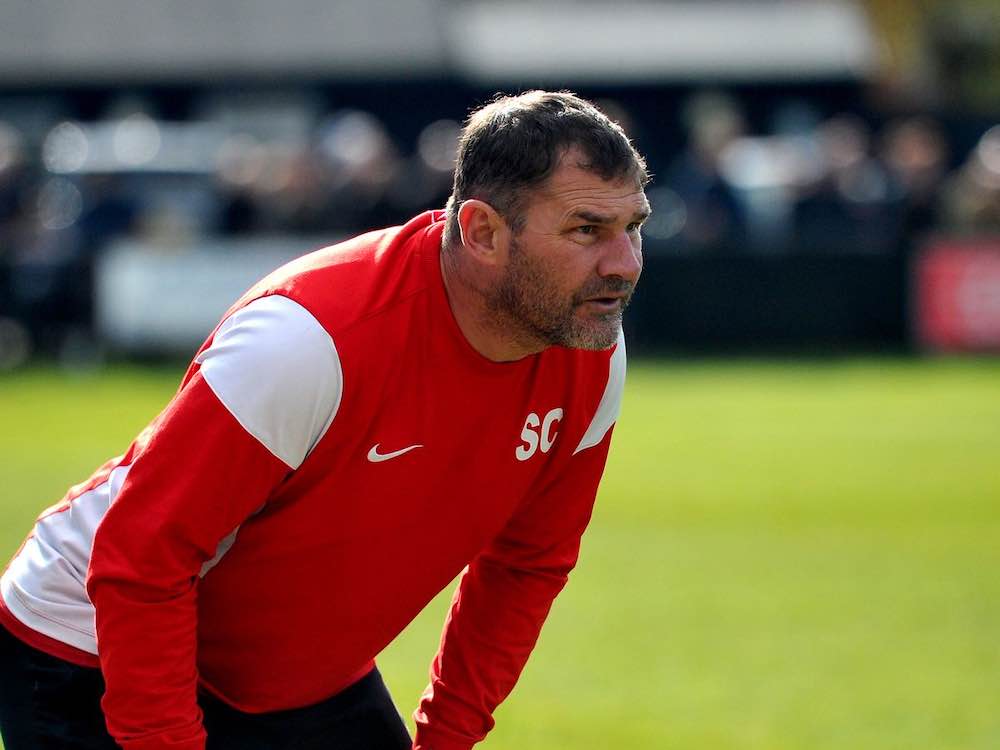 James Rowe spoke to Royston Town manager Steve Castle for WFi. They discussed managing in non-league, his playing days, and an ambition to coach abroad.

You have been manager of Royston Town since 2013. How are you enjoying managing the club and what do you view as the main challenges?

“Royston Town has been a real labour of love. I am in my 7th year as manager and we have been very successful.

“The club is not a massive club in non-league terms, but as I am sure you are aware of non-league and the steps, we were non-league step five. Just before I arrived at Royston Town, they got promoted so I managed to get the club from step four to step three. We are now competing to possibly get to step two and we have a few cup runs in the making as well.

“Royston Town are a club that have been used to success the last 15 years and we have been very well financially supported by the board and Steve Jackson our Chairman.

“We could do with more supporters, but that comes with the success that we are getting, and it is gradually getting there. It has been a steady incline of superiority.

“We’re in the county of Hertfordshire and we were probably in the third band a few years ago and I would say that we are in the top band now. We have managed to bring our branding and recognition to tremendous amounts to the county, and to the South East.”

You had a very long association with Leyton Orient, making many appearances for the club over different spells. How do you long back on your time at Leyton Orient and what does that club mean to you?

“Leyton Orient are a fantastic club. I have been very lucky in my football career. I have managed to succeed and do well at most of the clubs I played for including Leyton Orient.

“I started out at the club as a 16-year-old apprentice, managed to get myself into the first team, and ended up club captain for a number of years.

“I had a few opportunities to move to what were then First Division clubs, but if things did not work out, I declined, or the money was not right.

“I stayed at the club until I was 25, so it was just under ten years I was there. Leyton Orient got their fill out of me. I got myself in double figures and I was leading goal scorer from midfield for quite a number of years.

“Leyton Orient were also my local club I had a close relationship with my Dad and he was there watching me week in and week out, so it is pleasing to look back on my time at the club with very fond memories.”

You also played two seasons for Birmingham City. How do you reflect on your time at the club?

“We were attracting crowds of over 15,000 in League and I do not want to discount what I did at Plymouth. I love that place and hopefully I am held in high esteem at the football club.

“Birmingham City was a different story. I went up there with the then manager Barry Fry, and he got a lot of players together and there was not as much organization. I did not have many opportunities to play, and that coupled with injury and form meant I did not play as many games as I wanted.

“I think I ended up playing 30 matches in two seasons which I was not too pleased about, but as I say I have been very fortunate with the clubs I have played for.

“I would add Peterborough United to that list too. Birmingham City was probably the club that I was slightly disappointed about not hitting the heights. Birmingham City are a great club and it still is.

“It remains the highest level that I played at, and playing alongside players such as Steve Bruce, Mark Ward, Gary Ablett, and having Trevor Francis as my manager — I have some great memories of my time at the club.”

You mentioned playing under Barry Fry and Trevor Francis. During your playing career did you come into contact with managers that encouraged you to go into management or is it something that developed for your own personal character?

“I would say probably the latter. I was very fortunate in that nearly every club I played for I was the club captain, vice-captain, or player coach, so it was always a natural line that I did go on to the coaching side of it.

“My last club where I played a lot of matches was at Peterborough United, and I was player-coach and first-team coach too, as well as a player.

“I did my coaching badges quite early. I got my A License when I was 30 and went on to play football until I was 36.

“I wanted to do something with my qualifications and I ended up training West Ham’s under 13 team, which included the likes of Mark Noble and James Tomkins. I have been on quite a journey.

“I am 54 years old now, so around 24 years experience in coaching and managing, and you accumulate experience as you go along.”

Finally, Steve, you have mentioned the experience you have accrued as a manager. What would you ideally like to go on to achieve in your managerial career in the future?

“Well, it is quite interesting actually, although I would like to manage in the professional leagues, and possibly even international [level], I am really keen to spread my wings — seeing if there were any opportunities abroad.

“I know how quickly things can go for coaches. For example, I know that Tommy Taylor has been managing over in India and it seems quite appealing. If I could maybe get to that level in terms of showcasing my football experience and the CV that I have, is going about it the right way.

“It would be an ambition that I could get a post in Asia or China or any place that could present a nice challenge for myself would be something that would be really appealing for me.”