The Spezia Firefighters And The 1944 Campionato Alta Italia 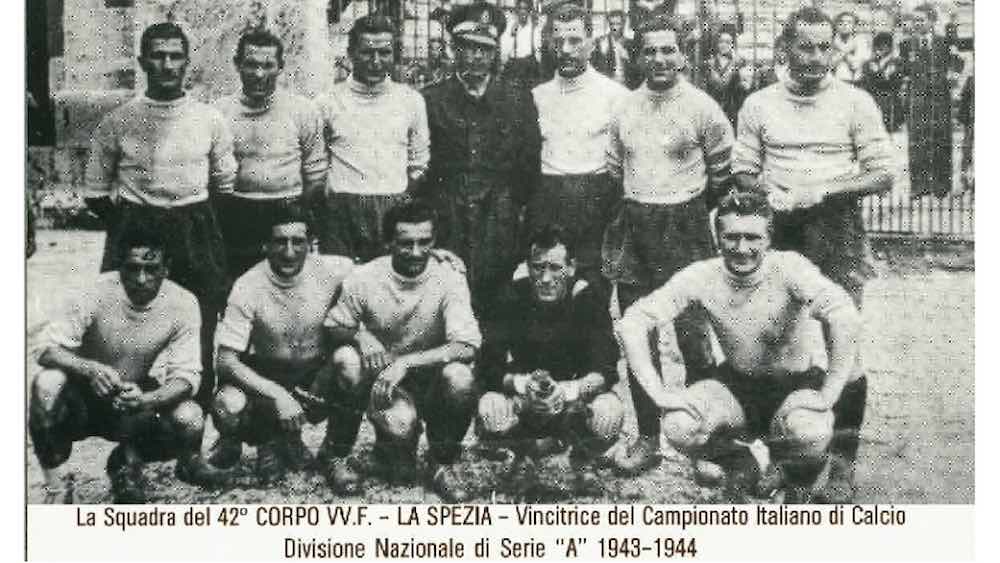 With European football postponed due to the COVID-19 outbreak, there has been much debate about whether the 2019/20 Serie A campaign should continue, and if so, how the season should be completed.

In early March the FIGC released a statement announcing they were considering three options to end the season, including a playoff to determine the Italian champion, though it’s not the preferred option.

In the history of Serie A, a playoff has only been used once to determine the Italian champions…

To set the scene, the year is 1943 and the Second World War has just entered its fifth year. Adolf Hitler’s German forces have been weakened after losing the Battle of Stalingrad in February to the Red Army of the Soviet Union and later by a failed attack on Soviet forces around the Kursk Bulge.

Meanwhile, Allied forces have overtaken Sicily and moved north to invade mainland Italy.  The King of Italy stripped Mussolini of his powers and placed him into custody, but only a few months later he was rescued by the Germans.

Amid a world war with a country divided in two, Rossi announced there will be no Serie A, but instead, a tournament will be played amongst the clubs in the northern regions – the Campionato Alta Italia, or the Championship of Northern Italy.

The tournament consisted of three rounds, each played as round robins. The top two clubs in each qualification group advanced to the semi-finals, which was comprised of four groups of four.

As the finals would be played on neutral ground in Milan, the clubs in the finals played each other only once. The club with the most points after their two matches would be awarded the title. 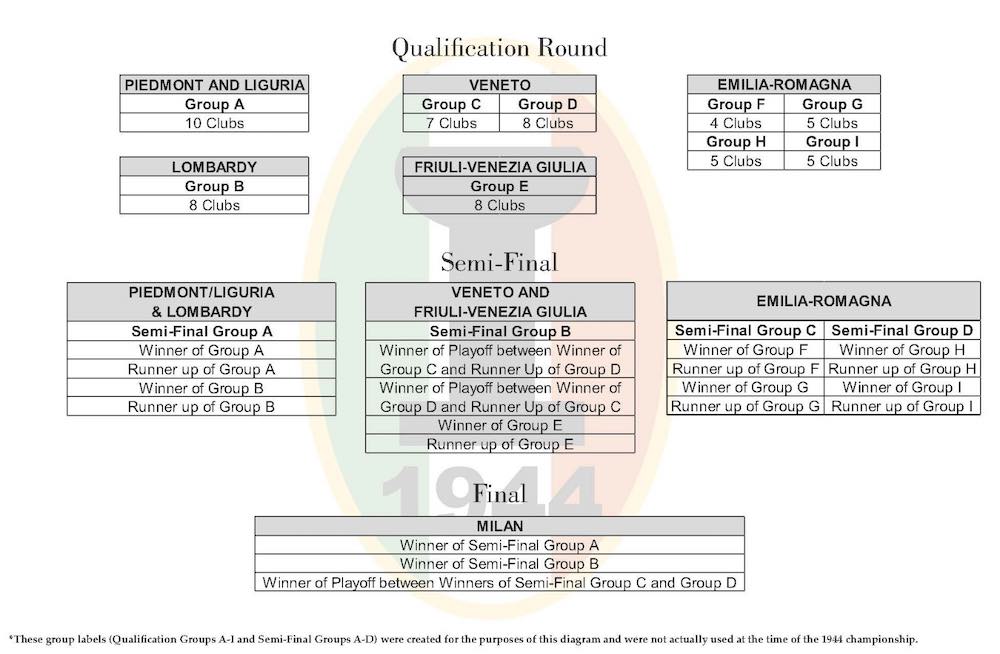 Though La Spezia is situated on the eastern edge of Liguria, Spezia Calcio are placed in the Emilia-Romagna group.

The war wreaked havoc both on the Ligurian city and its football club. The region was under siege and inflation was up 300%. Club president, Coriolano Perioli, had been captured and sent to a concentration camp in Germany.

Several key players that led the club to a sixth-placed finish in the 1942/43 Serie B campaign were beyond the Gothic Line – Germany’s last line of defence from the Allied forces – and could not return.

Enter La Spezia Fire Chief, Luigi Gandini. Gandini offered the remaining players room and board, and more importantly, the opportunity to play football. In so doing, he removed the obligation of these players to serve in the military.

Gandini also took advantage of a resolution issued by the Football Federation suspending player registrations cards until a future date. This effectively meant players could play wherever they wanted.

The vacant positions were filled with players from Genoa, Napoli and Livorno, all of whom were registered as fire-fighters, complete with uniforms and all. Ex-Genoa and Italian national player, Ottavio Barbieri, was named the new manager.

VV.FF. Spezia, as they were called, were placed in the fourth group in the region of Emilia-Romagna (or what we’ve called Group I), along with Corradini Suzzara, Fidentina, Parma and Orlandi Bussetto.

In Spezia’s first match, Barbieri unveiled what would become known as the mezzo-sistema, and then more famously as catenaccio which was a hybrid of the Italian metodo or WW formation (3-2-3-2) and the English WM formation (3-2-2-3) known in Italy as il sistema. The key difference was that a free player would help build the attack from the back when in possession, but drop back to man-mark the opponent’s centre forward when defending.

The Firefighters finished top of the group, going undefeated with a record of five wins, three draws and no defeats to advance to the semi-finals where they were placed in a group alongside Corradini Suzzara, Carpi and Modena.

Once again, the Firefighters topped their group, this time with five wins, no draws and one loss. By winning the group, Spezia went on to play the winner of Group A, Bologna, in a two-legged playoff to determine who represented Emilia-Romagna in the final.

Bologna dominated the first leg but were unable to beat keeper Sergio Bani. In the 79th minute, Spezia went ahead 1-0 through Paolo Rostagno, and after an altercation between players and supporters, the match was suspended, and Spezia are awarded a 2-0 win.

The return leg was scheduled to be played in La Spezia but is moved to Carpi because of heavy bombings in the area. In the end, after protests from Bologna chairman, Renato Dell’Ara, the match was cancelled and Spezia advanced to the final.

In the final round-robin, Spezia squared off against Torino FIAT and Venezia, the winners of semi-final Groups A and B, respectively. 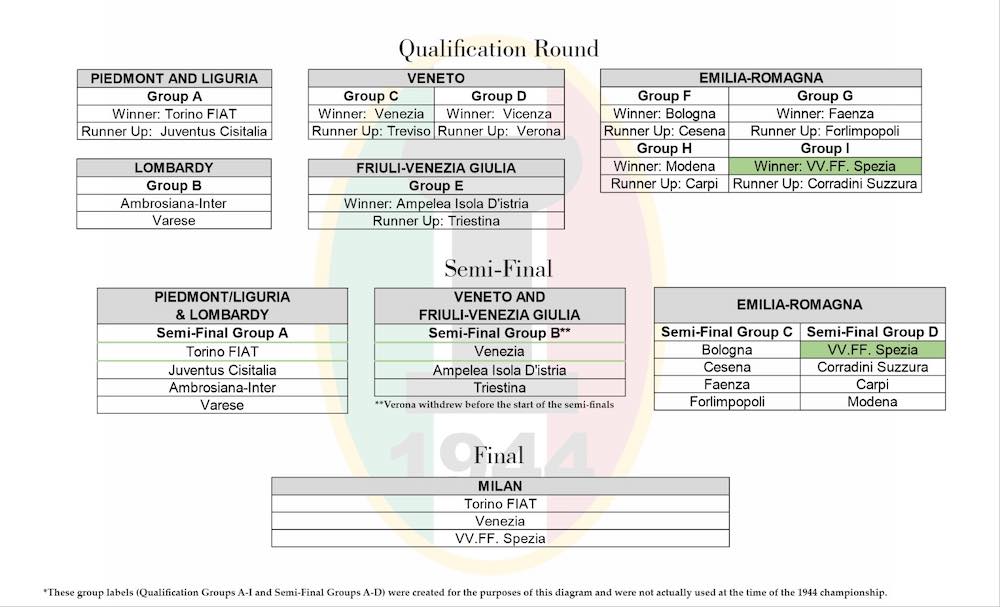 The first match of the finals, between Spezia and Venezia, ended in a 1-1 draw.

The second match was truly a battle of David versus Goliath, as the Spezia Firefighters squared off against the giants of Turin. Up to that point Torino had 19 wins, four draws and only one loss in the tournament.

As the story goes, Torino manager Vittorio Pozzo entered the Spezia changing room prior to the match and congratulated the players for reaching the finals. He poured fuel on the fire when he promised to take it easy on them.

But Pozzo underestimated the strength of the Barbieri’s mezzo-sistema. Barbieri played Mario Tommaseo in the free role, assigning him the unenviable task of marking the great Valentino Mazzola.

Tommaseo was up for the challenge. Though Mazzola smashed the crossbar late in the match, he otherwise had little impact on the game. Spezia shock the Granata with a 2-1 victory on a brace from Sergio Angelini.

Torino defeated Venezia 5-2 in the final match. As a result, the Firefighters became champions of Northern Italy. Not that they knew it at the time, as they had already left Milan to return home to their families.

The championship went unrecognized by the FIGC for nearly 60 years. Though Spezia would not be awarded a scudetto, in 2002 the FIGC recognized VV.FF. Spezia as the honorary winners of the 1944 championship.

To this day, Spezia Calcio, who never actually participated in the 1944 Campionato Alta Italia, honour the memory of the Firefighters with a tri-colour badge permanently affixed to their jerseys.