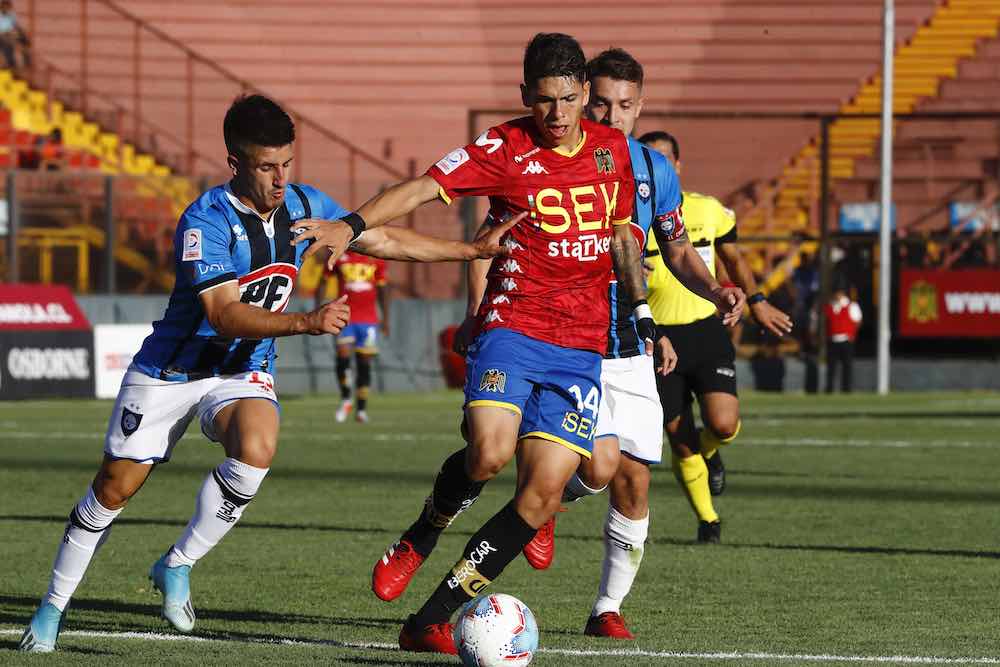 Welcome to a new series of player profiles looking at young South American talents that are very much in the primary stage of their professional career, yet offer huge potential.

Adam Brandon first takes a look at the most exciting young player in Chile at the moment:

After a decade of unprecedented success, Chile look set for a barren spell with the golden generation fading fast and lacking some sparkle. Therefore they are desperately in need of an injection of exciting young talent, and in Carlos Palacios they may have finally found it.

Palacios has been inseparable from a ball since he was two-years-old. Growing up in the satellite town of Renca, he was first picked up by a professional club at the age of ten by Santiago Morning – a historic yet small club in the capital. After a couple of years there he moved across the city to Unión Española, the fifth most successful side in the country.

According to the player himself in an interview with the club website back in 2017, his time in the youth divisions was mixed before finding Jose Luis Sánchez who proved to be a perfect match for the player. Sánchez, an ex-forward for Unión Española with spells in Argentina and Spain, was in charge of the U17 Unión Española side and it was him that gave Palacios the freedom to play and express himself. 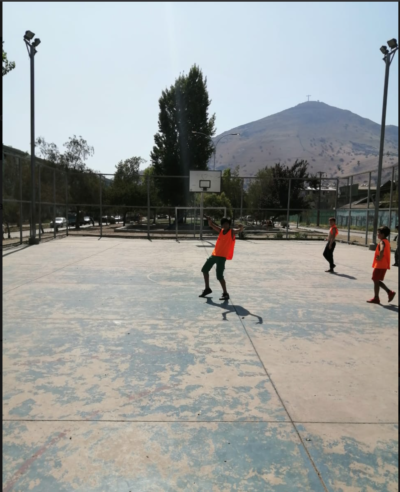 Palacios grew up playing on this pitch in Renca.

Palacios soon progressed under the coaching of Sánchez and first broke through at Unión Española with a number of promising substitute appearances at the end of the 2018 season. He was promoted to the senior side by legendary Argentine striker Martin Palermo who was head coach of Furia Roja at the time.

Disappointingly, he was then bafflingly ignored for the first half of the 2019 season by Fernando Díaz, a manager known for insipid defensive football. However, the arrival of the more attack-minded Ronald Fuentes has seen Palacios thrive in the Chilean Primera Division over the past year and he has made a habit of picking up the Man of the Match award. 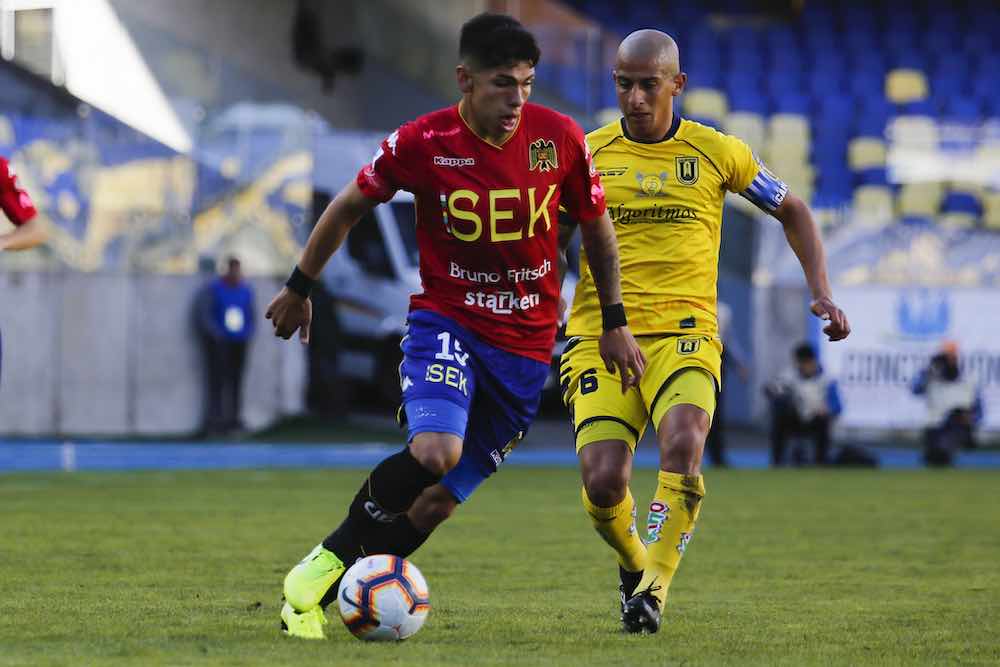 At present, the 19-year-old is thought of primarily as a right-winger/wide-forward, but he has the potential to play anywhere across a three behind a striker. He is very good at finding space, this is especially noticeable if you have a wide view of the pitch where his guile and willingness to get on the ball is clear to see.

He likes to drift in and influence matches especially when his side is chasing the game and has an eye for a through ball. The data backs this up, he is already featuring in the top three for this category in the Chilean Primera Division and he is at the top for smart passes attempted according to WyScout too.

He’s already pulled off a number of impressive long as well as difficult passes too, and although his accuracy for these could improve, his willingness and bravery to attempt them is something more worthwhile for now at this stage of his career.

Further evidence that his future may lie centrally is the fact he often played there at U17 level and his hero is Juan Roman Riquelme. He also stated in an interview with Chilean radio station Al Aire Libre in April that he dreams of playing for Boca Juniors next.

If that’s not possible, Palacios added he would love a move to Argentinian football anyway before making the leap to Europe, which is a route Chilean superstar attackers Marcelo Salas and Alexis Sanchez have both taken in the past, albeit for River Plate rather than Boca.

Unlike many attacking talents Chile have produced, he also offers a bit more height than the norm. Although his official height on most sites is given as 1.80 m (5ft 9in), to me he looks slightly taller than that when I have seen him close up in the flesh, although he could do with adding some muscle.

He has proven he can use his body well to win free kicks and has allowed him to dominate many defenders physically as well as technically. His dribbling ability is clear to see, often bamboozling defenders with his quick feet and change of direction and again he is in the top three for progressive runs and dribbling (WyScout) in the league. Unsurprisingly, he is the joint-most fouled player in the league so far in 2020.

Palacios for all his technical skills and physical attributes also has promising decision-making ability even if there is a slight tendency to shoot from outside the box or force the issue a bit too often, especially when his side is in need of a goal.

Six matches at the end of 2019 produced 2 goals and 2 assists, and although he is yet to score or assist in seven matches in 2020, he has been a standout performer in most home matches Union Española have played in the past few months.

In one of his two assists so far at professional level, he makes the decision to cross first time after some good combination play. In the other, his pace is clear to see as he beats his man to a long pass, takes it in his stride and then lifts his head to play a nicely weighted pass into the path of an onrushing attacker.

It has been notable that Palacios hasn’t repeated the type of wing play much this season. In fact despite Unión Española putting the second most crosses in the division so far this season and Palacios playing as a wide man, he doesn’t feature in the top seven for his club for crosses per 90 minutes. For comparison, he was top three last year for Unión (WyScout). This again gives an impression of a player looking for a more central role.

Overall his stats per game for key passes and shots have increased (InStat) as he fast becomes the focal point for the majority of Union Española’s attacks. His side have played some of the most entertaining attacking football so far in Chile in 2020, including being involved in a 4-4 thriller against Huachipato – the first Chilean Primera Division match to be broadcast on free to air TV for almost twenty years.

Palacios wears the number 14 for Union Española this year and although he didn’t get an assist in this game, you can see below that his presence forced the own goal to put his side 2-0 up (1 minute into the video).

Given his position and role in the side (a wide forward in a 4-3-3), some would argue he does need to start adding some more goals to his game before he can really be on the top of the scouts list watching Chilean football.

He has generated an xG of 1.85 (WyScout) so far in 2020, which is the third most in his team, but the four players around him with an xG of more than 1.0 all have at least one goal to their name so he has underperformed on this small sample size.

His two finishes so far in his professional career were eerily similar and perhaps more tellingly both came after a switch to the left wing. Both came from his favoured right foot from just inside the box, curled across goal into the far corner of the net.

Despite the lack of goals this term, he has looked threatening from range and the general consensus is that once he gets his radar configured, he has the potential to be lethal. Again, the stats (WyScout) back this up with Palacios managing to get the most shots away per 90 minutes for players aged 23 or under in the Chilean Primera Division so far this year.

In fact, if you just include U23 players in the data then he really is unquestionably a standout performer overall as he regularly features at the top for a number of attacking and construction stats. As the season was progressing, he looked set to take on more and more creative responsibility. When football in Chile (unlikely before August) resumes it will be interesting to see if he given an even more prominent role in the side.

It is worth noting that Palacios hasn’t been part of any Chilean U20 squads in the past couple of years, although he was briefly part of some U17 Chile squads a couple of years ago.  He appears to be a talent that has gone largely ignored outside of his club, though — a gem hidden under the more hyped names at bigger clubs in Chile.

Those hoping to catch him at youth level for Chile in the coming year will be disappointed given he is just too old to qualify for next year’s U20 South American Championships. So if he is to pull on the red shirt of Chile anytime soon it looks set to be for the senior team, something that could well happen in the next couple of years.

It’s relatively early days for this talented young Chilean and he’s playing in one of the weakest leagues in South America at the moment so scouts at bigger clubs might be cautious for now, but they will surely be keeping a very close eye on his development post-Covid-19.