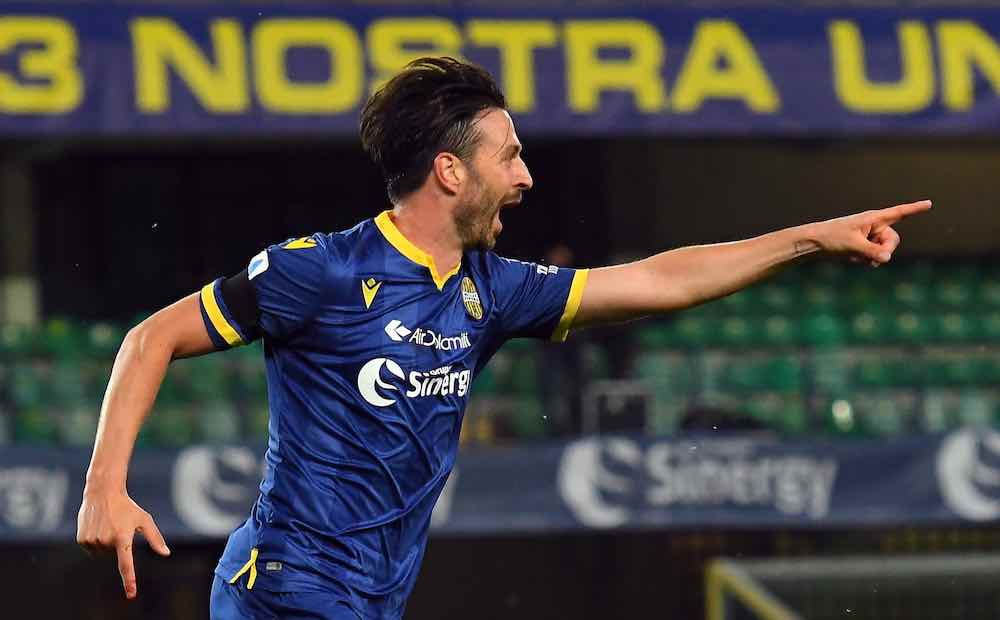 Serie A returned after a three-month break with Hellas Verona defeating Cagliari 2-1 at the Stadio Marcantonio Bentegodi.

Verona continued where they left off and have been impressive under Ivan Juric. The home side were strong throughout as Samuel Di Carmine led the way up front with two goals for his side.

Cagliari’s struggles continued as newly appointed manager, Walter Zenga, didn’t have the start that he had hoped for in his debut.

VAR is once again a topic of discussion after a controversial call made by the referee, Gianluca Manganiello. The decision, fortunately, didn’t have an impact on the final outcome.

This was a pivotal match as each side look to earn a spot in next year’s Europa League.

Verona’s quick start was the difference as they scored twice in the first half-hour of the game.

The home side controlled the tempo for the majority of the first half with clean passes, more challenges, and greater possession to limit Cagliari’s chances.

“We started badly and immediately allowed a shot on goal in the first minute,” visiting manager Zenga told DAZN.

“We didn’t get a grip on the game and our first 20 minutes were unacceptable. We cannot concede two avoidable goals because a team can easily drown after a start like that.”

Darko Lazovic started the match well, using his speed and movement to his advantage down the wing.

He set up Cagliari’s first goal with a pass into the penalty area, while Di Carmine positioned himself to beat Fabio Pisacane and head the ball into the back of the net. The striker netted a brace within the first half-hour of the game, which proved to be vital.

Did VAR Help Or Hinder The Referee?

Shortly after Verona took their two-goal lead, Verona were down to ten men, giving Cagliari a potential way back into the game.

The decision came following Fabio Borini’s challenge on Marco Rog, which saw Manganiello brandish his red card. VAR didn’t come to a decision, so the referee went to the sideline to review the play. After further review, his final call to stick with his original decision seemed harsh on the midfielder.

Borini made a clear challenge for the ball, yet his follow-through was deemed a reckless challenge. The replay showed that while Borini’s boot was directed towards Rog, he never saw the Cagliari player and was in no position to avoid the challenge. The attempt for the ball was made first, with no intent to hurt the player.

A red card for Borini for a late tackle! 🔴

Verona’s grip on this game just got a little looser as Cagliari grab a lifeline 👀 pic.twitter.com/tXDukx2wBd

VAR is not the problem, but the people in control of the decision continue to be inconsistent.

“It was a very important game, as we must secure our safety as soon as possible,” Juric told DAZN.

“I will admit, my reactions [to the decision] were a bit over the top as we’d been waiting so long for this match.

“I also got angry because we were dominating, should’ve scored more than two goals and then had this red card that was completely unfair.

“All I will say is that the objective for us and the club is to ensure we stay in Serie A.”

This is an ongoing saga which, luckily, didn’t turn out to be the difference-maker in this match. It would have been an unfortunate circumstance for Verona if it had affected the result, though.

After the sending off, the momentum duly shifted in Cagliari’s direction as Giovanni Simeone scored before half time, but although they had the man advantage, the visitors struggled to capitalize. They even lost this advantage late in the game when Luca Cigarini was sent off with 20 minutes remaining.

It wasn’t the start that Zenga had hoped for in his managerial debut for Cagliari after he replaced Rolando Maran, who was fired in March. Their last win in Serie A dates back to December 2 against Sampdoria.

This loss extended this winless streak to 12 games. The team looked dysfunctional, regularly turning the ball over in the final third, their passing was indecisive, and they failed to convert chances.

On top of this, their defence were poor for both goals conceded. Pisacane was poorly positioned and lacked any strength against Di Carmine for the first, while Verona were given the freedom to create and score their second with ease.

The problems are spread all over the field and Zenga has his work cut out for him. Restoring Cagliari back to winning will be no easy task for the new manager.