Jack Wilshere Was ‘The Best English Talent Since Paul Gascoigne’ So What Went Wrong? 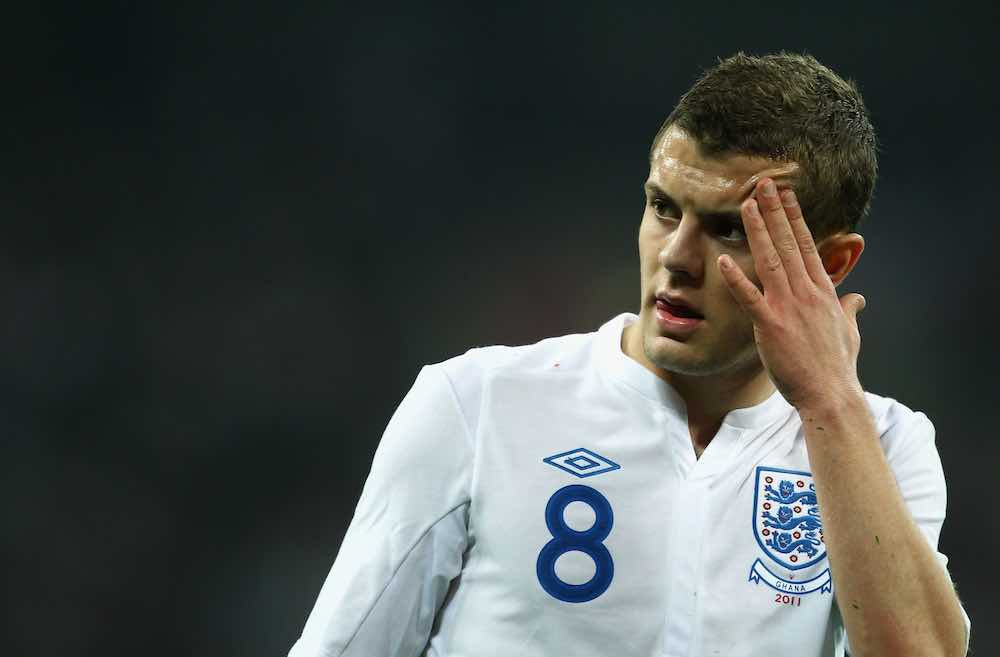 On the 16th of February 2011, the world thought they had seen the start of a very special career. Arsenal had just defeated FC Barcelona 2-1 in the Champions League round of 16.

19-year-old Jack Wilshere had dominated the midfield against the likes of Andreas Iniesta and Xavi.

From then on, Wilshere was classed by many as one of England’s most promising talents for many years — Stewart Robson told Talksport that Wilshere was “the best English talent since Paul Gascoigne.”

However, like Gazza, Wilshere has not fulfilled his potential. Now 28-years-old and at West Ham United; we will look at how Wilshere got here and what went wrong. 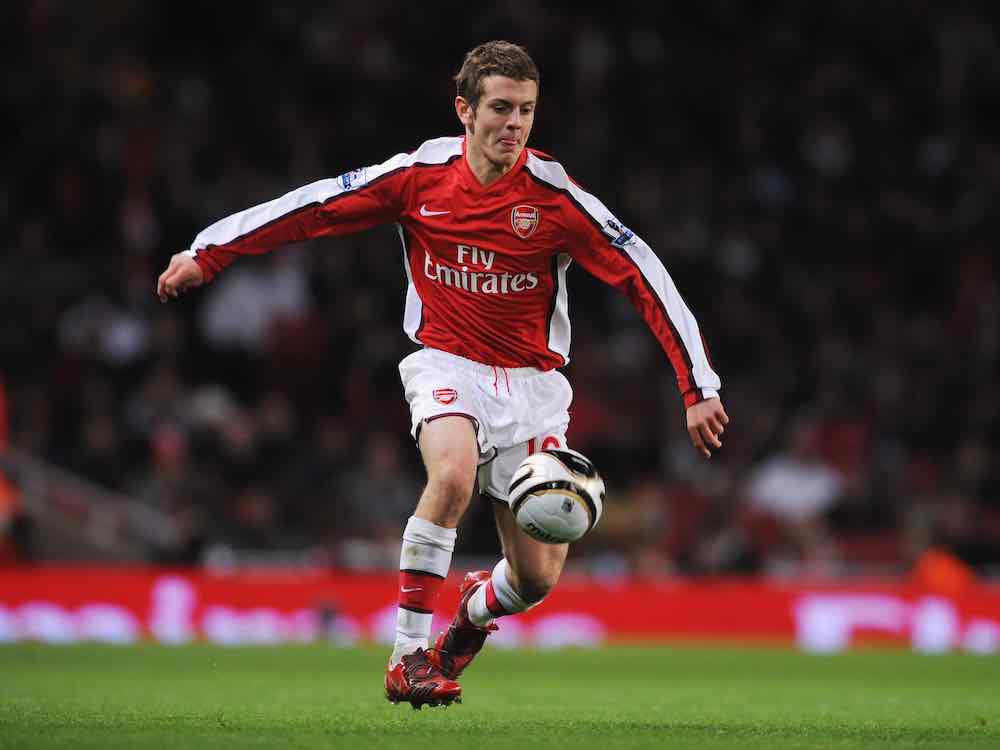 Wilshere joined Arsenal’s academy aged nine years old in 2001, arriving from Luton Town whom he had joined a year prior.

Wilshere progressed through the youth academy and was noticed in his first season of under-18s football where he scored 13 goals in 18 games from midfield. Even more impressive is the fact he was only 15 years old at the time.

Wilshere’s talent was also on show when Arsenal won the FA Youth Cup in 2009. He was heavily involved in the tournament and produced a Man of the Match display in the first leg of the final where he scored once and assisted twice in a 4-1 win.

His performances in the youth team led to inclusion in the first team throughout the 2008/09 season. He made his debut against Blackburn Rovers on the 13th of August 2008 as a substitute. Then, 10 days later, made his first-ever start for Arsenal and managed to score in a 6-0 win against Sheffield United.

Wilshere went onto make six more appearances for the first team during the season, with two of them coming in the Champions League.

The next campaign saw Wilshere get consistent minutes in the Premier League when he joined Bolton Wanderers in January 2010 on loan. 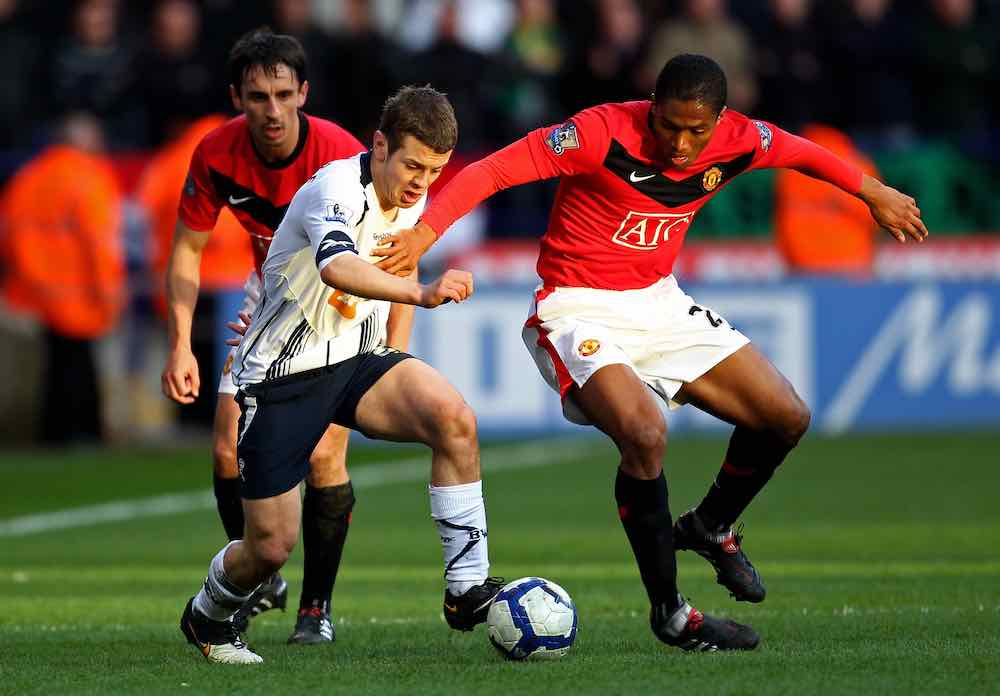 The midfielder made 14 Premier League appearances for the Lancashire club and scored his only goal in a 2-1 win against his childhood team, West Ham.

Although Bolton manager Owen Coyle was desperate for Arsenal to loan Wilshere out again for the beginning of the next season, Arsène Wenger had the Englishman in his plans for the following campaign.

Wenger was true to his word and the teenager played 49 games for Arsenal, starting 44, during the 2010/11 season.

This season also brought a first England call-up. He made his debut for the three-lions on August 11, 2010, in a 2-1 victory over Hungary.

It was beginning to be more widely recognised that the youngster had great talent and ability. He had a great football brain, but also had passing quality, close control and mixed it with a pinch — perhaps slightly more than a pinch — of tenacity. Many saw him as a future star.

These predictions of future stardom were then backed up during one game — Barcelona at home on February 17, 2011.

It was the first leg of the last 16 in the Champions League, and Wilshere was starting alongside Alex Song with Cesc Fabregas just in front of them.

The opposition were the ones to worry about, though. Arsenal were coming up against the best midfield trio at the time in Sergio Busquets, Andreas Iniesta, and Xavi. 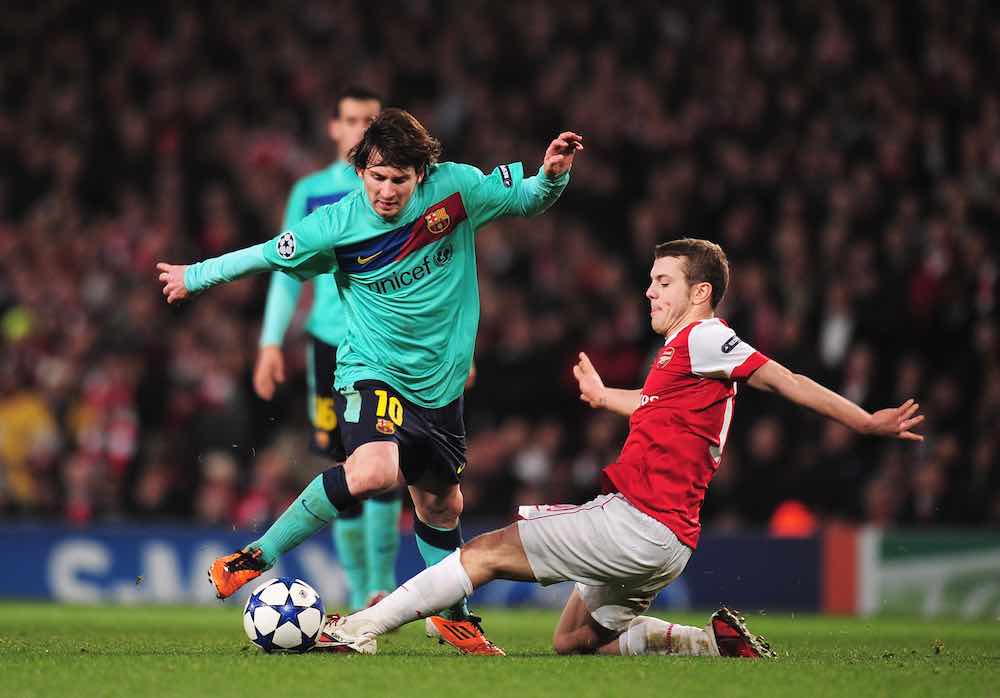 19-year-old Wilshere had a brilliant game, bringing all of his skills to the European stage as he helped his side defeat Barcelona 2-1 with a strong midfield performance that is still talked about today. Wenger described the performance as “outstanding”.

Wilshere was also rewarded with his first England start eight days prior to the Champions League tie — it was all going great for the youngster as he continued to flourish and develop throughout the season.

After a great first full season with the Arsenal first-team, Wilshere was ready to push for a place in the England team for the 2012 Euros, as well as further proving his ability with Arsenal in the Premier League.

In a pre-season friendly against New York Red Bulls on July 31, 2011, Wilshere picked up an ankle injury. Initial scans were positive and only showed inflammation in the ankle. Wilshere tweeted: “Ankle scan just showed some inflammation. Hopefully will settle down in a few days.”

It was not so simple for the English youngster as it was diagnosed that he had a stress fracture which needed surgery, and was to be out of action for much longer than originally expected.

His projected return of February 2012 was too optimistic, and he did not play any part in the 2011/12 campaign. He suffered another setback during his rehabilitation, as a flare-up in his knee needed minor surgery.

After his earlier performances, Wilshere could’ve been certain for a spot in the squad for the 2012 Euros — but injury prevented it.

It was disappointing for the Arsenal midfielder, and ultimately was a foreshadow for a career filled with many more unfortunate injuries.

Recovery was difficult. Wilshere ended up making his return to football against Queens Park Rangers in a 1-0 win in October 2012 and was named Man of the Match. He was able to build up his performances throughout the 2012/13 season, playing the majority of games.

Although he had a slight ankle injury towards the tail end of the campaign, his future was looking bright again.

Within a few months, he had committed his long term future to Arsenal by signing a contract in December 2012. He then was given the captain’s armband when Thomas Vermaelen went off injured against West Ham in January 2013. In the following month, Wilshere made his first start for England post-injury.

It was all looking positive…

Although the 2012/13 campaign brought back the positives for Wilshere, he was soon to become injury-prone — something no footballer wants to be known as.

In the 2013/14 season, he continued to showcase his ability, even though he was operating on the wings for some games due to injuries.

His game, as well as Arsenal’s, was epitomised in a goal he scored against Norwich in October 2013, where after an excellent move Wilshere scored with a delicate first-time finish into the bottom corner. The goal was named BBC’s Goal of the Season.

However, towards the end of the season, another injury arrived. During a friendly against Denmark for England in March, Wilshere was injured in a challenge with Daniel Agger. This foot injury would keep him out of action until the last game of the season, where he would only appear from the bench against Norwich.

The two following seasons were the worst for Wilshere. During the 2014/15 and 2015/16 seasons, he only started 10 Premier League games. He suffered an ankle injury against Manchester United on in November 2014. It wasn’t the same ankle he had injured in 2011, but it had similar effects and kept him out of action until May.

He suffered another huge knockback in 2015 as he was omitted from the Community Shield game against Chelsea in August due to breaking his fibula in training beforehand. Wenger initially said the injury was not too serious and it would only be a matter of days before he rejoined the squad.

This turned into a few weeks as surgery was needed, and ultimately would cause him to miss almost the whole season.

Wilshere was now 24 years old, and his career was slowly diminishing. This raised the question: would the once talented teenager ever fulfil his potential?

Moving On Loan To A.F.C Bournemouth

The following season brought another problem. Wilshere was fit, but as previous years had shown, he could not be trusted to remain that way. The signing of Granit Xhaka in the summer was made with this in mind.

Wenger had granted Wilshere permission to go out on loan to find consistent first-team football. Everyone knew that if the midfielder could stay fit, he could be beneficial to many sides.

This was shown by the amount of interest in him. Over 20 clubs in England and around Europe wanted to sign him, but it was to Bournemouth Wilshere decided to move.

It was a nice fit, with Bournemouth’s style of play parallel to Wilshere’s. Eddie Howe wanted to make the England international an integral part of his side. 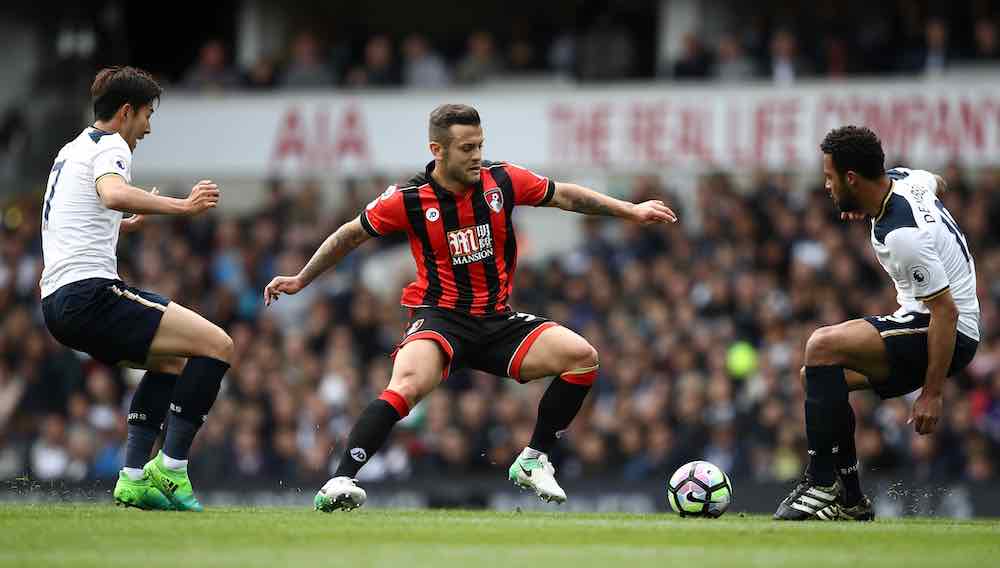 It seemed a great decision. He won consecutive Player of the Month awards for the club in October and November and had the much-needed consistent game-time, playing in every game but three in the Premier League until April.

Typically, Spurs away was going to be a big game for Wilshere, but it could not have gone worse. Bournemouth were embarrassed 4-0 after Wilshere had to substituted mid-way through the second half when he collided with Harry Kane. It was found that he had a hairline fracture to his left fibula, similar to the injury which kept him out for the majority of the previous season.

This meant that his great season with Bournemouth had a sour end, and he played no further part for the south coast club.

Wilshere returned to Arsenal for the 2017/18 season and steered clear of injuries for the most part, but he only started 12 games in the Premier League.

It was clear that he wasn’t the player he once was, and wasn’t trusted by Wenger as a starting midfielder.

Unai Emery joined as the manager for the 2018/19 season and Wilshere knew that his playing time would be significantly reduced under the new manager. This led to the midfielder seeing out his contract, which ended in June 2018.

There was interest from multiple clubs, such as Everton, Wolves and Juventus, but it was his boyhood club, West Ham, Wilshere decided to join. 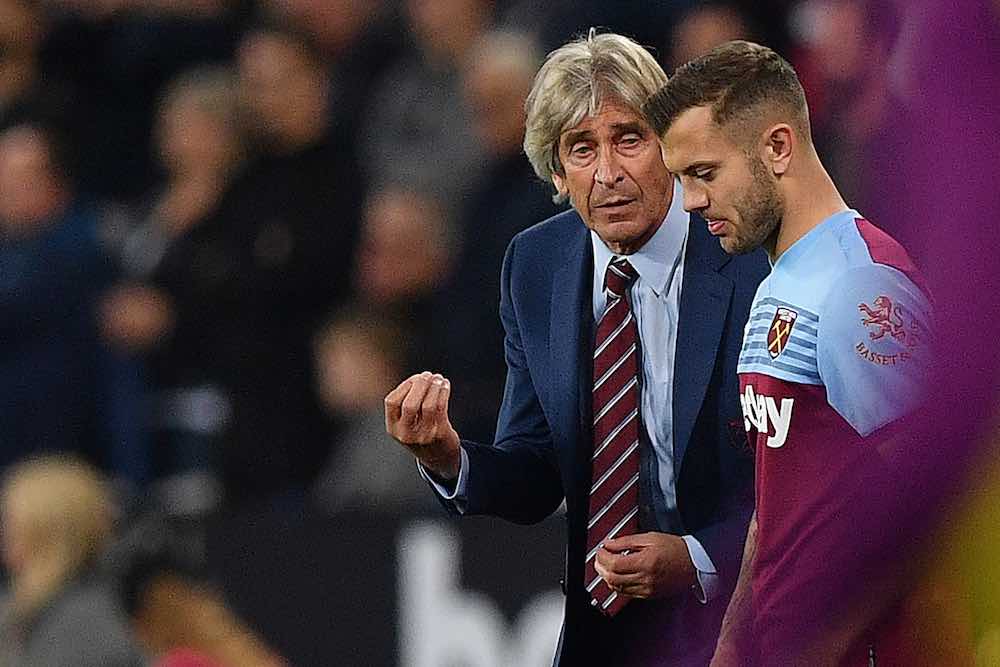 In an ideal world, this could have been where Wilshere enjoyed a few injury-free years while playing consistently at the top level.

But with only 16 appearances in just under two years with the Hammers, it has been far from ideal.

He suffered yet another ankle injury in September 2018 which required surgery. Apart from a 5-minute cameo against Newcastle in December, where he managed to assist a goal for Felipe Anderson, he did not appear for West Ham until April 20 against Leicester City.

2019/20 has been no different. He has been out with a groin injury since mid-October, and considering he is on £100,000 a week, it is likely that West Ham will not be holding onto him when his contract expires at the end of next season.

Wilshere has recently said that he has “unfinished business” at West Ham, and although it hasn’t worked out thus far, he “wants to change that”.

It is safe to say that many people would be glad to see Wilshere succeed in the latter stages of his career. He is still only 28-years-old and could potentially have a good spell at West Ham if he is to stay fit — that’s a big if, though.

It is almost 10 years since a 19-year-old Wilshere amazed the world with a dominating performance in midfield against Barcelona. Yet, it is clear to see that he has not fulfilled his once sky-high potential.

The footballing world was at his feet. Wilshere — and many Arsenal fans — must look back and wonder what could’ve been.