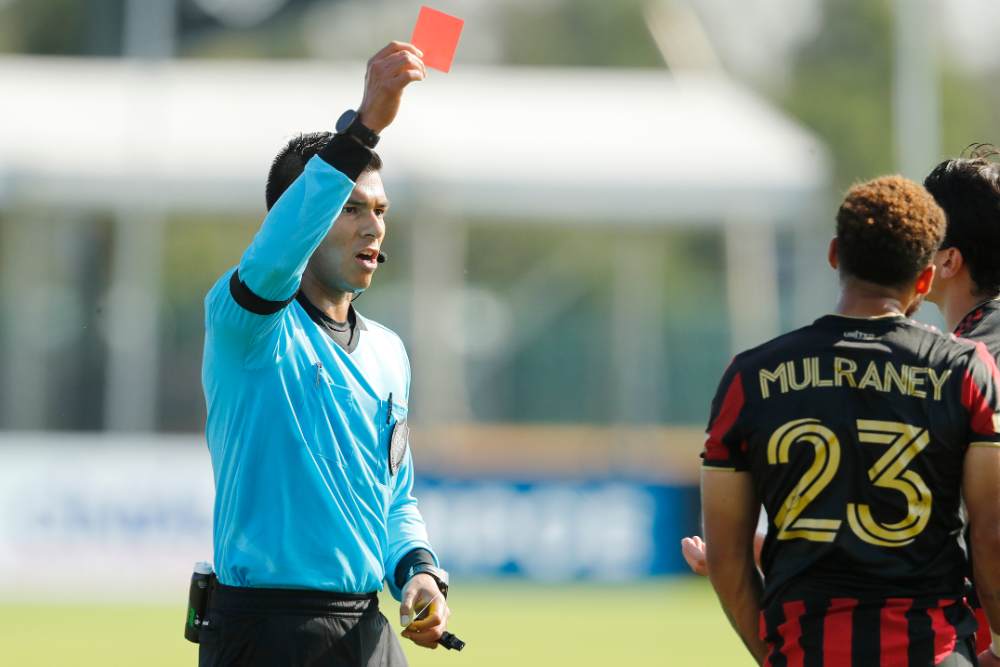 FC Cincinnati kept their MLS is Back hopes alive with a shock 1-0 win over Atlanta United on Thursday morning.

The Five Stripes were widely expected to put Jaap Stam’s side to the sword but things took a turn for the worse when Irish wing-back Jake Mulraney was shown a second yellow card for pulling down Joe Gyau during the first half.

Cincy still struggled to create chances despite the man advantage but found the breakthrough in the second half thanks to a brilliant long-range effort from teenager Frankie Amaya.

Atlanta debutant JJ ​​Williams was also shown a red card during second-half stoppage time as VAR picked up on the forward kicking out at Cincinnati defender Kendall Waston – although upon viewing, this looked incredibly harsh as Williams was, in fact, dragged down by the towering center-back.

Cincinnati now have a genuine chance of making the knockout rounds of MLS is Back while the Five Stripes’ hopes have been left in tatters, but who were the individual winners and losers of the match?

With Siem de Jong out of action and Haris Medunjanin very much charged with dictating play from deep, much of the onus was on teenager Amaya to provide Cincinnati with some attacking thrust.

Given Stam’s negative tactics and a lack of quality elsewhere on the pitch, this gusto came sparingly but when it did, it caused a ton of damage.

Amaya impressed on Thursday morning, completing 94% of his passes and constantly looking to pass forward to get Cincy going when so many of his teammates turned backwards or sideways.

And the 19-year-old was finally rewarded for his efforts in the 76th minute as he picked up the ball in front of a retreating Atlanta defence before curling a beautiful effort beyond Brad Guzan from well outside the box.

It was Amaya’s first-ever MLS goal, effectively sending Atlanta crashing out of the tournament and keeping Cincinnati in with a chance of progressing to the MLS is Back knockout rounds when all the odds seemed stacked against them.

With a host of players currently battling it out for that left-wing-back spot at Atlanta United — including George Bello and Edgar Castillo — it’s imperative that at the very least, you don’t do anything stupid when called upon in that position.

Jake Mulraney has been the man most often used so far this season by Frank de Boer but based on the evidence of Thursday morning, the Irishman clearly didn’t get the memo.

Having already been booked for a dangerous challenge early in the game, Mulraney was caught high up by a long Cincinnati ball behind the Atlanta defence.

Jake Mulraney is sent off the pitch for a foul. It’s his second yellow of the day. @ATLUTD now down to 10 men. #ATLvCIN | 0-0 | #MLSisBack pic.twitter.com/Zf8zrNXJfn

Trying to keep pace with Joe Gyau, Mulraney senselessly grabbed onto the USMNT international, dragging him down when he was heading for the Five Stripes’ penalty area. Atlanta had centre-backs coming across to cover and there was plenty of distance between Gyau and Guzan’s net to suggest Mulraney could have dealt with the threat without committing a foul.

A second yellow card was rightly shown, leaving Atlanta with a huge 55 minutes to fight on in the Orlando heat with just 10 men. Without this red card, you’d have to back the Five Stripes to eventually break down Cincinnati.

Perhaps the most important thing to say about this game – given the lack of on-field action – is what it means for the other two teams in Group E.

The Red Bulls beat Atlanta United 1-0 during their tournament opener, while Columbus Crew inflicted a damaging 4-0 Hell Is Real defeat over Cincinnati, making Thursday morning’s clash an absolute must-win for both sides. 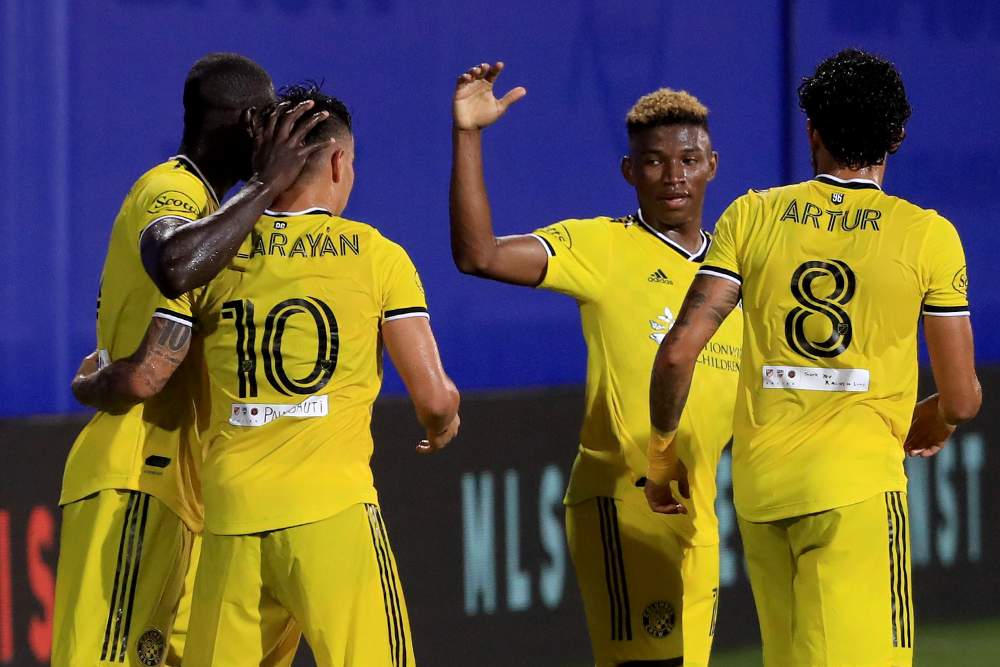 READ MORE: 3 Reasons Columbus Crew Are Among The MLS Is Back Favorites

With Atlanta losing to relative minnows Cincinnati, Red Bulls and Columbus will now be licking their lips at the prospect of getting another win on the board, sealing their progression to the knockout rounds with a game to spare. In fact, even a draw on Thursday evening would leave the pair ahead of Cincy, making it highly unlikely that either of them will be leaving Orlando prematurely.

Having put in a very respectable performance against the Red Bulls last time out – spearheading the Atlanta United attack and trying to make things happen where others struggled – Pity Martinez took a turn in the exact opposite direction against Cincinnati.

The former South American Player of the Year has divided opinion during his time in Georgia so far and on Thursday, he just wasn’t at the roots.

Whether it was tripping over his own feet or overhitting crosses, Pity just could not get his head in the game and time and again – his set-piece deliveries aside – the Five Stripes’ attacking moves broke down at his feet.

Pity wasn’t even allowed the full 90 minutes to register a meaningful contribution to the game, being replaced by JJ Williams late on as Atlanta went in search of an equalizer.

As always, Twitter was not kind as the Argentine struggled to exert his influence on the game:

Pity is not a morning person

Sure, the Dutchman has delivered US Open Cup and Campeones Cup titles, but his style of play has often left a previously exciting Five Stripes side looking cagey, lethargic and short on ideas – not to mention suspect defensively.

Their opening two showings at MLS is Back will not fill Atlanta fans with any more confidence that De Boer is the man to take the club forward. 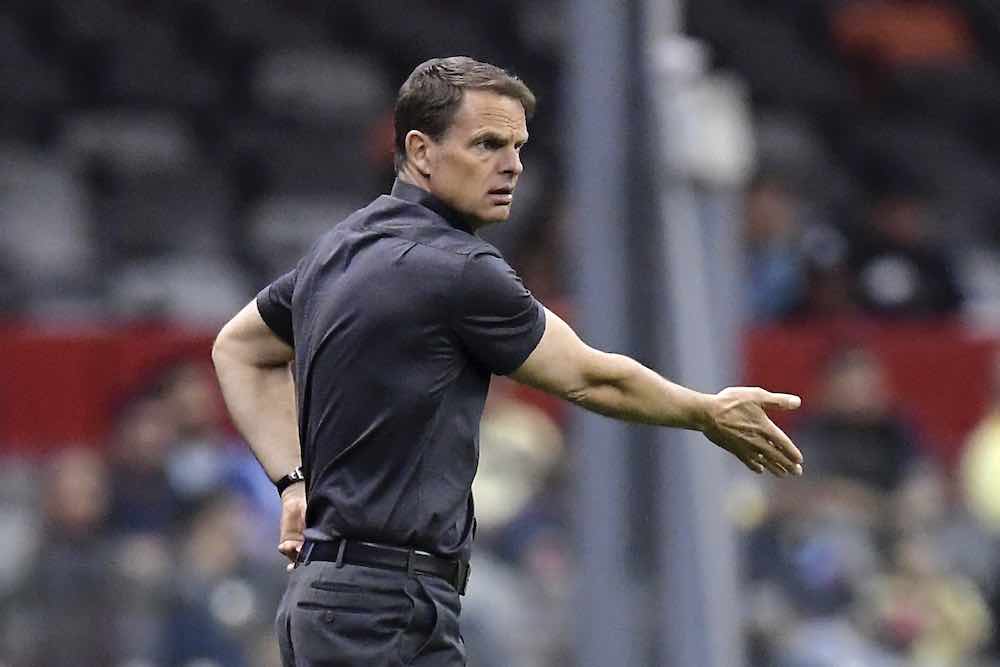 Against the Red Bulls, the Five Stripes found joy pushing their wing-backs forward but as a result, were caught short at the back by balls in behind — the space allowed to Florian Valot for his goal is simply inexcusable.

Things got even worse on Thursday morning. Yes, Atlanta spent a huge chunk of this match playing with 10 men – and then nine men later on – but even before that, they looked unable to break down what has been one of the worst MLS defences over the past year or so .

In fact, the Five Stripes actually improved somewhat following Mulraney’s dismissal but still, they were largely restricted to speculative efforts from distance with Cincy happy to soak up pressure.

Is it the system? Is it team selection? Or is it simply just the fact Atlanta cannot cope without the presence of star striker Josef Martinez? Those are questions for De Boer to answer. However, Atlanta United fans demand success more than most other supporters in Major League Soccer, so the Dutchman has to find those answers quickly.