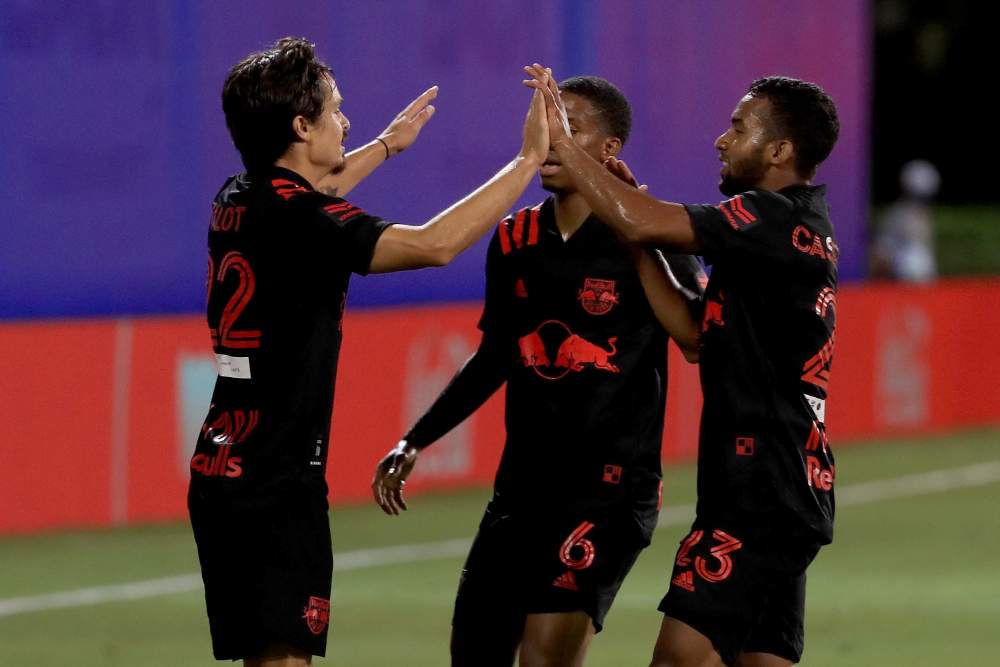 New York Red Bulls kicked off their “MLS is Back” campaign with a 1-0 win over rivals Atlanta United on Saturday evening.

After a lengthy weather delay, the game finally got underway in Orlando at 8:45 PM local time, but the setback didn’t seem to affect the Red Bulls, who came out the blocks fast and opened the scoring within four minutes through Florian Valot.

3 – @florian_valot has scored 4 goals in his @MLS career, including 3 in the opening 7 minutes of matches. His last 2 goals for @NewYorkRedBulls were scored in the 4th minute. Blocks.

Chris Armas’ men could have extended their lead further but Five Stripes goalkeeper Brad Guzan was on hand to deny Daniel Royer and Cristian Casseres Jr from close range.

Frank de Boer’s men should have found themselves level through Manuel Castro, but the Uruguayan blazed two golden chances high and wide during the second half, while David Jensen made a heroic last-minute save to deny Adam Jahn.

In the end, it was a well-deserved win for the Red Bulls, but what did we learn from the match?

1. Red Bulls Race Out Of The Blocks, Atlanta On The Ropes

Ahead of Saturday’s match, De Boer predicted his side would face a typically intense, energetic high press from the Red Bulls.

“It’s always an intense game,” he said. “They don’t give you any time normally when you have the ball, you always have to understand you’re always getting into a challenge, so we have to be prepared for that.”

Well, that’s exactly what they got. Right from the first whistle, the Red Bulls hunted in packs, harassing Atlanta in possession and giving their opponents absolutely no space to breathe.

With a static midfield still trying to figure itself out after the off-season loss of Darlington Nagbe, the Five Stripes struggled to cope, surrendering the ball with alarming regularity.

“Any time it drops to the six, that’s our trigger,” the pitchside microphones picked up Armas shouting to his players, clearly instructing them to target Mo Adams.

The Red Bulls deservedly opened the scoring after just four minutes with Valot finishing following a slick move and a beautiful pass from Kaku but questions simply must be asked of the Atlanta defence, too. Why was George Bello so high up? Where was Miles Robinson? Who was tracking Valot? Was Fernando Meza supposed to shuffle across to cover the space behind Bello?

As has become the case so many times over the years in MLS, the Red Bulls came out with a defined plan and within moments, had their opponents punch drunk and on the ropes.

Kaku may have split the Atlanta defence and Valot may have scored the winner, but it was the Red Bulls’ 20-year-old central midfielder Cristian Casseres Jr who really caught the eye on Saturday evening.

The Venezuelan youngster has been turning a few heads with the Red Bulls and on Saturday, he embodied all of the qualities Armas drills into his side: energy, intensity, skill and forward-thinking. 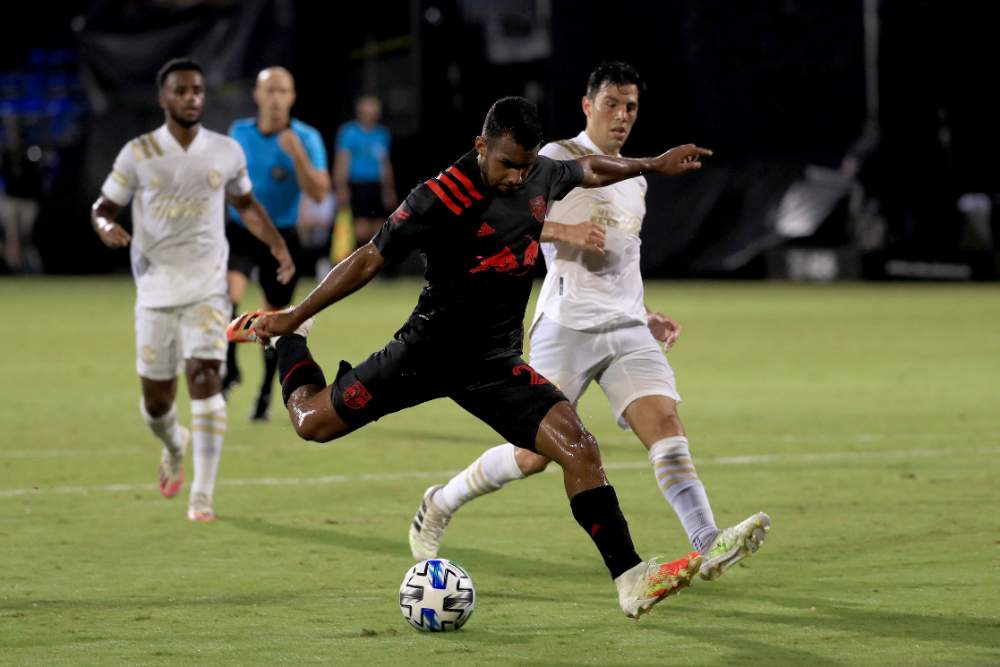 Casseres Jr almost found himself on the scoresheet just before half-time, charging into the box and being picked out by Tom Barlow, but was denied by a huge save from Guzan — one of a number of impressive stops from the Atlanta ‘keeper.

That didn’t tarnish his performance, however, with Casseres Jr making a monumental seven tackles, two clearances, one interception and completing 80% of his passes on the night. The former Deportivo La Guaira man was a controlling presence with and without the ball, leading the Red Bulls’ midfield into the press and showing great composure with his passing.

This was another impressive all-action showing from another South American youngster enhancing his game in MLS.

De Boer was very positive in the build-up to this match when it came to how his side would cope without star striker and talisman Josef Martinez.

“We can play with two 10s with [Ezequiel] Barco and Pity,” he said. “We can also play with Pity as a false nine. And with Barco up-front and Matheus Rossetto as an offensive midfielder. We can rotate a lot, two up-front, one up-front. So I have a lot of possibilities to use our players.”

During the first half, the Five Stripes lined up with a front three of Pity Martinez, Manuel Castro and Matheus Rossetto, with the latter lining up as a false nine. For a short time after the break, Castro moved more central and tried to provide a more direct goal threat.

Both were largely ineffective on the night with Rossetto often drowned out and isolated, bereft of meaningful possession, while Castro missed two absolutely golden opportunities to fire Atlanta level after good deliveries from Adams and Brooks Lennon. In all honesty, on both occasions, the ball came closer to landing in the team hotel than it did the back of the net. 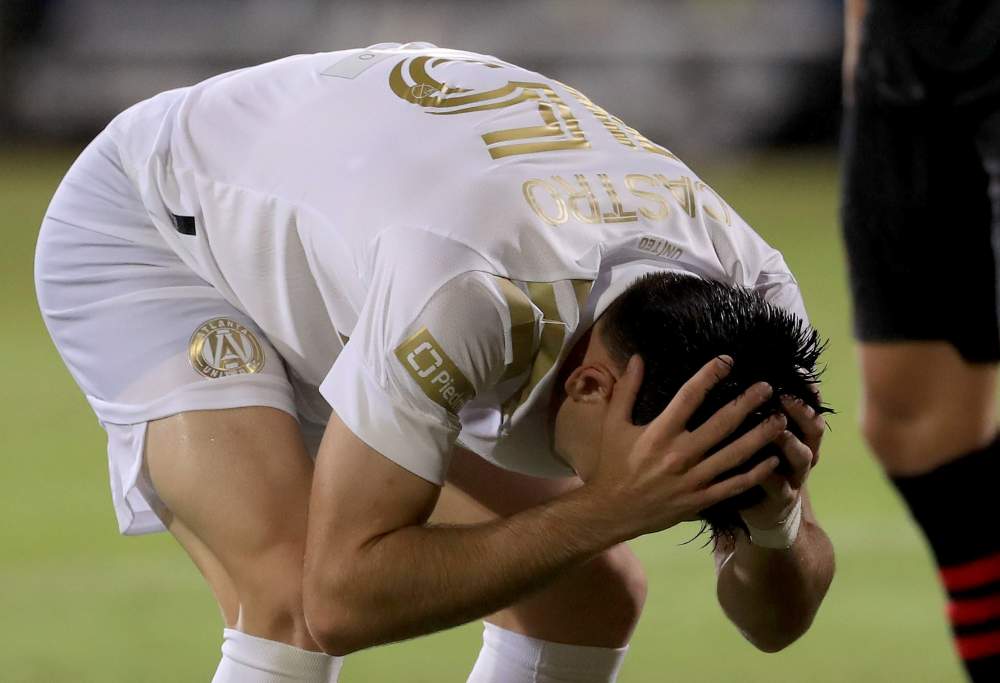 It feels almost predictable to say you’d fancy Josef Martinez to put those chances away but, well, that thought is simply unavoidable. The Venezuelan is Major League Soccer’s most ruthless marksman and both were chances made in his image.

The holes in Atlanta’s defence and midfield were there for all to see. However, it’s also true that the Five Stripes did manage to contain the Red Bulls for large spells in spite of that. What is most worrying is that Pity Martinez did create chances, the wing-backs did push up and deliver good crosses — George Bello, in particular, was a potent attacking threat on the left. But Atlanta had nobody at the end of the moves to put the ball in the net. In a condensed tournament situation, that could be their downfall.

Loading...
Newer Post
Helen Ward On Her Time With Watford Ladies, Wales And Facing Wendie Renard
Older Post
The Curious Case Of Kepa Arrizabalaga – The Burden Of A Price Tag And An Uncertain Future