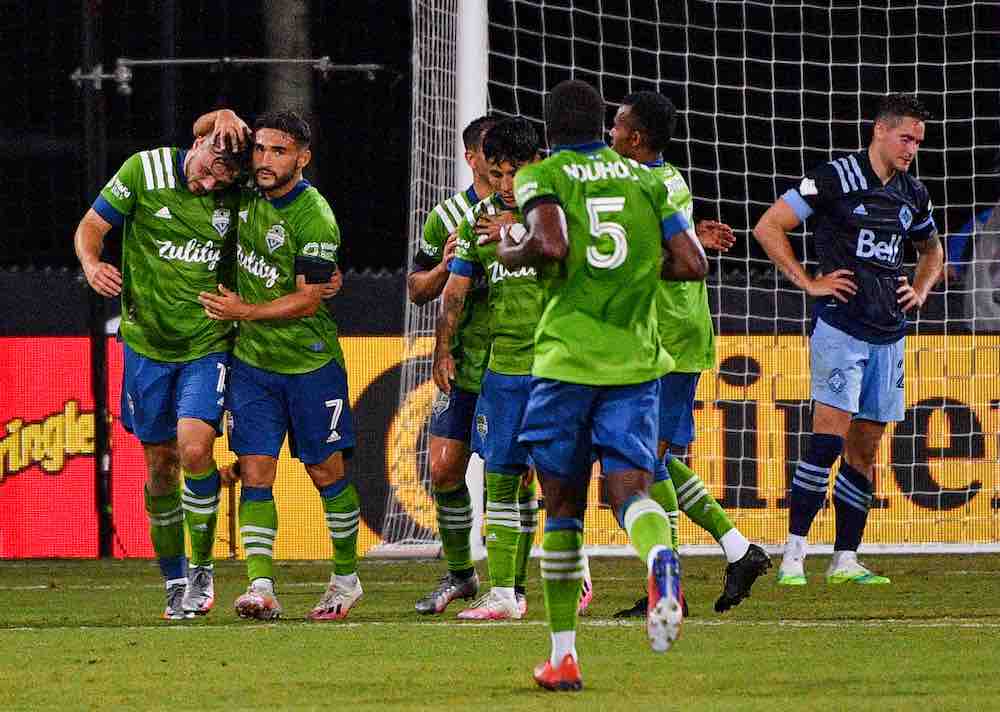 The Seattle Sounders secured their place in the MLS is Back Tournament Knockout Phase with a comfortable 3-0 victory against the Vancouver Whitecaps Sunday night.

Having lost their previous game, Seattle knew only a win would keep them in contention for a spot in the last 16, while Vancouver were looking to bounce back after their late downfall against San Jose Earthquakes.

Following a decent first 15 minutes for the Whitecaps, Seattle took over as Jordan Morris wriggled his way into the penalty area and deflected a shot off Tunisian international Jasser Khmiri, who was adjudged for a handball inside the box.

Nicolas Lodeiro, a member of Uruguay’s 2014 World Cup squad, stepped up and converted from the spot for his first goal of the season to give the Sounders the early lead.

It only went from bad to worse for the Whitecaps following the penalty.

In the 34th minute, midfielder Leonard Owusu turned the ball over at the halfway line, allowing Lodeiro to send Morris in behind for his team-leading third goal of the season.

The Sounders extended their lead at the start of the second half from a set-piece, as Raul Ruidiaz fired home from close range to give his side the 3-0 advantage and surely a spot in the Knockout Round.

Although it seemed like a pretty smooth performance for the Sounders, there were several important factors which helped them clinch the three points and shutdown Vancouver’s attack.

Here’s your @Delta Starting XI for tonight’s match vs @WhitecapsFC!

Sounders head coach Brian Schmetzer made three changes from the 2-1 loss to the Chicago Fire last week, with centre back Shane O’Neil stepping in for the injured Yeimar Gomez Andrade, as well as Morris and Handwalla Bwana replacing Shannon Hopeau and Miguel Ibarra out wide.

As for the Whitecaps, Marc Dos Santos opted to go with the same eleven he named on Wednesday against San Jose in a 4-2-2 formation, instead of his preferred 4-3-3 system.

Making Use of Possession

Although Vancouver found themselves with long strings of possession throughout the match, Seattle very much made use of the possession they had in key areas of the field and followed it up with numerous goal-scoring chances. 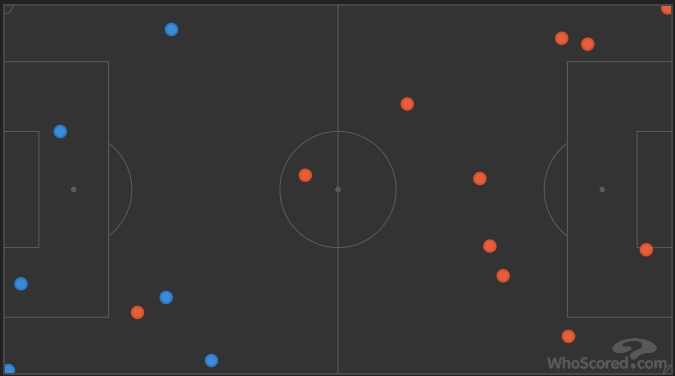 As seen in the graph above, the Sounders registered 13 key passes compared to the Whitecaps’ 6, with 77% of those coming in or around the penalty area.

A big part of the success in possession for Seattle was the play of Lodeiro, who was very much the focal point on the attack for the Rave Green and continued to show throughout the game why he’s one of the best creators in the league.

The Uruguayan finished with team-highs in key passes (4) and total passes (79), along with the penalty and the crafty assist for the second goal.

Give credit to Lodeiro for staying with Owusu the whole way, pressing up high and eventually forcing the Ghanaian to turn it over to create the break going forward.

Lodeiro’s performance not only showed how valuable he’s become to the Sounders, but also the presence the Whitecaps are missing in midfield at the moment.

At various points during the match, Vancouver found themselves in similar positions to Seattle’s second goal, where they’d press well, win the ball back but not find the option going forward.

South Korean international Inbeom Hwang was Vancouver’s most active passer with 82 in total, but none of those were into Seattle’s penalty area or deemed the title of a key pass.

The 23-year-old was expected to be the driving force in midfield for the Whitecaps when he signed back in January of 2019 but hasn’t been able to show his full potential for the Blue and White as of yet.

If the Whitecaps had a number ten playmaker in midfield with similar qualities to Lodeiro or if Hwang found better options going forward, they’d most likely take advantage of the long stretches of possession deep in opposition territory to create better goal-scoring chances.

Jordan Morris was a threat all match for the Sounders out wide.

Whether it was driving at Vancouver fullback Jake Nerwinski with pace or taking shots from multiple spots around the area, the US international came up big for the Sounders in a must-win game once again.

Morris, who was involved in all three goals, started on the bench last week against Chicago due to a small injury precaution but got the nod from the start on Sunday night.

The Seattle native began the game strong by winning the penalty in the 15th minute, dribbling through a pair of Whitecaps defenders and opening up space for the shot, which cannoned off the hand of Khmiri.

Morris then made a fabulous run in behind after Owusu’s mistake and caught up to Lodeiro’s wonderfully chipped pass to run in on goal, all while muscling off Nerwinski during a 40-yard run.

The US international wasn’t done there. He picked up from his excellent performance in the first half with an assist in the second as he flicked the ball across the Vancouver penalty area right into Ruidiaz’s path to make it 3-0.

Morris ended the game with a team-high five shots, two dribbles, one goal, and one assist.

Like Lodeiro, the 25-year-old’s performance showed exactly why he’s such an important part of Seattle’s attack, but also what the Whitecaps are missing out wide.

Although newly signed wingers Cristian Dajome and David Milinkovic have had their moments for Vancouver, they haven’t been as consistent taking defenders on 1v1 or making runs in behind, which translates to having problems in midfield as discussed in the previous point.

For Vancouver to be successful, Hwang needs the attacking players to stretch the field and make runs in behind, but the players out wide need to make use of the possession in the final third by taking on defenders or taking shots at goal.

37% of the Whitecaps’ possession came around the final third, with most of it coming out wide but not leading to any clear-cut goalscoring opportunities.

It’s clear to see the Sounders have quite the weapon in Morris, while the Whitecaps’ offensive struggles from open play continue.

Crepeau Picks Up An Injury

This point didn’t contribute much to the Sounders dominating victory, but it could be a worry for Whitecaps fans as Canadian international goalkeeper Maxime Crepeau left the match in the 58th minute after a collision with Handwalla Bwana in the box.

Crepeau seemed to damage his left hand in the process and was forced to be replaced by 21-year-old Homegrown Thomas Hasal, who made his professional debut.

The youngster was tested right from the get-go, making two neat saves three minutes after coming on to prevent the Sounders from extending their lead.

“He came in well. He did his job when he came in,” said Whitecaps head coach Dos Santos after the game. “He was focused. Of course, he was a little bit nervous for the moment, it’s his first MLS minutes.”

Despite the negatives, Dos Santos added it’s a positive to have Hasal have his moment in this type of environment and he only hopes the youngster learns from his first MLS experience.

As for Crepeau, the Whitecaps have yet to provide an update on the extent of his injury, so it’s unknown whether he’ll be available for the club’s final group game.

Should the Canadian be out for a while, he could be a big miss for Vancouver at the back.

Up next for the Whitecaps is their final group game against Eastern Conference side Chicago Fire on July 23rd, while the Sounders will sit back and wait for their next opponent in Knockout Round.