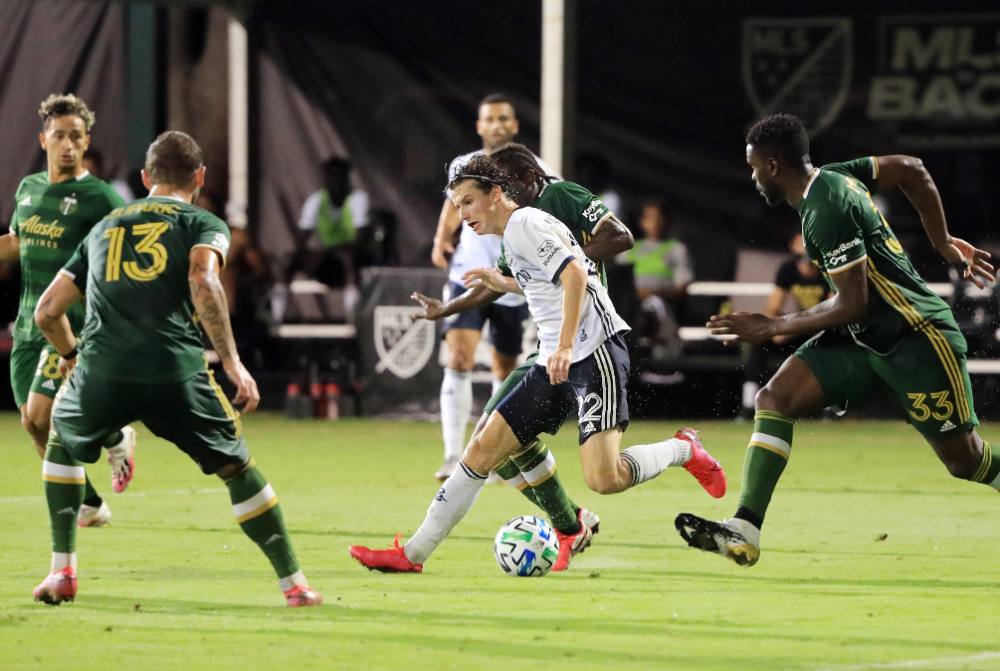 Philadelphia Union may have exited the MLS is Back tournament at the semi-final stage, but the past month down in Orlando has been far from a disappointment.

Jim Curtin’s men went into the tournament with relatively low expectations given the quality at the disposal of the sides around them, but shocked many with victories over the likes of New York City FC and Sporting Kansas City to reach the final four.

The likes of Sergio Santos — despite his penalty miss against Portland Timbers — and Andre Blake caught the eye for the Union, while usual suspects Alejandro Bedoya and Raymon Gaddis turned in high-level performances but for one youngster who has been making waves for Philadelphia, MLS is Back was another landmark competition of promise. We’re talking about none other than Brenden Aaronson.

The 19-year-old playmaker has been turning heads in North America for some time now having clocked over 1,800 minutes across 30 MLS appearances for the Union last season, as well as making his senior USMNT debut against Costa Rica in January.

Although he only managed one assist during that time, Aaronson did net three goals, while the teenager also averaged 1.07 chances created and 3.43 take-ons attempted per 90 minutes. The Union clearly had a talented player on their hands who didn’t fear taking risks and trying to make things happen in the final third, but obviously needed to refine his game to become more effective.

Fast-forward to 2020 and Aaronson has already upped his take-ons attempted to 5.23 per 90 — completing 3.92 of them — while weighing in with a goal and two assists so far, doubling his tally from last season for the latter.

The vision and technique he displayed in assisting Santos during the 3-1 quarter-final win over Sporting Kansas City was particularly impressive as Aaronson turned out of pressure from two opponents before delivering a defence-splitting pass perfectly into the path of his striker from his preferred inside-right position.

It was a moment few in MLS are capable of, let alone a teenager, and came not too long after Aaronson had already torched Luis Martins in a one-on-one situation before firing a shot agonisingly wide of Tim Melia’s far post.

Martins wasn’t Aaronson’s only victim in duels during MLS is Back, with the 19-year-old also racing past Will Trapp during the early exchanges of the Union’s 2-1 group-stage win over Inter Miami. Once clear, Aaronson cut the ball back across the box and although it took some lucky deflections along the way — robbing Aaronson of the assist — it did reach Kai Wagner to fire home, giving Philadelphia a 1-0 lead. Aaronson was once again the instigator during the second half of that match, leading a lightning Union counter-attack before slipping a pass to Kacper Przybylko who checked inside and delivered the winning goal.

Amid links to a number of Bundesliga clubs, as well as Scottish champions Celtic, German outlet Bild have described Aaronson as the “US Havertz”. After the win over SKC, Curtin was frank in his assessment, lavishing praise upon his young talent, but urging fans to enjoy Aaronson while they can as the Union will likely succumb to an offer sooner or later.

“When some players tend to shrink in big occasions, he tends to raise his level and then raise his game,” the Union head coach said.

“So I don’t know how long I’ll get to coach him for, how much longer, but I’m going to enjoy every day.”

It’s all well and good being in awe of a teenager offering up moments of brilliance even seasoned veterans of the game cannot conjure, but a huge indicator of a young star’s ceiling and ability to develop lies in how he responds to in-game adversity.

For a creative midfielder, adversity doesn’t come in much tougher forms than Portland Timbers veteran Diego Chara, a No.6 with an almost immeasurable number of scalps to his name thanks to his innate ability to shut down the opposition’s star players, break up counter attacks and dictate the pace of a game to his side’s needs.

As you can see from Chara’s heatmap below, from Twenty3, Timbers boss Giovanni Savarese had clearly highlighted Aaronson as the Union’s danger-man for their MLS is Back semi-final clash, putting his midfield destroyer right into the space in which the American youngster operates.

However, as you can also see from Aaronson’s own heatmap from the match, he was quick to respond to this tactical ploy, moving across to the inside left where he could try to get some change from the much less experienced Eryk Williamson.

Aaronson was able to complete two dribbles and create one chance on the night, receiving the ball on the turn having intelligently picked up space between the Timbers’ defensive and midfield lines before slipping a smart ball into the path of Przybylko, who scuffed his finish into the hands of Steve Clark.

The Medford, New Jersey-born playmaker should have picked up a pre-assist in the 79th minute when he cut inside onto his right foot to evade pressure from Chris Duvall before sending a pinpoint pass into the path of Andrew Wooton who moved the ball onto Przybylko. However, the Polish striker’s effort was once again fired straight at Clark when he really should have found the back of the net.

Furthermore, Aaronson thought he’d notched yet another assist and helped the Union grab an unlikely equaliser when he slipped past Chara with an exquisite turn before charging into the Timbers’ box and sending a reverse ball to Przybylko. This time, the 27-year-old was able to finish but was denied by the tightest of offside calls.

Sure, it wasn’t Aaronson’s greatest game having only managed 35 touches of the ball all night. However, coming up against Chara, most No.10s find themselves marginalised and the fact that Aaronson was able to adjust in-game and still find some defining moments shows wonderful promise for a 19-year-old.

What Next for Aaronson?

There is little time for Aaronson to rest on his laurels with the Union facing New England Revolution on August 22nd as the MLS regular season resumes.

However, while the 19-year-old has continued to show the flashes of brilliance which defined him during 2019, this season, he’s added end product in the final third and is now stepping up with defining moments for his side.

The more he does this, the more teams from Europe will be circling for a chance to win his signature. For Aaronson, the Philadelphia Union’s youth system, Major League Soccer and soccer in the United States as a whole, this can only be seen as a huge positive.

Loading...
Newer Post
The Sky Is The Limit For Serge Gnabry At Bayern
Older Post
Nicolas Anelka Netflix Documentary Shows The Lure Of The ‘Misunderstood’ Maverick