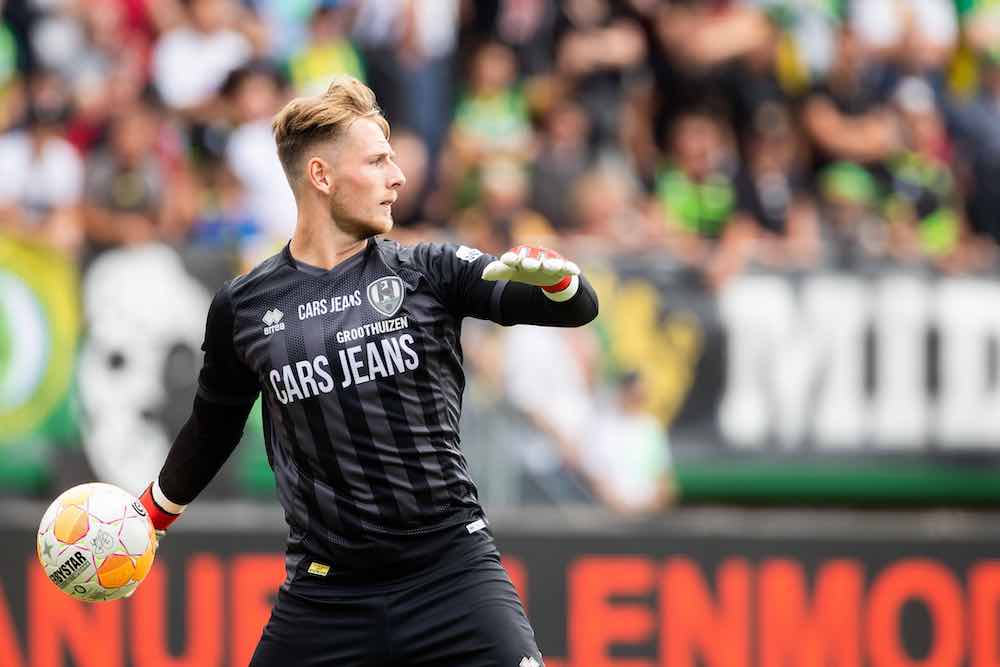 James Rowe spoke to Vejle Boldklub’s Dutch goalkeeper Indy Groothuizen for WFi. They discussed his move to Denmark, his time with the Netherlands youth teams, and the best players and coaches he’s worked with.

You signed for Vejle Boldklub in 2019. How are you enjoying your time at the club so far and how would you describe the club?

“Vejle Boldklub are a club with a very rich history. In the not too recent past, they were competing to win the Danish Superligaen which they won a few times, and such success has meant that they have many supporters and that they are a big club in Denmark.

“At this moment in time, we are in the Danish First Division. The club is owned by a Moldavian and Danish businessman which means that we are the only club in Denmark that is foreign-owned. The directors and staff in the office are all Danish and we have a Romanian backroom staff so it is a different environment to what I am used too.

“We have many cultures mixed together and which has lead to an unbeaten 14-game run which resulted in a great atmosphere around the club. We hope to become champions and gain promotion to the Danish top flight. I am enjoying fighting for a domestic league title for the first time in my football career.”

You played two seasons for ADO Den Haag. How do you look back on your time at the club and do you have any particular highlights or memories?

“My time at ADO Den Haag was really educational. I came from the youth setup at Ajax. I did not hesitate to sign for the club as I got a really good feeling when I spoke to the club about signing for them. The manager at the time was Alfons Groenendijk who I knew from my time at Ajax and the goalkeeper trainer Raymond Mulder were clear in their reasons for wanting to bring me to the club.

“I remember a key point was playing in a friendly match during the winter break and showing everyone what I can do and shortly afterwards I made my debut for ADO Den Haag in the Eredivisie due to an injury the number one keeper Robert Zwinkels.

“I managed to play seven consecutive matches and I was also called up for the Jong Oranje which was a great way to finish that season after extending my contract and becoming the number one goalkeeper.

“At the start of that season, ADO Den Haag were very inconsistent and I made a blunder in an away match against FC Utrecht and there was a lot of attention and pressure on me after that. ADO Den Haag have a lot of passionate fans who took to social media to criticize my mistake and my performances and comment on the fact that I am from Amsterdam and that I have the emblem of the city tattooed on my arm.

“I ended up being booed by the fans at home and away games and that lead to conflict where I ended up receiving professional help. It was completely new for me at that time to experience such things as a professional goalkeeper. It was difficult for me to come back from such an experience but I knew I had to let it go at some point.

“After returning to the first team again and playing well it was a sort of confirmation that I managed to put it behind me and get back to playing well again. I went through a lot in my two years at ADO Den Haag which many highs and a few lows. It was a massive learning curve for me as a professional footballer.”

You mentioned the Jong Oranje and you have been capped by the Netherlands at youth level in different categories. How do you look back on representing your country and what are your highlights and memories?

“I started out on the road to youth international football with the KNVB regional teams and then I went to Ajax. I represented the Netherlands from the age of 15 in every category apart from one, with my highlight being capped for Jong Oranje, as you see what it is all about. The matches are live on Dutch television and you see how close you are to the Dutch national first team.

“You see in recent years that there are many players from Jong Oranje who have gone on to play for the Dutch national team. I even scored in a friendly match against the Czech Republic coming up for a corner and that goal went viral on social media.

“I even received calls and attention from newspapers from different parts of the world. We also played matches in South America in Bolivia and Paraguay. You fly around the world a lot with Ajax at youth level but I had never been to such countries so it was very special to experience a different culture. My two caps with Jong Oranje against Latvia and Ukraine are great to reflect on and something I am proud of.”

You have accrued experience at club and youth international level. Could you say who are among the best players you have played alongside so far in your career?

“When I played in the Ajax youth setup at the age of 19, a 14-year-old Matthijs de Ligt came to train regularly with us and you could see that he was a player that had skipped four youth categories, and he was even then very mature for his age. Much more further on as a player than players of his age, and I was really impressed with him.

“When he reached the Ajax first team he was playing the same way then as when he played with us in the under 19 team.

“Frenkie de Jong arrived from Willem II and he trained six months with Jong Ajax and you could see that he was an extraordinary talent in terms of receiving the ball and how intelligent he was.

“I would also like to mention Abdelhak Nouri. We played together from the ages of 15 -20 and you would be in pure amazement in the things that he could do in training and in matches.

“Another player is Stanislav Lobotka who recently signed for Napoli from Celta Vigo. We played together during my loan spell at Nordsjaellend in Denmark. Before that he was on trial at Ajax from AS Trencin. He is similar to Frenkie de Jong and Abdelhak Nouri in always challenging his opponents.

“During my time at Jong Oranje I played with the likes of Riechedly Bazoer, Kenny Tete, and Jaïro Riedewald and we had a great time playing and training together. You could see that they were consistent and that such a quality would bring them far in their professional careers.”

I can imagine in your position as a goalkeeper that you have come up against many difficult opponents through the years. Are there any that stand out for you?

“When I was at ADO Den Haag and we would often perform well against Ajax. When you are a player of Ajax yourself you do not realize it but when you face them as an opponent you see how dominant they are.

“At a training camp in Turkey, we faced Besiktas and we drew 2-2. That was my official debut in the first team. We played well in that game in the first half, but when their stars came as substitutes in the second half the tempo went up a notch and it gives you a reality check as a player in terms of the class players that they have.

“I remember playing at home against AZ Alkmaar in the Eredivisie in my first season at ADO Den Haag and they had the likes of Alireza Jahanbakhsh, Wout Weghorst, and Steven Berghuis, and we were well beaten 3-0 and they played in a very dynamic way.

“I also remember playing in youth tournaments at club and international level and facing many good opponents.”

Finally, Indy, could you say who are the goalkeeping coaches and managers that have played a key role in your development as a professional footballer? 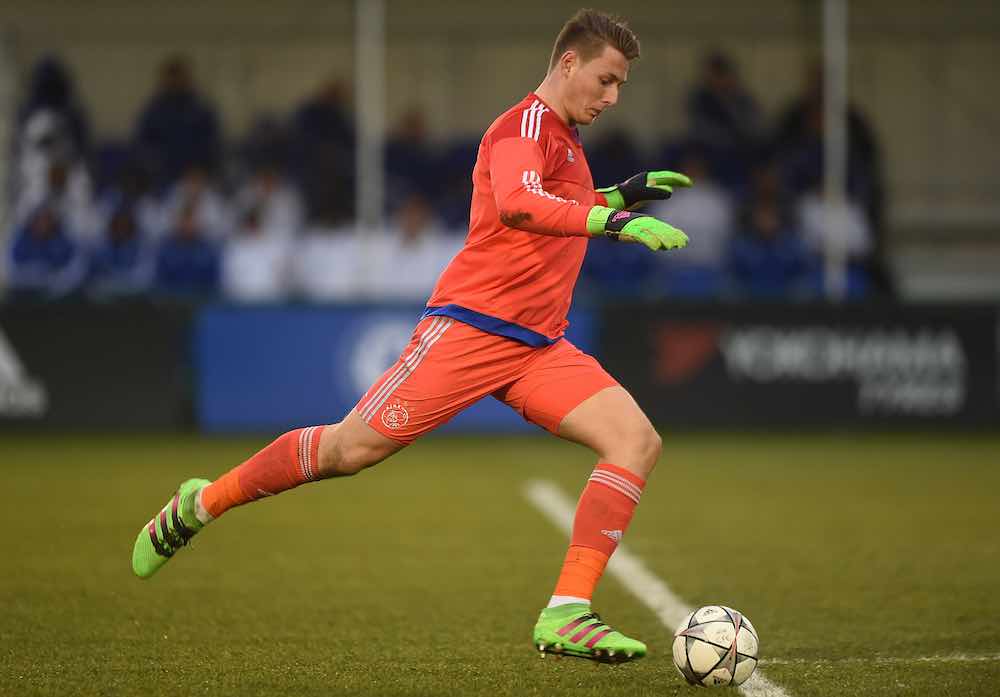 “I have been fortunate to have got on well with all the coaches and managers that I have played under and in a way they have all contributed to my development at some stage in my career.

“At Ajax, I had a goalkeeping coach in Rene Stam who is still on the bench at Jong Ajax. When I arrived at the club in the beginning I did not really stand out. Under his tutelage, I managed to come into my own and eventually go on to train with the first team.

“During my time at Nordsjaellend, my goalkeeping coach was Henrik Ipsen who left after six months for a new challenge in China. He was a real father figure for me when we worked together.

“Then I worked under a new goalkeeping coach, Iñaki Caña. He is, in my opinion, the best goalkeeping coach in the world. At that time he only spoke in Spanish but we managed to communicate well. He training methods were so well thought out with so much creativity in the way in which he worked and also training on how the ball can quickly change direction. He could do everything.

“After his time in Denmark he moved on to Brentford FC and he is now goalkeeping coach at Arsenal under Mikkel Arteta. I am pleased for him that he is starting to get the recognition that he deserves and also along with his much-viewed YouTube channel. He is by far and away the best goalkeeping coach I have ever had.

“I respect and appreciate all the goalkeeping coaches I have had but he really stands out. I would also like to mention Raymond Mulder at ADO Den Haag. We worked really well together and we could speak about many things both on and off the pitch, and he was important to my development and we still have contact.

“I also get on well with my current goalkeeping coach here at Vejle Boldklub. Sierd van den Berg at Jong Oranje was also very important during my time representing the Netherlands. He is a special person. We still have contact almost weekly. He is really studious when it comes to the art of goalkeeping and we often had interesting talks because he was so open in giving advice and I would learn from him.

“I am improving my communication skills every day in terms of language and culture, and I believe if you are open to working in such an environment you can only improve as a player both on and off the pitch.”