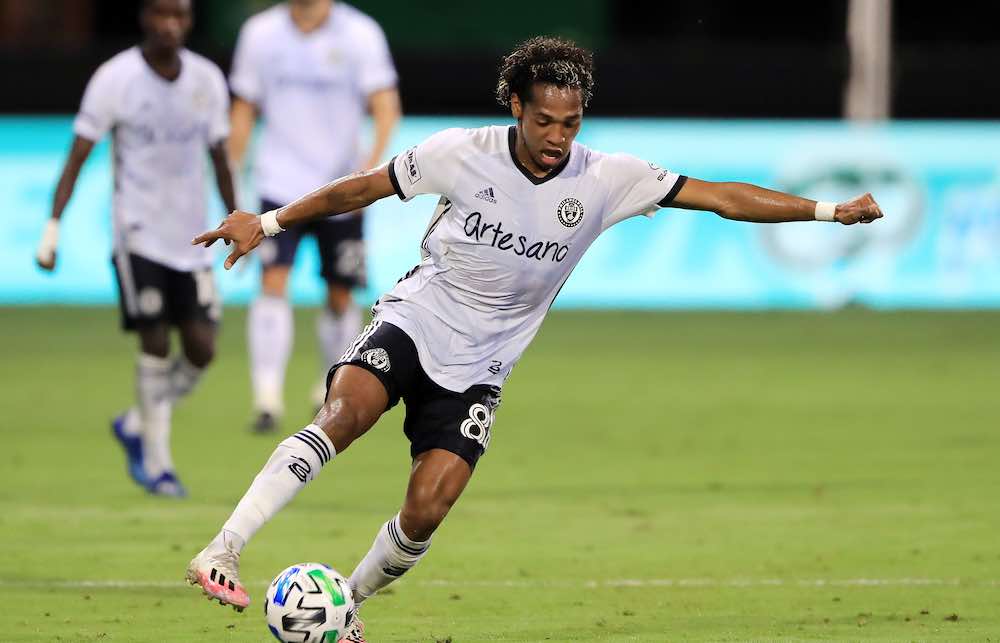 Few players have made as much of a landing impact on Major League Soccer this year as José Andrés Martínez, otherwise known as el Brujo (the Sorcerer). He joined Philadelphia Union at the beginning of 2020 from Zulia FC and made his first start pre-lockdown in a 3-3 draw with LAFC.

The Venezuelan really found his feet, though, during the MLS is Back tournament. He started in two of Union’s group stage matches and all three of their knockout stage games, only missing one match due to a yellow card suspension.

Martínez’s best matches statistically were against New York City FC and Sporting Kansas City, both considered established MLS powers. Playing as a defensive midfielder, as shown in the passing network below from Twenty3, Martínez managed 22 accurate passes against NYC in addition to winning eight duels and making five recoveries. He managed 50 touches over the 73 minutes he played and helped them to a 1-0 clean sheet victory.

Martínez played the full 90 minutes in the Sporting KC matchup, making 32 accurate passes, 64 touches, winning 12 duels, and nine recoveries. That match ended in a 3-1 win and set the Union up for a semi-final appearance. Oddly enough, the stats don’t reflect the key to Martínez game. 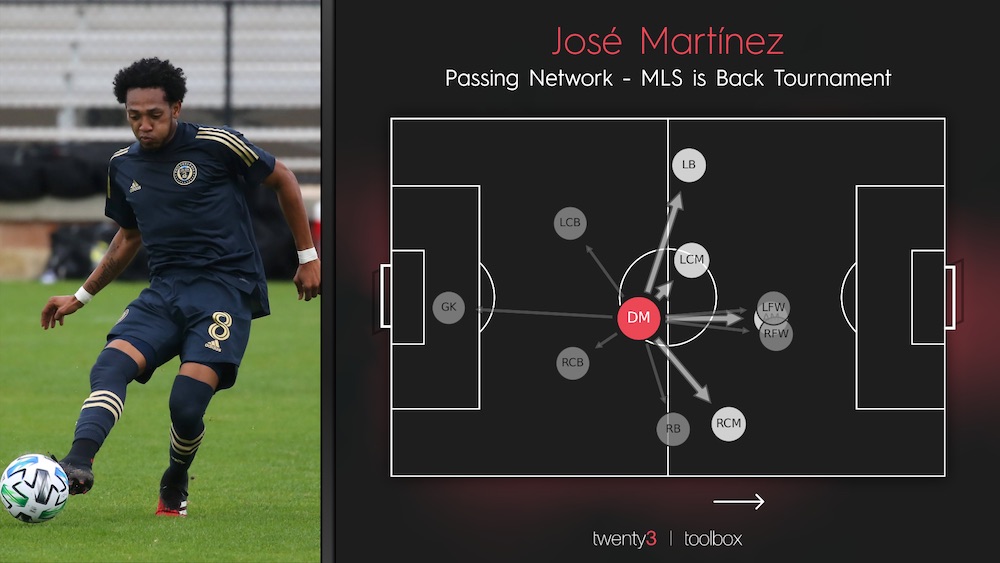 The Maracaibo-born midfielder is an extremely physical player, even by the standards of those trained on the pitches of the Venezuelan professional scene which often features tough play.

In his opening match against LAFC, he received a gash across his upper lip. He played through the injury and eventually showed he could deal a bit of damage himself. While his play hasn’t resulted in wounds like this, he did receive three yellow cards in five games at the MLS is Back tournament, and has widely been reported as a tough, tactical, foul-making midfielder!

For his efforts, Martínez was one of seven Union players nominated as options for the MLS is Back Best XI. With Josef Martínez out with injury and many other Venezuelan players still working toward winning spots in their respective starting XI’s, José Martínez finds himself one of the league’s best performing Venezuelans in 2020.

The select XI will be announced on Thursday & is based on media vote. ☑️ pic.twitter.com/iKI0TQcpXp

In conjunction with FutVe English, a project that seeks to provide the best coverage of Venezuelan football in English, I briefly interviewed Martínez on his new home and his roots in Maracaibo.

On the topic of his tough style, Martínez was clear that he makes no attempt to hide his style, but also sees no need for it to be judged beyond the immediate need found by the referee.

“I have always played like this and that is why I have described myself as a tough player, but I have nothing to say about the refereeing,” he said.

“The referees do their job and I do mine without any problem. It’s clear to me that I have received many yellow cards in a short time. I’ll try to work on that and take better care of myself.”

Martínez’ identity is key. He was born in Maracaibo, the capital of the state of Zulia, and has played for two of the city’s clubs, JBL Zulia and Zulia FC.

With Zulia FC, he won the Copa Venezuela in 2018 and made a historic run in the Copa Sudamericana, South America’s Europa League equivalent, in 2019. That year, Zulia reached the quarterfinals of the competition and became the first Venezuelans to do so. El Brujo was a key part of the campaign. Along the way, Zulia and Martínez became just the second foreign side to beat Nacional Potosi at their high-altitude stadium in Bolivia. Martínez assisted the game’s winning goal.

For Martínez, his legacy in Zulia is as key as any other achievement in his career. While he is now making headlines in the United States, the Union are far from the only important chapter in his life.

“For me, Maracaibo is very important, not only because I played there,” Martínez continued. “If not because I was born and also because of what I was able to achieve in a short time.

“I feel very good because I think that since I arrived in Zulia, I was able to develop my football. I was able to make myself known and I was able to play in the Copa Sudamericana and reached the quarter-finals, which no Venezuelan team has done before.”

It is a matter of fact, however, that el Brujo is now far away from Zulia and his former club. The Union are his new home and one that’s set to provide new challenges, something the midfielder seems well aware of. His goals, however, seem quite clear, as does his appreciation for the team.

“I felt strange when I got here because I had never seen so many good things together but for me it was important to arrive at the club and that they received me in the best way,” he says. “I feel very grateful to the Philadelphia family for all things that they have given me.”

In addition to his efforts on the pitch, Martínez has gained a strong reputation on social media. The Philadelphia Union have frequently posted videos, photos, and graphics celebrating the new arrival. Posts range from references to his magical nickname to videos of him dancing before games.

On the matter of his dancing, Martínez mentioned that while it did indeed help him get focused for the game, he didn’t want to it to be interpreted as a sign he didn’t take his job seriously.

“I show joy and much respect,” he explained. “Dancing and singing helps me stay focused and I feel confident to be able to do what I really want and have in mind. But it’s always with respect.”

Fernando David Prieto Garcia, a journalist and member of the popular Venezuelan football news source Once Futve, notes that Martínez’ success with Philadelphia was previewed by his immense impact with Zulia FC.

“José Martínez’ role was very important and vital for [Zulia’s] operation… he is a versatile player,” Garcia explained.

“In Zulia he was sometimes seen in games lining up in the central defence, but his position is what everyone knows, performing in the core of the field.

“He is a player with a defensive bearing but with projection to attack. One of the most outstanding functions of his game is the take-offs.” 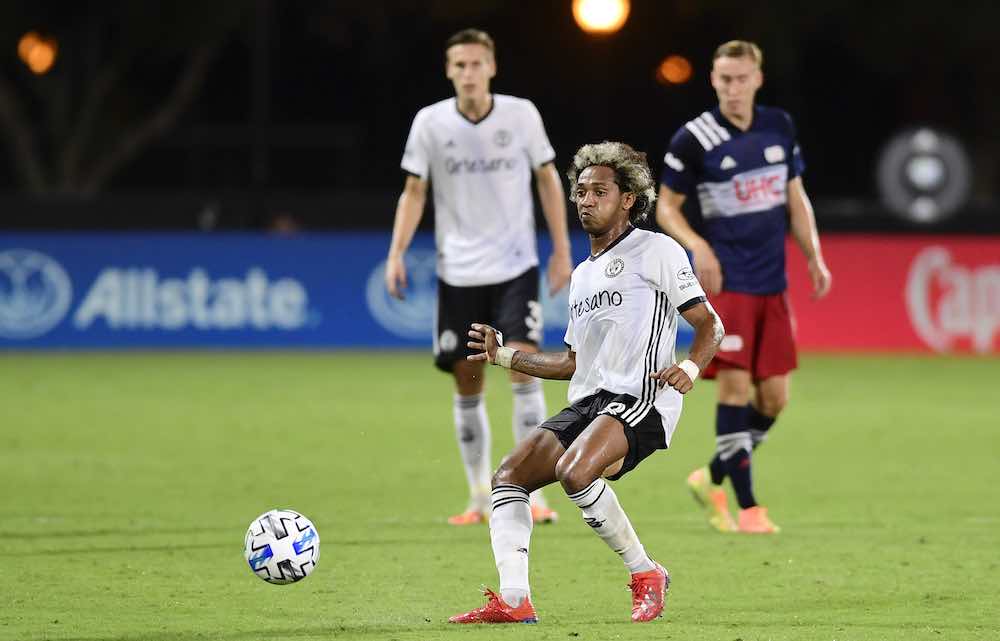 Garcia continued further on Martínez’ mentality — a key part of his game.

“He is a player with a strong character on the field, a guide, with great grit,” he adds. “On his arrival at Zulia I did not doubt his quality, he is a player who had been looking for an opportunity for a long time and knew what he was made of.

“He was champion with the U-20 team of Zulia FC along with players like Jefferson Savarino and Andrés Montero, so his departure from the team was only a see you later at that time. He is one of the most beloved players in the history of Zulia FC.”

Garcia added that while la Vinotinto, Venezuela’s national team, already have several notable defensive-minded midfielders in the likes of Tomás Rincón and Yangel Herrera, both currently playing in Europe, Martínez could still have potential within the team.

“In the national team he can be a good option or alternative,” Garcia continued. “He is a player who adapts to the different schemes.

“I think he is one of the best players in the country in his position, and he is a young player. He’s already been looked into and I believe that he could be a good variant in the selection for the different fronts that lie ahead in the future.

“We are clear about who are the incumbents in those positions but without a doubt, Martinez can be a good option.”

The remainder of the heavily adapted MLS season awaits el Brujo and the Philadelphia Union, but there is little doubt that the Venezuelan midfielder will be one of the names to watch when the team finds its way back on to the pitch.

If Martínez and his teammates can live up to the standard forged in their MLS is Back campaign, he may well find himself in contention for a call-up, with la Vinotinto heading into 2021 with both World Cup qualifying and the Copa América in their wake.

Until then, el Brujo can be found casting his spells across the stadiums of North America, providing lessons in both the shining pathways of attack and the dark arts of defending.

Loading...
Newer Post
Under Ben Bulben: Neymar And A Saga Of Resurrection And Immortality
Older Post
Jesse Marsch: Where Next For The American Coach Given Wings By Red Bull?