Orlando City 3-1 Minnesota United: Nani Rolls Back The Years As Lions Reach MLS is Back Final 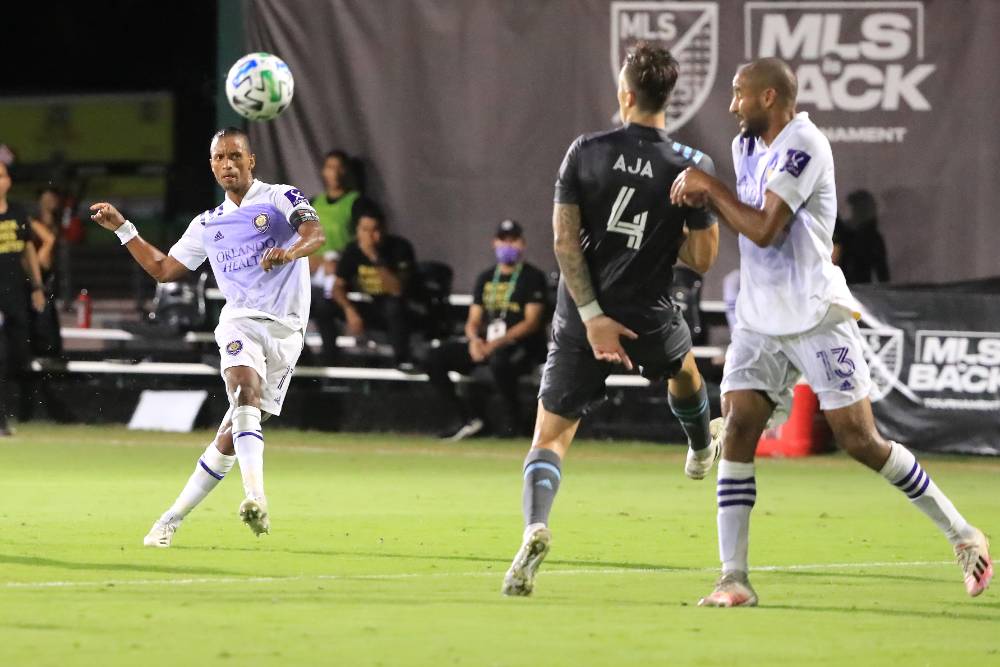 Orlando City booked a date with the Portland Timbers in the MLS is Back tournament final with a 3-1 win over Minnesota United on Thursday night.

After adverse weather conditions delayed kick-off by over an hour, Minnesota came out with a similar energy and intensity which helped them see off San Jose Earthquakes in the previous round, pressing Orlando high in a bid to force mistakes in dangerous areas.

However, they couldn’t make their pressure tell and it was Orlando who struck first on 36 minutes as Nani wonderfully controlled a pin-point long pass from centre-back Robin Jansson before holding off Hasani Dotson and finishing beyond Loons’ goalkeeper Tyler Miller.

WHAT. A. BALL.@luisnani with a great touch and finishes it for the 1-0 lead! #ORLvMIN pic.twitter.com/Vq57R1C7tM

Minnesota attempted to mount a comeback after the break, forcing no fewer than X corners and calling Orlando ‘keeper Pedro Gallese into action with a number of dangerous efforts. The Loons’ pressure finally told when young forward Mason Toye finished a smart through-ball from Kevin Molino in the final 10 minutes, but it all came a little too late for Adrian Heath’s men, who were finished off by a Benji Michel goal on the break during second-half stoppage time.

Orlando will now begin preparations for their final match-up against the Timbers on Tuesday but before then, what did we learn from this match?

1. Nani Rolls Back The Years

Nani has undoubtedly been Orlando City’s best player since he joined the club from Sporting CP last year — there is little debate around that statement. However, the Portuguese’s form has still been patchy at best, with Nani often struggling to carry a side which has continued to flounder in MLS.

However, this tournament has seemingly seen Orlando finally discover themselves — with a little help from coach Oscar Pareja — and with that, we’ve seen Nani show fans what he can really do.

Ahead of Thursday’s match, Nani had already managed four direct goal involvements during the MLS is Back tournament, scoring once and assisting a further three strikes, with each coming in the second half of matches. This time, he didn’t wait around to make his presence felt.

As mentioned, his first-half brace was truly a sight to behold as the 33-year-old twice showed the wonderful control we all remember him possessing during his Manchester United days before beating the much younger Dotson and unleashing two very different but equally impressive finishes beyond Miller in the space of just six minutes.

1 – @luisnani scored a first-half brace in a club match for the first time since April 7, 2010, with @ManUtd against @FCBayernUS in a @ChampionsLeague quarterfinal. Vintage.#MLSisBack pic.twitter.com/DFAc6zWS6y

It’s the first time Nani has managed a brace during the first half of a club match since scoring twice during the opening 45 minutes of a Champions League quarter-final clash between Man Utd and Bayern Munich back in April 2010 and in all honesty, it was a wonderful throwback to those halcyon days at Old Trafford for the mercurial Portuguese.

It goes without saying that Nani will play a critical role in Orlando’s chances against the Timbers in the final and it might just come down to who turns up the most between himself and Sebastian Blanco.

2. Heath’s Hold Over Orlando Ends But Loons Can Be Proud

Although they initially went into this match-up as favourites, there’s no doubting few predicted Minnesota United to make it this far at MLS is Back. In that respect, and with the wonderful performances they put in against the likes of San Jose and Columbus Crew — two sides far more lauded — along the way, the Loons will leave the bubble with immense pride. 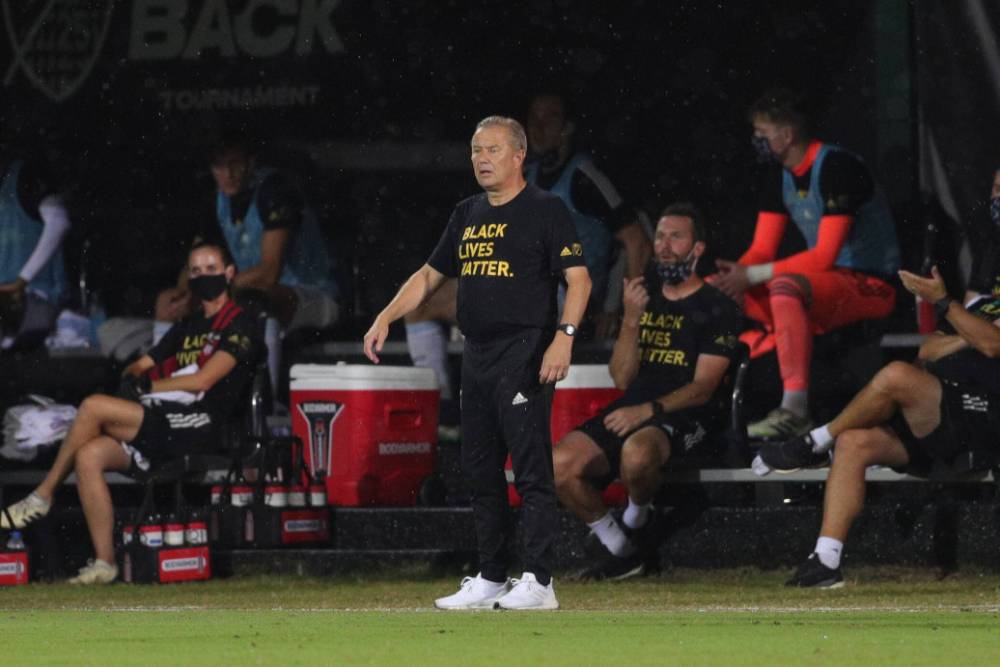 However, it must also be said that Minnesota will also depart the tournament with a ton of regret — the likes of Dotson, Jan Gregus and Ozzy Alonso have been fantastic throughout the knockout rounds but just failed to turn up in the same manner in against Orlando.

And what will probably sting more is the fact that alongside crashing out just before the final, this is the first time Heath has fallen to defeat against his former club — where he lifted a host of USL-level titles — having won two and drawn one of their previous three meetings.

3. Has Pareja Changed The Culture At Orlando?

First of all, it needs saying that an appearance in the MLS is Back tournament final is not the same as qualifying for the playoffs, or even reaching the US Open Cup final. That said, nobody could have expected this from Orlando before a ball was kicked and their run does highlight one thing: Oscar Pareja is turning this club around and dragging them from the canvas.

Last season, the Lions finished 11th in the Eastern Conference and third-bottom in the overall standings, with only Vancouver Whitecaps (8) and FC Cincinnati (6) picking up fewer than their nine victories. Orlando struggled desperately to score goals and were prone to horrific moments of madness in defence, while their midfield lacked control, fluidity and ingenuity.

The appoint of Pareja — replacing James O’Connor — though, filled Orlando supporters with a quiet confidence that their side could finally dream of challenging for a playoff spot, given his previous success in MLS with FC Dallas and 46.94% win-rate across 49 games with Mexican side, Club Tijuana.

Their MLS is Back tournament performance has turned that quiet confidence into loud shouts of triumphant optimism, with fans revelling in reaching a final while their rivals crashed out in the group stages, and on the pitch, it’s easy to see how this has happened.

Sure, Orlando haven’t exactly been spectacular, but Pareja has made this side far tougher to break down, with Jansson and Antonio Carlos striking up a brilliant understanding at centre-back, while full-backs Ruan and Joao Moutinho bomb forward to support the attack safe in the knowledge they have the pace to track back to shut down counter-attacks.

On Thursday, the midfield trio of Mendez, Oriol Rosell and Mauricio Pereyra offered the perfect blend of slick creativity and defensive tenacity to keep the Loons at bay while throughout the tournament, Chris Mueller has shown the rest of the league why those in Florida rate him so highly.

And, of course, it’s all knitted together by the spectacular individual brilliance of Nani who, furthermore, seems to be buying into the project being put together by Pareja — anyone who doubts his commitment to this team need only watch his goal celebrations or how he demands more from his teammates no matter the scoreline to be convinced.

Again, caution should be applied when trying to judge what this means for Orlando throughout the rest of 2020. Yes, they knocked out Supporters’ Shield holders LAFC, but they were without Carlos Vela. And sure, they beat last year’s Eastern Conference champions NYCFC 3-1 in the group stages, but City misfired throughout the tournament and were clearly struggling to shrug off their lockdown rust.

Still, Orlando’s run has shown they can indeed get it done in those big matches no matter how hard their backs are pressed against the wall and it certainly highlights a change in culture being enacted at the club by Pareja.