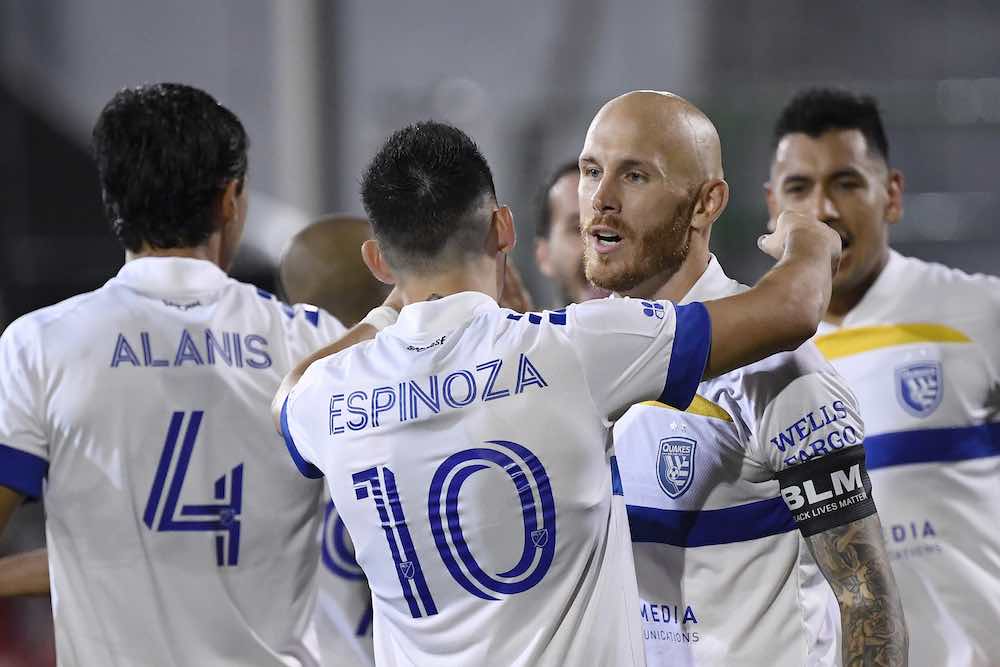 San Jose Earthquakes’ performance at the MLS is Back tournament was almost a microcosm of their 2019 Major League Soccer season. A poor-to-average start; an enthralling, intriguing, and entertaining middle; and a disastrous end.

Disastrous is an exaggeration, especially in the grander scheme of things where we are lucky to have any soccer to watch at all, but the promise and enterprise shown by San Jose at their best makes the collapse in the finale, and the failure to do business at the business end of a competition, all the more disappointing.

It would be easy to attribute the Earthquakes’ rollercoaster-form directly to a playing style that has developed under head coach Matías Almeyda, but that they put themselves in good positions in the first place is down to this style.

2019 was the club’s first season under the Argentine coach, who brought a unique style of play to the league based around high-intensity defending and expansive attacking. 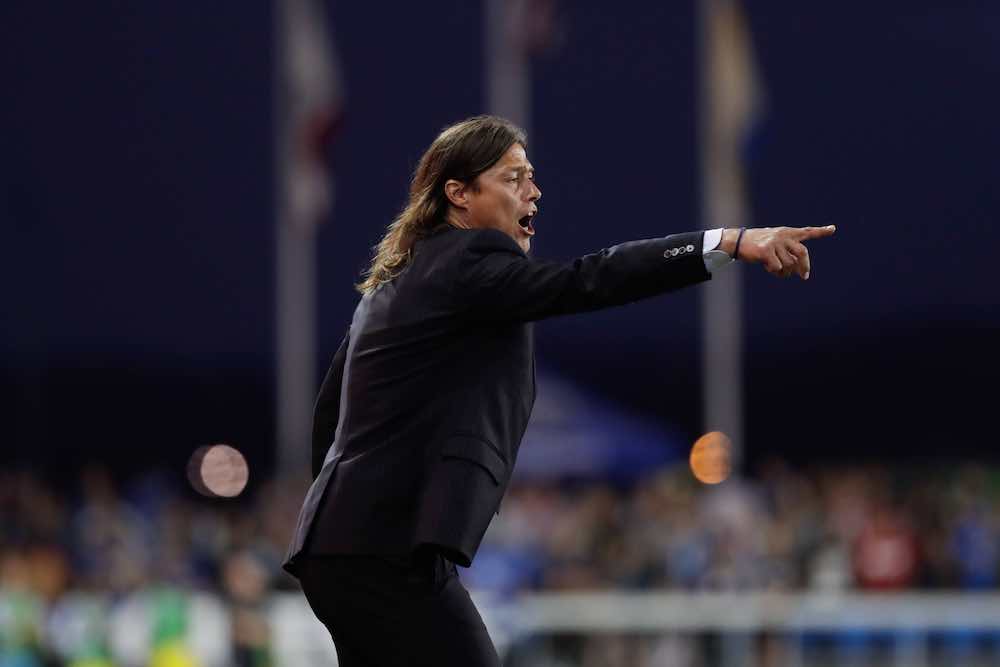 Four defeats to start was definitely not what they ordered; but the team were still getting going, adjusting to the style, getting up to speed, and reaching the levels of fitness required to execute such a plan.

In the middle, a run of 19 games in which they lost only thrice. They were almost in cruise control during some victories and managed to score three or more goals in seven of these games. The Quakes were playing some of the best football in their history and were all set for the playoffs.

Then the decline. The burnout. The running on empty. The failure to reach the playoffs having put themselves in such a good position, and the nine defeats in their last 11 games of 2019.

This was repeated on a smaller scale in Orlando at the MLS is Back tournament this summer. An average opening against Seattle Sounders, a blistering middle during which they scored 11 goals in three games (eleven!), and an extremely disappointing end as they lost 4-1 to Minnesota United in the quarterfinals.

A conclusion that their system is both their strength when they are in full flow, and their weakness at the end of a run of intense soccer, is a simplistic way of looking at it, but that doesn’t mean it isn’t true.

But why not give this style of football a go? 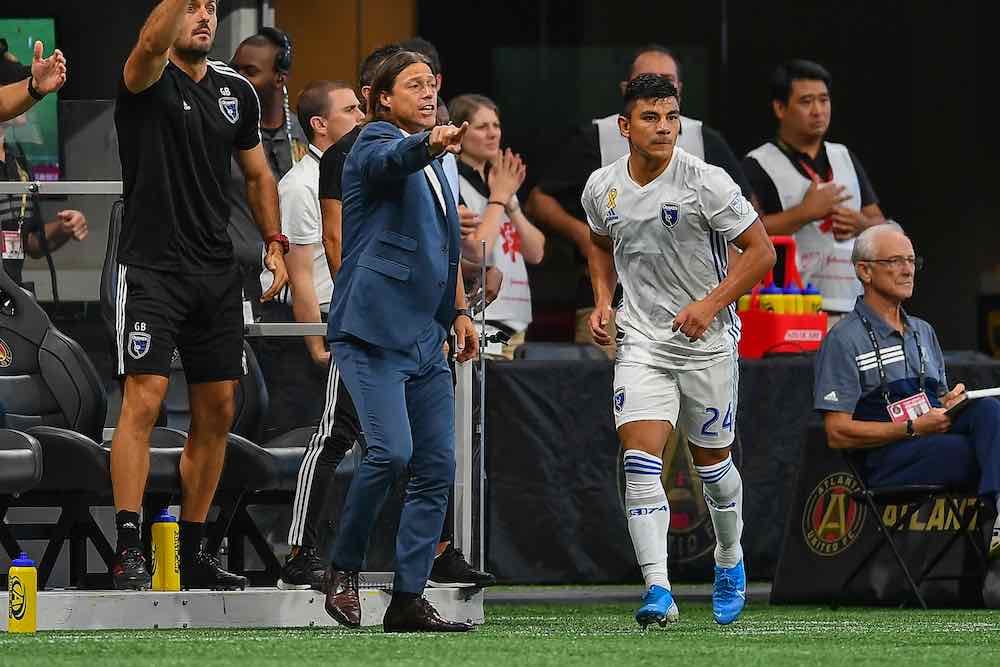 The Earthquakes have only qualified for the playoffs once in the last seven seasons. In 2018, they were the worst team in MLS, picking up just four wins throughout the whole campaign. Given there is no relegation in MLS, mediocrity or worse can become accepted with no repercussions, but Almeyda wouldn’t stand for that.

For all its faults, MLS is a good league in which to experiment with tactics as there is literally nothing to lose, or at least no chance of being relegated. There are enough average and unimaginative teams in the league that if your enterprising, attacking tactics are carried out to a reasonable level, there is a good chance of making the playoffs.

And this is exactly what Almeyda almost did.

Prior to that, there was Houston & The Hiatus, as the original franchise became Houston Dynamo ahead of the 2006 season, before a team with the Earthquakes name resumed play in 2008.

They are also a club who remember their roots, which is a rarity among MLS franchises. These go back to the 1974 Earthquakes of NASL, and that year is still proudly displayed on the club crest to this day, as well as the Twitter hashtag used by their official account.

But what are the modern, Almeyda-inspired, Earthquakes all about, and what exactly is this much-discussed style of play?

It has been generalised as a man-marking system in defence which brings a high risk but also a high reward. If the man-to-man press works and the Quakes win the ball, they are likely to have plenty of one-on-one battles in translation, and if they win one or two of them, all hell can break loose.

“We’ve tried many things, but we were never fixed to a certain way,” Almeyda told the Orlando Sentinel in March. “The way can always be studied from many perspectives, but not always detected.

“You could have generalized last year that San Jose played man-to-man, and I would sit down with that person and say we always had a spare man, so you have to study it and detect where he’s at.”

In Vako Qazaishvili, Cristian Espinoza, and Magnus Eriksson, they have the ideal attacking midfield trio for their style, which at the basic level arranges itself in a 4-2-3-1 formation.

The visualisation below, from Twenty3, shows the average positions of the team from the 2019 MLS season. The full-backs often work in line with the central midfielders across the pitch, and in tandem with the wingers down the flanks. (Nick Lima, the right-footed full-back was used primarily on the left but played some games at right-back, which makes him appear narrower in this graphic than he actually was when operating at left-back.) 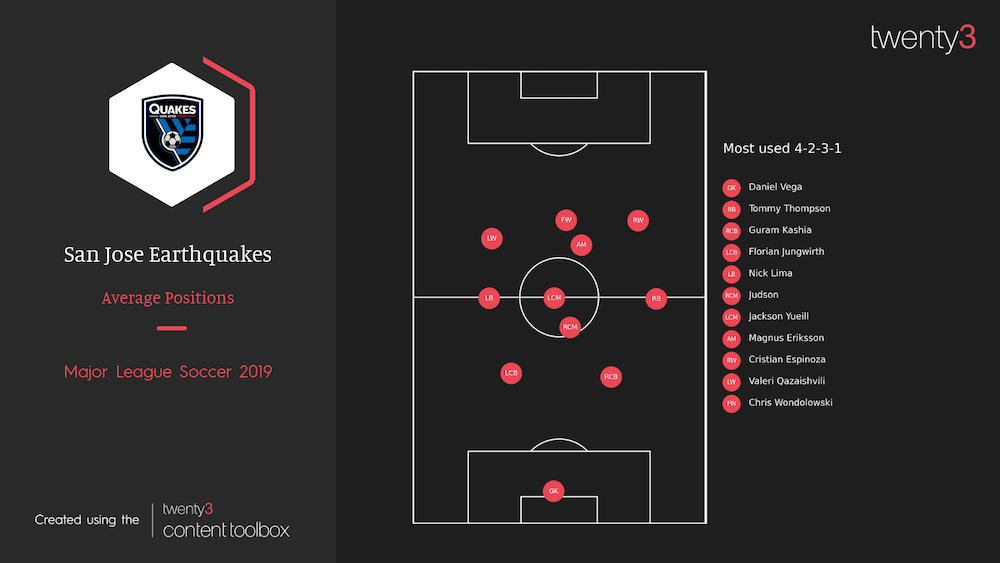 Looking at the data from the 2019 MLS regular season, both wingers, Espinoza and Vako, were in the top six for progressive runs (Wyscout (definition)), with 98 and 87 respectively.

Their directness from wide areas, whether heading for the byline or cutting inside, is something to behold, and is a big part of Almeyda’s system.

Then there’s the creativity to go with it. Espinoza (71) and Eriksson (75) were both in the top 10 for shots assisted during the 2019 season. Portland Timbers were the only other team in MLS with two players in the top 10 for this stat (no prizes for guessing which players).

On top of this, the Quakes were the only team to have two players — Eriksson and Espinoza again — in the top 10 for expected assists during 2019, so the chances they created tended to be good ones. 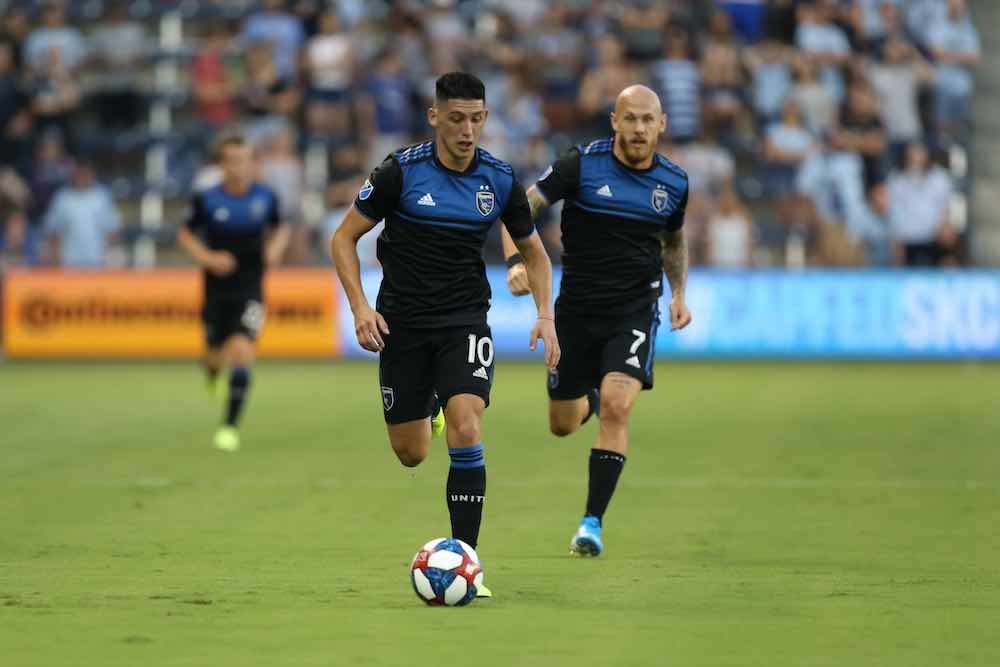 Dropping a little deeper to look at the two within the 4-2-3-1, American midfielder Jackson Yueill was fourth in the league for final third passes completed with 299. The definition of this is: “any pass that originates outside of the final third and the next ball touch occurs within the final third,” which further illustrates the directness of the side from deep.

Alongside Yueill, Brazilian midfielder Judson won’t show up at the top of too many stats charts, apart from maybe fouls committed for which he was fifth in 2019, but his harrying, second-ball-winning, and energetic defending is just as vital to the San Jose style, as the more aesthetically pleasing passing and creativity further forward. While Yueill dispatches the ball, Judson dispatches the opposition.

As a team, the Earthquakes were second in the league in 2019 for total defensive duels won, and third for total attacking duels won. It’s a system built around duels, getting one over on the opponent in all areas of the pitch in order to create the space needed to release those dangerous attackers. This is why it’s often seen as man-marking, but it’s more like man-harrying and a form of pressing.

Looking at the MLS is Back tournament in isolation, this impressive output continued, and if anything, it improved. As the Quakes exited at the quarterfinal stage, Vako and Espinoza were first and second across the entire tournament for progressive runs, and third and fourth for dribbles completed.

The team were first for passes completed, and second for progressive runs and attacking duels won.

In defence, no player attempted more defensive actions than Quakes centre-back Guram Kashia, and in the game against Real Salt Lake, he completed an extraordinary 18 clearances.

San Jose Earthquakes made a total of 29 clearances in their game against Real Salt Lake last night. Georgian defender Guram Kashia made 18 of them 🇬🇪🇺🇸⚽️ (@WhoScored) #Quakes74 #VamosSJ pic.twitter.com/heVxu2nmRy

Their shape was the 4-2-3-1 seen during the previous season, but the centre-backs tended to split wider during the build-up from the back, with Judson, Yueill and goalkeeper Daniel Vega providing the central passing options. Vega’s pass accuracy of 88%, and his position as fourth in the tournament among goalkeepers for passes completed, shows he is very much a keeper who takes part in the build-up play.

The wide centre-backs pushed the fullbacks upfield, which had a knock-on effect on the wingers. Though the basic shape was the same as the previous season, there were subtle changes.

“We practised our tactical movements a lot, and physically we had a top pre-season,” Kashia revealed. “We went through a lot of images and videos where Matías showed us the ways he wanted us to move, especially the spine of the team. You are seeing more movement there, from the defence to offence.

“One of the central defenders decides when we go one-v-one, but we don’t start that way. There’s always a spare player in the defence, and with a lot of communication we end up with one-v-one.

“That is the moment we have to press in the midfield, to jump forward, whether it is me or Oswaldo or Flo, moves up to mark their playmaker, their number 10, and that’s the movement we practice.”

All of this shows San Jose continue to live on the edge under Almeyda, and though it’s an exhilarating ride for much of the way, they have once again fallen off that edge at the business end of the competition.

Those one-on-one battles can work against them, as shown below when the otherwise dominant Kashia lost track of his man and was left behind for one of the goals conceded in the game against RSL. 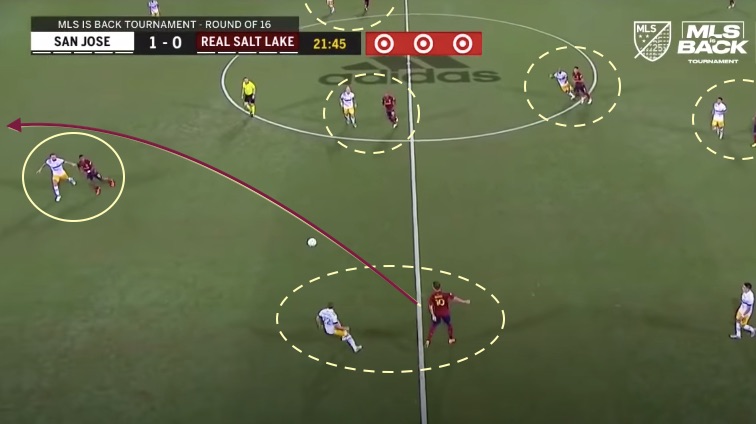 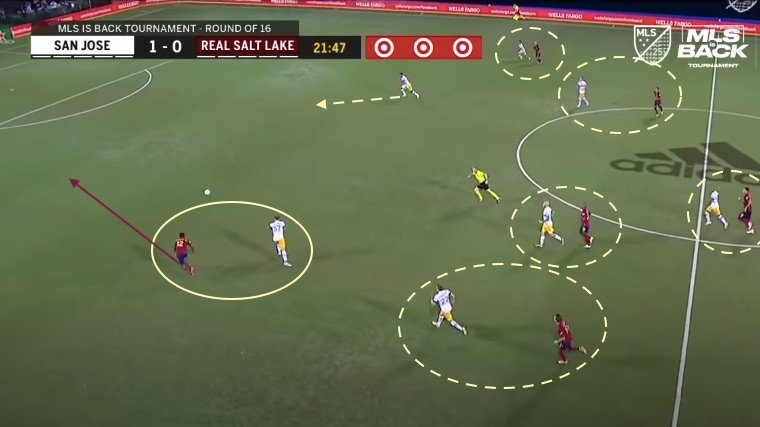 RSL striker Douglas Martínez creates space between himself and Kashia after the Georgian misses his interception while the free man, Oswaldo Alanis, is unable to get across.

The dotted circles show the man-marking across the rest of the pitch that creates this type of situation. This isn’t to single out Keshia for criticism, but to highlight the risks when using this type of high-line, man-on-man press.

The obvious reason for San Jose’s late-tournament slumps might be the fatigue from playing such a style. The fact that there is little rotation in this exhausting system, and the same lineup played four of the five matches at the MLS is Back tournament, suggests they might need more like-for-like squad depth, or at least to use what depth they have more liberally.

If they can harness the craziness and the apparent chaos into something more structured, there is no doubt they will secure a playoff spot this time around, but the question is do they and those who enjoy watching this team want them to tone things down? Probably not. Especially when there is nothing to lose.

Loading...
Newer Post
Ari Skúlason On Representing Iceland And His Country’s Football Development
Older Post
Could Ryan Fraser Be One Of This Summer’s Biggest Transfer Bargains?