What Next For Inter Miami After Disappointing Start To MLS Life?

When David Beckham and Jorge Mas first announced their plans to bring an expansion team to Miami, they made a promise that the club would play free-flowing, attacking football. With the hiring of Diego Alonso, it saw Miami shift their intentions to become a bit more defensive and pragmatic.

Being a ‘defend and counter’ team isn’t necessarily a bad thing, but as a team with expectations as high as Inter Miami, sputtering out of the gate in their inaugural season was perhaps the last thing they had in mind.

At the MLS is Back tournament, Alonso’s men were disappointing to say the least. Their largely uneventful outing in Orlando saw the team go 0-3 in the group stage, conceding five goals and only managing to score twice.

With all the talk of potentially bringing in two more players, including a big-money Designated Player signing, it’s up to the Inter Miami sporting director Paul McDonough to fill in the gaps that could help La Rosa Negra take themselves to the next level.

For now, what are the problem areas on the pitch for Inter Miami? What has the team been lacking so far in their opening five games? How can they improve?

Inter Miami came into the league looking to make a splash.

Many people believed the pairing would make an impact almost immediately, however, both Pellegrini and Carranza’s performances during the MLS is Back tournament suggests that the need for offensive reinforcements is more important than ever.

In urgent need of an experienced attacking player

Although the club managed to snag the services of Mexican international Rodolfo Pizarro, the 26-year-old cannot do it alone.

During the tournament, Miami failed to capitalize on a myriad of chances they created. Take the game against the Philadelphia Union for example.

That night, Miami outshot the Union ten to eight with four of those attempts being on goal. The score could have easily been tipped in their favour, but due to lack of conviction up top (and admittedly poor defending), the players were left wondering how they did not get three points.

Struggling to create and finish chances

Inter Miami shot map and difficult at the MLS is Back tournament. Graphic: Twenty3. Data: Wyscout.

They do not have a striker that can help create chances comfortably or score on demand should the team need a goal. Both Julian Carranza and first-round draft pick Robbie Robinson are still young and adjusting to the league’s physicality, Juan Agudelo isn’t the typical number nine that Alonso would use in his system, and Jerome Kiesewetter doesn’t appear to be the team’s short term option.

The club has also been linked to the likes of Edinson Cavani, Radamel Falcao, and Luis Suarez, but none of these rumours seem viable.

With all that said, it is not like there have not been positives to take away from Miami’s swift tournament exit.
Julian Carranza has shown glimpses of what he can do given the time and space to pick his spot and Scottish international Lewis Morgan continues to prove his worth, quietly becoming one of Miami’s most important players.

Not only does he give the team the extra boost of speed on the wings, but his technical ability and positional awareness (as seen on Miami’s wonderfully constructed goal against Philadelphia) gives the team a different attacking outlet other than overly relying on Pizarro.

Whatever happens, when the MLS transfer window opens on August 12th, Miami’s priority is acquiring an experienced number nine. That could very well be the key to the team making the jump forward.

Central Midfield is an Issue 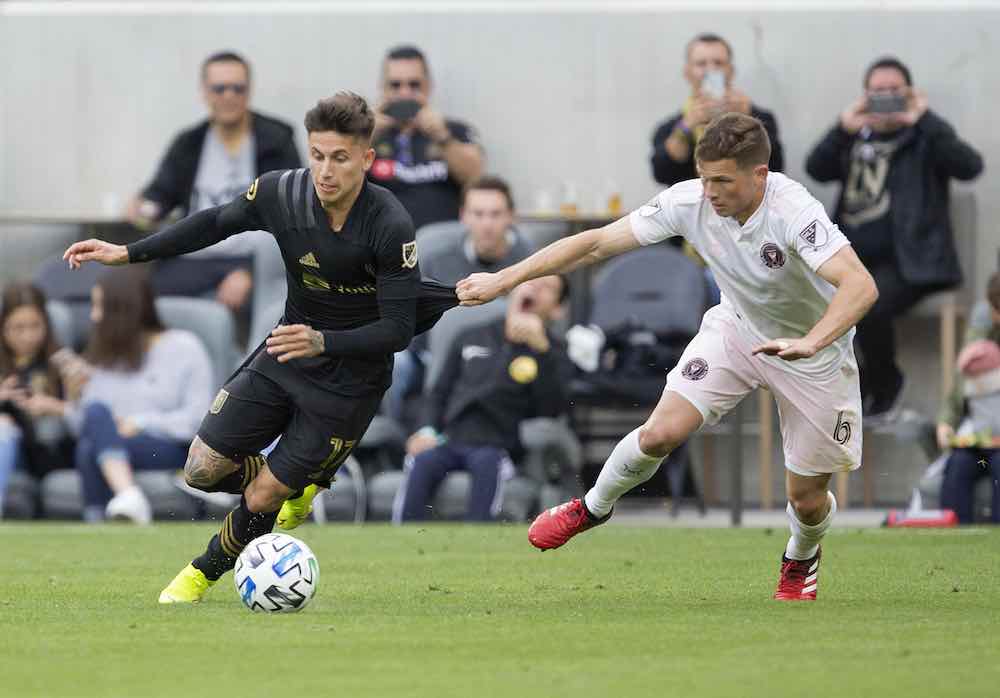 Brian Rodriguez of LAFC (L) takes the ball past Inter Miami’s Will Trapp.

One of the more glaring problems that Inter Miami has had is in central midfield. The double-pivot pairing of Victor Ulloa and Wil Trapp is devoid of creativity and lacks the defensive work rate to make up for their mistakes.  In most matches, both Ulloa and Trapp have either been defensively exposed or do not position themselves properly to help Miami’s attacking trident.

Against NYCFC, Ulloa and Trapp’s impact was minimal. According to WhoScored, the duo had a combined total of 51 touches compared to James Sands’ and Alexander Ring’s 135 who proved to be far more effective for their side.

For a team that’s heavily reliant on moving progressing the ball quickly through midfield to find the open man or switch the point of attack, the lack of a true ball carrier in the middle of the park hurts the team greatly.

There have been rumours of McDonough possibly bringing in a number eight instead of two more attack-minded players. If this does come to fruition, it would be a wise decision that could prove even more important than bringing in an extra winger.

Even though the need for a number nine is a pressing issue, perhaps it would be in Miami’s greater interest to bring in a true number eight that can both defensively screen a backline and also break the opposition offensive lines with his passing and technical ability.

Defence Can be Better

Inter Miami’s defensive line is probably the strongest point on this roster. The future centre-back pairing of Leandro Gonzalez Pirez and Nico Figal will see Miami, potentially, have one of the best defensive duos in the league. Couple that with the incredible young talent that is Colombian international U- 23 Andres Reyes and the veteran savvy of Roman Torres, Miami’s losses do not tell the entire defensive story.

According to WhoScored, in the Group A opener against Orlando City, Miami’s backline had a total of nine clearances and 10 interceptions. While they lost the game, before Andres Reyes suffered a horror injury due to Dom Dwyer’s flying elbow Miami’s backline was organized, alert, and managed Orlando’s attacks well.

In the future, Miami will need to clean up silly mistakes if they want to finally keep a clean sheet.

The other problem that is hurting the team is the carousel of fullbacks Alonso continually rotates. Going back to March, Alonso has started a total of five different players at the fullback positions. Ben Sweat and rookie Dylan Nealis were presumed to be the undisputed starters until both had poor outings against Orlando City. The subsequent games against the Union and NYCFC saw Figal move out to right-back and Mikey Ambrose come in for Sweat.

If Miami want defensive consistency and an end to their defensive woes, Alonso must find a fullback pairing that can not only be comfortable going forward but also has the defensive awareness to get back if needed.

For all the hype that surrounds this club, the truth is the team is far from being complete. There are two more signings potentially coming in and they should help Alonso play the style of football he intends to.

It’s easy to get caught up in the doom and gloom, but as long as McDonough brings in a reliable number nine and truly dominated central midfielder, they should start to live up to the heavy expectations that were set upon them.

Alex is a soccer enthusiast with an unhealthy obsession with tattoos. Born and raised in Miami, she spends her time waxing poetic over Jordan Rakei, finding different tea combinations and planning her next road trip