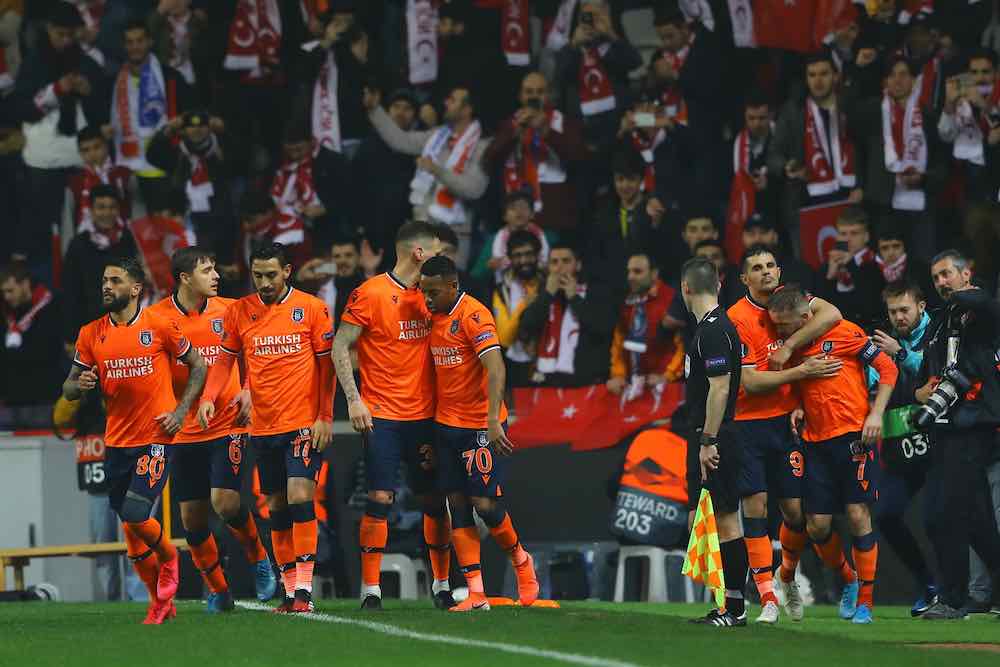 19th of July 2020, marked a historic date for Istanbul Basaksehir as they were crowned champions of the Turkish Süper Lig for the first time in their history. They are only the sixth side in history to win the Turkish title.

On top of this, they are currently in the round of 16 of the Europa League, looking to progress in their second leg away to Copenhagen after winning 1-0 in Istanbul.

This new-found pedigree, which seems to have come very quickly to the club and their fans, has sparked curiosity from football fans worldwide, and Basaksehir will now be competing in the Champions League next season. 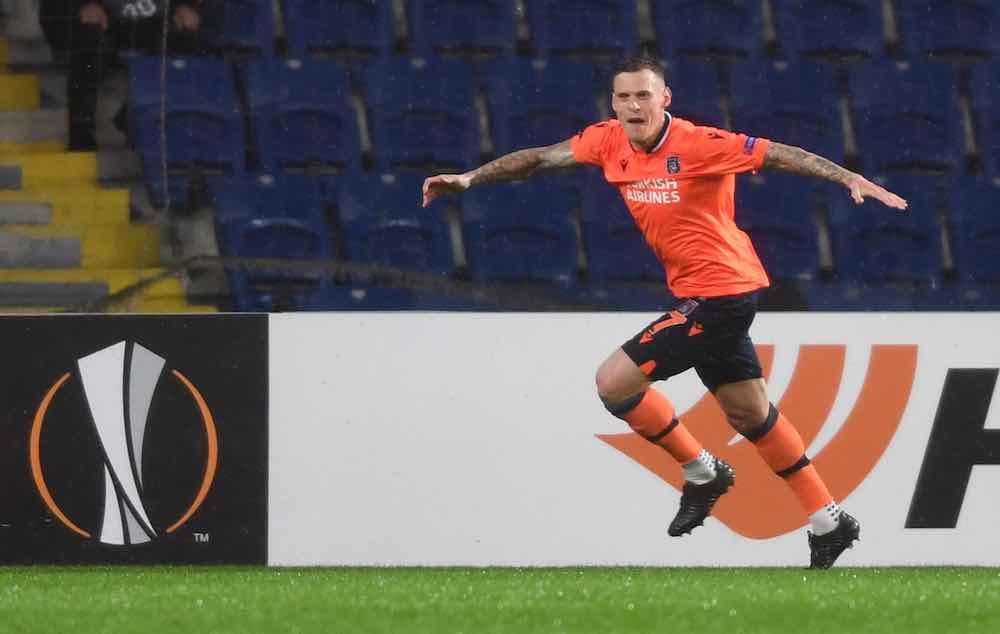 Basaksehir’s Slovakian defender Martin Skrtel celebrates after scoring a goal during the UEFA Europa League round of 32 second-leg football match between Istanbul Basaksehir and Sporting Lisbon on February 27, 2020, at the Basaksehir Fatih Terim Stadium in Istanbul. (Photo by OZAN KOSE/AFP via Getty Images)

Who Are Istanbul Basaksehir?

A story very prevalent in the football media recently has been the 30 years Liverpool and their fans had to wait for their title win. For perspective, when Liverpool won their last title on April 30th 1990, Istanbul Basaksehir was not even a registered club.

The club achieved their first promotion to the Süper Lig in 2007 after playing nine seasons in the second tier. They steadily progressed in the Süper Lig, finishing 12th in their first season but achieving a zenith of 6th in 2010. However, they suffered a difficult season which saw them relegated back down to the second tier in 2013, and manager Bülent Korkmaz was sacked at the end of the season.

Basaksehir bounced straight back up, finishing as champions of the second division the next season under manager Cihat Arslan, who had previously played for the club.

They then appointed Abdullah Avci for a second spell, after he had previously led them to a Turkish Cup final in 2011 where they were narrowly beaten on penalties by fellow Istanbul club, Besiktas. Avci had managed the club between 2006 and 2011, and then after rejoining in 2014, served another five years. This time bringing even more joy to supporters.

Importantly, Avci seen his side go from strength to strength in this second spell, and this was clear to any fan of not just Basaksehir but anyone who follows the Turkish Süper Lig.

The side finished fourth in 2015 and 2016, and came agonizingly close in 2017 as they finished second in the league, just four points behind Besiktas.

In addition to the history and progression of Basaksehir, the way that they operate as club is definitely worth noting.

Avci explained the operational side of the club in an interview with Turkish broadcaster TRT: “We have continuity throughout the club and we have a player profile that constantly tries to develop their game and their playing style.”

This is a clear goal of Basaksehir as they look to establish a more prominent brand and style in Europe. They want to be seen as a better alternative to the big three in Turkey: Galatasaray, Fenerbache, and Besiktas; whose fans represent 80% of all Turkish football fans.

Crucially, when talking about the big three in Turkey and how Basaksehir’s identity is forming, all three of the big three have fallen victim of financial fair play’s regulations. The three have a combined debt of $1.8 billion to various banks. Basaksehir, however, feels like a club that are going in a different direction.

Its Basaksehir’s 1st league title & just the 2nd won by a team other than Fenerbache, Galatasary or Besiktas since 1984 (other was Bursaspor in 2010)

A lot of supporters of the club are fans from other clubs that have seen what Basaksehir have been doing and started following them. However, the fact that last season Basaksehir, despite winning the title, had the second-lowest average attendance in the league would suggest that they are still in the process of forging a bigger fan base and establishing a bigger presence.

Avci once said: “our team is not really affected by squad politics like the big teams, we are able to establish supremacy over our rivals tactically and with the power of our gameplay because we are a very balanced team.”

This is a very important point. We all know that politics play a crucial part in the running of the big three. Basaksehir are aware of this, but don’t want this to affect the squad and focus on balance on the pitch as well as bringing in high-quality players.

Avci departed the club at the end of the 2018/19 season to join Besiktas. Under Avci, Basaksehir didn’t play blistering, swashbuckling football, but part of the reason for their consistent top-four finishes was their solidity and compact 4-3-3/4-5-1 shape.

Avci made way for manager Okan Buruk who has guided Basaksehir to their first title win, and then to the Europa League Round of 16, playing a more attacking style. The style of Basaksehir is the modern way of playing out from the back. 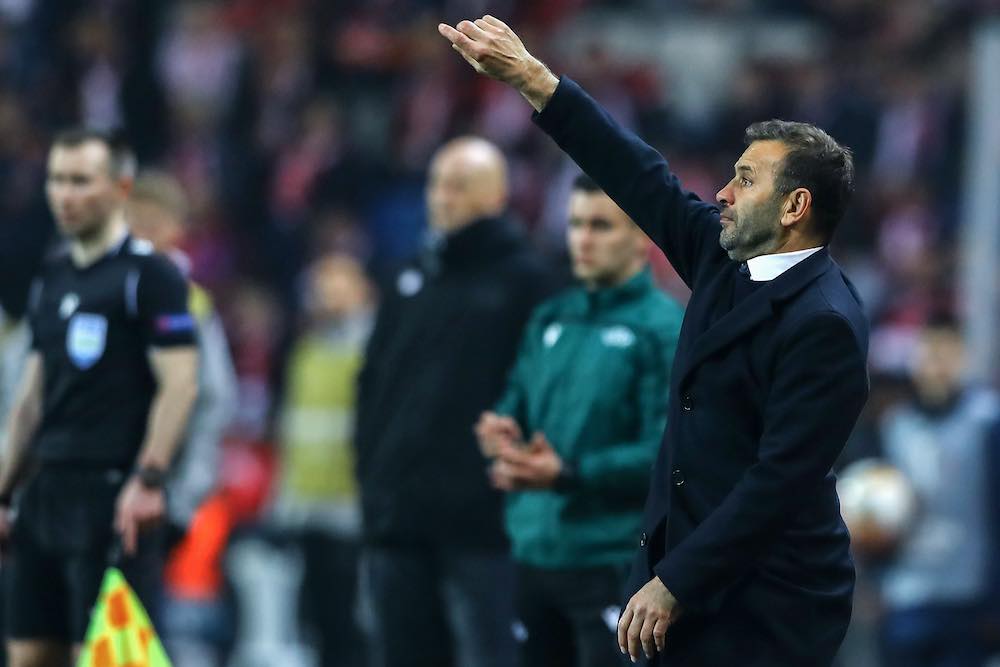 That said, they don’t average a lot of possession, just over 50% this season. They play out slowly from the back but are lethal on the counter-attacks and from crosses. A player that has been crucial to this is Edin Visca, the Bosnian winger has 12 assists, the most in the Süper Lig.

This season Basaksehir have overcome a massive hurdle. They are only the third side outside the big three to win the title. They have attracted more attention outside Turkey thanks to their Europa League run, and getting to the quarter-finals would certainly attract more, if they can get past Copenhagen.

They defeated Wolfsburg and Borussia Monchengladbach in the group stage, only losing to Roma, and defeated Sporting CP over two legs in the first knockout round.

Given the progress the club is making, it wouldn’t be a shock to see them on this stage and securing these types of results much more frequently in the coming years.