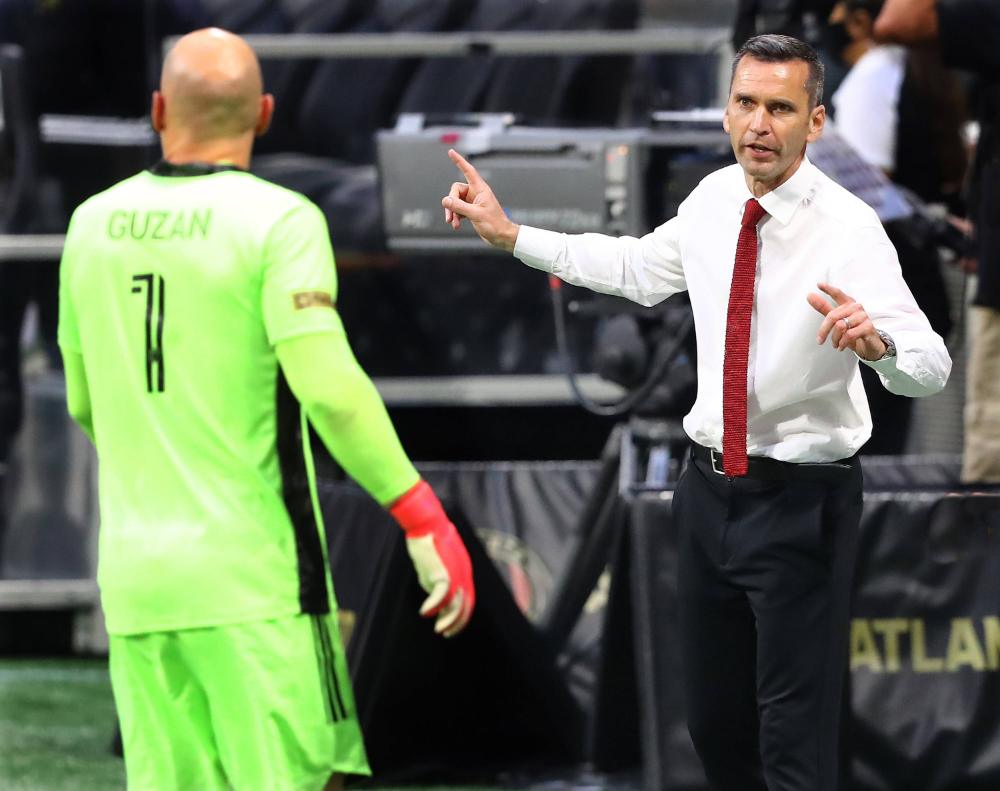 For the first time since August 23rd, Atlanta United were on the winning side as they ran out 1-0 victors against FC Dallas on Wednesday night.

The Five Stripes have suffered a wretched 2020 season so far, with Josef Martinez out long-term with a torn ACL, a disastrous MLS is Back campaign and the departures of Pity Martinez (Al-Nassr) and Frank de Boer (sacked and now managing the Netherlands), while a number of off-season arrivals have struggled to make an impression.

And so, with confidence at an all-time low, the 2018 MLS Cup champions hosted an FC Dallas side on a run of three consecutive victories, with the likes of Michael Barrios, Tanner Tessmann and Franco Jara on fire in recent weeks. Things looked all set for another walkover in Georgia.

However, the Five Stripes shocked many — not least their own supporters — with what was arguably their best performance of the season so far, picking up three vital points in the process thanks to a 55th-minute Jeff Larentowicz penalty.

This wasn’t a positive performance in the sense that we saw free-flowing, attacking football from Atlanta. Nor was it defensively perfect — Dallas certainly had their moments. What impressed the most was the sheer amount of effort put in by Glass’ side when it would have been so much easier to roll over and accept their fate.

This first half has screamed of a side shockingly low on confidence but working incredibly hard to put things right.

Atlanta pressed, worked and harassed Luchi Gonzalez’s side right from the first whistle, ensuring Dallas couldn’t play out from the back and, when they tried, a mistake never looked far away.

Across the course of the match, Atlanta made eight tackles, one interception and six blocks in the opposition half, while they also committed 10 fouls beyond the halfway line — some in an attempt to force a quick turnover, others to thwart Dallas counter-attacks.

To pick out one singular performance would be to negate just how much each player in black and red offered to this match. Jon Gallagher impressed once again after a positive performance against Inter Miami — the Irishman managed two shots, one dribble and one key pass during his 72 minutes on the pitch and always looked to pick up the ball in dangerous pockets of space.

Jake Mulraney was a constant pest when Dallas had possession, pressing the Texan side with three tackles and one interception, while he was equally exciting once the ball was turned over, driving inside to commit opposition centre-backs and firing some venomous shots toward Jimmy Maurer’s goal.

As mentioned, Larentowicz dispatched the winning penalty — awarded for handball mere moments after he tried a remarkable overhead kick — and lead by example in the middle of midfield, keeping things simple when Atlanta needed pause and driving the ball forward when they needed to catch Dallas on the backfoot.

Can’t shake our Captain from the spot 💥 pic.twitter.com/KgQlBQpIo7

In a week where he had stirred up the Atlanta fanbase with a call for support, Franco Escobar put in one of his best defensive performances of the season while maintaining all of the buccaneering, no-compromise approach which makes him so iconic at the Mercedes-Benz Stadium. And to leave out George Bello, who tore up and down the left flank like a man hellbent on singlehandedly turning this struggle of a season around, would be incredibly cruel.

Glass summarised it well after the match: “The resilience of the group was there for all to see.”

Of course, some context is required when analysing this performance and result. The three points gained against Dallas lifts the Five Stripes to the lofty heights of ninth in the Eastern Conference and although that is still somehow above the playoff line, it is a long way from what this club expects from itself.

What’s more, with the 2-0 win over Nashville in August, we’ve seen this sort of reaction before from Atlanta, this sort of result, along with all the desire and effort which came with it, needs to become a consistent feature if fans are to engage with this team again.

However, for the first time in quite a while, Atlanta United offered their supporters a performance to be proud of. There was blood, guts and thunder, relentless running and an endless work ethic. When confidence is as low as it has been for this side throughout the course of 2020, you cannot ask for more than that.

A victory for the ATL 😤 pic.twitter.com/P9hZVLkkfz

Boosted by the arrival of Marcelino Moreno from Lanus on a Designated Player contract and with Ezequiel Barco nearing a return to action, the Five Stripes might just have a little more fight left in them this season than they were given credit for. If you needed any further proof of what this meant to the players, just take a look at Brad Guzan going to each and every one of his teammates to enthusiastically congratulate them.