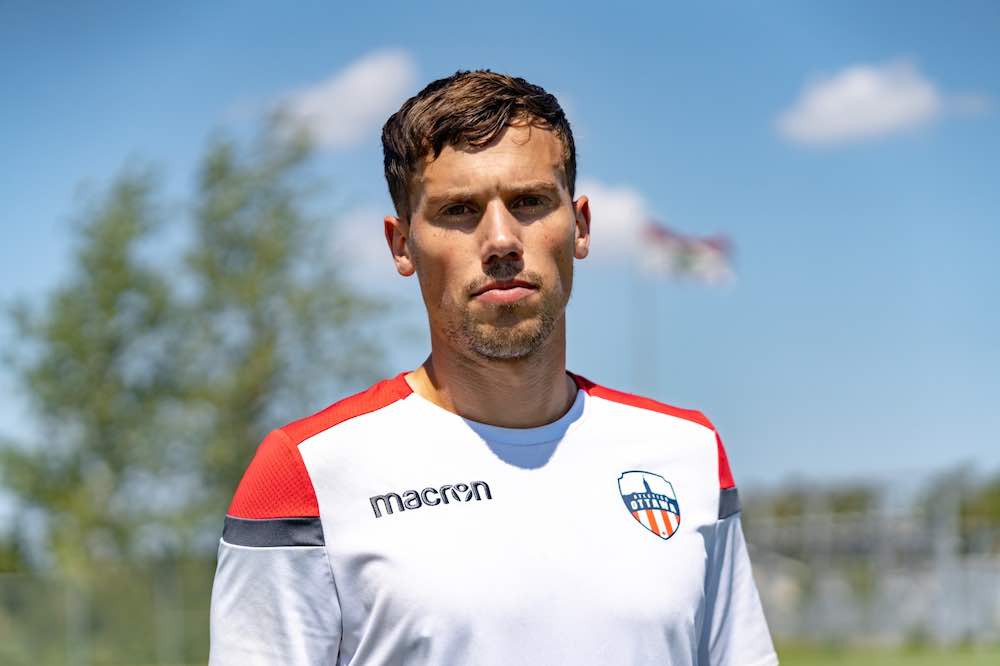 Despite finishing second-bottom in 2020, Atlético Ottawa turned a number of heads with some positive results and eye-catching performances during their debut season in the Canadian Premier League.

Being affiliated with Spanish giants Atlético Madrid, Ottawa were always going to come under a certain level of scrutiny but with victories over Cavalry FC and Pacific FC, “Ottleti” gave more than a good account of themselves.

Building a club from scratch is something that is perhaps more familiar to fans of football in North America, with Major League Soccer constantly expanding — this year alone, Inter Miami CF and Nashville SC entered the league with the likes of Austin FC, Charlotte FC and more still to come.

At the forefront of the project up in Canada is 27-year-old midfielder, Ben Fisk, signed as Atlético Ottawa’s first-ever player and team captain.

Speaking exclusively to WFi, Fisk gives a unique perspective on the early relationship between the Ottawa and Madrid-based clubs.

“There has been a lot of connection. From day one, they’ve really tried to make us feel like a part of the Atlético family,” he said.

“In pre-season, before Covid hit, we were set to spend six weeks in Madrid training at their facilities, feeling like a part of their club, using the same training pitches that their players do, being intermingled with them. That obviously had to be cut short due to Covid but that was the beginning of the connection.

“I played a FIFA tournament online for the Atlético Universe where it was myself, Koke, a player from Atlético San Luis in Mexico, a player from their female team. They’ve just done everything they can to make us feel like a part of the family and make us feel their support.” 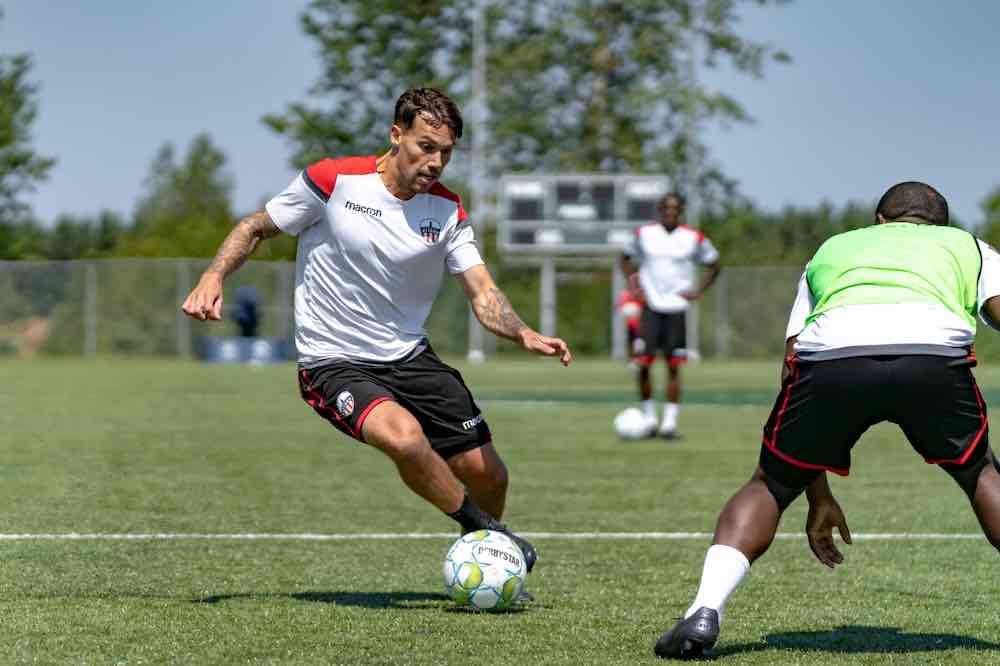 While nobody is expecting a player to switch Ottawa for Madrid and La Liga in the immediate future, Fisk does believe that having the weight of the Atlético name is valuable for those looking to make big steps in their career.

He added: “You’re under the umbrella of, in my opinion, a top-10 club in the world. If you’ve got that ownership backing you, not that I’m saying I’ll go and play for Atlético Madrid, but if you’ve got that company behind you, it can do wonders moving to another club with that sort of recommendation and support.”

One of the most obvious early advantages of being affiliated with Los Colchoneros was the installation of Mista and general manager and head coach.

A striker during his playing days, Mista enjoyed an illustrious playing career as part of Rafael Benitez’s title-winning Valencia team in 2001/02 and 2003/04, while he also spent two years with Atlético Madrid between 2006 and 2008 and picked up two senior caps with the Spanish national team.

Fisk says working under the 41-year-old has been an “incredible” experience so far, revealing that Mista is a man of few words who unloads his vast wealth of experience in a way which commands attention.

“It’s been incredible,” he said. “For the short time that I’ve had him, he’s definitely one of the most inspiring coaches I’ve had. He’s very quiet, a man of few words but when he speaks, you really listen.

“As an attacking player, he’s given me a lot of little nuggets of information, little bits and pieces to add to my game where he thinks: ‘you do really well in these situations but you’re not making the runs to get yourself there more often’.

“Little bits like that, where he sees everything from such an experienced point of view. He’s played at the highest level so he really brings a quiet confidence to everything he says and as a player, I’ve just been trying to soak that all in and take as much as I can from him.” 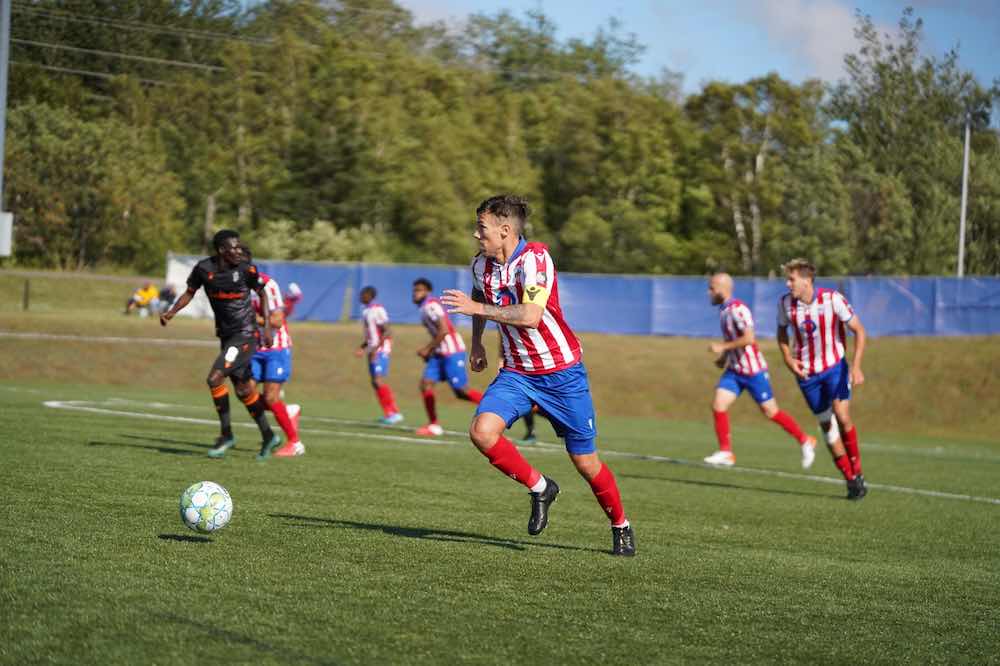 “The highest of highs and the lowest of lows”

Fisk himself spent two years playing in Spain between 2014 and 2016, first turning out for Segunda Division B side Coruxo, who signed him from Vancouver Whitecaps. Four goals in 24 appearances for the Vigo-based side was enough to attract the attention of 1999/00 La Liga champions Deportivo La Coruna, who snapped him up and put him into their reserve side, Deportivo Fabril, in the fourth tier.

This is as close as Fisk — who has also spent time in Northern Ireland with Derry City — has come to reaching the very pinnacle of the game so far, making 24 appearances without scoring before being released after just one year and returning to Canada with FC Edmonton. He says that although he experienced the “highest of highs and lowest of lows” you can expect as a professional footballer in Spain, that period helped define the player and person he has become today.

“My time in Spain was very pivotal for my career thus far. Both some of the best times and some of the worst times,” Fisk recalled. “The worst times just in a sense that it was the closest I’ve ever come to realising my dreams of playing at the highest level.

“When I was at Deportivo it was the high of signing for such a historic club like that, training with the first team, getting close to breaking in. And then ultimately falling short, it was the highest of highs then the lowest of lows when I left and that’s ultimately what lead me to come back to Canada.

“I felt a little bit deflated from falling short of what I felt was possible but on the footballing side of things, I feel that’s also the time that I grew the most as a player. I really fell into my own personality and who I’ve ended up becoming as a player. As I’ve matured, it’s all credit to my couple of years there learning from those clubs, the coaches and the players around me.”

Shortly after returning from Spain, Fisk was given his first two and, to date, only caps for the senior Canadian national team in 2017, starting against Bermuda and coming off the bench against Scotland.

Fisk — also capped 14 times for Canada at youth level — says that he’ll always dream of returning to the Canucks fold, saying those two caps represent some of the proudest moments of his career and life so far. 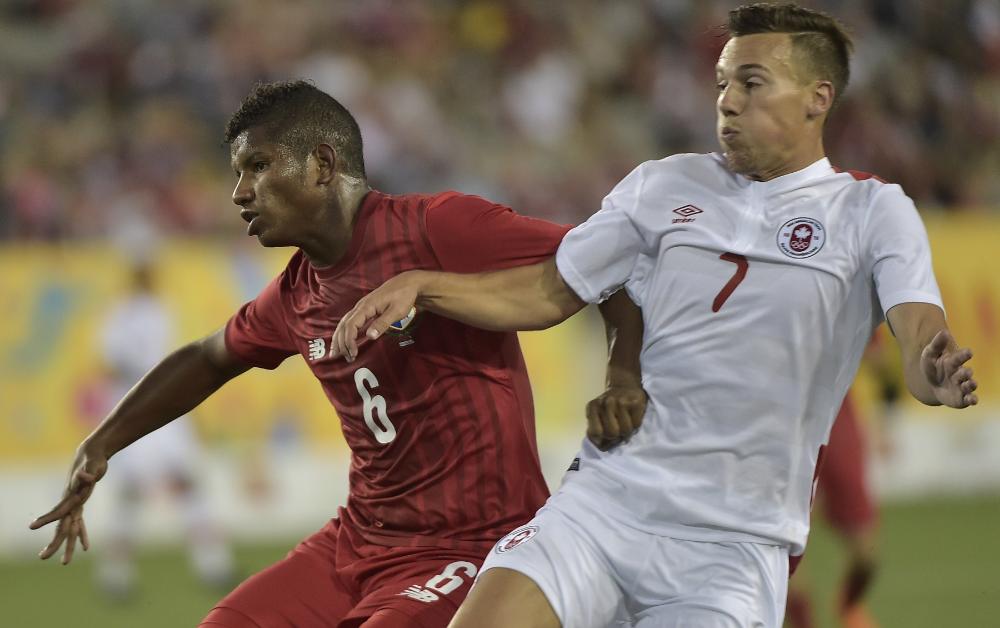 “Definitely. Until I hang up my boots, that’ll always be a dream of mine, to be in that set-up,” he said.

“Right now, I’m definitely on the outside looking in for any number of reasons but representing my country has been one of the proudest moments of my entire career and my entire life. Like I said, that’ll always be a dream, to be back involved with that group.”

However, with the emergence of Alphonso Davies at Bayern Munich and Jonathan David — first with Gent and now Lille — along with the likes of Jonathan Osorio and Liam Fraser at Toronto FC, the CanMNT is stronger than it has ever been before.

Fisk accepts that he has a huge challenge on his hands if he is to pick up more caps but, on the whole, is just happy to see his country finally emerging from the shadows on the international stage.

“They’re very good and building on what I said before, there’s a very good reason why I’m on the outside looking in for the national team right now,” he admitted. “If that’s the case and I never get to play for Canada again, but it’s because of the quality that’s coming through in that group, I’ll still be a pretty happy guy.

“For anyone that’s grown up as a Canadian player, following Canadian football, supporting it in any way, shape or form, I think seeing the national team build a group with such potential, and seeing players like Alphonso, Jonathan, and Lucas Cavallini playing at the highest level or coming back to Canada on a DP [Designated Player] contract, that’s something that is relatively rare for Canadian players, or at least has been throughout my lifetime.

“To see those guys breaking down barriers and really making a name for Canadian football, it’s been amazing to watch.”

“My goals are the same every year: to win whatever competition I’m a part of”

Atlético Ottawa finished seventh out of eight teams during their maiden Canadian Premier League season and, indeed, only the division’s second year of existence.

However, although they didn’t make it beyond the first stage of the revamped tournament — named the Island Games — they showed more than enough to suggest they will come back stronger in 2021.

Fisk is determined to lead “Ottleti” to glory in CanPL’s third season, and he will try his level best to deliver on the pitch, offering leadership as well as the goals and assists that are a prerequisite for attacking players.

He stated: “My goals are the same every year and that’s to win whatever competition I’m a part of, that’s first and foremost. I think we showed this year that we’re creating a team that’s more than capable of competing.

“Hats of to Forge for winning, hats of to Halifax for making the final, the other teams that made the playoffs. No disrespect to them at all but I really do believe that we can compete with all those guys and showing what we did on very little preparation, I think it speaks a lot about what we’re capable of in Ottawa. I’m very excited to see the team we put together for 2021 and to see how we fare in the league.

“Personally, I just try and put my best foot forward every single day, to do what the team needs. Obviously, as an attacking player, I need to be chipping in with goals and assists but I think I’m also a guy who brings a lot more to the squad on a leadership level, trying to set an example day in, day out. I keep those high standards for myself, and hopefully, the team will come together as well and win the championship.”