The Island Games have reached the group stage as the first phase of play came to an end on Sunday.

York9 contrived to miss out on qualification after starting the weekend in a position of strength. The next stage begins on Wednesday with the top four from the standings back in action.

Here’s how the latest action played out…

All matches played behind closed doors at UPEI, Charlottetown, PEI

Forge knew coming into the match a draw would seal their place in the group stage, while Valour needed a win to stand any chance of qualifying. Things started well for Bobby Smyrniotis’ side when captain Kyle Bekker’s volley into the floor looped over the defenders and the stranded goalkeeper and into the net to make it 1-0 inside 10 minutes.

The Winnipeg side were back on level terms just five minutes later, though, when Yohan Le Bouris met Brett Levis’ corner at the back post to head home. Then, shortly before the half-hour mark, the dream was well and truly alive when Moses Dyer got in front of the defenders to put Rob Gale’s side in the lead.

With a 2-1 half-time lead, Gale would have hoped to hang on, however, Swedish defender Alexander Achinioti-Jönsson perfectly glanced on a header from a Maxim Tissot free-kick which evaded everyone and found its way into the Valour goal. The Valour efforts were thwarted from here on out and 2-2 was the final score, Forge through and Valour heading back to Manitoba.

This was a winner takes all affair with both sides knowing a victory would secure their place in Wednesday’s next phase, with the losers forced to wait for other results. Cavalry lost their attacking midfielder Oliver Minatel when he chased down a loose pass before a strong but fair challenge from Nine Stripes defender Roger Thompson left the Brazilian in a heap. The 28-year-old was stretchered off and in the aftermath, it was confirmed Minatel had undergone surgery to repair a broken leg.

When the action resumed, it was Thommy Wheeldon Jr’s side who had the best of the chances, York9 just hanging on until half-time with the scores level. It was on 68 minutes when Nathan Mavila’s shot was palmed into the path of Marcus Haber, who was left with the goal at his mercy and gratefully took his chance. A disappointing attempted save from Nathan Ingham, who perhaps should have held the original effort. 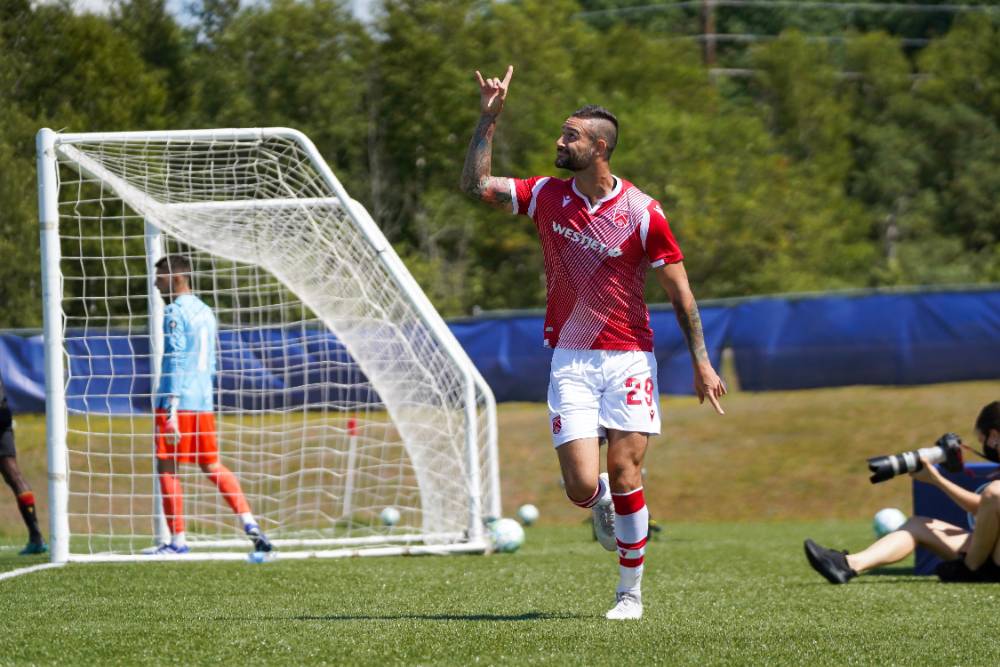 With York9 pushing for the equaliser as stoppage time ran out, Jordan Brown almost scored an audacious lob as Ingham backpedalled to concede the corner, but that was that. Cavalry through as league leaders as York9 waited on Sunday’s matches.

Perhaps the surprise package of 2020, the Wanderers have been outstanding so far in the Island Games and they qualified for the group stage by making light work of Atletico Ottawa, who bow out in their inaugural season with plenty of positives and lots of lessons to be learned.

Stephen Hart’s men took the lead on 15 minutes when Akeem Garcia got his fourth goal of the season, getting in behind the defence to poke home Alex Marshall’s cross.

Ottawa had their moments, as they have throughout the season, but it was ultimately in vain as Christian Oxner was unbeatable in the Wanderers net. Bang on the hour-mark, Allessandro Riggi latched onto a misplaced pass from Ben McKendry before chipping the goalkeeper to make it 2-0 and secure the points for his side.

After back-to-back wins last week, Pacific would have been confident of their chances against the bottom of the table Edmonton side. Needing a win to qualify in the final match of the league stage, Pacific delivered, although it wasn’t always as easy as many might’ve predicted.

After a cagey opening hour, it was the Eddies who took the lead, Easton Ongaro capitalising on an error from Pacific keeper Callum Irving to poke home from no more than a yard out.

Sparked into life, Pa-Modou Kah’s outfit clicked into gear and Welshman Josh Heard got his side level, quickest to react as the ball broke loose in the area. After a huge claim for handball was turned down, Pacific were left chasing the game with just five minutes remaining, and then, it was star man Marco Bustos whose left-footed effort found it’s way delightfully into the top-left corner to grant the Islanders an extended stay in Charlottetown.

This all meant Cavalry FC, Pacific FC, HFX Wanderers, and Forge FC made it through to the group stage finals while Valour, FC Edmonton, Atletico Ottawa, and, surprisingly, York9 all head back to their mainland homes.

Loading...
Newer Post
Georginio Wijnaldum Could Be As Important For Barcelona As He Has Been For Liverpool
Older Post
Julen Lopetegui’s Redemptive Tears In Cologne After Enduring Real & Spain Saga