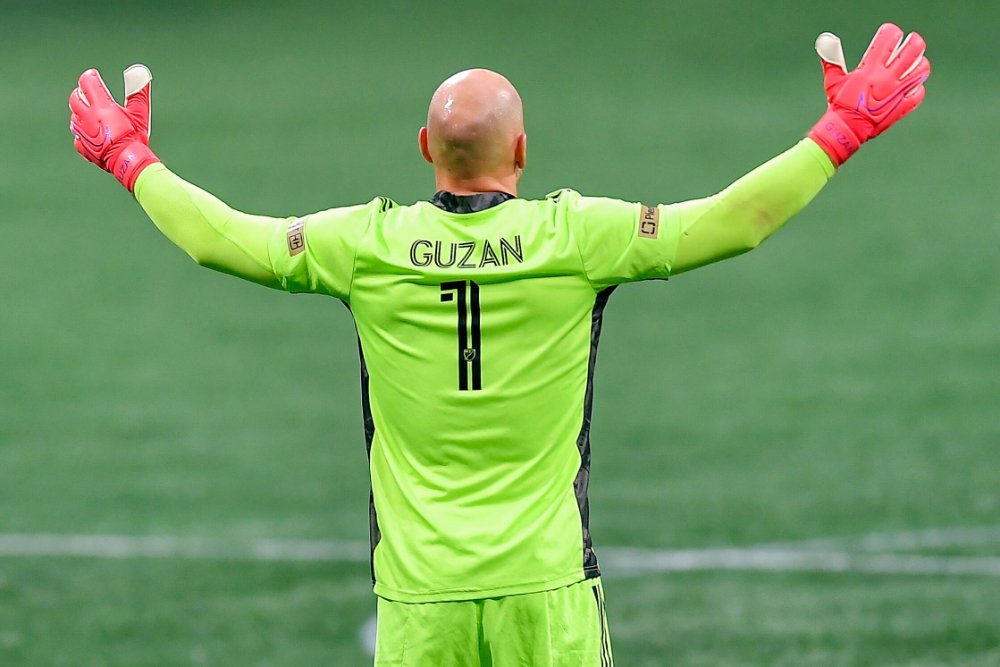 Chicago Fire backed up their 4-0 win over Houston Dynamo with a 2-0 victory against Atlanta United on Sunday night.

The Fire struck early as Fabian Herbers slipped the ball beyond Brad Guzan after Gaston Gimenez had forced a turnover in midfield in the seventh minute.

Atlanta seemed to get a grip of the match following the opening goal and could have found themselves level on a number of occasions but wastefulness and an inspired performance from Bobby Shuttleworth between the posts kept the 2018 MLS Cup champions at bay.

And the job was completed for Raphael Wicky’s men in the 39th minute when Robert Beric beat the offside trap to connect with a Djordje Mihailovic through-ball, smartly finishing past Guzan.

FT: @ChicagoFire hold on to their lead and secure the win! #CHIvATL pic.twitter.com/JMijEjFsWQ

The result moves the Fire one point above Atlanta in the final Eastern Conference playoff spot, but what did we learn from the match itself?

At this point, it feels like something of a trope to keep mentioning how much this Atlanta United midfield misses Darlington Nagbe but, well, it does. Badly.

Sunday night was another fine illustration of the big hole the now-Columbus Crew man has left, with the Fire’s holding pair of Gimenez and Alvaro Medran smothering the Five Stripes both in and out of possession.

The duo clocked up first-half pass success rates of 89% and 96% respectively, compared to just 70% for Jeff Larentowicz and Eric Remedi. By the end of the game, those numbers stood at 88 and 89% for the Chicago partnership.

It was Gimenez pressurising Remedi and forcing the mistake out of the Argentine which allowed him to create the chance for the first goal, while Medran kick-started the move for Beric’s strike to make it 2-0 with a fantastic line-breaking pass through the midfield.

By contrast, Glass’ midfield failed all night to generate any sort of fluidity in possession, with Atlanta’s most dangerous moments coming from moves out wide and crosses into the box, while they simply couldn’t get near Chicago’s slick, quick passing sequences — a worrying statement given the Fire’s disappointing season so far.

Marcelino Moreno is on his way from Lanus to charge up Atlanta United’s midfield and on the evidence of Sunday’s showing, that cannot come soon enough.

2. Shuttleworth Pulls Out All The Stops

For all of Atlanta United’s struggles, they still managed to sustain periods of dominance in this match, creating chances through the sheer speed of their wing-backs. The Five Stripes managed five shots on target in total, generating of 1.30 xG. In short, they should have registered something on the night, even if it was just a goal.

Chicago can thank the efforts of veteran goalkeeper Shuttleworth for keeping the Five Stripes out, with the 33-year-old in dazzling form all night.

The former Minnesota United man twice denied Adam Jahn from close range, parrying away a volley in the first half and tipping a diving header onto the post into the second. Each save showcased great positioning and lightning-quick reactions to keep the Five Stripes off the scoreboard.

Franco Escobar came incredibly close with a header from a corner during the first half but diverted the ball just wide, while Jake Mulraney missed a golden chance at the far post after the break but Shuttleworth had more than earned that sort of grace with some match-saving moments.

With both sides coming off the back of morale-boosting wins but still generally struggling for confidence, the first goal was always going to be vital in this one. A combination of Atlanta generating the second-lowest xG (9.9) in MLS this season prior to kick-off and the Fire being experts in the opening 15 minutes at home made it highly likely to be Wicky’s men that would strike first.

And that’s exactly what happened as the Fire gobbled up Atlanta’s midfield and stung in transition through Herbers after just seven minutes.

Not only did that set the tone for the rest of the match, but it also meant the Fire had scored in the opening 15 minutes of all four of their home MLS matches back at Soldier Field this season.

As for the Five Stripes, they’ve now lost eight and drawn one of the nine games in which they’ve conceded first this season. A worrying trend and one which highlights the serious lack of confidence and backbone running through this squad.

Loading...
Newer Post
Lampard As Much To Blame As Silva For Chelsea’s First Half Collapse vs West Brom
Older Post
Football Returns To The Fore At Barcelona After Uncertain Summer – Barcelona 4, Villarreal 0