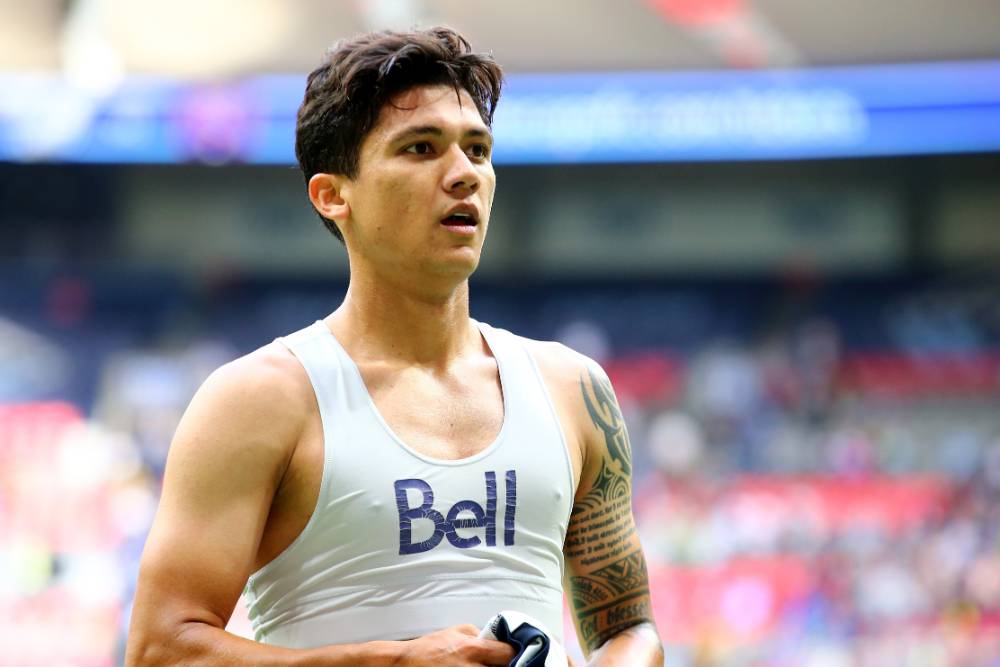 The Vancouver Whitecaps recorded back-to-back wins for the first time since May 2019 on Saturday night with a 2-1 victory over Western Conference rivals Real Salt Lake.

Having made the trip to Sandy, Utah on Friday, the ‘Caps came into Rio Tinto Stadium highly motivated after a sparkling performance from Colombian striker Fredy Montero in their 3-1 win against the Montreal Impact to end their three-game home run.

Saturday night proved no different, as Montero was once again a vital part of Vancouver’s attack, more on that later.

As for the home side, Real Salt Lake were coming off some mixed results, with a statement 3-0 win against LAFC on September 9th and a troubling 5-0 home loss to their Rocky Mountain rivals Colorado Rapids three days later.

A win in this match would prove vital for both sides, with three points separating sixth and tenth in the Western Conference play-off race prior to kick-off.

The first half of the match proved to be a stalemate, with neither side generating any clear-cut goalscoring opportunities.

However, Vancouver came out of the half-time break looking like the better side and finally broke the deadlock seven minutes into the second half to take the 1-0 lead.

‘Caps Midfielder Janio Bikel picked out Montero in loads of space at the top of the RSL box, where the striker turned and played a superb chipped ball into the path of his countryman, Cristian Dajome.

The speedy winger was able to control the ball calmly and played it across the area for former Hearts man David Milinkovic, who scored his first MLS goal after previously telling the media of his desire to get off the mark in a Whitecaps jersey in midweek.

A deserved goal for the Frenchman looked to be the winner as RSL veteran Kyle Beckerman was shown his second red card of the season after following through with a kick to Vancouver goalkeeper Thomas Hasal’s head.

Even with 10 men, Salt Lake continued to push for the equalizer, knowing how tight the standings were in the Western Conference.

The home side were able to find an answer nine minutes from time as winger Maikel Chang whipped a ball to the back-post for Iraq international Justin Meram to head home the equalizer from close range.

But there still proved to be more on the cards.

Just three minutes later, Whitecaps youngster Michael Baldisimo made an incredible cross-field pass to Montero in behind and the Colombian squared it across for substitute DP striker Lucas Cavallini, who turned the ball in to give the ‘Caps three massive points in the play-off race.

These were the starting lineups for each side:

Your #VWFC Starting XI for #RSLvVAN, delivered with @DoorDash pic.twitter.com/jzpoRAx0Go

Marc Dos Santos only made one change to the XI that beat Montreal 3-1 in midweek, with Ali Adnan coming in on the left wing for Canadian youngster, Theo Bair.

Meanwhile, Fredy Juarez made three changes from the side that dropped the 5-0 result against Colorado, with Beckerman, Marcelo Silva and Pablo Ruiz coming into the lineup for Everton Luiz, Justen Glad and Corey Baird.

After scoring his first two goals of this unusual MLS season against the Impact in mid-week, Montero was at it again on Saturday night, proving to be a key figure in the attack for the ‘Caps with some great hold-up play, as well as some number 10-esque creativity.

The former Sporting CP man did everything besides score against RSL, spraying balls all over the field, combining with his fellow attackers and playing a major role in both goals for Vancouver.

In the first goal, Montero received the ball from Bikel right in front of the Salt Lake backline and made a very simple movement we haven’t been used to seeing from Whitecaps forwards this year; turning towards goal.

Instead of being conservative and probably playing a pass back, Montero turns towards goal to play an incredible chipped pass in behind to Dajome with the perfect weight, almost as if he’s playing the role of a number 10.

It’s not the first time we’ve seen the Colombian turn provider in such creative fashion, but the turn is a very simple component of the goal and it’s something Cavallini or Bair don’t provide when they’re up top for this Vancouver team, which shows how big of an effect Montero has had in turning defence into attack in these last couple games.

Moving on to the second goal where Montero again turns provider, bringing down a wonderful cross-field ball into his path on a clean first touch and putting the perfect ball across the area for Cavallini to finish.

Expect to see more of these two up top in the future, given Cavallini is a more physical player that relies on service while Montero fits the bill of a false nine, often dropping back into the hole between the opponent’s midfield and defence to create chances for his attackers or have a go himself. 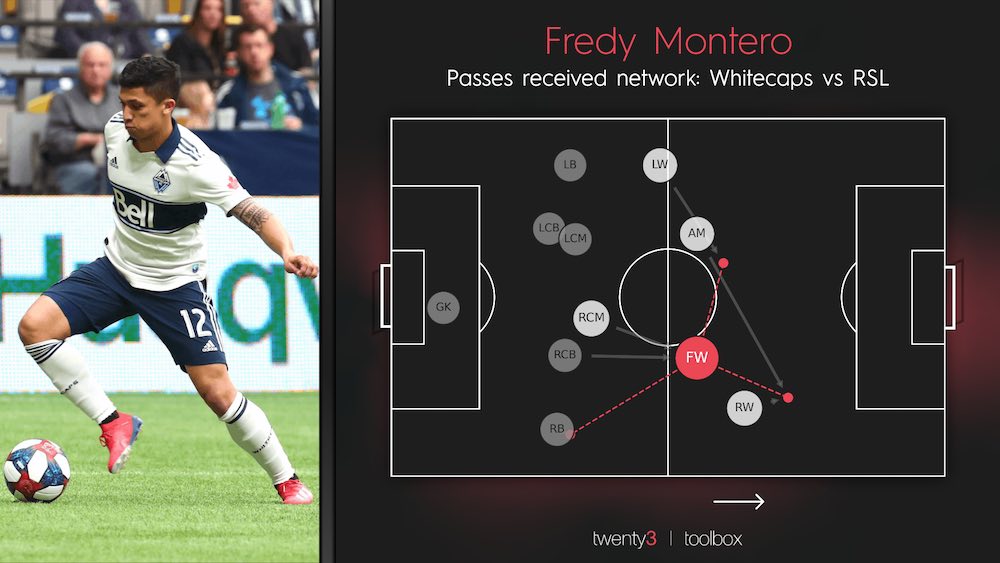 Montero has proved himself again to his manager after a lengthy spell on the bench and, as you can see from his most recent performances, could prove to be a key figure for the ‘Caps in their quest to reach the MLS Cup Playoffs for the first time since 2017.

Onto another strong Colombian performance from Vancouver, Cristian Dajome has recently stepped up his game for the Blue and White.

The winger was influential in Milinkovic’s goal, as seen above, but throughout the match, he combined very well with his countryman Montero and made darting runs in behind or along the touchline to stretch Salt Lake’s shape.

Given the home side’s line-up didn’t have much pace at the back — with Marcelo Silva partnering Nedum Onuoha and Kyle Beckerman in front of them — it made sense for the Whitecaps to use their pace as an advantage to not only put Dajome in one-on-one situations, but also free up space for Montero and Milinkovic to find the pockets in midfield.

The former Atletico Nacional man was a big part of that and has recently been boosted in confidence by the fact his wife, along with two daughters, have finally been able to move to Vancouver due to the lengthy delay of travel restrictions in Bogota, Colombia from the coronavirus pandemic.

The player’s family was able to secure a direct charter from Bogota to Vancouver, giving Dajome the tranquillity he needed to focus on his play for the Whitecaps, while knowing his family is now safe with him in the city.

Back to his performance in the match, Dajome registered three key passes, which is something Whitecaps wingers haven’t done much in recent times, along with the assist, one shot and two tackles.

As you can see in the graph below from Twenty3, most of Vancouver’s possession going forward came down the right flank with Dajome, so the ‘Caps were definitely doing their best to make use of the Colombian’s pace and trickery out wide. 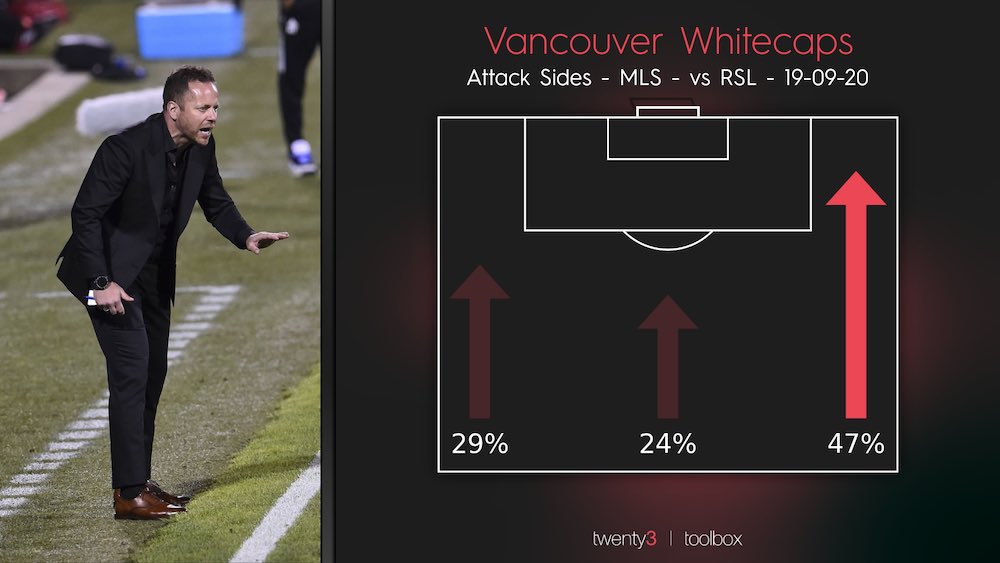 Expect Dajome to continue combining with Montero and becoming a true offensive outlet on the wing for the ‘Caps as the recent departure of Peru international Yordy Reyna to DC United should give the Colombian more chances to show his attacking prowess.

The Whitecaps now sit in seventh place in the Western Conference with 15 points, currently accompanied by LA Galaxy (eight), LAFC (ninth) and Houston Dynamo (tenth) for the same points total.

Not much separates the top of the West.

the standings heading into Week 13. pic.twitter.com/89afxzkS9f

They’ll now head to California to take on play-off contenders LAFC on September 23rd in yet another must-win game, while Real Salt Lake will look to bounce back and put themselves into the play-off conversation with a home match against LA Galaxy on the same day.