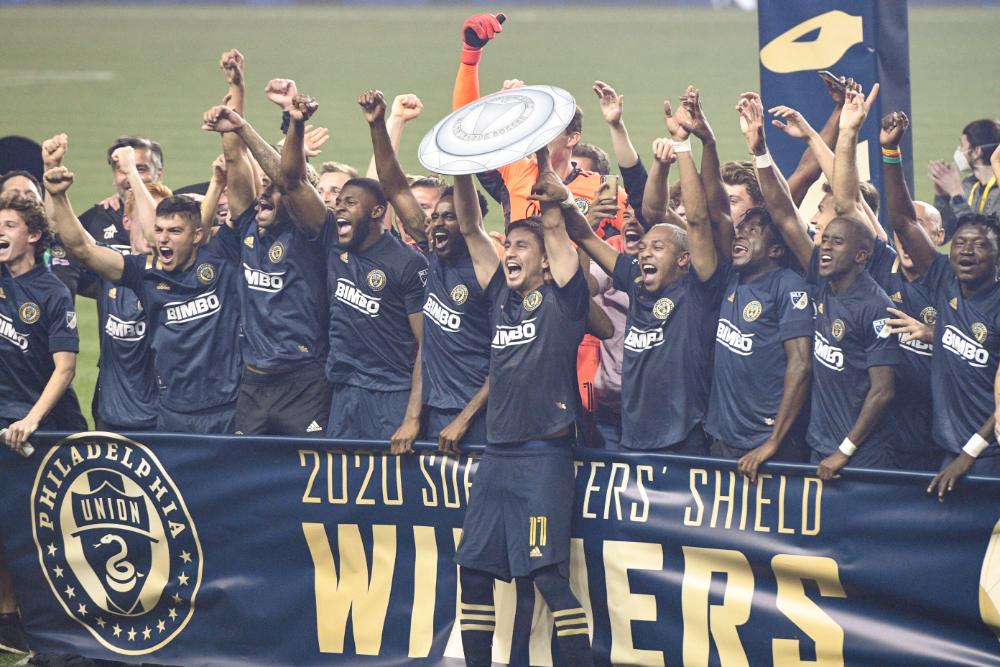 For the first time in their history, Philadelphia Union enter the MLS Cup playoffs as Supporters’ Shield champions.

Finally, at the end of an arduous and incredibly disrupted regular-season, the Union sealed a first trophy in club history on Decision Day on a points-per-game basis, with Sporting Kansas City (1.86) Philadelphia’s (2.04) closest challengers.

With a limited number of fans fittingly allowed back into Subaru Park, celebrations erupted at the end of the Union’s 2-0 win over New England Revolution, with this the fruit of six year’s labour for manager Jim Curtin and over a decade for those behind the scenes.

Well deserved Supporters’ Shield winners, Jim Curtin’s side will be among the favourites to win the #MLSCupPlayoffs too

Some will try to put an asterisk next to the Union’s win thanks to the huge disruption caused by the coronavirus pandemic, which has resulted in a stop-start schedule and teams playing each other on a regional basis.

However, the Union have been steadily growing over the years and Curtin deserves immense credit for knitting a title-winning squad together, centred around homegrown talents such as Mark McKenzie, Anthony Fontana and RB Salzburg-bound Brenden Aaronson. Nobody in Philadelphia likely cares about whether or not the wider MLS fanbase will place an asterisk next to 2020.

“I’m really proud of the accomplishment of winning the Supporters’ Shield. I think it’s a very difficult trophy to get, one that shows real consistency [and] resiliency through the course of the full season,” Curtin told reporters after the clinching win over the Revs.

Now, with the dust settling nicely upon the shield — providing, of course, the real trophy has finally arrived in Philadelphia — the Union’s focus will shift to the playoffs and winning MLS Cup for the first time in their history.

This is the story of how a Captain America shield, complete with 150 lb force magnet, became the Supporters’ Shield.

I’m told the true, forged by the supporters Shield didn’t arrive from LA in time, so the @PhilaUnion got creative. pic.twitter.com/nld62pyGzi

However, to do so, they’re going to have to break a long-standing trend in Major League Soccer. A curse so strong, it has derailed the dreams of the New York Red Bulls three times — including with Thierry Henry in the side in 2013 — LA Galaxy on a number of occasions and even, most recently, the record-setting Los Angles FC side of 2019.

The “curse” of the Supporters’ Shield is one that doesn’t hold every year, but is strong enough to have struck 14 of the last 17 regular-season champions, with only Columbus Crew (2008), LA Galaxy (2011) and Toronto FC (2017) managing to go all the way in both.

Given the number of young players Curtin has flooded his squad with, you could argue that any such “curse” would be a mere afterthought at most. After all, even if they are inexperienced, rising stars of the game are free of the burdens of past defeats and disappointments.

When asked about the past record of Supporters’ Shield winners in the playoffs, Curtin himself dismissed the “curse” as a myth and insisted he and his players are worrying about things that are in their control.

“I’m aware of it,” he told reporters at a press conference on Thursday. “Look, if we had a full 34-game season this year, we’d be up around almost 70 points, which almost touches LAFC who set the record just last year.

“Good teams are good teams, I don’t believe our players are too aware of or even nervous about that. Do I believe in curses? No. I believe that consistency, good soccer on the field and the five phases we talk about — with the ball, without the ball, offensive transition, defensive transition and restarts — if you’re solid in those phases, you can do some damage in the playoffs.

“I believe our group is set up well to make a run, we have home-field [advantage], which is on us.

“Maybe with the Supporters’ Shield, even though the rules change and shift every year in terms of home games, when you do have home games there might be a little bit more feeling of that pressure, then it’s up to the staff and the coaches to create an environment where the players don’t feel that pressure, they just feel the need to perform the same way they did all year.

“Yes, there’s more pressure at this time of the year, for sure. Do I believe in the Supporters’ Shield curse? No. I do believe that it’s hard to lift that MLS Cup trophy, though, and again, everybody has a bullseye on your back when you do win [the shield], so that maybe makes it a little bit more challenging.”

Having defied the odds once already to lift the shield in the first place, the Union will have do so once again to lift MLS Cup, as well as erasing most of the history made by regular-season champions down the years.

But with this fearless group of kids backed by a manager unfazed by curses and supposed higher powers, you’d be a fool to bet against them tearing up the odds once again in the playoffs.