The Football Match That Sparked The Rojava Revolution 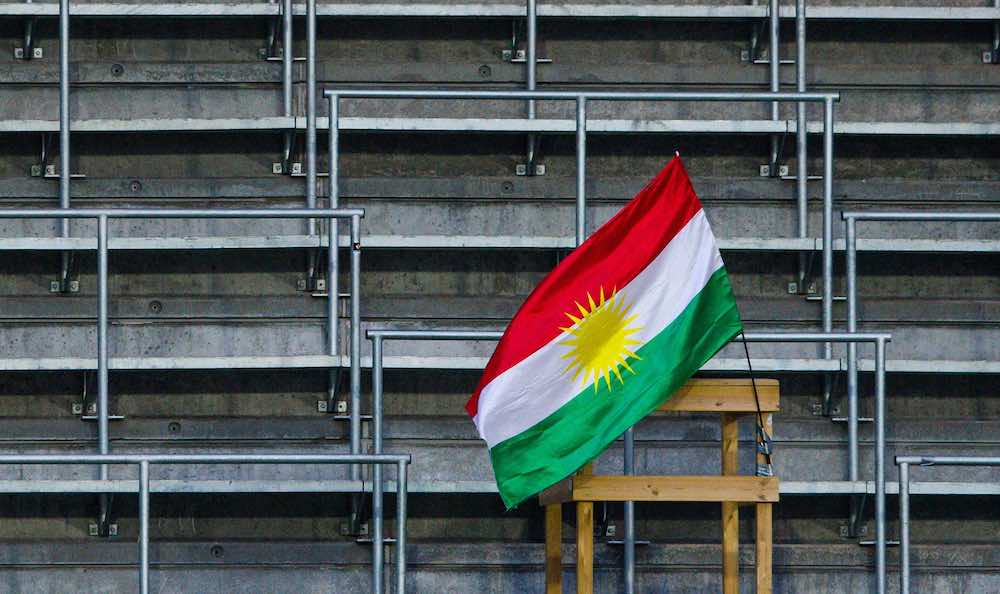 Football has a lot to do with conflict and chaos. The conflicts it generates can be wrapped in various sentiments: religion, politics, identity, etc.

As an example, we can see the eternal feud between Rangers and Celtic that divides the Scottish city ​​of Glasgow. The rivalry is often seen as representing the tension between Protestants (Rangers) and Catholics (Celtic).

We can also see the conflict between left-wing and right-wing supporters in Italy, as in Livorno’s clash (left) against Lazio (right). Social and political conflicts seem to be an integral part of football.

In many cases, the conflicts that emerge from football are not solely due to shallow sentiment but often based on more radical things.

At its most extreme, football has become an arena for political power contestation; including war, rebellion, and even revolution.

This has been epitomised by the type of football conflict that happened in Syria — or to be precise, in Qamishli.

In 2004, a riot started at a football match between Al-Jihad SC, a local Kurdish club; and Al-Fotuwa SC, an Arab club from the city of Deir ez-Zur.

Alan Hasan and Jandi Khaldi examine the history of Al-Jihad SC, a football club that mirrors the diversity of the society in #Qameshli. #Syria https://t.co/Ix0JgdRY9b

The rioting was peppered with ethnic and political sentiments between Kurds and Arabs who have a long history of conflict. The rioting later led to a wave of protests and a massive uprising by Kurds against the Syrian government.

Before we discuss how a football match ignited an uprising and even revolution in Syria, it is important to know the historical and political context of the Kurds in the Middle East and especially in Syria.

The Kurds are a marginalized ethnic group in the Middle East. They are scattered in various parts of the region, in Iraq, Iran, Syria, and Turkey. The Kurds are equally ‘unrecognized’ in those four countries.

They are often discriminated against and oppressed, and sometimes Kurds are not even considered legal citizens.

In 1962, Kurds who previously held citizenship cards in Syria saw these ID cards confiscated by the state. They are then labelled as ajanib or foreigners. The implications of this is that Kurds in Syria do not have access to fundamental facilities and don’t have the rights of a citizen — such as health care, workers rights, and education.

In the 1970s, the Syrian government aggressively carried out ‘Arabization‘. They moved the Arab population into areas previously inhabited by Kurds and took over — or perhaps plundered — land from Kurdish peasants to start building complexes and settlements for Arabs.

Kurds do not remain silent; they often resisted and demanded recognition of cultural differences. On several occasions, Kurds have also been involved in protests against the government of Syria. 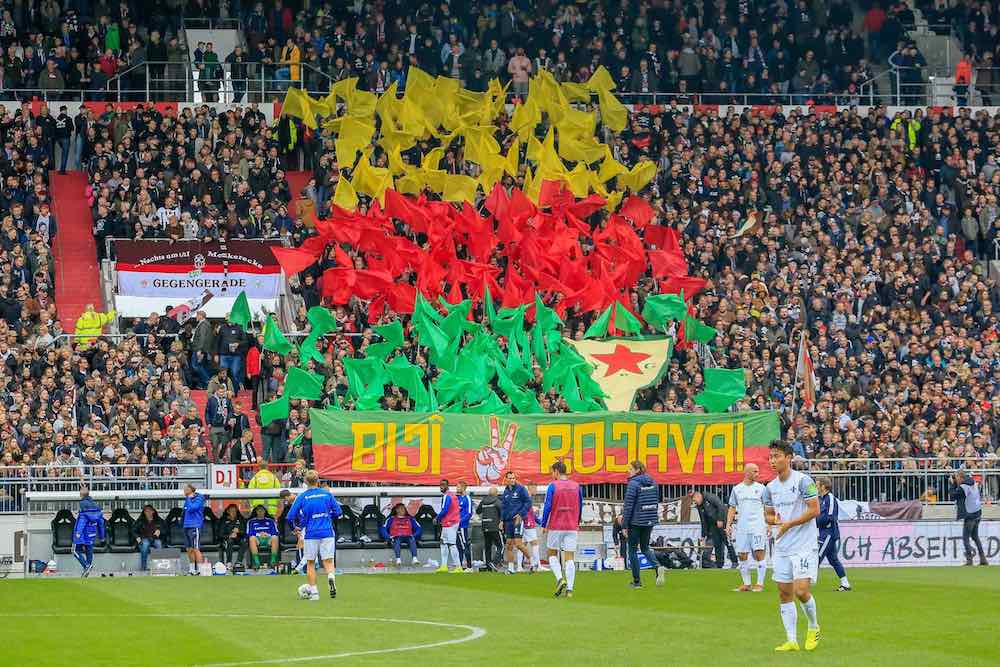 A Football Match and the Qamishli Riot

The discriminatory and oppressive policies of the Syrian government eventually caused friction between Kurds and Arabs. The animosity between the Kurdish minority and the Arab majority has been nurtured for a long time. The oppressed Kurds’ anger was a ticking time bomb ready to explode at any moment. They appeared to be just waiting for a spark to trigger it.

And surprisingly, it turned out that the spark was a football match in the city of Qamishli. The city has the highest Kurdish population in Syria and became the centre for cultivating the Kurds’ spirit of struggle and resistance.

When Al-Jihad played Al-Fotuwa on March 4, 2004, the two groups of supporters threw insults at each other, and the taunts could not be separated from the identity and political sentiment between the two sides.

Al-Jihad supporters started raising a Kurdish flag. Tension heated up when the supporters of Al-Fotuwa insulted Kurdish leaders or politicians such as Massoud Barzani. They also displayed a photo of Saddam Hussein on the streets of the city of Qamishli — this act was an insult to Kurds, as Saddam Hussein had carried out a massacre of Kurds in Iraq in the late 1980s.

Of course, that infuriated the Al-Jihad supporters who immediately responded to the attack on the Kurds by shouting chants who cheered George Bush. They did that because, in 2003, the United States under President George Bush invaded Iraq and then brought down Saddam Hussein. The fall of Saddam Hussein has also provided a quick way for Kurdish autonomy in Iraq.

As a result of reciprocal ridicule and insults, physical conflict becomes inevitable. Al-Fotuwa supporters began to attack the Kurds with various weapons. The Kurds retaliated, and in an instant, riots broke out in the city of Qamishli. On that day, reports from Aljazeera indicated that at least six people were killed. All six were Kurds. They were getting angry, and the rioting continued.

The government immediately deployed the security forces, but this only complicated the situation as many Kurds were getting beaten up and even shot. The anger of the Kurds was getting more intense, and they were busting out onto the streets.

The riots which began at a football match escalated into large scale riots and anger towards the oppressive Syrian government. The supporters’ conflict was later turned into an arena of rebellion by Kurds against the Syrian government. In the two days, riots and resistance soon spread in other cities. It became a moment of solidarity for the Kurds.

The riots’ climax came when Kurds in the city of Qamishli tore down a statue of the former Syrian president, Hafez al-Assad and set fire to the Ba’ath party office. The government immediately responded by sending in police and military forces. The Kurds were suppressed and the authorities managed to take over the city. At least 30 Kurds died in the rioting. 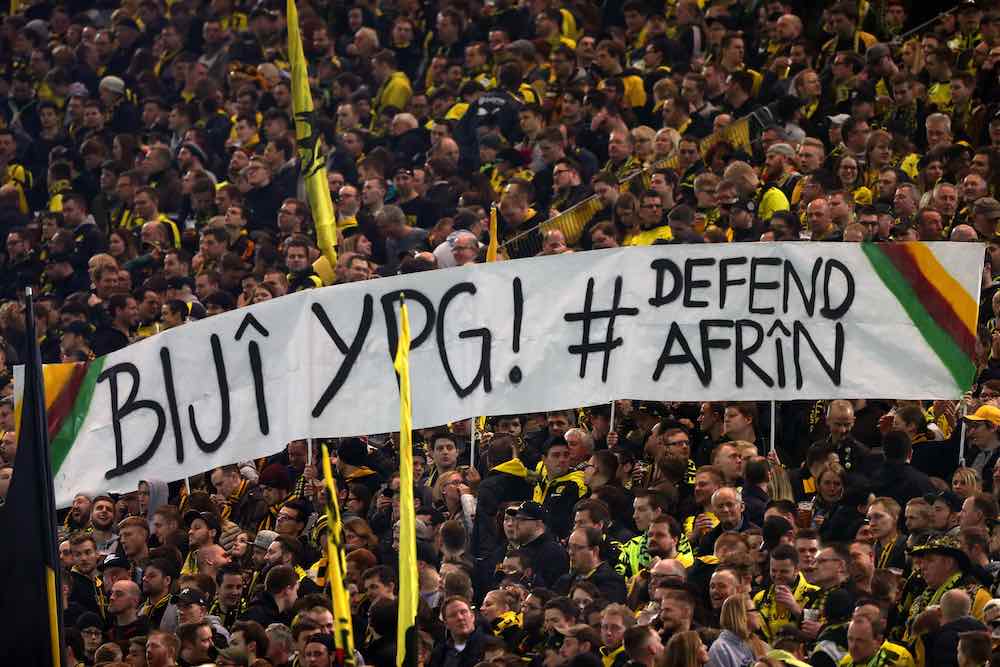 11-03-2018 – Dortmund Signal Iduna Park – Borussia Dortmund SG vs Eintracht Frankfurt – Banner of the BVB Faninitivative Ballspielverein BIJI YPG Defend Afrin as solidarity with the Kurdish citizens in the fight against fascism in Rojava.

After the Qamishli riot, many Kurds fled to Iraq with UN assistance. However, in Syria itself, Kurdish resistance is undoubtedly not abating. They continue to strive for and demand autonomy, freedom, and even independence.

In late 2011, the Kurds began to organize themselves and carry out armed uprisings to seize several Kurdish-majority Syrian cities.

Rebellions continued for months until the Kurds succeeded in liberating themselves in Qamishli, Efrin, Amûdê‎, and Kobane.

They then declared that the cities they had captured were utterly autonomous, independent, and separate from the Syrian government. The Kurds then launched a revolutionary effort to form a people’s government through the Internationalist Commune of Rojava.

To this day, the Kurds of Rojava still maintain their revolutionary efforts in all spheres: cultural, political, social, and economical. The history of the Rojava revolution, or the struggle for Kurdish liberation, will always show that the football match in Qamishli in 2004 was an important event for Kurds. The fuel set off the earliest wave of revolution.

The match was and will always be an essential episode in the Kurds’ quest to liberate themselves. Every March, Kurds still commemorate that match and the days of rioting that followed it.

The same thing has happened in other places. In Saudi Arabia football is always closely related to conflict and politics. Al-Ahli supporters had been involved in the revolutionary protests to overthrow the Mubarak regime in Egypt. Or Al-Wehdat supporters in Jordan who dare to sing the Palestinian revolutionary chants at a time when nationalists dominate the Jordanian football scene.

The Qamishli riots and the Kurdish struggles show us that football can indeed be political. Football can always be an arena for the contestation of interests, so conflicts become very attached.

As Russell Holden and Paul Gilchrist say in their 2011 work The Politics of Sport – Community, Mobility, Identity; football, or sport in general, is an element of the culture that can be a show arena of ideas that exist in society, but football can also be the arena of political show, conflict, and struggle.

The football match between Al-Jihad and Al-Fotuwa in Qamishli in 2004, and the Rojava Revolution which followed, is a prime example, not only of political and social tensions within the football arena, but also of how football can even be a vehicle for uprisings and possible political or social change.