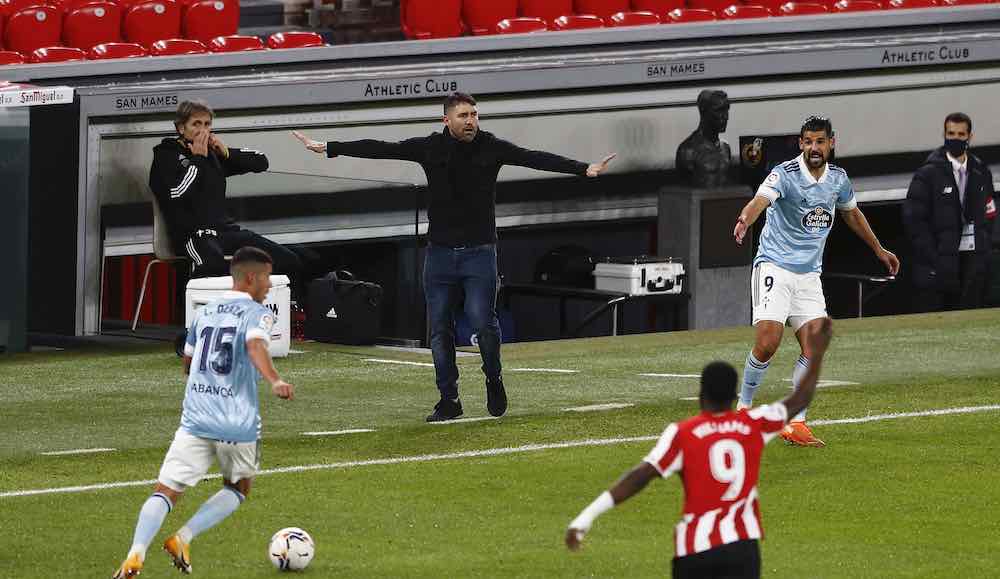 In the six games since Eduardo Coudet was appointed manager, Celta Vigo have jumped from 17th to 8th in La Liga. Only Atlético and Real Madrid have accumulated more points in the time since his appointment.

Not only has the Argentine manager brought an upturn in results, but he has also successfully introduced an entertaining and tactically astute style of play, getting the best out of his key players.

The Coudet Effect – What is his Style of Play?

In his six matches in charge, Coudet has played a 4-1-3-2. This midfield includes the Peruvian Renato Tapia, who arrived on a free from Feyenoord in the summer. Tapia has proved crucial to Coudet’s plans.

Stationed just in front of the back four, he offers quick passing options in the build-up, as well as stopping counter-attacks in defence.

“Honestly, I didn’t know who he was when Celta signed him,” said the Spaniard. “But ever since training [with him] I’ve seen that he’s a great footballer, he’s showing it each game. He’s a very important player for us.”

In front of Tapia, Iago Aspas has been in incredible form with five goals and seven assists under Coudet. This is reminiscent for of how Coudet was able to get the best from Lisandro Lopez at Racing Club in their title-winning 2018/19 season. Lopez won the golden boot that season in the Argentine Primera División with 17 goals.

Much like his Racing side, Celta Vigo have become fairly possession-based under Coudet. His style of play encourages short passing in midfield and among the back four. Celta now look to take the initiative in games, very often opting for a high defensive line.

At Racing, Coudet was great at getting the best out of his players, young or old. Matías Zaracho thrived under the Argentine in their title-winning season, with the 20-year-old operating as a playmaking midfielder. His role was often to combine with the holding midfielder and link play from the back four to the wingers.

As with any successful tactical system, the role of one player is aided by the actions of every other player. This was crucial for Racing under Coudet, and under his influence, every action by one player could be helped by the others.

For example, when a midfielder like Zaracho dropped back to assist in build-up play and get the ball wide, the marauding full-backs would launch forward to create wide overloads.

At Celta, Coudet has been using Denis Suarez as his playmaker in the midfield, often dropping back to assist Tapia in the build-up. Coudet’s eagerness to play youngsters at Racing was clear, and this season he has given starts to 20-year-old Miguel Baeza.

Patterns are emerging which suggest Celta will reflect the system Coudet used at Racing.

Another goal and an assist for Iago Aspas as #celta go 2-0 up. What a great job Eduardo Coudet is doing at the club. pic.twitter.com/kz4GCnsus9

Coudet took over from Òscar García at the Galician club and it was hard to see the situation getting much worse.

García won just 6 games from 35 league games in charge. This meant his win percentage was 17.1% — the worst in the club’s La Liga history.

However, Coudet has impressed enormously in his short time in Spain. According to Understat, before his arrival, Celta Vigo had an xG of 12.1 and in the six games since, that number has gone up to 23.9.

In these six games, they have dominated the ball having over 60% possession in three games and only against Sevilla did they have less than 50% of the ball

This isn’t just style over substance, either. The Argentine has shot Celta up the league. Gathering results by playing a style of football that is great to watch and gets the best out of his best players.

Considering how unpredictable La Liga is proving to be this season, if this style of play is sustained and the results continue, the Coudet effect could produce great results for the Célticos.