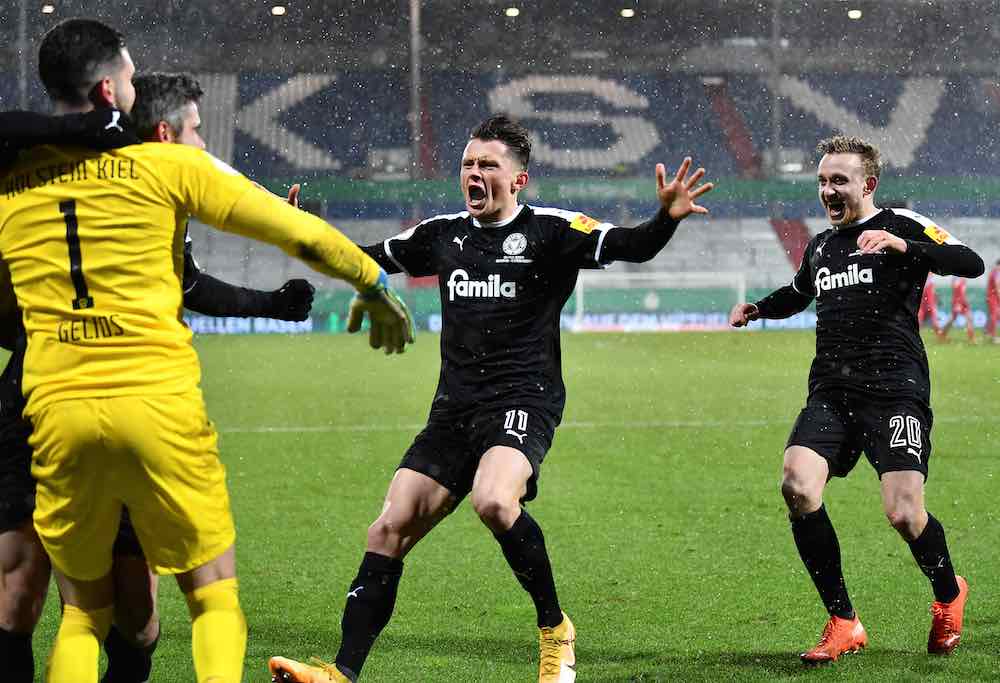 The name of Holstein Kiel is not likely to be a familiar one to football fans outside of Germany. It’s unsurprising, as this small club on the Baltic coast of northern Germany has never been in the top flight of German football.

Indeed, Germany’s most northerly state of Schleswig-Holstein has never had any representation in the 1.Bundesliga.

This season, however, Kiel have been making history and the best may well be yet to come.

Their consistent efforts in the 2.Bundesliga have them pushing title favourites and fellow northern club Hamburger SV all the way, but it is their exploits in the DFB Pokal (Germany’s domestic cup competition) that have really brought them attention.

It was no surprise to see Hansi Flick’s Bayern Munich adding a World Club Championship to their incredible trophy haul. It was, however, a monumental shock to see them eliminated from this season’s DFB Pokal at the hands of Holstein Kiel.

WE HAVE BEATEN THE CHAMPIONS OF EUROPE!!!!

Don’t be under the misapprehension that Bayern must’ve fielded a team of reserves — Flick went with a very strong selection.

The same players who won the treble last season could not dispatch the plucky and well organised Kiel. 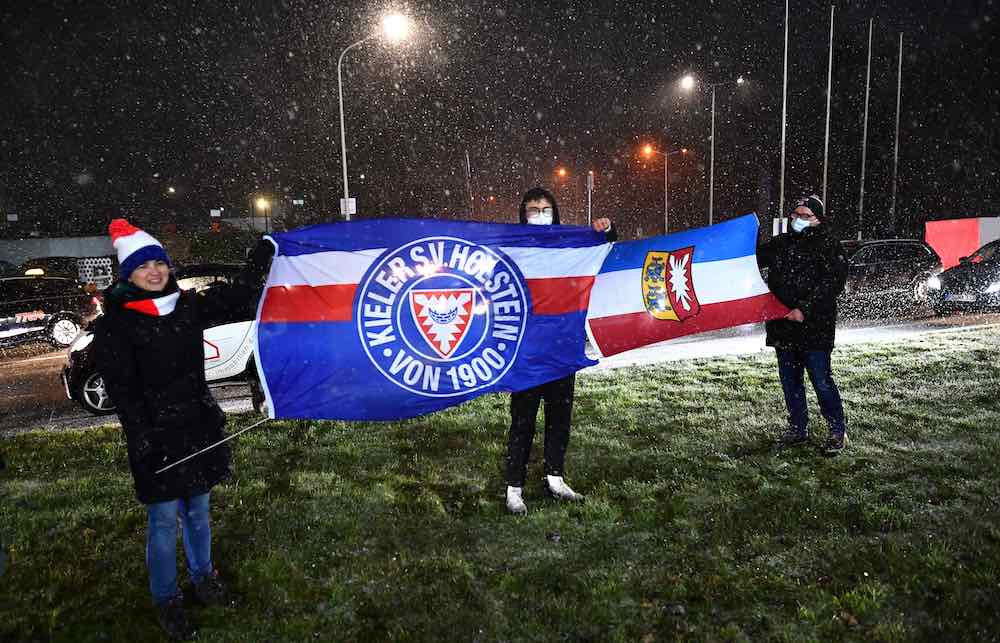 The club’s history officially dates back to 1900 via one of its founder clubs. In 1917, Kieler Fußball-Verein and Sportverein Holstein merged to become Kieler Sportvereinigung Holstein; or Holstein Kiel, as they’re more commonly known.

The club do have a German championship to their name but this came in 1912, long before the formation of a national league. Until 2013, the club had spent almost its entire existence in the amateur leagues.

Hoffenheim and Leipzig have famously enjoyed a rapid rise from regional football to the Bundesliga, but their success was built on ownership investment. Kiel has not had that luxury.

As with most other clubs, the financial impact of Covid has hit hard. Without the significant income from broadcasting deals enjoyed by those in the top flight, clubs further down the football pyramid rely on match-day revenue. The DFB Pokal run will have helped recover some of that lost income.

What that money cannot replace, though, is the atmosphere generated by fans.

Matt from @HolsteinKielEN, the Holstein Kiel English language account on Twitter, told WFi that in the intimate setting of the Holstein-Stadion, “the fans and players really pull together as one.”

It’s a real shame that the fans have not been able to be a part of what has already been such a memorable season. More so when considered that it may yet prove to be the most important in Kiel’s history. That bond between fans and team has been a vital part of their rise in recent seasons.

It’s a sense of togetherness that is replicated within the squad out on the pitch. Unity and opportunity are a hallmark of the club.

Matt from @HolsteinKielEN was keen to stress that Kiel are willing to give opportunities to ‘rejected’ players from bigger clubs.

Fabian Reese struggled to make the grade at Schalke and was farmed out on loan. He’s enjoyed his best season this year at hometown club Kiel.

Janni-Luca Serra is another; he was in the Borussia Dortmund reserve team that plays regional football, but he is now a regular starter for Kiel. The same can be said of midfielder Alex Mühling, from the reserve teams of Borussia Mönchengladbach and Bayer Leverkusen to a key role in the Kiel push for promotion.

In the absence of lucrative investment, clubs are forced to be smart if they are to succeed. Scouting, development and opportunity are fundamental ingredients to organic growth. Kiel provides those opportunities by giving young players and those cast aside by bigger clubs a platform to succeed.

Another part of their success this season is coach Ole Werner. Young coaches are not uncommon in German football and Werner is only 32. He already has a long history with Holstein Kiel, having been on the books as a youth player and coached at all levels since 2013. He was head coach of the second team for five years before taking over the first team in 2019. 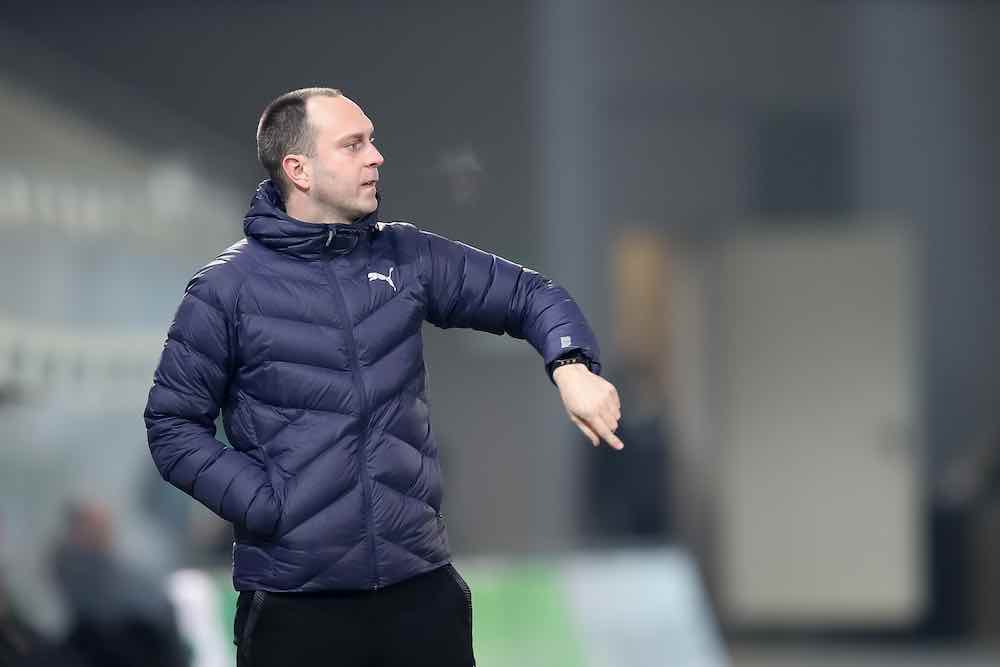 Despite his tender years, he is a smart tactician. This was evident in that famous victory over Bayern in the DFB Pokal.

This season is so much more than that victory over Bayern, though. The chance for promotion to the Bundesliga is very real. The title race couldn’t be tighter between four teams. It truly is an epic battle for promotion that is too close to call right now.

Holstein Kiel have been in this position before. Back in the 2018 relegation play-off, they lost out to Wolfsburg 4-1 over two legs. This year they have the opportunity to go one better, and more besides.

A DFB Pokal quarter-final awaits against fellow underdogs from the Regionalliga West division, Rot-Weiss Essen. Potentially, Kiel stand on the precipice of infamy. Whatever the outcome, there promises to be a party on the Germany’s north coast to celebrate the achievements of this historic season.

Loading...
Newer Post
The Worst Season In 116 Years? What Went Wrong For Botafogo In 2020?
Older Post
An Exciting Final Day In The 2020 Brasileirão Brought Tears And Joy