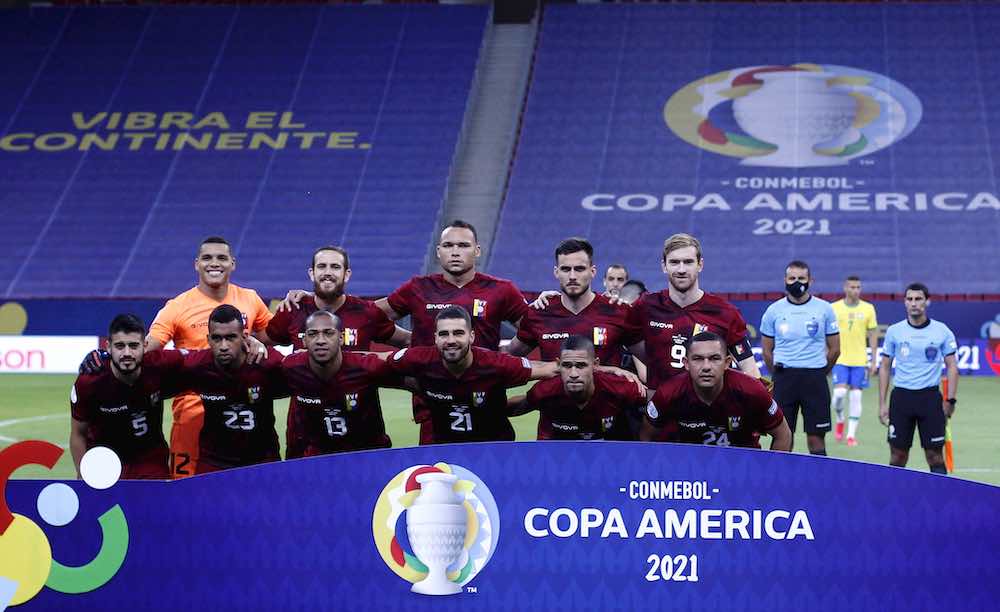 When the whistle blew for the opener of the 2021 Copa América, many expected last-minute hosts Brazil to trounce Venezuela. The record books, with 90 Brazilian goals and 22 victories in their 26-game history, pointed towards it, and an outbreak of COVID in the La Vinotinto camp as good as guaranteed it.

Already plagued by injuries to key men including Yangel Herrera, Yeferson Soteldo, and Salomón Rondón, the available pool of players Portuguese head coach José Peseiro had to assemble an XI from diminished further when, on arrival in Brazil, 13 of the delegation tested positive for coronavirus.

Have your commentator’s notes gone out the window with news of multiple positive COVID cases in the Venezuela team and the emergency call-up of 15 additional players?

🧶Thread: Here’s the backstory to their much changed and last minute Copa America squad: pic.twitter.com/GnmD9ap8ly

The day before the match, Peseiro confirmed speculation that 7 of the 13 were starters in last week’s World Cup qualifier with Uruguay (0-0) but did not go as far as naming them. Among local journalists, it was an open secret and included three of the defence: Roberto Rosales, Mikel Villanueva, and Jhon Chancellor.

With Yordan Osorio (injured) and Wilker Angel (COVID) not named in the tournament squad and now a further defensive trio of absentees, things became dire when shortly before kick-off a fifth centre back was ruled out for producing a ‘doubtful negative’ PCR test result: Nahuel Ferraresi.

Less than 24 hours before the match in Brasilia, the Venezuelan Football Federation had arranged for an emergency contingent of 15 players – 12 previously uncapped – to join the national team camp, and one would now end up starting.

The one was Deportivo La Guaira defender Francisco La Mantia, who was one of four Venezuelans to make their full international debuts in the eventual 3-0 defeat. Two of the other three were club teammates Adrián Martínez and Yohan Cumana, who completed the five-man defence along with Luis Mago and Alexander González.

For Martínez, it was moment he almost certainly never expected.

“Three days ago he thought he was going to watch the game on television,” José Santander, Martínez’s first professional coach, told journalist Fabiana Dos Reis. “That takes a certain character.”

Despite the loss, it was the latest in a steady string of achievements starting in 2018 when Martínez consolidated himself as a first division player after a stint in the second tier with Chico de Guayana.

After 40 top flight league games in his second spell at capital city side Metropolitanos, Martínez moved to Mineros de Guayana for the 2020 season, and was pivotal in their qualification for the Copa Sudamericana.

With the team struggling financially and the defender’s performances drawing attention, he continued his upward trajectory by joining reigning first division champions Deportivo La Guaira ahead of the 2021 campaign.

Head Coach Daniel Farías had to balance the defence of the title with group stage football in the Copa Libertadores, requiring heavy rotation. As an indication of his talents, Martínez was a preferred choice in the latter, even scoring a superb solo effort on his competition debut in a 1-1 home draw with Brazilian giants Atlético Mineiro.

🟠🇻🇪⚽ GOLAZO! Luis Martínez with the impressive individual effort to give @DvoLaGuaira the lead against @Atletico! pic.twitter.com/PY7KqaSbj3

A place in the national team, however, seemed a million miles away and only exceptional circumstances led to it materialising. On his first performance, Martínez has done no harm to his case for keeping it.
“I’m sure he never pressured himself when he was told he was going to be a starter,” Santander told Dos Reis. “He is there at the right time.”

Jordan Florit is the author of Red Wine & Arepas: How Football is Becoming Venezuela’s Religion and founder of @FUTVEEnglish