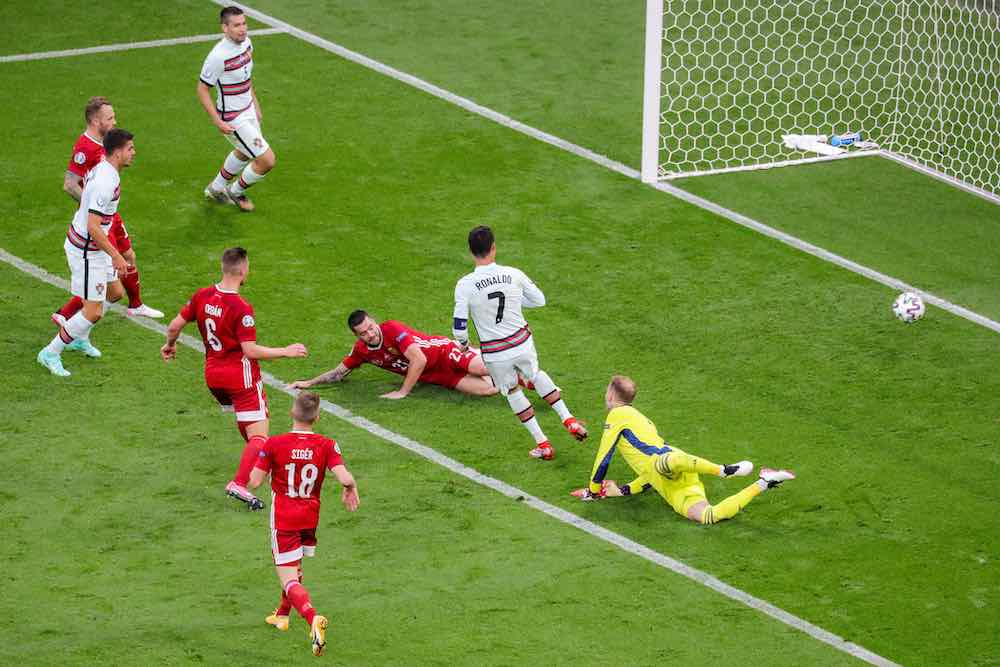 Prior to the match, Ronaldo had caused a stir as he removed two bottles of Coke placed in front of him and told the watching world to drink water instead.

But it was his performance on the pitch that everyone was talking about post-match.

The Portuguese started the tournament as the joint record holder with Michel Platini. The French midfield maestro scored nine championship goals during his illustrious career and Ronaldo joined him on that number in 2016 when he grabbed three on Portugal’s run to the final and eventual victory.

Ronaldo had a quiet game in Budapest but was prompted into action as the clock ticked down and helped Portugal secure a win in their opening fixture of Group F.

The 33-pass Portugal goal, in full, from above.

It was an 87th-minute penalty that allowed Ronaldo to overtake the great Platini and become the outright leading goalscorer, but the Portugal captain wasn’t done there as he finished off a lovely move, rounding the keeper to coolly slot the ball into the back of the net to go two clear of Platini.

The former Real Madrid ace first opened his account in the competition against Greece in 2004, before continuing to shine in every tournament since. It wasn’t just the goal-scoring record that the Juventus forward claimed last night — he also became the only player to play in five championships and the only player to have scored in five championships.

Even at the age of 35, the idea of Ronaldo competing at a sixth tournament in four years time – at the age of 39 – is not out of the question. It would be foolish to think this will be the multiple Ballon D’or winner’s Euros farewell tour.