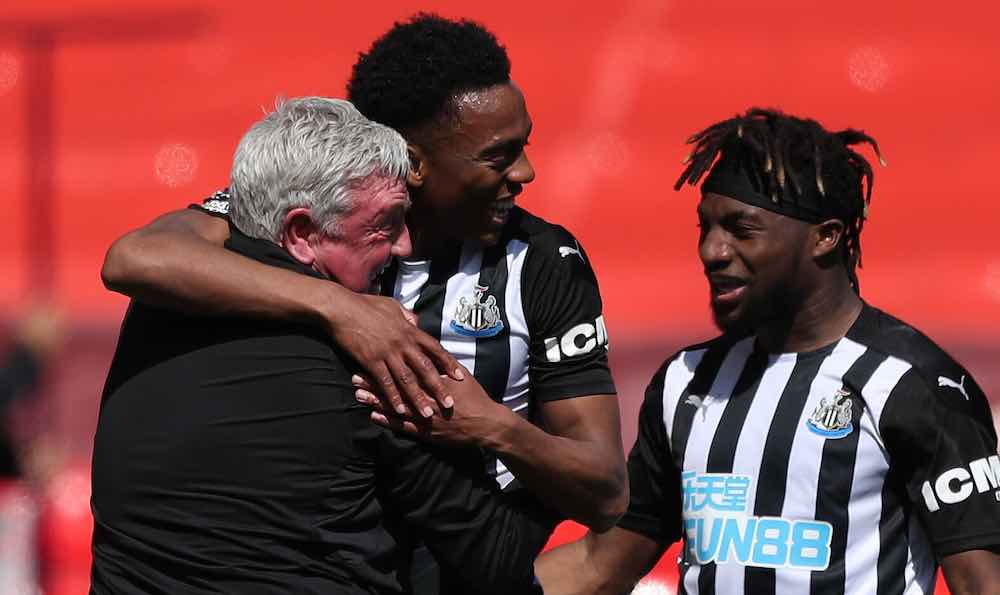 It’s no secret that Steve Bruce, the Newcastle manager, came under fire for much of the 2020-21 season.

However, despite the criticism, the 60-year-old led the Magpies to their highest Premier League finish since 2017-18.

After 38 matches, Bruce’s team ended the campaign 12th in the table with 45 points, 17 points above the relegation zone.

While Bruce, and indeed his lauded assistant Graeme Jones, deserve praise for turning it around at St. James’ Park, Newcastle were somewhat bailed out of a mediocre finish by on-loan midfielder, Joe Willock.

Having signed for the Magpies in the 2021 January transfer window, the 21-year-old scored eight goals in 14 appearances for the six-time FA Cup winners. So, was Willock the saviour of Newcastle’s season, or does Bruce deserve the credit?

A club of Newcastle’s history shouldn’t accept a 12th-place finish. However, relative to the team’s modern-day status, a near-mid-table finish is something of an achievement.

Unfortunately for the Magpies’ faithful, that says everything about the four-time First Division winners’ fall from grace.

Although the 2020-21 campaign didn’t feel like a step in the right direction, Newcastle have only once bettered 45 points in the Premier League since the 2012-13 season.

There can be no doubts that Bruce is worthy of praise after leading Newcastle to a strong finish, but he also deserves credit for recruiting Willock on a short-term loan.

It speaks volumes about Willock’s impact that he played a direct role in five Newcastle wins, and the Magpies only won 12 games all season. That said, for as good as the loanee was, Bruce undoubtedly got more out of his squad in the second half of the campaign.

In the final 16 matches of the 2020-21 Premier League season, the Magpies only lost five games, four of which came against Arsenal, Chelsea, Manchester City, and Manchester United. Moreover, Bruce’s team also kept three clean sheets in that time and drew against last season’s champions, Liverpool, at Anfield.

Following Newcastle’s 12th-place finish, Bruce has now turned his attention to the 2021-22 season. Like many teams, the Magpies struggled with injuries throughout the 2020-21 campaign.

The four-time First Division champions will welcome back their captain, Jamaal Lascelles, from a foot injury ahead of the new season.

Not only that, but the summer break gives Allan Saint-Maximin a chance to fully recover after picking up ankle, calf, and groin problems in 2020-21. Keeping the Frenchman fit is of utmost importance to the Magpies, who will hope that he will reach new heights next season.

Not only that, but there will also be pressure on Miguel Almiron to find some goal-scoring form in the 2021-22 campaign.

He offers goals from midfield, but the Paraguayan’s position will be under threat if Newcastle succeed in bringing back Willock to St. James’ Park. With Callum Wilson leading the line, few can argue that the Magpies squad lacks quality, but now it’s all about progression instead of steadily avoiding the drop zone once again.

Although Newcastle in their current state aren’t the same feared outfit of prior years, the foundations are in place for the Magpies to target on-field progression.

There can be no doubts that English football is better when the six-time FA Cup winners are competing for top-half positions, with the club boasting one of the division’s most passionate fan bases.

Newcastle is more than a football club, with legends like Alan Shearer elevating the team’s global status. Now, the Magpies are something of a brand, possessing supporters all over the world. It speaks volumes about Newcastle’s popularity that the outfit has an official supporter club in Asia.

The region welcomed the four-time Division One winners for the pre-season Asia Trophy tournament in 2019. Because of the Magpies’ profile in Asia, supporters can now bet on club-related markets at the top-rated football betting websites from Asiabet.org.

Is Bruce the Man to Lead Newcastle Forward?

Questions over Bruce’s future will continue to divide Newcastle supporters, even during the off-season. While he doesn’t bring the most glamorous style of play to St. James’ Park, the Magpies are showing steady signs of improvement.

The 60-year-old is by no means unsackable, but he’s earned the right to lead Newcastle in 2021-22. His job, however, will become even trickier if the club can’t bring back free-scoring Willock for at least another year.