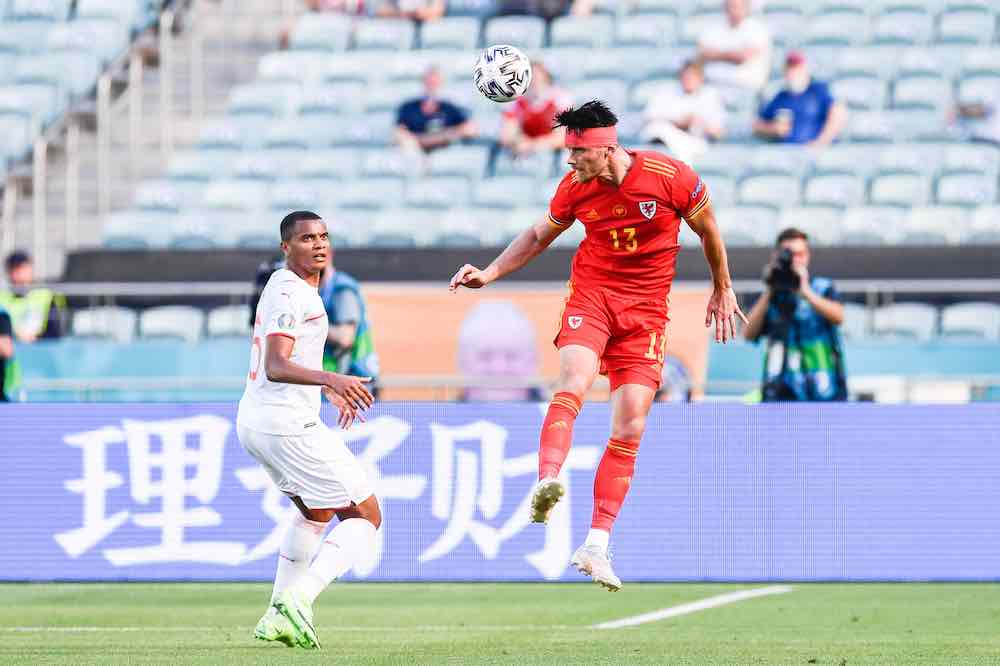 A bandaged Kieffer Moore secured a point for Wales against Switzerland in Baku with a brilliant header to keep Welsh hopes of getting out of Group A well and truly alive.

Wales started the match brightly with Moore having an early header tipped over the bar by Yann Sommer in the Swiss goal.

Moore then clashed heads with a Swiss defender Kevin Mbabu from the resulting corner which saw the Wales striker play the rest of the match with a bandaged head.

The Swiss controlled possession and in truth were unlucky not to grab all three points. Mario Gavranovic saw his effort ruled out for offside after a short VAR check while Danny Ward was forced into a save from Breel Embolo as the game drew to a close.

Embolo gave the Swiss the lead after 50 minutes when he powered in a header from six yards from a Xherdan Shaqiri corner.

Wales struggled to get the likes of Joe Allen, Aaron Ramsey and Gareth Bale on the ball, often looking for Moore on his own up front.

With 16 minutes left on the clock, Moore beat his man at the front post to head in Joe Morrell’s cross after a well-worked corner routine. The Welsh players wheeled away in celebration and managed to hold on in the last 15 minutes despite some heavy pressure from the Swiss.

Despite having fewer chances and not seeing a lot of the ball, the Welsh defence kept the Swiss crosses and corners at bay with Ward pulling off several saves towards the end — keeping his side in the game and helping to secure a vital point.

Bale was fairly quiet, leaving Moore to take all the plaudits while Ramsey struggled to create too much with the ball often flying over his head as Wales cleared their lines.

“Obviously a hard game and both teams tried to play,” Bale told the BBC. “It’s not a bad result, a 1-1 draw we will take the positives and on to the next.

“It was a tight tense game. You go one-nil down and you can crumble, we showed our class to fight and get the goal back.

“We worked hard, it was difficult in this heat, and we showed a lot of fight, determination and character to come back from one-nil down and I am proud of the boys.

“We have to use this as a springboard now to the next game and we’ll have to recover and on to the next.”

Around 500 Wales fans made the trip to Azerbaijan to support the team and will not be disappointed after seeing their side come back from a goal down. The attention will now turn to Turkey who they face in the same stadium on Wednesday evening.

Turkey’s defeat to Italy in Rome on Friday night means both Switzerland and Wales will feel confident they can qualify from the group, especially with three of the best-placed third-place teams progressing to the second round.

Wales manager Robert Page will need to tweak his tactics though if he expects to get Wales’ best players more involved with the play.