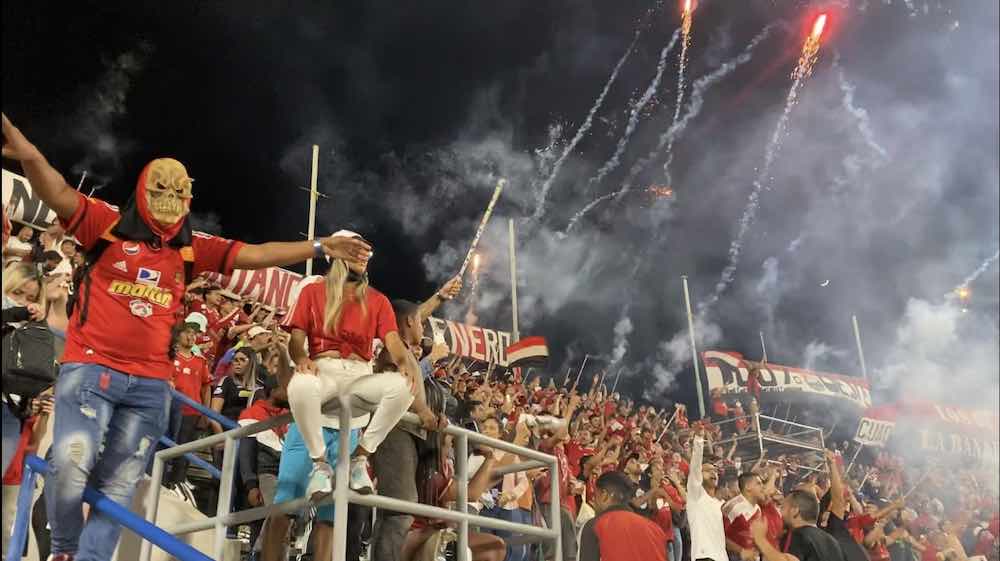 When Caracas FC’s Rosmel Villanueva headed in a 90th-minute equaliser against arch-rivals Deportivo Tachira in December 2019, not only was he scoring the goal to win his club the Clausura title, but he was scoring the final Clasico goal in front of fans for exactly 700 days.

Less than three months later, the COVID-19 pandemic plunged the world into lockdown and forced football, when it finally returned, behind closed doors. In a country already financially paralysed by hyperinflation and US restrictions, it bled almost dry what little revenue Venezuelan football clubs generated.

Last month, the Venezuelan government finally allowed fans to return to league football after experimenting with attendance at national team games in September and October. Fans did not have to wait long for the nation’s biggest fixture: El Clásico Moderno, Caracas FC versus Deportivo Táchira, the capital against the countryside, and the most successful club taking on the best supported.

On the pitch, the encounter pitted the two highest-performing sides of the season so far against one another; off the pitch, it was guaranteed to be a one-sided affair. Deportivo Táchira is based in San Cristobál, less than 50km from the border with Colombia and over 800km from Caracas FC’s Estadio Olimpico. But that wasn’t the sole reason the Aurinegro fans could expect to be outnumbered. 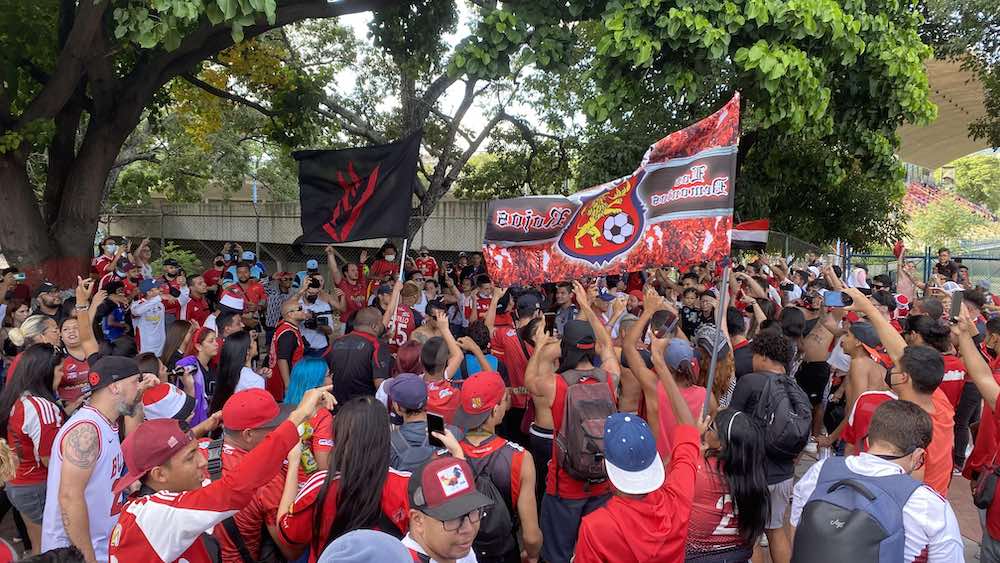 For their last attended fixture — that fateful night in Caracas history in December 2019 — the most hardcore fans of the capital city club intended to be there but were stopped at the Tachira border on the command of the Director General of Citizen’s Security.

The home fans had stormed the away end and the safety of the travelling spectators could not be assured. The act was not forgotten.

Despite Caracas FC not denying Deportivo Tachira fans the right of admission for yesterday’s game, there had been rumblings and rumours that in one way or another they would not be able to enter.

The speculation started to solidify into fact when reports on social media stated that the 150 or so Tachirense had been stopped by authorities in Valencia, 170km away, just shy of three hours before kick-off.

“They are asking for our ID cards to run traces on them,” a Deportivo Tachira fan told FUTVE English. “For the last hour, they haven’t returned them to us because according to [the authorities], ‘the system is not working’”.

The Tachira fan who spoke with FUTVE English did not believe the excuses given, stating that three of the travelling entourage had been taken to the local police station soon after presenting their ID cards, which suggested the system was in fact working.

With half an hour until kick-off, Caracas FC barra Los Demonios Rojos emerged in Olimpico’s away stand, beating their drums and singing their songs. The message from them was clear. 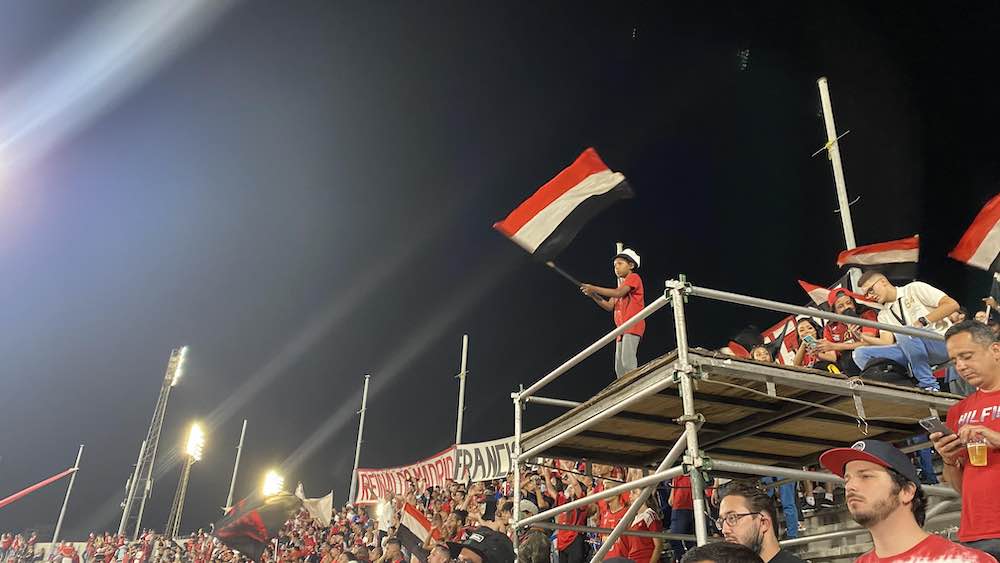 As the players made their way out onto the pitch for the national anthem, the barra ceremoniously paraded to their home in the south stand just in time to belt out their favourite line, drowning out the soloist: follow the example given by Caracas.

It was easy to miss Alexis Herrera’s whistle to start the game. The sound from the Sur was deafening. Few Caracas fans were looking toward the pitch at that moment anyway. This was their moment. They were back in the stadium they love with the team they adore.

It wasn’t their first game back at El Olimpico — that was last Sunday — but it was the most important. Eyes were locked with one another as chants were bellowed and drums were beaten to near rupture. It was sheer revelry.

A goalless first half was given no analysis amongst the fans during the break. There were logistical issues to contend with.

The same barra members who had been at the stadium since 8am — who had climbed 10-metre-high beams to tie up trapos, and who had ensured the impressiveness of the spectacle — had one more trick up their sleeve. 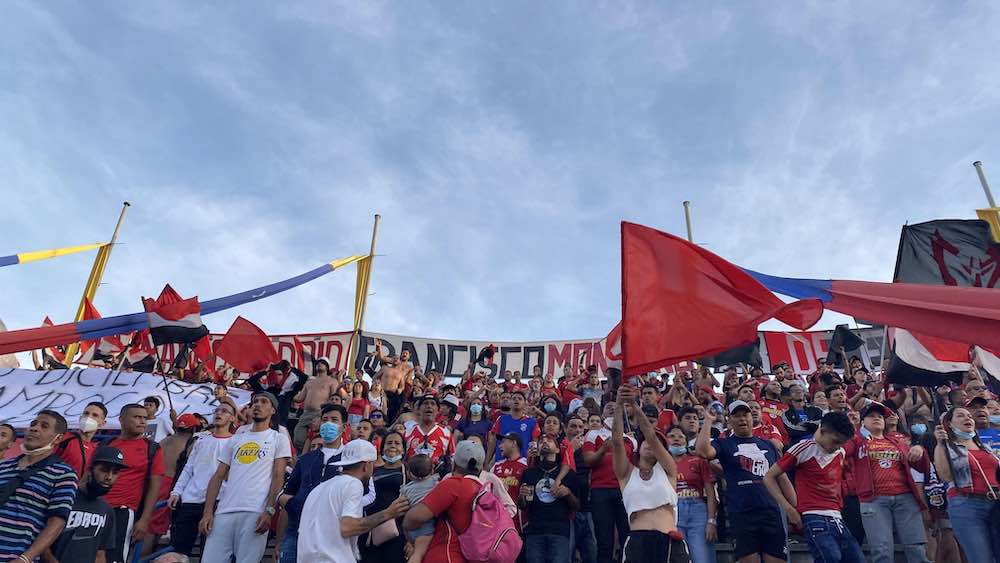 In the 75th minute, with the game still a stalemate but the fans ramping up their volume, the pyrotechnics began.

The stand was engulfed in smoke and the sky above it became illuminated with streams of crackling colour.
As the display entered its final frenetic throes, the Caraqueños were rewarded for their day’s labour.

Right-back Eduardo Fereira found himself the furthest man forward to slot a through ball past Christopher Varela and give Caracas an 81st-minute lead.

What was already a carnival in the stands became an unparalleled outpouring of joy.

There were fans who could not stand and had tears in their eyes. There were children likely at their first Clasico stood high on raised platforms marvelling at the collective ecstasy. There were even four Brits intoxicated by the occasion, jumping around as if their own club had just scored a late winner in their own derbies.

With two minutes left, victory was secured from the penalty spot. Richard Celis, their top scorer and assister, found the back of the net from 12 yards ensuring the party would rumble on into the night.

After 23 months, Venezuela had its Clasico attended again. It did not disappoint.