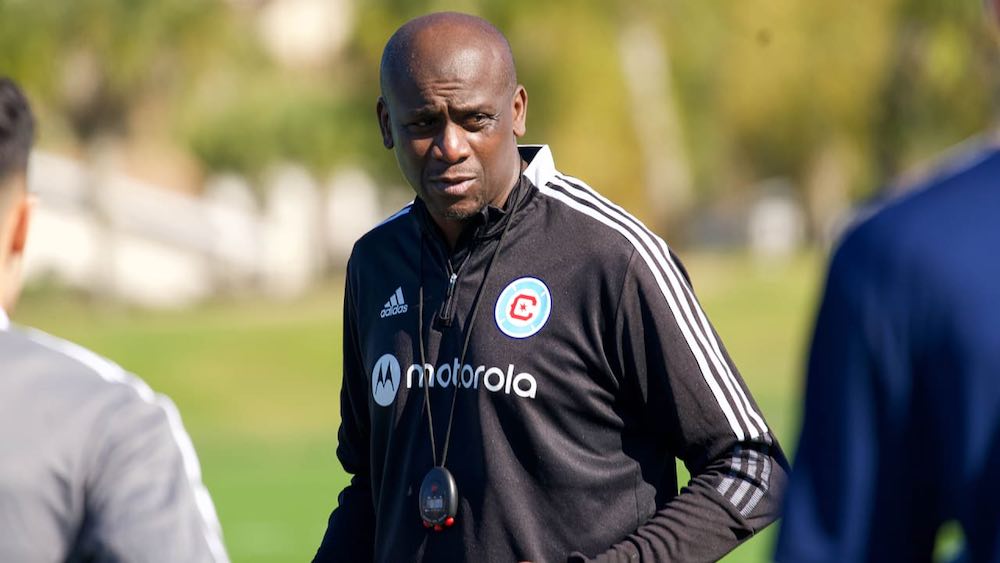 The 2022 Major League Soccer season is almost upon us.

Across the US and Canada pre-season preparations are well underway with clubs finalising rosters, announcing exciting new signings, and putting in the hard yards on the training pitch ahead of the opening round in just a few short weeks.

For Chicago Fire, this has meant swapping an icy Illinois for the warmer climes of Florida, where the new-look side have been put through their paces for the first time by incoming head coach Ezra Hendrickson.

After waiting more than two months to get started, the rookie manager has relished the opportunity to get out on the park with his new wards; watching, teaching, tweaking as he looks to stamp his own philosophy and identity onto the Fire.

This goes far deeper than introducing a new playing style. Hendrickson is set on implementing a complete change in mentality.

“One of the things that we stress with this team is that unity and camaraderie, and that off the field togetherness is something that plays a big part once you step on the field,” he said this week.

“Because if you’re my teammate and I can’t trust you off-field and I have no sort of relationship with you off the field, it becomes difficult to just manufacture that once we step on the pitch.

“So just watching the guys get along with each other and just seeing that bit of unity amongst the team has been very, very revealing to us as a staff.”

While Hendrickson may be new to management, the former defender has been involved at the pinnacle of American soccer for more than two decades as a player and coach.

During that time, he’s witnessed first-hand the importance that a strong team ethic can play in bringing success.

“I can say I’ve been on teams where we had a lot of very talented, quality players but we just never got the job done because off the field we just weren’t a team,” he said.

“So then when it came to playing, it was like 11 individuals out there. Whereas, I’ve been on teams with less talented players that have gone on to win trophies and stuff.

“So having that unity and having that togetherness is a big part of what we stress here, and we’ve seen a lot of that from the players, and I think that has helped us in the first couple games.”

Speaking to Hendrickson, it’s abundantly clear how important a role teamwork plays in his vision for the Fire.

Every single person has their part to play and each and every one is a vital cog in the Chicago Fire machine.

“I think for the teams that I’ve played on and I’ve been a part of the coaching staff, it goes beyond just 11 players that start,” he adds.

“So what we are trying to do is make sure that we’re, you know, 14, 15 guys deep, that if we have to replace a guy or if we have three in 8, so we play Saturday, Wednesday, Saturday, that we have guys who are capable of coming in in that mid-week game and it’s not a big drop-off. So that’s something that we’re trying to do.”

The challenge now is increasing that depth. Several players departed at the end of last season and with just two additions, Kacper Przybyłko and Rafael Czichos arriving so far, the squad remains a little lean.

But the coach insists they are focused on bringing in quality — players with the experience, leadership and technical skills to take the Fire to the next level.

“It’s not that the players we have in right now couldn’t start for us, but it’s good to have players that, you know, that lift the bar, so to speak,” he says. “I don’t know if that’s the correct way to say that.

“But players with that special quality — that you see some of these teams around the league have — that within a second could change the outcome of a game.

“Those are the type of players that we’re trying to bring in right now. However, the players that are in camp right now, they are going to have to play games because we can’t run out the same 10, 11 guys every game.

“So what I’ve noticed is teams that have won [have] been able to have a deep bench, so to speak — you know, at least four, five, sometimes six guys who when they do step on the field, the drop-off is not massive. So that continuity is still there with the team and the way we play.”

The team will return briefly to Chicago before heading on to Austin, TX for the second leg of their pre-season campaign.