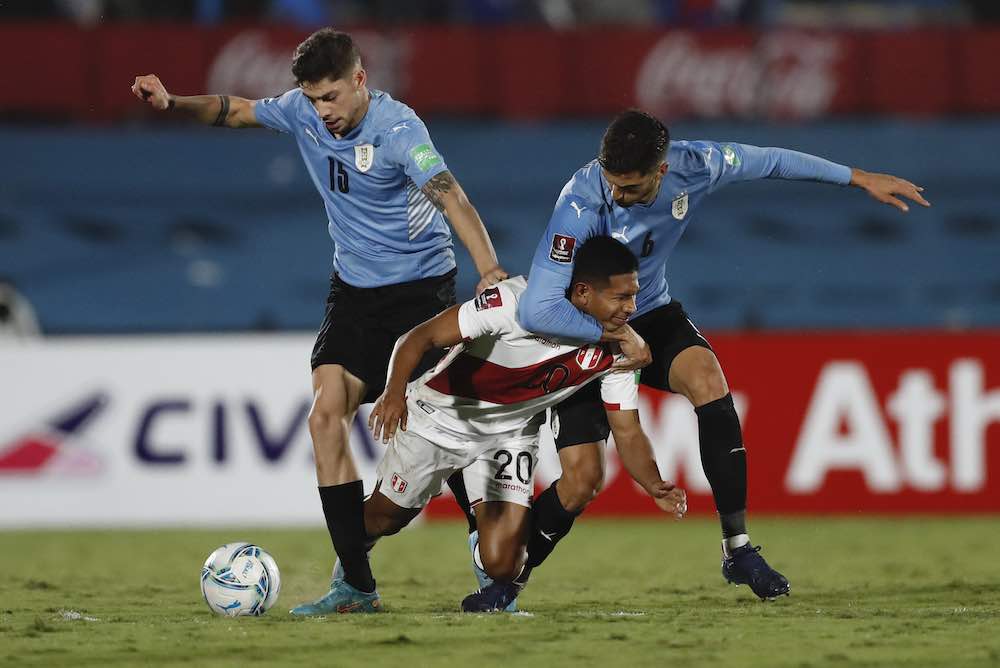 With one game left to play, South America’s four guaranteed qualification spots for Qatar 2022 have been decided, with an intercontinental playoff qualifying spot still up for grabs.

Brazil and Argentina qualified undefeated while Ecuador and Uruguay confirmed their places on Thursday night.

Despite a 3-1 defeat in the pouring rain in Asuncion to Paraguay, Ecuador’s automatic qualification was confirmed with the result in the Uruguay v Peru match.

Mistakes were plentiful as the weather took its toll, slips and misplaced passes were in abundance and a woefully overhit backpass from Piero Hincapié gifted Paraguay their second.

Paraguay’s Blas Riveros was sent off for a late lunge and will miss the final game, while Cerro Porteño striker Robert Morales, who scored the first goal, went off on a stretcher and will also miss the game.

Miguel Almirón, Gustavo Gomez and Mathías Villasanti also picked up yellow cards which lead to suspension for the game in Lima.

One player that does return for Peru 🇵🇪 is Junior Alonso.

In Montevideo, Peru created early chances and Gianluca Lapadula twice came close to opening the scoring inside the first fifteen minutes, though was thwarted by Uruguay goalkeeper Sergio Rochet on both occasions.

Uruguay began to show their quality, though clear-cut chances were few and far between. As the first half came to a close, Uruguay broke the deadlock through Giorgian de Arrascaeta.

Darwin Nuñez pulled wide to the left of the penalty area to drill a cross which Luis Suarez met at the back post only to crash his shot off the bar. De Arrascaeta was quickest to react and gave Uruguay the lead going into halftime.

The second half was another tight affair. Federico Valverde of Real Madrid left Pedro Gallese throwing himself across goal to try and block a 40-yard thunderbolt of a shot which came rebounding back off of the bar. Despite this effort, there were once again few big chances for the hosts as Peru defended well throughout.

As stoppage time ticked by Peru left-back Miguel Trauco looked to deliver a cross form deep which was overhit but almost caught out Rochet in goal. It began to dip under the bar with Rochet catching, it but his momentum took him into the goal. His arms were outstretched, trying to keep it on the right side of the line, but there could have only been millimetres in it.

The Peruvian staff and substitutes leapt from the bench, the players surrounded the referee who decided not to check VAR and waved play on. A cruel moment for the Peruvians who were sure the ball was over the line. To not even check seems like a questionable decision from a referee who could not have been 100% sure of his decision in that instance.

The win kept Uruguay in fourth ensuring their automatic qualification for Qatar 2022.

Peru now host Paraguay in Lima in a must-win game if they are to finish fifth, with two sides below them keen to pounce on any mistakes or dropped points.

Colombia have moved to within a point of Peru after a convincing win at home to Bolivia. Their 3-0 win also ended a barren run of form which had seen them fail to score a single goal in their last eight World Cup Qualifying games.

Goals from Luis Díaz, Miguel Borja and Mateus Uribe secured a comfortable win over Bolivia who often struggle in their games away from La Paz.

Chile could have taken fifth place with a win but faced the most difficult of games, away to Brazil, in which they came out on the wrong side of a 4-0 result.

Brazil continued their unbeaten campaign and impressive home form with a dominant win over Chile who conceded two penalties, converted by Neymar Jr and Philippe Countinho. Vinicius Jr scored the second in between the two penalties, while Richarlison finished the scoring in the 91st minute.

With the final games on Tuesday, there are three teams vying for the playoff spot. The winner will go on to face Australia for the chance to reach Qatar 2022.

Peru has the points advantage and know a win will confirm their place. Colombia goes to Venezuela and Chile face Uruguay, all three playing sides with nothing left to play for. With the twist and turns that are so common in COMNEBOL qualifying, all three will still feel they are in with a chance and the pressure will be mounting on Peru to produce in front of their home fans.