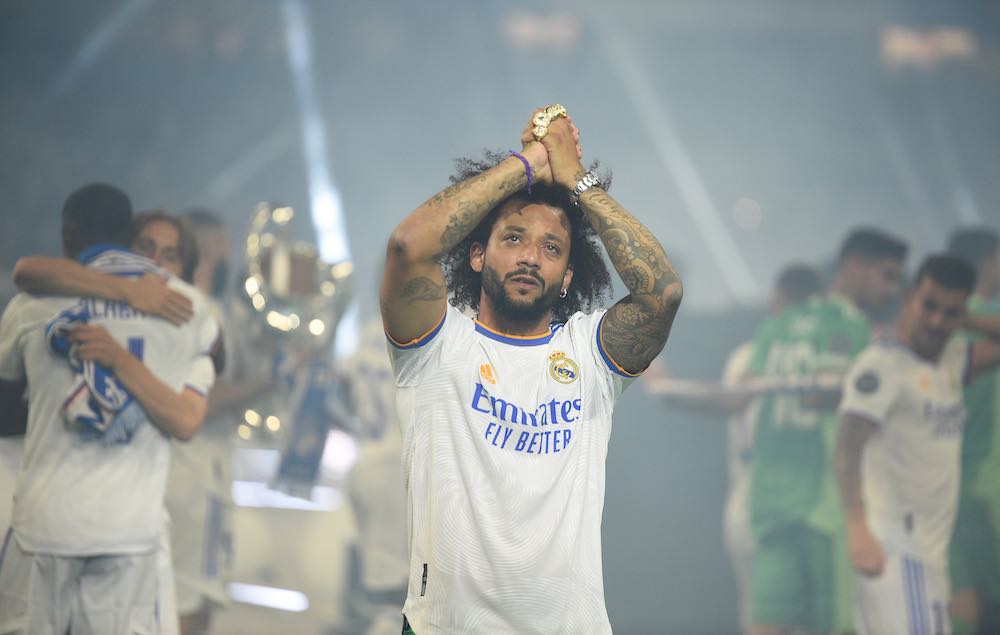 As another football season comes to an end, Real Madrid — the club and the fans — find themselves saying goodbye to another captain and club legend.

After the team won their 14th European Cup, against Liverpool in Paris, Marcelo expressed that this was his last game with Los Blancos.

Marcelo: “The emotion is brutal, it was my last game with Real Madrid.”#UCLfinal pic.twitter.com/CoWdE5g9Mf

Marcelo leaves a legacy behind like no other: one of the best left-backs of all time, and the best to grace the field of Santiago Bernabeu. With a tally of 25 trophies, Marcelo departs as the most decorated player in the club’s history.

“He is an important signing for us,” said former club president Ramon Calderon when the then 19-year-old signed in 2007. “He is a young player who will inject some freshness into the side and is part of our plan to bring younger players into the squad. We’re very happy because he’s a pearl that half of Europe wanted.”

Calderon’s words hold true 15 years later as Marcelo leaves as the most decorated player in the history of the club.

Marcelo’s great sense of creativity, touch, flair, grace and control will be missed. Equally missed will be the strong dressing room presence, leadership, and passion that made Madridistas from all over the world love him.

“It is a wonderful moment in my life,” Marcelo said after the Champions League final. I close a cycle here, at the best club in the world.

“Today is not a day of sadness, but a day of joy because we have once again won the best championship in the world. I am very proud of myself and so is my family. We have lived many magical nights together.”

Marcelo should be proud as he leaves the Club as an icon and legend loved by many, current Real boss Carlo Ancelotti described Marcelo as “a legend and my friend” in a Twitter post.

Though the Brazilian’s time as a player with Los Blancos comes to an end, he said he hopes to be involved at the club in the future, once he retires from playing.

“I tell you one thing, the future of Madrid is very good with the young players. Hala Madrid!”