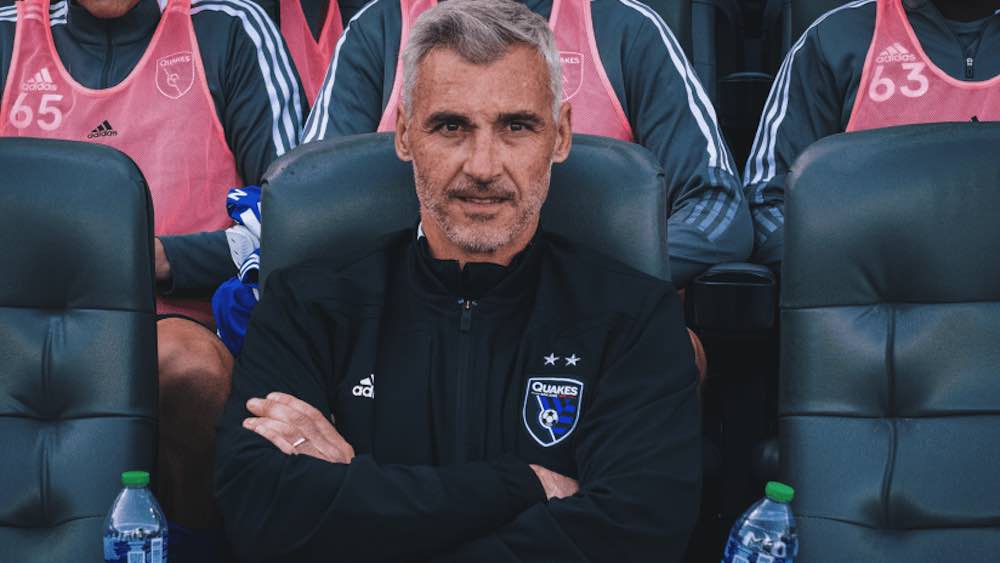 When Matias Almeyda was relieved of his role as head coach of the San Jose Earthquakes on April 18, it felt like a long-awaited end to an ever-intriguing drama.

Almeyda’s tactics entertained and frustrated fans and neutrals alike. There is no way you can say his time in San Jose didn’t draw attention, but as it came to an end it felt like a sideshow in the club’s history was over.

His tactics and philosophy were different to the manager he replaced, and his style of play will no longer be adopted by the Earthquakes going forward. It just wasn’t successful in San Jose and Almeyda is now trying his luck in Greece with AEK Athens.

San Jose General Manager Chris Leitch has not been in his role long himself. He took over as GM on a permanent basis in November 2021 after having been part of the side in a number of roles from player to head coach over the past 13 years.

He and his colleagues at San Jose have not rushed to replace Almeyda either and are letting the dust settle and plan appropriately following his departure.

Alex Covelo has taken over in an interim basis having been promoted from the San Jose second team and in his first game guided them to a dramatic comeback against the Seattle Sounders.

It’s done. Matias Almeyda out and Alex Covelo in.

Presser with Chris Leitch later today, where we hope to get some more insight on the go-forward plan. #Quakes74 pic.twitter.com/gngwoOio8C

After going two goals down, San Jose recovered to win 4-3 and get their first win of the season, a dramatic and exciting way for the interim head coach to start his tenure.

San Jose have, though, brought in a new technical director. John Wolyniec started in May 2022 after having been Red Bull New York II head coach from 2015-2021.

The plan, it seems, is to not make the same mistakes they made with the hiring of Almeyda. In that hiring they were looking at a big-name coach who could bring a philosophy and reputation that would elevate the level of the first team without the big investment other sides in Major League Soccer have. The mistake I mentioned, is that the first team then became detached from the academy and the philosophies the club had previously played by.

Now, San Jose are looking to imprint a clear and fixed philosophy and direction for its first team which can be seen throughout its academy as well.

Lietch has been credited with a lot of the good work which has happened in the academy. He looked to change the emphasis at that level from winning to player development, not reliant on the final score of a game as a measure, but the number of players they could get ready to move into the first team.

Since he has been part of the academy’s planning and development, there have been quality players being developed, like Cade Cowell, who have made distinct impressions at first-team level.

Academy players like Emi Ochoa and Cruz Mediana have been drawing interest from clubs abroad even before making the step into the first team.

This philosophy and system need to be integrated before finding the right head coach who fits their short and long-term visions as a club.

To ensure the search is not rushed, Covelo is doing a great job with a side who are adapting well to the change in system and have been putting in impressive performances which have seen them win three, draw two and lose once in MLS, as well as knock Seattle Sounders out of the Open Cup following a dramatic penalty shoot-out.

Their cup run came to a close against USL Championship side Sacramento Republic in the round of 16 in which a heavily rotated squad was used.

They have a strong attacking roster and the move away from the frantic man-marking system appears to be getting the best out of them.

Cristian Espinoza has always been one of their most creative players, though at times in his career with San Jose has fallen just short of what you’d expect from a designated player of his ilk.

He responded to the head coach change with a hattrick against Seattle, while Jeremy Ebobisse has seven goals in MLS this season and is showing form which should at least draw attention from Gregg Berhalter.

Powered by a brace from Jamiro Monteiro – the first of his MLS career – the @SJEarthquakes defeated Portland 3-2 at PayPal Park tonight.

The Earthquakes have scored three or more goals in five matches in 2022, the most by a single team in @MLS this season. pic.twitter.com/FX1RuW68lq

San Jose even became the first side this season to score at least three goals in five separate games, three of which have come since Covelo has taken charge.

Jackson Yueill now has teammates around him in the midfield and the extra support has seen him moving with a bit more confidence into the attacking third and he has three goals this season, two in the last two games.

Defensively, there are things to work on, though this is still early stages in a new era for the Earthquakes.

Their roster, on paper, is one that should put in a challenge for a playoff spot this season, though that may not be the defining goal for Leitch and his colleagues; a new direction with positive steps to next season is vital.