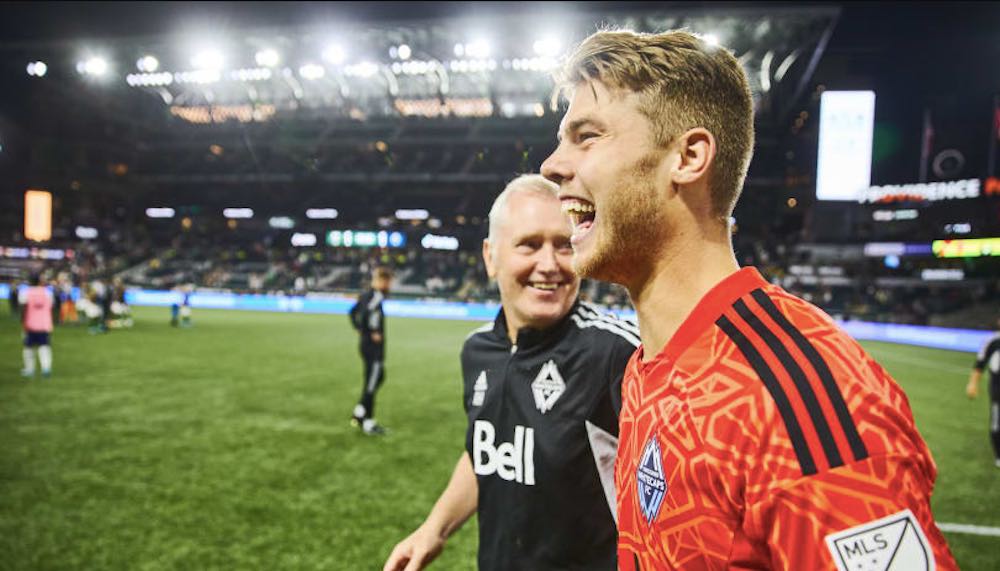 Isaac Boehmer was the star of the show when he made his first MLS start against Portland Timbers last week, adding his name to an increasingly long list of quality young goalkeepers in MLS.

The Vancouver Whitecaps could have moved up into a playoff place with a win over Portland if it weren’t for Tristan Blackmon giving away a soft penalty which was converted by Felipe Mora. Ben White had given the Canadian side the lead 32nd minute before Portland got back level in the 82nd.

After coming on at halftime for Cody Cropper in the previous game, Cincinnati, and not conceding, Boehmer got the start against Portland and made an immediate impact, only conceding from the penalty spot.

Against Portland his distribution was excellent, completing all his six long passes and three short passes according to WyScout.

Isaac Boehmer with a well deserved spot on the #MLS Team of The Week! #VWFC https://t.co/a8g0VeEjTA

Playing in MLS Next Pro for the Vancouver Whitecaps 2, he has conceded nine in seven this season with just one clean sheet.

Defensively, Vancouver have been a concern despite their good form, and these concerns were on show again in the recent 3-1 defeat to Chicago.

Even prior to that game they had given up the fourth most shots in MLS in 2022 (269 from 21 games; Toronto have conceded the most shots with 296). They also have the lowest success rate of defensive duels in MLS with just 55% from an average of 58.06 duels per 90 minutes.

This often means the goalkeeper has a busy time. The Whitecaps give up the most passes per defensive action in MLS with 17.05, second place is Nashville much lower with 13.48.

The opposition get a lot of time on the ball and Vancouver drop deep and look to frustrate opponents. This hasn’t worked too well too often and, in the West, only San Jose Earthquakes and Sporting Kansas City at the bottom of the Conference have conceded more.

Boehmer has the opportunity now to stake his claim for the starting spot as neither Cropper or Thomas Hasal, when fit, have really shown they are close to being top-level MLS starters.

Boehmer was quick off his line when required, dealt with crosses and corners well and managed his defence. He did not look overawed by the occasion and handled himself incredibly well.

In the 76th minute of his full debut he made an incredible reaction save as Claudio Bravo latched onto a loose ball in the box and volleyed at goal. Boehmer reacted quickly to tip the ball over the top for a corner. He showed impressive speed of movement and reaction which will excite fans for the future.

Boehmer kept his place against Chicago, and even with Cropper available again he gives head coach Vanni Sartini a lot to think about.