Why Is De Jong ‘Not Interested In Manchester United Move’? 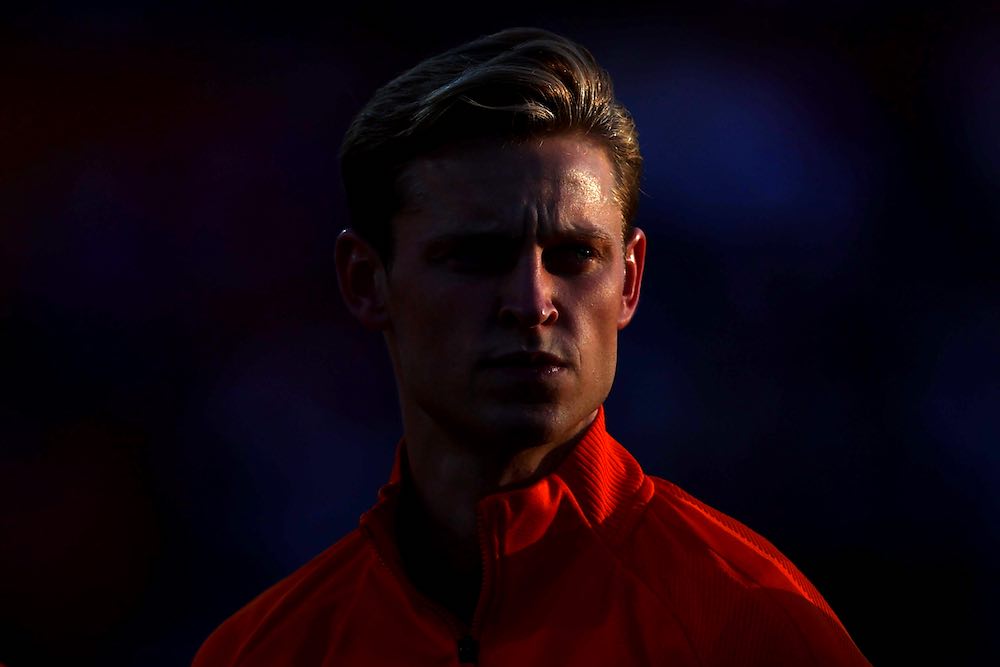 While other Premier League teams have been moving quickly in the transfer market, Manchester United has so far struggled to bring in any big signings.

Although fans were excited by the arrival of United’s first summer signing, Tyrell Malacia, questions have been raised about whether they are going to land their main target, Frenkie de Jong.

With the departures of Paul Pogba and Nemanja Matić, Erik ten Hag has identified the central midfield as the weak spot of the team. It is no secret that Ten Hag is a great admirer of De Jong and, with their history together at Ajax, a move would seem to suit both parties.

Not so long ago – the move seemed like a certainty to go through, and the bookmakers had slashed the odds on Manchester United getting their man.

Many of the best betting apps are offering odds on a number of transfers and potential transfers this summer, but it is turning out to be a transfer window full of twists and turns.

According to claims from the Spanish media – De Jong’s agents have told Barcelona that the player has no intention of leaving the club.

Despite these reports, United remains confident that they will sign him, having been assured that the Dutchman is open to the move should there be a resolution to his salary dispute with Barcelona.

It is well known that Barcelona has been encountering financial problems and this situation has only worsened during the Covid-19 pandemic. Due to the club’s loss in revenue, De Jong had agreed to defer payment of his wages and bonuses to the amount of £17m.

The dispute seems to centre around these payments and how they will be sent should the transfer go ahead. It has been reported that Barcelona wants to negotiate the debt as an add-on to the transfer fee, although United has not agreed to this.

Official. Frenkie de Jong is included in the squad of Barcelona’s pre-season tour in US. 🚨🛩🇳🇱 #FCB

Still no changes: no agreement on player side with Manchester United, no intention to leave as things stand. The clubs have agreed €75m fee plus €10m in add-ons. pic.twitter.com/1lnDwwDuVV

With the transfer saga being dragged out – De Jong reported back for training with Barcelona on Monday. The English club has been left to wait, with the player giving very little away.

Sources from within the club say that they are quietly confident that the deal will go ahead. They believe that the agreement of a transfer fee between the clubs is a sign that the player is willing to complete the move.

As has been widely reported, United has already agreed to an initial transfer fee with Barcelona for the value of €65m with add-ons of over €20m. According to some media outlets, De Jong was disappointed when Barcelona Manager Xavi revealed the agreement to him over the phone.

Despite their recent financial woes and lack of silverware, Barcelona finished second in La Liga this year, with an encouraging second half of the season.

With the club strengthening through the recent signing of Raphinha and the expectation that Lewadowski will join soon, it would be reasonable to assume they will be contending next season both domestically and in the Champions League.

While still being one of Europe’s biggest clubs, United’s performances have been underwhelming in recent years. Ten Hag has a lot of work to do, having adopted a team that only just scraped by to get a spot in the Europa League.

As discussed in this interview, Solskjaer’s four year reign was less than glorious and Manchester United is having to rebuild once more.

With the quality of Manchester City and Liverpool right now, it is unlikely that they’ll be back in contention any time soon. The truth is that the United project is hard to sell to prospective signings right now. The club is struggling to rediscover their identity as they undergo another rebuild.

If anything, the ongoing De Jong saga demonstrates their lack of appeal.

According to ex-Barcelona boss Ronald Koeman, De Jong has previously made clear to him that he is happy at Barcelona. The player has repeated this sentiment in recent interviews, while also appearing to be frustrated that the club are going against his will and forcing him out.

Having joined the Spanish club in summer 2019 for €75 million, De Jong undoubtedly feels the expectation of being a big signing for the club.

Though he has produced some great performances for Barcelona, De Jong is looking to establish himself in the history of the club. Leaving this summer simply does not fit with his ambitions.

The reality for United

Though they have the financial power to go after their main targets, United is currently struggling to attract hot prospects and star players. This is not surprising, as it has been almost a decade since they won the Premier League.

Though it is still early days, Ten Hag looks to be a move in the right direction for the club. However, realistically, United are a few years off of competing at the top level.

A delegation of senior United staff including CEO Richard Arnold and football director John Murtough travelled to Catalonia this week to try to get the deal over the line. Reports have claimed that they’ve returned empty-handed.

With Ten Hag making it clear that De Jong is his main target, United is continuing to try to make this happen, although sources from the club are claiming that they are also monitoring other options. It would seem that if this deal doesn’t happen soon, then they will concede defeat and walk away.