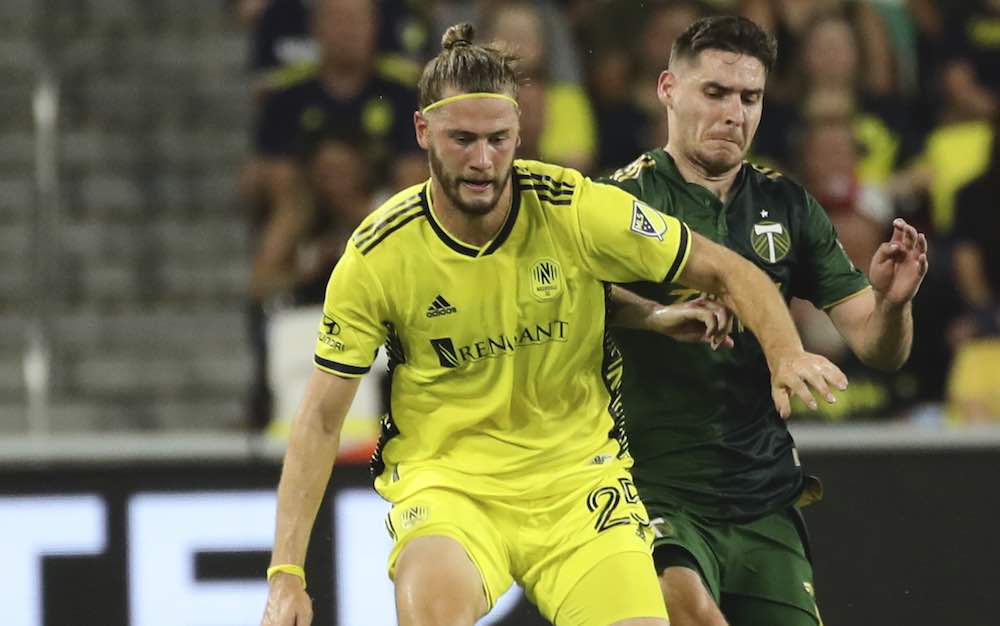 Three Major League Soccer sides have their playoff places confirmed going into the international break. LAFC are top the table and continue their challenge for the Supporters Shield Trophy while Austin FC and Dallas are also far enough ahead of the pack to be confirmed.

Austin have a nine-point cushion over Portland Timbers in fifth place to all but confirm a home game in round one of the playoffs, while Dallas are just four points clear so still have some work to do in that regard.

Why they will: Hany Mukhtar

The forward is in what seems a two-horse race with Sebastian Driussi for league MVP and has 11 goals in his last eight games.

Nashville are on a six-game unbeaten run (14 points) and only Philadelphia Union (16 points) have more points during that time. They are in a hot run of form in just the right time.

Why they won’t: If they lose Mukhtar

Unless something happens to Hany and he is unavailable it is near impossible to see them dropping out of the playoffs, let alone the top four.

Why they will: History, they hit form at the right time and have the squad depth to compete with anyone. They have only lost eight games all season, joint best with LAFC in the West, it has just been too many draws, their 13 is the highest in the West.

Why they won’t: Not seeing out games. Last time out took a stoppage-time equaliser from Santiago Moreno against Columbus Crew to rescue a point. Jaroslaw Niezgoda is their top scorer with nine but hasn’t registered a goal in his last nine appearances.

Verdict: Playoffs – they just need a point, and despite two tough games they have the quality to do it.

Why they will: Their attack has shown great adaptability and having a player like Emmanuel Reynoso gives them the chance to be a consistent threat. Their wide players have ensured more pace has been added to the attack while taking some of the burden off Reynoso’s shoulders to break teams down. Luis Amarilla, though not prolific, can trouble defences and add goals.

Why they won’t: They haven’t been the same team since losing Bakaye Dibassy to injury and have struggled without him at the centre of defence.

Verdict: Playoffs – a win over San Jose looks doable with the attack they have, as long as the defence holds out and tries to improve for the playoffs.

Why they will: With a game in hand, they can go three points clear with a win over San Jose on Saturday. They bounced back to form at home to Colorado last weekend and by scoring four times they give themselves a much-needed confidence boost going into their remaining games.

Why they won’t: Defence and inconsistent performances. The Galaxy were awful on their trip to Vancouver, struggling to get things going in possession while looking fragile in defence. By not knowing which LA Galaxy team is going to show up, there is still concern around this team.

Verdict: Playoffs – with three games left, bringing in at least four points should be enough to see them secure seventh spot.

Why they will: Their two remaining games are against playoff rivals, if they can win both they put themselves with a shot at the playoffs depending on other results around them.

Why they won’t: Goals. They have only scored 39 goals this season so far, only Vancouver have less. Coming up against playoff rivals they need to take two wins from two which requires more attacking threat than what they provide on a consistent basis.

Verdict: No Playoffs – it’s too late now and too many points dropped throughout the season.

Why they Will: There’s a lot of confidence at the moment with wins over rivals Seattle Sounders and LA Galaxy recently. This late playoff push has come as a bit of a surprise and having already qualified for CCL next year through their Canadian Championship win, they are playing with no pressure and a lot of freedom.

Why they won’t: Inconsistent. These recent wins have been fantastic but there is nothing about this side that makes you feel they are guaranteed to continue their form. The lack of depth behind the usual starters and poor defence suggests they will drop points.

Verdict: No Playoffs – they will give it a go I’m sure, but they should have a long break to regroup and prepare for their CCL campaign next season.

Why they will: With a game in hand, they have the chance to add nine points to their total and face two teams already eliminated from the playoffs.

Why they won’t: Left it too late. Defeat to Vancouver last week means that even if they can win their game in hand, they still will be below the playoff line and rely on others to drop points.

Verdict: No Playoffs. They are relying too much on other results to go their way now.

Why they will: Miracles happen…sometimes.

Why they won’t: There is far too much ground to make up while relying on almost every result to go their way.

Verdict: No Playoffs. Tough remaining fixtures and needed too much to go their way, it’s all but impossible.

Looking at the fixtures on paper it seems that LA Galaxy should be able to get over the line and the top seven would progress to the playoffs.

This would mean Seattle Sounders would miss out for the first time in their history as an MLS side. They would need three wins from three to have the strongest chance to progress, while relying on others to drop points.

It is MLS though, and with the pressure hanging over each side leading into the final games and decision day.

Two Major games which can affect the race to the playoffs:

Seattle’s game in hand really needs a win to ensure they stay close to the pack. They would go one point behind LA Galaxy should they get the three points, without it, they would look a long way back.

Should LA get the win, they would all but eliminate RSL while giving themselves a strong lead going into decision day over their rivals.

These two matches will be key in how the table will look going into decision day.

We will surely enjoy many twists and turns in the remaining few games to see who can cope with the pressure and come out on top.

Each team has much to play for and the Western Conference is providing an exciting end to the regular season.