Stuck At Chelsea: What Will It Mean For Christian Pulisic Ahead Of The World Cup? 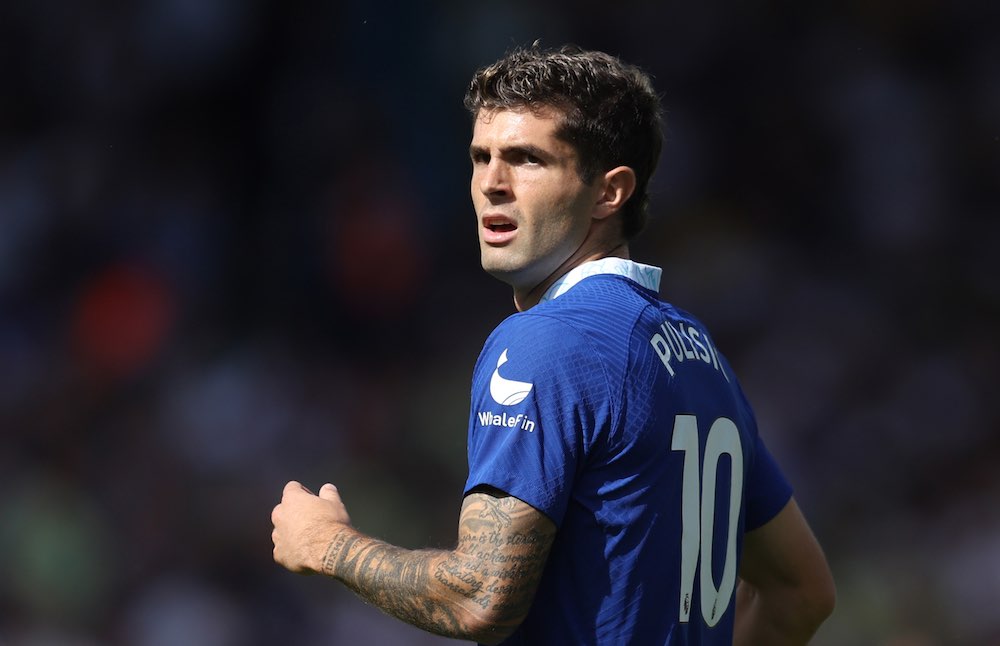 A number of questions have been raised surrounding the United States men’s team ahead of the World Cup, not least who should be the starting goalkeeper and who will be the centre forward? But the latest surrounds their captain, Christian Pulisic.

The attacking midfielder is struggling to find game time at his club, Chelsea, and has not been able to secure a move away during the summer transfer window in Europe.

Gregg Berhalter has given a number of good, young players opportunities within the qualifying rounds for the Qatar 2022 World Cup, and this has shown the progress the game has made in the country.

He favours a 4-3-3 formation and the two wide forwards are vital to the attacking style of play they use. The centre forward will drop and link play frequently, giving space for others to find shooting opportunities.

Pulisic has been the first name on the teamsheet for the USMNT and Berhalter has emphasised how important he is to the team, but he’ll lack match fitness and other players are in good form, so who could be the biggest attacking threats for the American team at the World Cup? 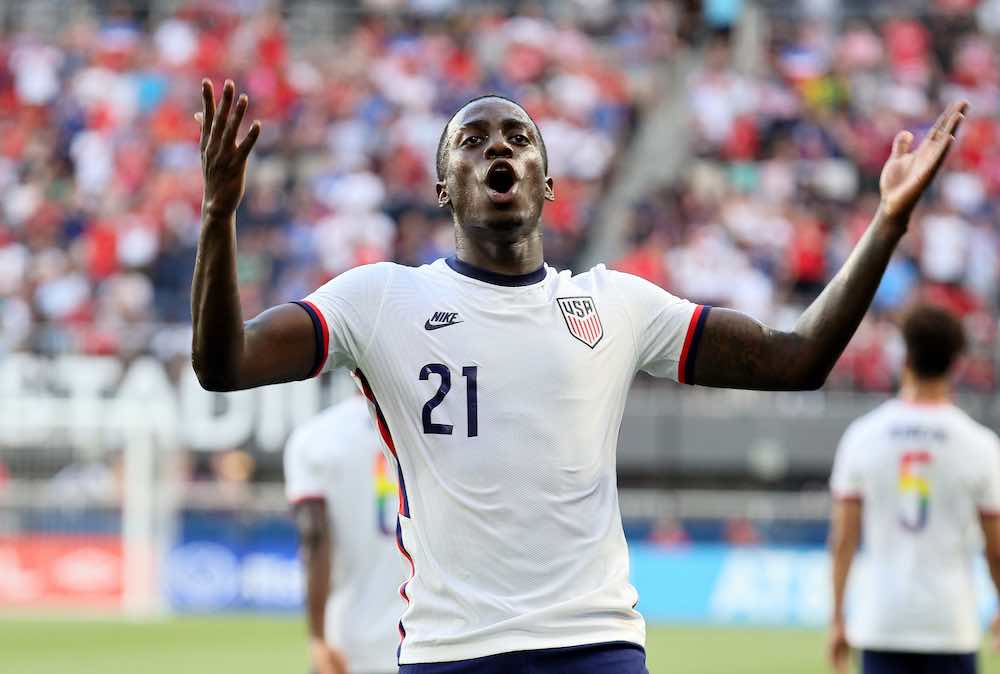 CINCINNATI, OHIO – JUNE 01: Tim Weah #21of the United States celebrates after scoring a first-half goal against Morocco at TQL Stadium on June 01, 2022, in Cincinnati, Ohio. (Photo by Andy Lyons/Getty Images)

Weah has been Berhalter’s preferred partner to Pulisic on the two flanks for the USMNT in recent games. The son of former Ballon d’Or winner George is in his fourth year playing for Lille in France, though is yet to make an appearance so far this season due to injury.

Alongside Pulisic, Weah provides more pace and willingness to run in behind the defence. He has a more natural wide forward/centre forward style than Pulisic who provides the ability to get hold of the ball and look to create.

Similarly to Pulisic, he has competition for game time at Lille. He had doubled his playing time at Lille last season in comparison to the 2020/21 season, going from 863 minutes in Ligue 1 over 28 games to 1618 minutes across 29 games (per Transfermarkt).

One issue for Weah has been that despite the increase in game time, he still scored only three goals in both seasons only adding five assists last season to the previous zero.

Being a different type of attacking midfielder/forward to Pulisic — a high-tempo attacking player who can stretch the pitch and give the USMNT a different dynamic — he has faith from Berhalter to contribute and make the team more versatile in their attacking play.

Weah has struggled with injuries and his involvement may need to be managed by Berhalter to keep him fresh and healthy. Knowing this, the need for Pulisic to be match fit is vital to the USMNT hopes.

There had been rumours of interest from Valencia in La Liga earlier in the transfer window. Linking up with Yunus Musa would have been interesting for USMNT fans to see, but Weah now has the challenge of forcing his way back into the Lille starting 11.

What an exciting addition Aaronson has become to Leeds United already this season. There has been an American revolution at the Yorkshire club led by Jesse Marsch and starring Aaronson and USMNT teammate Tyler Adams.

Marsch has been able to inject more organisation to complement the high press and attacking threat his side bring to the Premier League.

Aaronson has been key to this with his abundance of energy to hassle and press defenders while being a creative force. His goal against Chelsea highlighted his role in the side, closing down Edouard Mendy and stealing the ball before a cheeky no-look tap-in.

Aaronson is showing his ability to make the step up from the Austrian League with Red Bull Salzburg and blend in at his new side so quickly.

His movement and link-up play fit well with the system and he has performed well when called upon by Berhalter.

The former Philadelphia Union player has shown himself to be one of the top attacking midfielders for the USMNT. He has the ability to play in the place of Pulisic if called upon and he has also been used in a No. 10 role by Berhalter.

Aaronson will be a big part of the decision with regard to the attacking midfield lineup and his performances have shown him to be amongst the best in the USMNT camp.

Playing under Nico Estevez at FC Dallas ensures Arriola is well equipped for a role in the USMNT, with Estevez a former assistant to Berhalter. Estevez sets his side up in the same formation, as well as playing a very similar philosophy.

With his pace, he can be a big threat against slower defenders as well as coming on later in games when the opposition might be tired. He is not in a position to be taking Pulisic’s position from him, though is a useful changeup player when the game is becoming more stretched.

His link-up with Jesus Ferreira at FC Dallas is something that will help him, as Jesus looks like the favourite for the centre-forward role. Arriola has nine goals and five assists already this season and his side look to be in a good place to secure playoff football in MLS this season.

Seattle Sounders are having a historic season, possibly in more ways than one. Morris helped his side become the first from MLS to win the Concacaf Champions League earlier this year, while they now find themselves in a position where not qualifying for the playoffs for the first time in their history as an MLS side is a real possibility.

Injuries have affected the team which has also had a bit of a knock-on effect on Morris himself. While he has remained healthy, the team’s system and formation have had to change, meaning his role has as well.

Playing in a 4-2-3-1 as a winger, he has contributed on both flanks, while at times Brian Schmetzer has opted to use wingbacks and move Morris into a centre-forward position alongside Raúl Ruidíaz.

Morris has seven goals and three assists this season so far and will be looked to for more by his teammates going into the end of the regular season to secure a playoff place.

His speed and physicality are useful weapons, in a different way to Arriola, but similarly making him a good change of pace introduction.

It hasn’t been a happy start to the season for Pulisic at Chelsea. With players moving clubs this summer with the main goal of finding game time to secure their places in their respective national teams, Pulisic has been forced to remain in the English capital.

With the season just five games old Pulisic has six appearances but only one of them was a start, and in that game, he was subbed after 60 minutes.

Pulisic arrived at Chelsea in 2019 and his first two seasons were quite consistent in terms of minutes on the pitch, with 1,727 in 19/20 and 1,725 in 20/21 (Premier League). Last season there was a large drop off for Pulisic who lost almost 500 minutes of Premier League football, registering 1,285 minutes.

His decline in production, matched with the competition for places has been a reason Pulisic was searching for an exit this summer.

The arrival of Raheem Sterling has made breaking into the first team even more difficult for the American who is behind the English duo of Sterling and Mason Mount in the attacking midfield positions.

The silver lining, if there is one, of staying at Chelsea is that there will be other competitions and a busy schedule which will force rotation. With the domestic cups as well as the Champions League, Pulisic will be able to try and secure starts in these games even if he is struggling to find them in the Premier League.

The appointment of new head coach Graham Potter could also see Pulisic get another chance to push for a starting spot.

Being match fit come November is key for Pulisic, as well as for Gregg Berhalter who made the forward USMNT captain.

If he struggles to get game time, questions will be raised over his starting place in at least some of the World Cup games solely due to the quick turnaround of matches.

The two MLS-based players will likely continue to be used as substitutes or should the short breaks between games prove too much in the heat of Qatar, get a place in the starting 11 due to rotation for freshness.

That’s not to forget Cristian Roldán should he be available from injury and match fit to add depth to the USMNT squad in Qatar.

Pulisic is the captain and has shown leadership and ability on the pitch which will surely see him start when fit. But if Aaronson and Weah both have strong starts to the 22/23 season with their clubs, Berhalter will be given some tough decisions to make.

What it does highlight is the depth the USMNT now has across its forward line. There are fewer guaranteed starters, even those who have been signed for over $60 million, and each player brings a different skill set to the table.

As much as it’s great that there are different options, what needs to improve is more players forcing their way into the starting 11. Many of these mentioned are all good options, though few stand out over others rather than compare well.

Berhalter will look at the matchups (England, Wales and Iran) to identify who will be the most effective in each of these games. Qualification from the group stages is clearly a realistic goal which is another reason this depth across the pitch is vital to the USMNT success.

If he is fit, we will surely see Pulisic starting the first game against Wales on November 21st. His game time, as well as the form of others leading up to the tournament, will no doubt dictate what Berhalter does after this, especially with their second game against England just four days later.

USMNT fans will be hoping to see Pulisic force his way into matchday squads and onto the pitch, especially in cup competitions.

Should he continue to struggle for game time, he could enter this World Cup with a point to prove, which can only help Berhalter and give confidence to the United States.