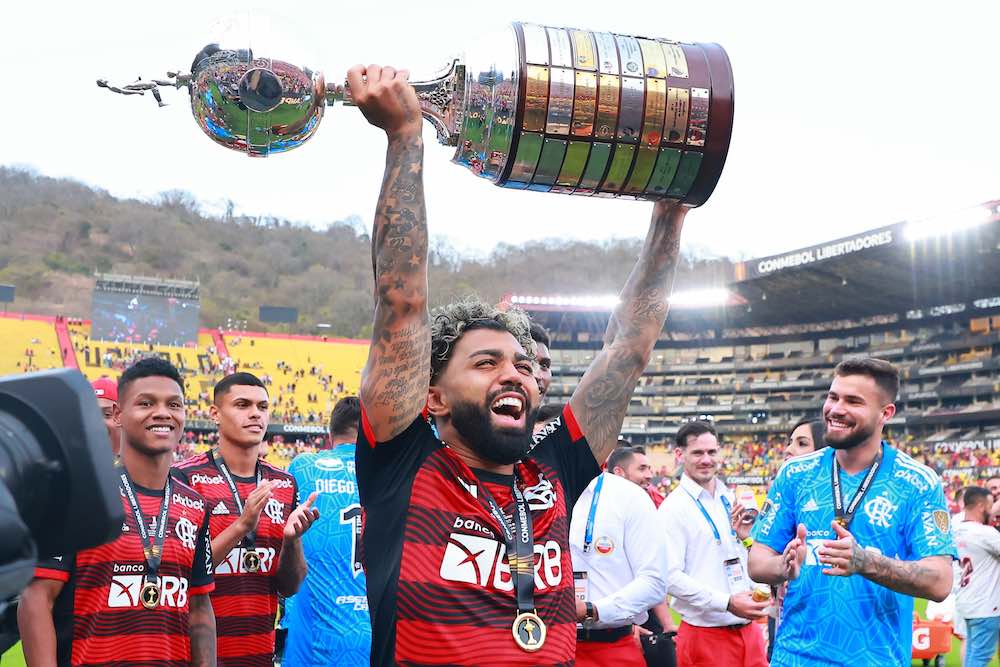 By Louis Smith at the Estadio Monumental, Guayaquil.

The eve of the game saw thousands of Flamengo and Athletico Paranaense fans flock to the city’s streets to create a carnival atmosphere along the riverfront.

Although the majority of people believe the finals should be in the old format (two-legged and played at each side’s home ground) there are some benefits to the one-legged final.

Natives of Guayaquil have embraced the showpiece event themselves putting on live DJs and offering the fans great hospitality.

“As an Ecuadorian native, being in the street and taking in the atmosphere was a great experience for me,” said Sebastian Torres.

Three hours before kickoff, several fans crowded the streets leading up to the Estadio Monumental Banco Pichincha making plenty of noise, calming their nerves and using beer to fuel up as they braced themselves for a date with destiny.

This was the scene in almost every corner of Guayaquil.

On route to the final. #Flamengo fans in fine voice. #Libertadores. pic.twitter.com/G2q6tdRa6Y

An hour and a half before kick-off, the atmosphere began to build with Flamengo and Athletico Paranaense fans as well as locals adding to the occasion.

It was the Rubro-Negro fans who were the loudest, however, singing about their heroes of 1981 who were crowned World Champions after defeating Liverpool.

On the referee’s whistle, there was a huge roar inside the Estadio Monumental as the time for talking had stopped and the action began.

Supringsley, it was the away side who started the better of the pair. When they had the ball they looked for quick attacking play to try and hit Flamengo on the counter-attack. A deep free-kick from inside the Athletico half saw David Luiz misjudge the ball, Vitinho was hot on his tail and forced a save from Hugo Santos before the ball was cleared for a throw-in.

The throw-in that followed saw Khelven hurl the ball missile-like into the Flamengo box, causing panic for the defence and the ball fell to the feet of midfielder, Alex Santana who fired his shot over the bar.

Flamengo were dealt a blow 20 minutes into the game when experienced left-back, Filipe Luis went off with an injury following an earlier collision with Vitor Roque.

Despite having a solid replacement in Ayrton Lucas, Fla fans would have been fearing the worst. In the 2021 final defeat to Palmeiras, Luis went off injured and Flamengo went on to lose the tie.

Then came the huge moment. With both Aryton and Henrique fighting for the ball, the whole stadium paused as if they knew what was about to unfold. The Flamengo man just beat Henrique to the ball, and in a moment of panic put in a rash tackle — something which could have easily been avoided. But a rush of blood got the better of him and left Argentine referee, Patricio Loustau, no option but to dish out a second yellow.

It didn’t take long for Flamengo to take advantage of Henrique’s mistake. Just moments later, after some wonderful work on the right-hand side, Everton Ribeiro played an exquisite pass for Gabriel Barbosa to fire home.

Of the Rubro-Negro’s eight goals in Libertadores finals, Gabi has four, with the other four coming from the legendary Zico.

This sent the Flamengo fans wild as Loustau called half-time.

A man down, it was going to take a monumental effort for Athletico to work their way back into the game. A wonderful ball from Giorgian de Arrascaeta saw Gabi in once more, but this time Bento Krepski made a terrific save to deny the Brazilian.

The match looked like it was going to pan out into a dull ending, but with 19 minutes left to play Thiago Maia was replaced by Chilean midfielder Arturo Vidal, which sparked the local Ecuadorians to chant “no vas al Mundial”, as well as boo and whistle every time he got a touch of the ball. This comes after Chile took Ecuador to court over the nationality of Bryan Castillo, attempting to get them removed from the World Cup.

This seemed to lead to an Athletico resurgence. A shot from David Terans saw Hugo Santos spill the ball, but Agustin Canobbio couldn’t capitalize on the error.

Terans was at it again, this time whipping in a free kick for Pablo who squandered the chance.

There would be one final chance for Athletico in their search for an equalizer. A free kick from Terans, which unfortunately for fans of the Curitiba club, wasn’t to be as Flamengo lifted their third Copa Libertadores title.

In 2019, it was Gabi who sent Flamengo fans wild in Lima and now, three years later, lightning strikes twice as Gabi sent Fla partying long into the Guayaquil night.