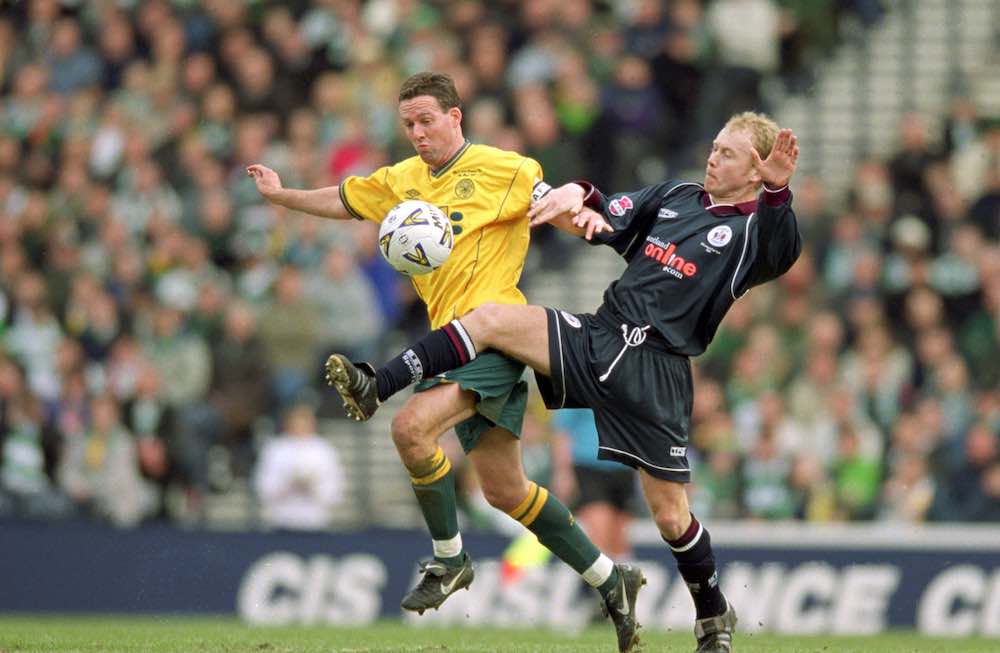 An interview with Alan Mahood, by Callum McFadden for WFi.

You started your career at Greenock Morton under Allan McGraw as a youngster. What was he like to work with as you were coming through?

“The gaffer always gave young boys a chance and got you in amongst the experienced professionals as early as he felt was appropriate.

“The main thing about him is that he was, and still is, a father figure.

“He is somebody that any of the boys that played in that team can go to about anything even today.

“He was great to work for when I was breaking through and when I returned to the club.”

You were highly regarded by clubs across the U.K., and it was the iconic Brian Clough who signed you for Nottingham Forest in 1991. Can you remember your first meeting with Cloughie?

“There was interest in me from Rangers in Scotland, and from a few clubs down south such as Chelsea and Liverpool, in addition to Forest.

“I was actually invited down to speak with Chelsea, but my gut feeling was that it didn’t quite feel right at the time. I also had a couple of days training with Liverpool but Forest were also in for me and I had a feeling that they would be the right move for me at the time.

“In terms of my first dealing with Brian Clough when I travelled to the City Ground for the first time, he was actually away filming a Shredded Wheat commercial. So, he was not around when I signed my contract.

“Then, when I did meet him he shook my hand and said, ‘So, you are the Scotsman that I have wasted all my money on?’

“That was not the usual welcome you would expect but that was Brian Clough.

“Unfortunately, as things transpired for me at Forest, it turned out that he was right in the end.”

How would you sum up your time at Forest as a whole?

“When I signed in March I was injured, and I never really had the opportunity to consistently train with the boys until pre-season which wasn’t ideal.

“However, I do not regret signing for them. They were a massive club at that time, and everyone knew Brian Clough across world football.

“I was a young boy when I joined Forest and it was my first time away from home and my family. I got a little homesick and niggling injuries while I was there did not help.”

You returned to Morton in 1992 and quickly established yourself as a regular in the first team. Was it a relief to be back playing regularly after a frustrating year in Nottingham?

“My fitness was not great when I came back so I worked hard on that and broke into the team on a regular basis.

“Unfortunately, I was injured again in the B&Q Cup Final of 1992, and I missed 14 months of football after that.

“Thankfully, I was able to work my way back to fitness after that and play a big part in the team in the coming years.”

You swapped Morton for your boyhood club Kilmarnock in 1998. You played alongside the likes of Ally McCoist and Ian Durrant at Killie during a successful period for the club. How special were those years?

#OnThisDay in 1998 Alan Mahood scored the only goal as @OfficialKillie defeated Zeljeznicar to progress to the 2nd Qualifying Round of the UEFA Cup!

“Playing for Kilmarnock really was the boyhood dream, not only for me but my family too.

“Then to play alongside that calibre of player amongst the other boys that were already there was great.

“I had joined the club the year after they had lifted the Scottish Cup in 1997 under Bobby Williamson who I also worked with at the club.

“The highlights of my time at Kilmarnock were playing in the top flight against many quality players, playing in Europe and reaching the Scottish League Cup final at Hampden in 2001, against Celtic.

“Playing in the final was a massive moment for me and it was unfortunate that Celtic had a player of Henrik Larsson’s class who was superb on the day as they won the cup.

“I played in my first and last League Cup Final on the same day in 2001, which goes to show you how brutal football can be. You just never know when you will get another opportunity to win a trophy and unfortunately, it was not to be for me or that group of players at Kilmarnock again after that.

“However, I had great memories from my time at Kilmarnock overall because as I said earlier, it was my boyhood dream, and it meant a lot to my family too.”

You finished your professional career at Morton for a third spell. How hard is it for a pro when you are coming to the end?

“Retirement from football is really hard.

“Your body isn’t shy in letting you know when time is running out.

“You try play as long as you can but that is not always possible or even the best thing for you.

“It was a sad day for me when I hung up my boots because I love football and you wish you could play on forever but that is not the reality for players at any level.

“It has to come to an end sometime.”

Finally, Alan, who are the best players that you played with and against in your career?

“I was lucky enough to play with many great players.

“At Morton, I was part of a midfield three alongside Derek McInnes and Janne Lindberg which was really enjoyable. They were both top players and I enjoyed playing alongside them.

“Then, I went to Kilmarnock, Ian Durrant signed at the same time as me and he was on a different level.

“I would have loved to have played with him at his peak because he was superb, and I remember thinking if that was him as his career was coming to an end then what would he have been like at his peak.

“I played against some great players at home and abroad, but I would have to single out Youri Djorkaeff as my toughest opponent as he had not long won the World Cup with France when I faced him.

“He was different class, and his quality was evident from the moment he touched the ball for the first time. A class act.”