Diego Maradona – How One Argentine Reinstilled Pride In Naples 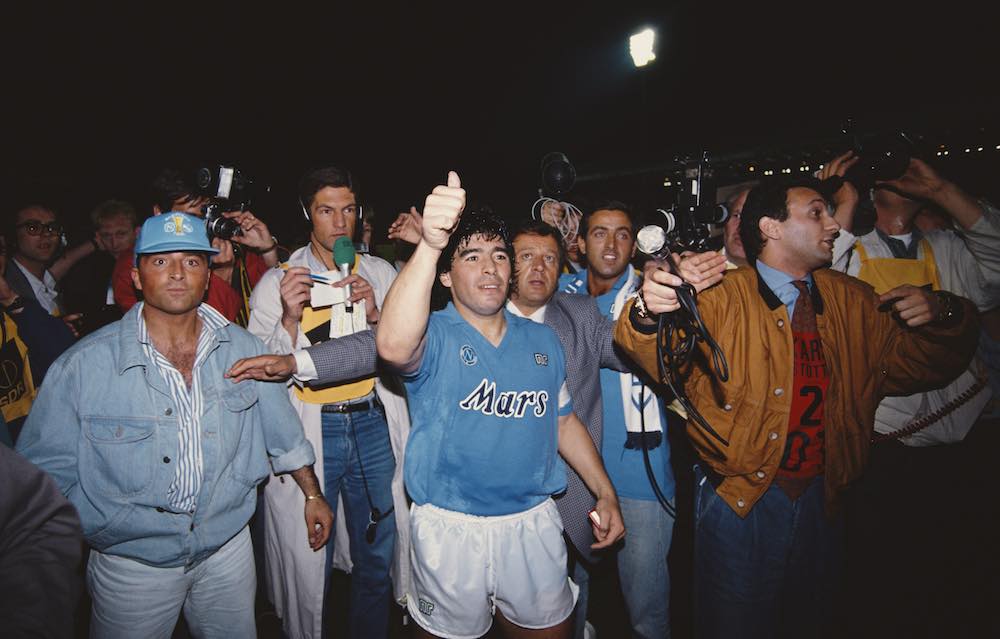 “We Neapolitans are like the South Americans of Europe: poor but proud. We try to take care of one another. It’s why Diego felt at home here. He was one of us and still is, even if he became a God in Naples.”

Diego Maradona, FIFA Player of the Century, was the most mesmerising, albeit unprofessional, of the footballing GOATs. He dazzled fans and bamboozled defences with his craftiness and grit.

Carrying ten Argentines on his short, squat back, he took his revenge on England for the Falklands War with his Hand of God on his way to victory in the 1986 World Cup. A messy exit from Barcelona was redeemed by a seven-year stint at Napoli in the 1980s where he reinvigorated the team and brought pride and success to the city.

Italy was long divided between the rich north and the poor south. Northern economic powerhouses like Turin, Rome and Milan boasted the best football teams with Juventus, Roma, Inter and AC Milan dominating Serie A.

A Neapolitan explained their rivalry with Juve: “It’s not only a rivalry between two football teams. It’s also a rivalry between the richer, business-driven, productive side of society and those of us from the south, who were always migrants or immigrants.” Before Maradona captained Napoli, no club from the south of the Italian Peninsula had ever won the league.

Maradona arrived in 1984 in poverty-ridden Naples, a city controlled by the mafia that was yet to recover from a destructive earthquake a few years earlier.

The little Argentine’s enthusiastic embrace of the local cocaine-infused, party lifestyle with the Camorra Capocrimine left fans needing little imagination to speculate on the source of his record-breaking transfer fee from Barcelona but as the local newspaper stated, they were not concerned.

Despite the lack of a “mayor, houses, schools, buses, employment and sanitation, none of this matters because we have Maradona”.

Argentina was a destination for hundreds of thousands of impoverished southern Italian men in the late 19th and early 20th centuries. Indeed, in Lunfardo, Italian/Argentine slang, spoken in Buenos Aires, tano (from Napolitano) is how the many people of Italian descent are still described today.

Maradona never forgot his roots growing up in poverty. He lived in a shack without running water and once fell into an open sewage pit. He said, “I want to be the idol of the poor kids of Naples because they are just like me as a youngster in Villa Fiorito”.

One Napoli fan, fortunate enough to know Diego personally, since his mother worked for him, said “when he saw us, we reminded him of his Argentine family. In fact, he called my mother his ‘mamma Napoletana.”

Maradona rapidly became a loved figure in Naples with his showmanship on and off the pitch, hauling the club to their first-ever Serie A title in 1986/87.

Sportswriter David Goldblatt wrote: “The celebrations were tumultuous. A rolling series of impromptu street parties and festivities broke out contagiously across the city in a round-the-clock carnival that ran for over a week. The Neapolitans held mock funerals for Juventus and Milan, burning their coffins, their death notices announcing ‘May 1987, the other Italy has been defeated. A new empire is born.”

However, it was always more than just football for the Neapolitans. “When I was young the city was only known for Camorra and crime. He gave us a new identity, and made the world see that Naples was worth something” said Napoli supporter Giuseppe Nappo following the death of Maradona in November 2020.

It had always been a city full of culture, character and spirit but the world never saw it as such until Maradona arrived. He brought joy to the city of Naples which had been blighted by natural disasters and crime and he helped to put it on a level playing field with the big cities of the north.

His legacy will forever be instilled in the Neapolitan culture. He is one of just three honorary citizens of Naples and the Napoli fans still chant his name passionately at every game; an ode for single-handedly restoring pride in their city.

During the 1990 World Cup, Maradona attempted to get the Neapolitans to support Argentina versus Italy in a semi-final match at Napoli’s stadium. It was a step too far for the Italian media with whom relations broke down in recriminations over his drug abuse, unsavoury connections and ill-discipline, resulting in his exit to Sevilla.

Although he didn’t transform the loyal Napoli fans into Argentines, with his golden touch and compassion for their city, Maradona became the favourite son of Naples, reinstilled with pride.