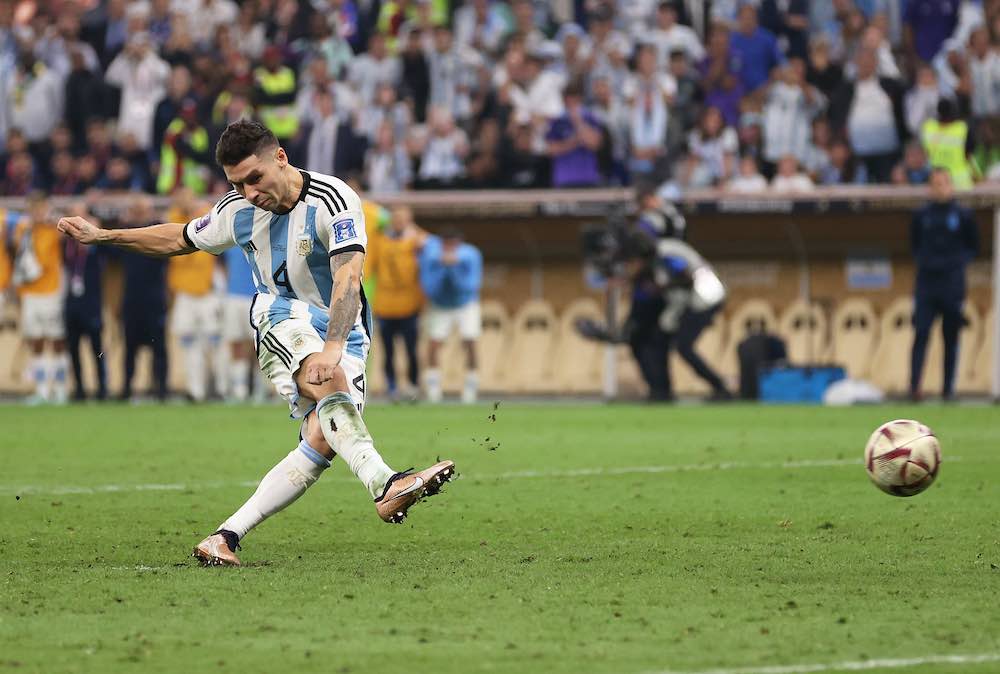 Argentina were one of the pre-tournament favourites for the 2022 World Cup. Even if they weren’t the favourites, with Lionel Messi in their team, and what was likely his last chance at World Cup glory, there was a sense of destiny about the whole thing.

The tournament panned out in dramatic fashion, culminating in one of the most eventful and entertaining finals in recent memory. Argentina’s performances throughout, and their ultimate victory, epitomised that drama.

by far the best video i’ve ever taken #messi pic.twitter.com/vJglh088Dr

Argentina came into their opening match with Saudi Arabia unbeaten in their 36 last matches and with the belief that they could end their 36-year wait for a World Cup title.

The first half saw them dominate proceedings and they led thanks to a penalty from Messi.

Lautaro Martínez had two goals ruled out for offside, and the only other negatives from the opening half were that it was only 1-0. The Saudis were slowly growing into the game with a high backline and a few decent spells of possession.

With nothing to fear, Saudi manager Herve Renard gave a team talk telling his players they were showing too much respect. Within eight minutes of the restart, goals from Al Hilal pair Saleh Al Shehri and Salem Al Dawsari gave Saudi Arabia a shock 2-1 lead.

After going a goal behind, Argentina looked slow and lacklustre, rarely threatening their opponents who managed to hang on for a historic win.

Next up for Argentina was Mexico, and they needed to bounce back in an electric atmosphere at the Lusail Stadium, they did just that, but it wasn’t all plain sailing.

A scrappy first half saw many Argentina fans anxious at the break. 64 minutes into the match, the little magician and Argentine hero Messi, as he has done on several occasions, fired Argentina into the lead with a piece of magic and there was no looking back for La Albiceleste.

An Enzo Fernandez strike in the game’s dying embers was enough to give Argentina an important three points, as they dusted off the cobwebs post-Saudi Arabia.

Going into their third and final group match against Poland, Argentina needed to win to top the group and they were given a glorious chance in the first half when VAR deemed that Messi had been fouled by Polish keeper Wojciech Szczęsny. In a moment of poetic justice for Szczęsny, he denied Messi from the spot, meaning the sides went in level at the break.

The second half would be much better for Argentina. Goals from Premier League-based duo, Alexis Mac Allister and Julián Álvarez, saw the South Americans pick up a 2-0 win. It meant they topped the group, setting up a tie with Australia in the round of 16.

Ousting The Aussies & Despatching The Dutch

35 minutes into the second half against Australia, some wonderful play by Argentina saw Mac Alister and Nicolas Otamendi link up before Messi, once again, fired Argentina into the lead with a delightful finish.

Some high pressing from the Argentine front line forced Australia goalkeeper Matt Ryan into an error, giving Alvarez a glorious chance to put his side 2-0 up, which he did with ease.

Lionel Scaloni’s men were given a late scare when Enzo Fernandez’s attempt at blocking Craig Goodwin’s strike was deflected past Emiliano Martínez, but Argentina managed to hang on for a hard-fought 2-1 victory.

Up next was a tasty clash with The Netherlands in the quarter-final. The sides had met five times previously in the competition, with the most recent being in the 2014 tournament when Argentina overcame the Dutch on penalties.

Like in the tie with Australia, Argentina opened the scoring in the 35th minute. After a wonderful run, Messi picked out Nahuel Molina with an exquisite pass, the Atletico Madrid man, showed the composure of a striker to fire his side a goal to the good.

With just over 15 minutes remaining, a clumsy challenge by Denzel Dumfries on Marcos Acuña saw Argentina awarded a penalty.

However, a wonderful header and a well-worked free kick in the dying embers saw former Burnley man Wout Weghorst score a brace for the Dutch, sending the game to extra time.

Argentina had the better of the sides in extra time but failed to find a breakthrough, meaning another penalty shootout between the sides would be required.

Two saves from two from Emi Martinez allowed Leandro Paredes to give Argentina a two-goal advantage.

Enzo Fernandez had a chance to send his team through, but he saw his shot go wide of the post.

Emi Martinez was beaten by Luuk De Jong meaning Lautaro Martinez became the third man in a row who could send Argentina through. Martinez sent Noppert the wrong way and Argentina into the semi-finals for the first time since 2014.

Many expected that Argentina would face Brazil in the semi-final stage but their fellow South Americans failed to overcome a stern Croatia side who, like Argentina, enjoyed a penalty shootout victory in the quarters.

La Albiceleste took the lead, as they did in the previous two games, this time, one minute shy of their usual 35-minute mark as Messi opened the scoring with another calm penalty after Alvarez was brought down by Croatia goalkeeper Dominik Livakovic.

Moments later, Alvarez showed great skill and determination with help from a slight piece of fortune to finish off a brilliant Argentine counterattack.

An incredible run from Messi saw him beat Joško Gvardiol with an amazing piece of skill, before driving into the box, teeing up Alvarez, who ensured Argentina’s place in the World Cup final with a comfortable 3-0 victory. 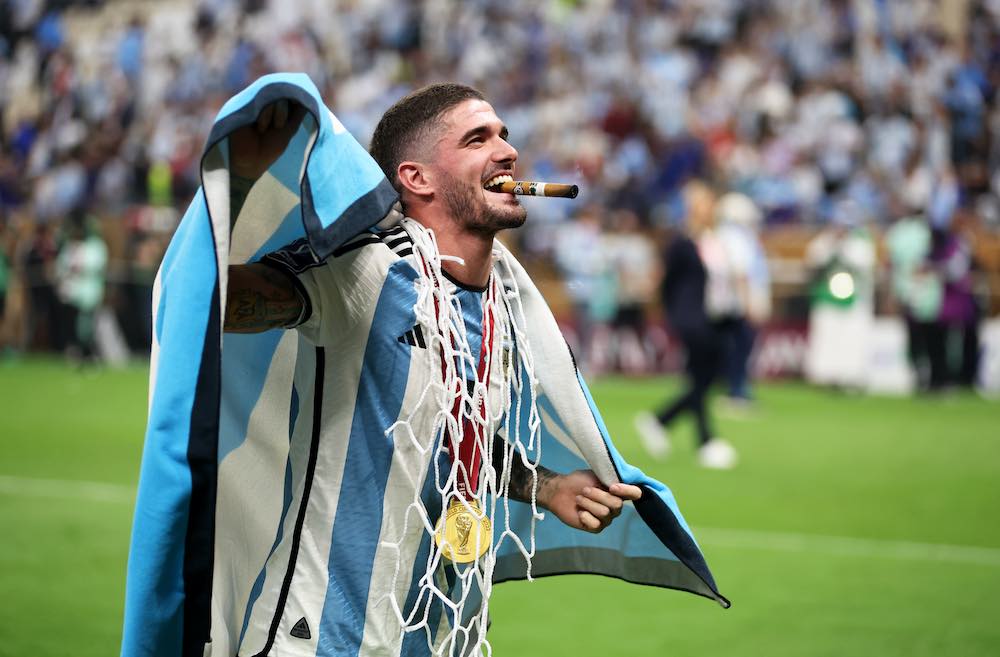 LUSAIL CITY, QATAR – DECEMBER 18: Rodrigo De Paul of Argentina celebrates with a cigar, Argentina flag and a cut piece of the net after the win during the FIFA World Cup Qatar 2022 Final match between Argentina and France at Lusail Stadium on December 18, 2022 in Lusail City, Qatar. (Photo by Clive Brunskill/Getty Images)

The final paired them up against the current World Cup holders France, a side they lost to at the 2018 tournament in the round of 16 in a classic 4-3 thriller.

Argentina dominated the early proceedings which eventually paid off when Angel Di Maria, who was having a brilliant game, was brought down in the box by Ousmane Dembélé which saw Polish referee Szymon Marciniak point to the spot.

With the whole world watching, Messi calmly stepped up and placed Argentina 1-0 up.

Moments later, one of the moves of the tournament saw Di Maria in tears as he placed Argentina two to the good.

Argentina was in cruise control and it looked like they were going to breeze their way to a third World Cup title. But a clumsy tackle from Nicolas Otamendi on Randal Kolo Muani allowed Kylian Mbappe to pull one back for France from the penalty spot.

Mbappe then played a one-two with Marcus Thuram, before firing the ball past Emi Martinez. France had completed an astonishing comeback, taking the game to extra time.

Messi thought he had won the game in extra time when he pounced on a Hugo Lloris save, but Mbappe completed his hat trick from the penalty spot after Gonzalo Montiel handed the ball inside the area.

Kolo Muani had a glorious chance to win it with the final kick-off extra time, but Emi Martinez produced one of the saves of the tournament to deny him, meaning penalties were required to determine the 2022 World Champions.

Mbappe stepped up first for France and beat Martinez for a fourth time, before, Messi equalized with a trademark calm penalty. Kingsley Coman was denied by Emi Martinez and then Aurélien Tchouamén fired his shot wide, sending Martinez into a dance.

With the score at 3-2, Montiel stepped up knowing if he scored, Argentina became champions of the world for the first time since 1986. He did just that, sending Lloris the wrong way and sparking wild celebrations.

The defeat to Saudi Arabia turned out to be a blessing in disguise for Argentina. From that moment, each match became a knockout tie and as the tournament went on Argentina grew stronger. Lionel Scalioni’s men showed true grit and nerves of steel to become Word Champions.

It would be impossible to end this piece without mentioning the other Lionel in the side, Messi, who has finally got his hands on football’s greatest prize, further etching his name as one of the greats of the game by replicating Argentine football icon, Diego Armando Maradona.

Loading...
Newer Post
Was It England’s Best Chance Of FIFA World Cup Glory Since 1966?
Older Post
Were Hibernian Right To Sack Shaun Maloney? Have Things Improved At Hibs One Year On?