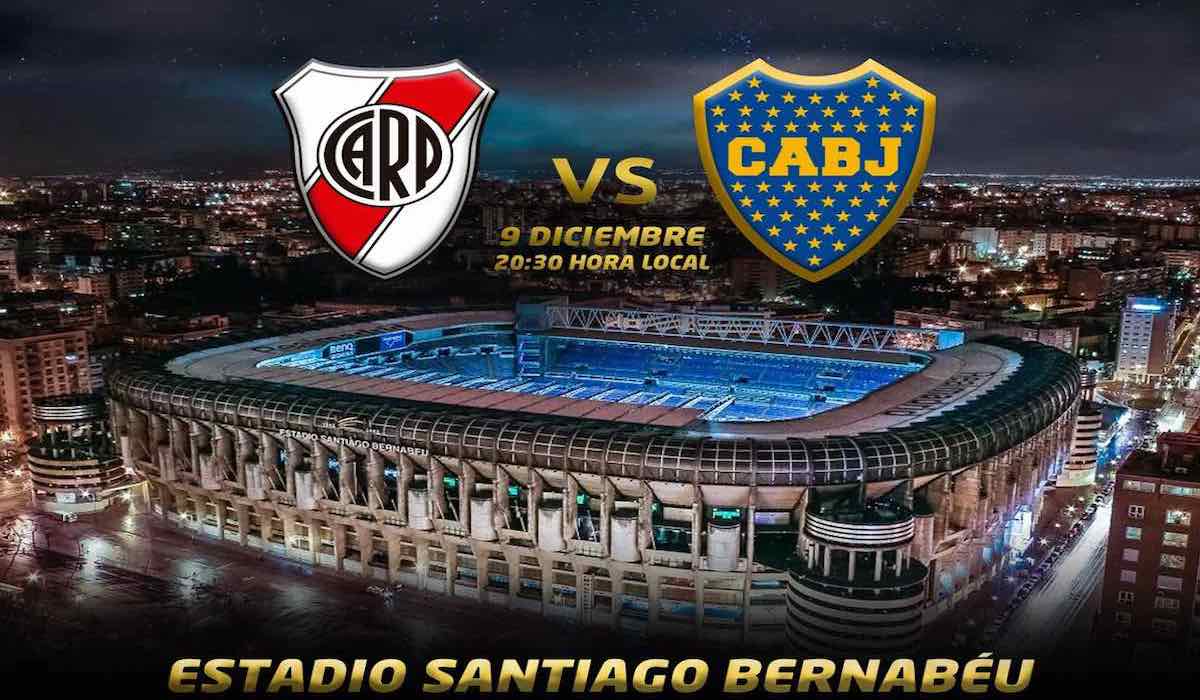 José de San Martín, liberator and national hero of Argentina once said: “You will be what you must be, or else you will be nothing”.

After Conmebol’s decision on Thursday to take South America’s most prestigious tournament final to the land of its former colonisers — the 2018 Copa Libertadores Final surely now means nothing.

In a TV interview on Saturday night, Conmebol’s president Alejandro Dominguez sat shellshocked in El Monumental as he tried to weasel his way out of taking any responsibility for the postponement of the final.

After some tougher questioning, he begrudgingly accepted they would need to carry out an investigation into their handling of the incidents.

There was more than a tinge of flippancy in his tone, as if he was doing everybody a favour rather than facing up to his responsibilities as president of the organisation that was in charge of an event that had ended in chaos.

A well documented Superclásico Libertadores incident in 2015 where River Plate players suffered at the hands of a home-made pepper spray in the tunnel of La Bombonera, led to the elimination of their fierce rivals Boca in the round of 16 while River went onto win the competition.

It was an incident that served as a perfect chance for Conmebol to rule with authority over one of its most prestigious clubs. At first they did – Boca Juniors were thrown out of the competition, a decision they had little time to reverse once it was made.

However, almost a year later, the other punishment – eight matches without fans (four home, four away) – was reduced to just two after Conmebol declared an amnesty – apparently in the spirit of its centenary year.

Is it possible that Dominguez doesn’t think that his federation’s weak stance back in 2016, when the decision to reduce the severity of Boca’s ban was taken, had any relation to a similar incident happening in the Superclásico just three years later?

Does he even remember?

On Saturday, it was the River fans who threw the objects at Boca’s bus, but the resignation of Buenos Aires security secretary Martín Ocampo told a story, as did the abject police escort.

There’s enough blame here to be shared around in Buenos Aires and there’s plenty of stories to counter the narrative that this was a problem stemming from the bottom of society rather than one from the top.

Buenos Aires’ Security Minister Martín Ocampo has resigned after this weekend’s Copa Libertadores debacle. Just a couple of hours ago both Buenos Aires and Argentina’s Security Ministries said those who threw missiles at Boca’s bus were the only ones responsible. https://t.co/GVe1qrY3b5

This was Conmebol’s (and arguably the AFA’s) showpiece event and its most historic and hyped-up final ever – they had warnings from history that this was a particularly volatile affair.

Therefore they should have been on the ball at all times, but were seemingly asleep on every set-piece throughout the weekend as fans watched at home in disbelief at their ineptitude.

Parallels have been drawn to the state of English football in the 1980s and the way English authorities and UEFA dealt with that. Yet, the problem with Argentina’s Barra Bravas goes much deeper – corruption is at the heart of it while a lack of will to address the issue is at the bottom of it.

Annie Kelley’s investigative piece for The Guardian in 2011 illustrates this, little has changed since then despite a ban on away fans coming in place in 2013.

The 59th edition of the Copa Libertadores had started innocently enough. Uruguayan forward Maximiliano Freitas, nicknamed The Tank, scoring just seconds after coming on for Bolivian side Oriente Petrolero in the qualifying rounds. His celebration that saw him jump into a car pitch-side went viral.

Oh how I love the Copa Libertadores… pic.twitter.com/kTg1QXvi0r

That was an example of the Libertadores at its most fun, but as the year wore on, many followers of the competition grew weary.

The knockout stages of the Libertadores and the Copa Sudamericana were marred by a series of controversies sparked by an ineffective Conmebol suspension computer-based system called Comet, that led to clubs fielding illegible players which in turn saw 3-0 walkovers.

Tensions and conspiracy theories grew as matches were being decided in the Conmebol offices rather than on the pitch.

The irony of the Copa Libertadores being played on the soil of Madrid, Spain – the royal home and capital of the continent’s former rulers has been lost on very few.

Copa Colonizadores and Copa Conquistadores de América have been trending in South America, and more gallingly and with glee in Spain. It is embarrassing and humiliating.

Dominguez spoke of the necessity of neutrality for the rearranged final. However it begs the question as to why South America’s premium tournament is going to be taken across the Atlantic rather than just to neighbouring Chile or to one of the many stadiums in Brazil that have proven capable of hosting grand occasions in recent years.

There is no excuse for this decision and for many South Americans the soul of the tournament has disappeared with it.

To understand why Conmebol have decided to sink so low to insult its public is to know how much contempt the organisation has for them.

Disappointing news for those who wanted to see real change for Chilean football.

Sebastian Moreno has been elected as the new president of the Chilean FA. He basically represents a continuation of the current, fairly inept regime.

Reinaldo Rueda set to stay on as Chile boss.

The ruling institutions (Conmebol and the ten member football associations) of South American football have disrespected, cheated and stolen from its public for decades, so Conmebol taking this final away from its people should not come as a huge surprise – one glance at the state of the women’s game on the continent shows us that.

Elsewhere, a tremendous achievement for Atlético Huila to reach the women's Copa Lib final after a 3-1 win on pens over Iranduba.

A timely reminder for Dimayor perhaps ahead of tomorrow's big assembly, where the all-male meeting will ponder scrapping Colombian women's league.

Just this week, Fox Sports, who cover the Conmebol Libertadores on the continent, discussed this controversy over and over for days on end with a scarcity of entertainment. Meanwhile there was little to no coverage of the exciting female version of the competition, that is reaching its conclusion this week.

Rather than Conmebol taking a sheepish, apologetic stance to its errors and decisions, it seems like the organisation is revelling in it – proudly publicising the final in Madrid as – La Gran Final.

Meanwhile they appear to be blind and deaf to an array of much more palatable solutions.

FIFA, CONMEBOL, GOVERNMENTS, CLUB PRESIDENTS … shame on you. Match should have been played locally with a women and children only crowd, like Fenerbahce in 2011 #Libertadores2018 now #Conquistadores … utter, utter disgrace

Whether the stadium will be full or not in Madrid remains to be seen – it could well be. There’s a fairly large Argentine community in Europe and most Argentines support either River or Boca and both sets of fans are allowed. Yet is there really enough enthusiasm for this final still?

If there is, then there’s also the very real possibility of the fans flying across from the Atlantic – do not be surprised if the key players of the Barra Bravas of both sides make it over and barely spend a penny in doing so. Safety is therefore not guaranteed.

Moreover, it also remains to be seen if Boca Juniors will play ball. A hotel booking in their name in Madrid indicates they will, but the noises coming out of the club on Thursday night suggests they are still keener to take this through the courts than to step onto the field of play on Sunday 9th December.

2019 was set to be the first year of the one-off Libertadores Final and it is Santiago, Chile that has been chosen as the host city for that spectacle.

Yet it seems from Conmebol’s most recent publicity of this year’s final that it is now being seen in the eyes of Conmebol officials as a one-off match. Cynics suggest that this is perhaps something they wanted all along once these two sides had made the final.

Furthermore, moving the final outside of South America has now set a precedent. Due to economics and poor organisation, South American fans already have to deal with losing its top stars to European football at an ever-increasing rate. Could they at least be allowed to keep their most prestigious final?

Notice how CONMEBOL are presenting this now – The Grand Final. Not even a mention of it being the 2nd leg anymore. And yes, I know it doesn't matter as it ended in a draw and there's no away goals, but ultimately by doing this they've wiped the first leg from history. https://t.co/3UuL4wMzdL

Away goals don’t count in the final, so technically the second leg had become a one-off match anyway, but that is besides the point.

The entertaining and historic 2-2 draw at La Bombonera has seemingly been cruelly wiped from the record books, and by playing the second leg in Madrid, Spain, so has the meaning of the competition.

And that’s the final insult.