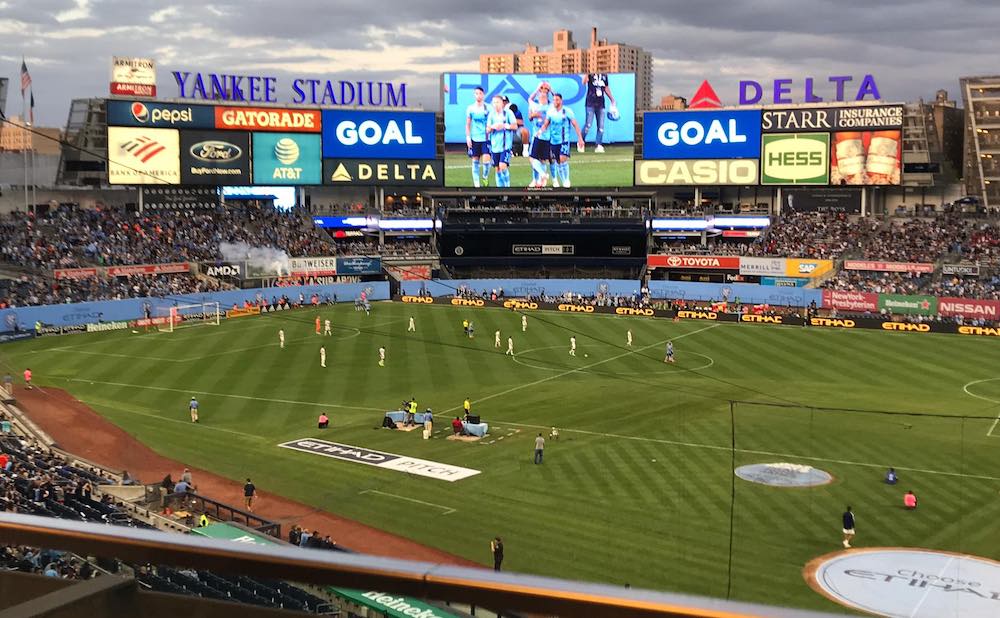 A low cross from the left side of the pitch. Tap-in, first goal of the night. Finding a player in space across the 18-yard box with a delightful pass.

Seconds later another goal. Lobbing the ball up the pitch to initiate another attack.

Three passes later, a third goal. A similar lofted chip to find a teammate running in behind the defense.

Passes inside the 18-yard box, unfazed by the defenders surrounding him, playing a one-two before curling a low shot into the bottom right corner. Goal number five.

…a stellar performance from Maxi Moralez

That was just a glimpse of the kind of form Maxi Moralez was in last night as New York City FC beat FC Cincinnati 5-2.

A goal, two assists, and two critical passes for another two goals truly encapsulated the amount of talent in Moralez’s feet.

The Argentinian played a couple of different positions during the game, but looked increasingly comfortable throughout.

Switching the play, helping to play out of the press, getting into the hole to advance an attack, and making runs in behind the Cincinnati back line, Moralez was central to the hosts’ victory.

“Maxi Moralez: everybody knows he’s one amazing player because he can play like a double-six, like a ten,” said NYCFC manager Domènec Torrent.

After his latest starring role, Moralez is tied in Major League Soccer for most assists after securing his fifth and sixth of the season. He also increased his goal tally to three.

He has now been involved in eight goals in the past five games, scoring three and getting five assists.

“The important thing is to win,” Moralez said.

“Then obviously when someone scores, personally it’s always good and it gives you lots of confidence.”

It wasn’t just Moralez who played well for the team, though. Brazilian striker Héber was treating all night and took his chances well. Although he scored an own goal, his two goals were testament to his otherwise great performance.

Anton Tinnerholm also had a game to remember. The right back created two goals, recording his first assists of the season.

In general, the whole team looked calm and composed throughout the 90 minutes. Even when the Orange and Blue pressed them in their own half, NYCFC displayed a strong resilience and determination to play out from the back.

On a night when Pep Guardiola came to watch the match, the home team showed off their capacity to not only keep possession, but to move the ball around the pitch with a purpose to make space.

Go inside the #NYCFC locker room after a big win at Yankee Stadium 📹 #ForTheCity pic.twitter.com/MEnFajpWpp

What the win means for NYCFC – looking ahead

Thanks in part to the Argentinian’s amazing form, NYCFC find themselves in sixth place in the Eastern Conference. That despite having played fewer games than all the clubs above them in the table. Should the team be able to win those games in hand, they would climb up to first place.

The win means the club extends their undefeated run to 10 games. City have also scored in each of their last eight matches.

City will hope Moralez can maintain his stellar performances in the next match he is called upon. NYCFC will play North Carolina FC in the Open Cup, but changes to the starting eleven will certainly be made.

“The Open Cup, my idea is to play with these kinds of players [Justin Haak and Keaton Parks] that in the moment don’t play,” Torrent added.

Although that doesn’t mean Moralez won’t play, considering the number of players absent due to international duty and injuries. One of them being from last night, James Sands.

“Jimmy unfortunately was injured and will maybe miss 3 or 4 weeks because he broke a bone in his arm,” Torrent confirmed after the game.

Another loss for FC Cincinnati and what’s next

Meanwhile for FC Cincinnati, this loss leaves them as the worst team in the MLS so far this season. It’s their fourth loss in a row. In 12 games, they have only managed to pick up four out of a possible 36 points.

Up next for them is Louisville City FC in the Open Cup, where they will be hoping to return to winning ways before before hosting LA Galaxy.