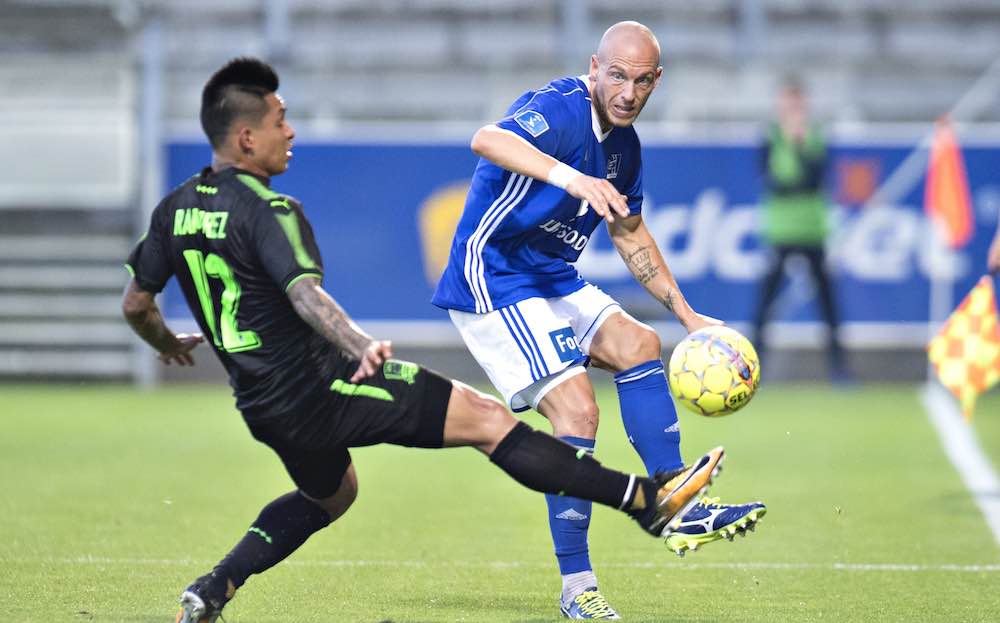 You signed for AC Horsens in 2018. How are you enjoying your time there so far and how would you describe a club such as AC Horsens?

“AC Horsens are a small club in Denmark. The club do not have a very big financial budget compared to other teams in Denmark but we do a very good job on the pitch, and we manage to stay playing football at the highest level in Denmark.

“This season especially we have become a difficult team to beat, winning our home matches, so we are doing okay.

“I am pleased to be providing assists and scoring a goal every now and again and as a left back I am very pleased about that.”

You played three seasons for Zenit Saint Petersburg in Russia. How do you look back on your time at the club and your time in Russia in particular?

“When I look back on my time at Zenit Saint Petersburg I get many positive vibes. I arrived at the club and I did not know much about Russian football. I took a chance, and when I moved to Russia I did not know that the club had so much money, I was quite surprised.

“Zenit bought me for 15m Danish Krone (€2m). Some of my teammates were brought for 400m Danish Krone, which was unbelievable — to play alongside players such as Hulk and Axel Witsel.

“I knew it would be hard but I did not play as much as I hoped I would. I had a great time. Saint Petersburg is a beautiful city and Zenit are a huge club that achieved great things. At the end of the day it was great experience and I learned a lot.”

You represented Denmark at all youth levels as well as gaining full international caps. How do you look back on representing your country, and do you have any highlights or special memories?

“Yes, of course, making my full debut for Denmark will always be special even though it was a friendly match against the United States, which Denmark won 3-1.

“When you make your official debut and put on the shirt and play in front of my home crowd in Aarhus in the AGF Stadium, who I grew up playing for, was a big moment and a very special feeling.

“To be around the national team was a great feeling, [as was] to be thought of as one of the best players in Denmark.

“I look back on representing my country with pride. It is something that I will always remember.

“I also have experience of playing Champions League matches with Zenit Saint Petersburg and I would rate those matches as a higher quality than international level.

We have spoken about your experience at club level and also at international level. Could you say who are among the best players you have played alongside so far in your career?

“I believe there are two players in particular that I will say who are among the best players I have played with as they were unbelievable individual players.

“The first one is the Brazilian, Hulk, now playing for Shanghai SIPG. He has tremendous speed and he could create something out of nothing.

“The other player is the Portuguese national player Danny. Both players could make the difference on the pitch every single time.

“Every time that we were under pressure, even just a little bit, you could give these two players the ball and they could create something.

“They are both fantastic players and it was great to have played alongside them at Zenit Saint Petersburg.”

I can imagine in your position as a left-back that you have come up against many difficult opponents through the years. Are there any that stand out for you?

“I would say Stephan El Shaarawy at AC Milan. At the time, AC Milan were a really good team who we played against in the Champions League.

“Also Joaquin, Javier Saviola and Isco, when they were at Malaga, were also excellent players. When Isco was at Malaga he was unbelievable. We lost away to them in the Champions League and he scored twice. He was not my direct opponent but he made the difference on the pitch in that match.”

Finally, Michael, could you say who are the coaches and managers who have played a key role in your development as a professional footballer?

“With this question, there is no doubt. At Zenit Saint Petersburg my manager was Luciano Spalletti and he was a really experienced coach. He knew exactly how he wanted things to be done.

“He was a little bit strange at times and sometimes he would have a fight with the players, but he was unbelievably intelligent.

“He came to Zenit during a very difficult period for the club. They had not won the Russian Championship for four years, and during his first season in Russia we went through the entire league campaign without a loss.

“He did a great job winning the Russian league title two out of three seasons.

“He also taught me a lot so there is no doubt that he was a great manager for me even though I did not play a lot under him.”