MLS is Back: Alejandro Bedoya Leads Youthful Philadelphia Union To 1-0 Win Over NYCFC 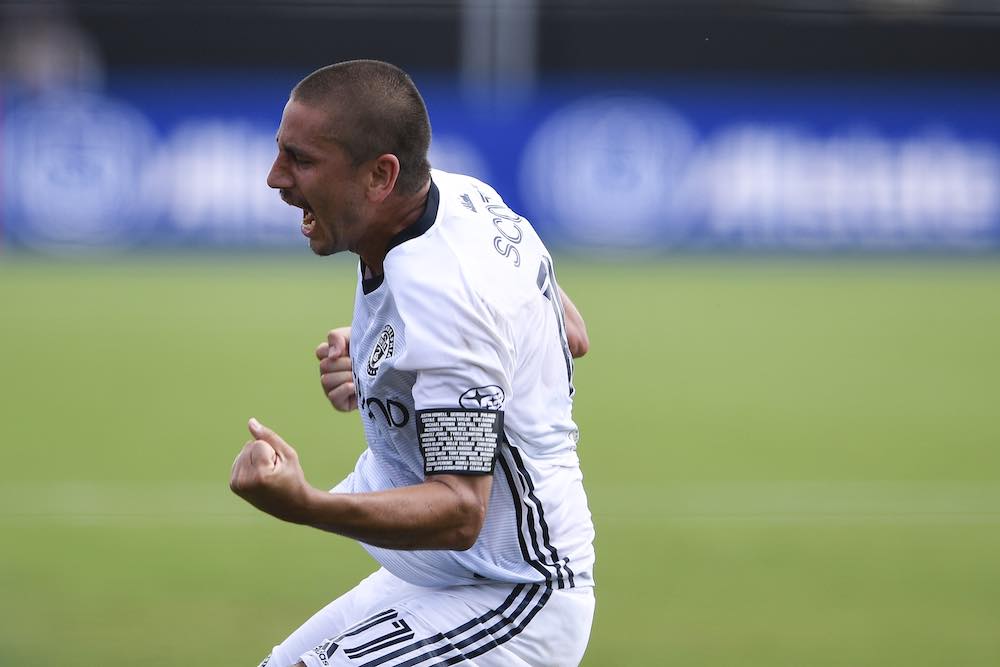 In the first of several early kickoffs during the MLS is Back Tournament, the Philadelphia Union rather patiently absorbed New York City FC’s abnormally impotent attack and secured all three points in a 1-0 victory.

After a slow, perhaps sluggish start by both sides on Field 18 at ESPN’s Wide World of Sports Complex, Union found a way through Alejandro Bedoya after a rebounded cross fell back at his feet and he slotted home past NYCFC’s Sean Johnson. Johnson managed to get a hand on the low driven effort but was unable to keep it from crossing the line.

The goal came from one of Philadelphia’s few second-half forays into the final third. Though looking like the more progressive side in the first half, which proved to be mostly non-incidental, Union were forced to sit on their haunches for most of the back half of the match after NYCFC turned up their pressing and intensity when out of possession.

Here is what we learned from the match.

1. An Injection of Youth

Union, who some pundits have considered tournament favourites (or at least among the top contenders), showcased their defensive stability and organization despite relying on youth along the backline. Three of their four defenders getting the nod for today’s match were 24 or younger, including 21-year-old Mark McKenzie, an academy product who prior to this season has spent his time in various Philadelphia feeder teams and affiliate clubs.

Those starting the day, like McKenzie and central partner Jack Elliott, put on an encouraging display at the beginning of this restart tournament. They rarely let New York penetrate into dangerous areas, and when an attack began to look threatening, they collectively swarmed and put out the danger.

Especially during the second half when NYCFC looked to go up a gear or two, the Union defence were under relatively heavy pressure. Over the course of the match, they conceded seventeen shots. Of those that were on target (7), only one looked to be troublesome for Andre Blake in goal — a low, curling effort from Heber after a cross from NYCFC right-back Anton Tinnerholm was redirected to the Brazilian’s feet at the edge of the area.

Youth wasn’t just present at the back for Union, however. Starting behind forwards Ilsinho and Kacper Pryzbylko was 19-year-old Brenden Aaronson, one of the brighter talents to come out of the Philadelphia youth academy in the last few years. Having made his MLS debut last season, Aaronson registered an exciting, though not incredibly productive 1800 minutes during the campaign that the youngster will be looking to build on in 2020.

He looked both incisive and one of the more technically successful players on the pitch, and was nearly on the scoresheet — the rebounded ball that landed at Bedoya’s feet for the lone goal on the day came from Aaronson’s shot that was narrowly blocked by NYCFC captain Alexander Ring.

Union’s long-time head coach Jim Curtin opted to continue the youthful trend with half of his substitutions as well. 19-year-old Jack de Vries made his first-team debut, replacing captain and goalscorer Bedoya on 84 minutes. Though not earning enough time on the ball during his cameo to adjudge his performance on the day, his position in the squad at the moment is telling of what Curtin and Union think of him.

Anthony Fontana also saw a half-hour’s work towards the end of the match after replacing Ilsinho on 58 minutes. Fontana was pulled up from Philadelphia’s youth ranks midway through the season last year and, despite only featuring for 119 minutes, has been kept in the first-team conversation at least for this tournament. He injected some pace into the Union forward line and gave Aaronson a different option to pass to.

2. At the Races, Just Ineffective

New York City have had an odd beginning to their 2020 MLS season.

Despite having the most goals scored and best goal difference in the Eastern Conference last season, they’ve failed to open their account in the league this season. 1-0 league losses to away from home to Columbus Crew and Toronto FC before the coronavirus pandemic suspended the league and their tournament opener don’t paint NYCFC in the greatest light at the moment.

In fact, they are the only club in MLS who have yet to find the back of the net. Despite starting their heavy hitters up-front in Heber, Valentin Castellanos, and Maxi Moralez, Union stalwarts on the day such as McKenzie and new signing Jose Martinez limited their effectiveness in the final third.

Having made few changes to their squad over the winter break, it would’ve been fair to expect New York to have picked up where they left off last season. One factor that stands out between the two campaigns, however, is the appointment of head coach Ronny Deila.

Though he won the two league matches he managed in at the end of the 2019 season, Deila seems to have struggled to impress his philosophy and playing style on NYCFC. On the wrong end of a 1-0 result once again, New York had trouble breaking Union’s lines despite having more possession (59.5%), a higher pass completion ratio (87% – 78%), and more presence in the final third.

NYCFC’s pressing, especially in the second half, ensured that they were the more dominant side for the duration of the match. Coupled with the experience in their first XI, there’s little to say about their 2020 performances to date other than “extraordinarily ordinary.”

Deila has a job to do, to say the least.

3. A Step in the Right Direction

Whether new to MLS or an avid viewer, one sight during the match was fresh for all.

Our players had a message today: #BlackLivesMatter pic.twitter.com/wCVx6DPBro

Initial confusion was overtaken by respect after it was learned the Union players had on the backs of their kits not their names, but the names of victims of violence and police inequality coupled with a patch on their lower backs that read “One Name Too Many.”

While the space for this show of support for the ongoing Black Lives Matter movement across the world deserves an article of its own, it’s important to mention the unprecedented nature of Union’s display of respect.

From the Bundesliga, the first league to restart after the outbreak of coronavirus, to the Premier League and now MLS, the Black Lives Matter movement has progressively made its way across the globe as societies turn inward to reflect on themselves as both individuals and a collective. Each match from each league has showcased their branded support of the movement, which can only be viewed as a positive from the standpoint of those who are looking desperately for change.

There have been individuals that have made larger gestures of support, both on and off the pitch. Marcus Rashford has successfully begun and funded a food vouchers program for the black community in England that have been hit harder than many due to the coronavirus. Several footballers have worn insignia and undershirts during matches supporting Black Lives Matter. These are but a few, though important, examples. 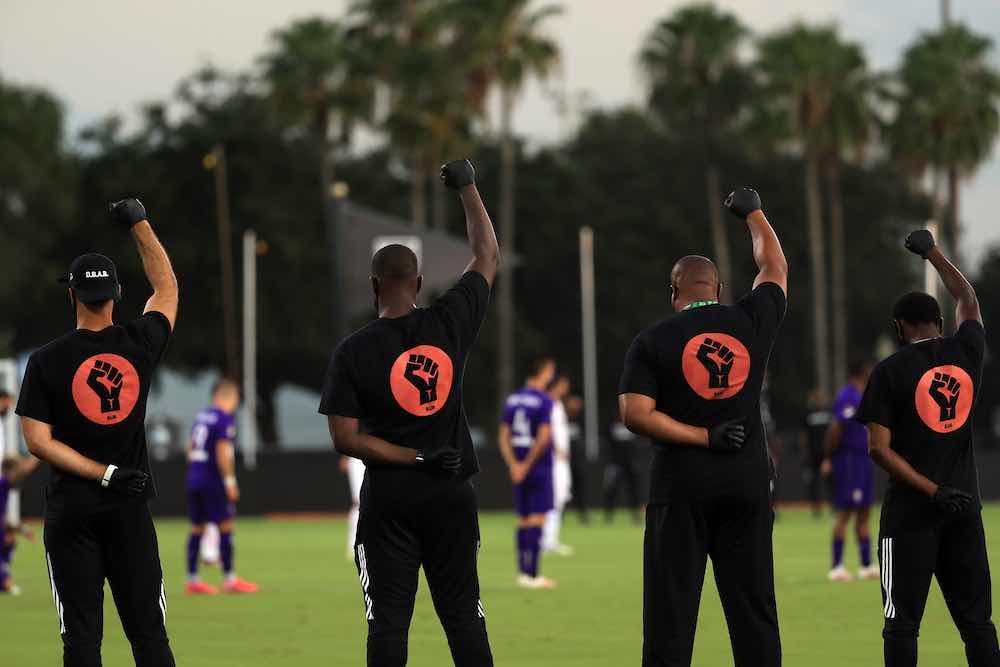 But as an organized effort by a club, by the players, on the pitch, Philadelphia Union may be the first to conduct such an extensive and specific tribute while out on the grass.

Each name on their kits was hand-selected by the players — black players like full-back Raymon Gaddis chose names that were specifically important to them, for one reason or another. The rest of the squad chose the names of victims they had learned about either during the resurgence of the BLM protests across the globe or after having conducted research within the squad of more examples of violence in recent years.

Philadelphia Union players replace their names on their shirts with those of black victims of police brutality #BlackLivesMatter https://t.co/tNQ0pnDqq8

The kit name changes don’t in any way declare the problem of racism and inequality solved, but it does show that people are listening.

Loading...
Newer Post
Anton Wede On His Time With Falkenbergs FF And Being Coached By Henrik Larsson
Older Post
Dead Heat In Dead Rubber Leaves Everton And Southampton Thinking Of Next Season