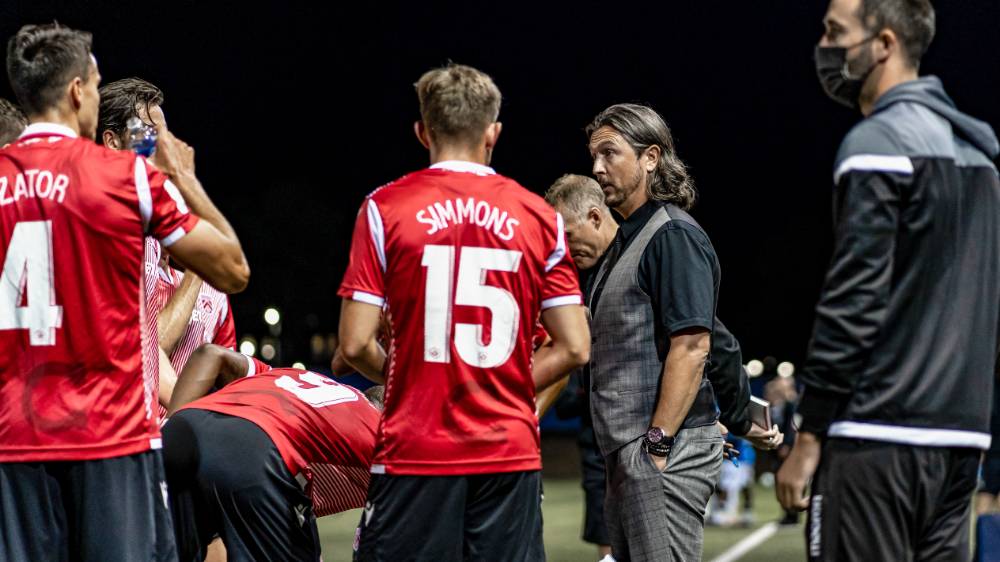 Cavalry FC head coach Tommy Wheeldon Jr is confident his side can get the result against York9 on Saturday which will see them advance to the next round of the Candian Premier League’s Island Games.

After a fine start to the tournament, taking 10 points from their opening four games, the Cavs now find themselves level with Saturday’s opponents in second after successive defeats to Atletico Ottawa and Pacific FC.

However, Wheeldon insists his side have never been one to get “too low on losses”, maintaining that Cavalry have what it takes to get a result and move onto round two, using the confidence that brings as a platform to press on from there.

“Four wins get us through, that’s how we’ve measured it out so far,” Wheeldon told reporters over a Zoom call on Friday.

“Then everybody forgets the bumps because now, anybody that goes through to round two will have faced some type of adversity, so round two becomes a whole new kettle of fish.

“So 100 per cent, [winning] creates a confidence boost but we’re not an unconfident team, we carry ourselves well. We’ve never been a team that are too high on the wins and too low on the losses. We just get on with business, but we always carry ourselves with a quiet confidence.”

York9 are the Island Games’ only remaining unbeaten team, winning twice and drawing their other four matches so far.

Wheeldon believes the keys to that record have been their willingness to maintain possession, set-piece prowess and the form of midfielder, Joe Di Chiara, who has netted three goals in four appearances so far having scored just three times in 54 career games prior to the tournament.

And the Liverpool-born tactician is expecting a tactical battle reminiscent of a poker match with Jim Brennan’s men on Saturday, one he intends to win with “patient” defending.

“They’re good. They want to play, they like to pass it around between the ‘keeper and the centre-backs and their holding midfielder. They want to recycle the ball,” Wheeldon responded when asked about the Nine Stripes’ unbeaten record.

“I think for us, if we don’t win it back early, we just have to sit back and be patient with our defending because they haven’t scored really well from open play, they’ve scored very well from set-plays, whether it be corners or free-kicks. It’s just [about] playing a smart tactical game.

“It’s game seven, they’re coming in with a day less rest, so we’ve got that as an advantage, but they do have Joe Di Chiara who has been their best player so far.

“This is like a quarter-final, win and advance. It’ll be interesting to see at what stage do you take the risks and who does it first? I think it’ll be a great poker match.”