“The SuperDraft Is Special, The Experience Is Amazing” – Andre Shinyashiki On Growing Up In Sao Paulo & The MLS SuperDraft 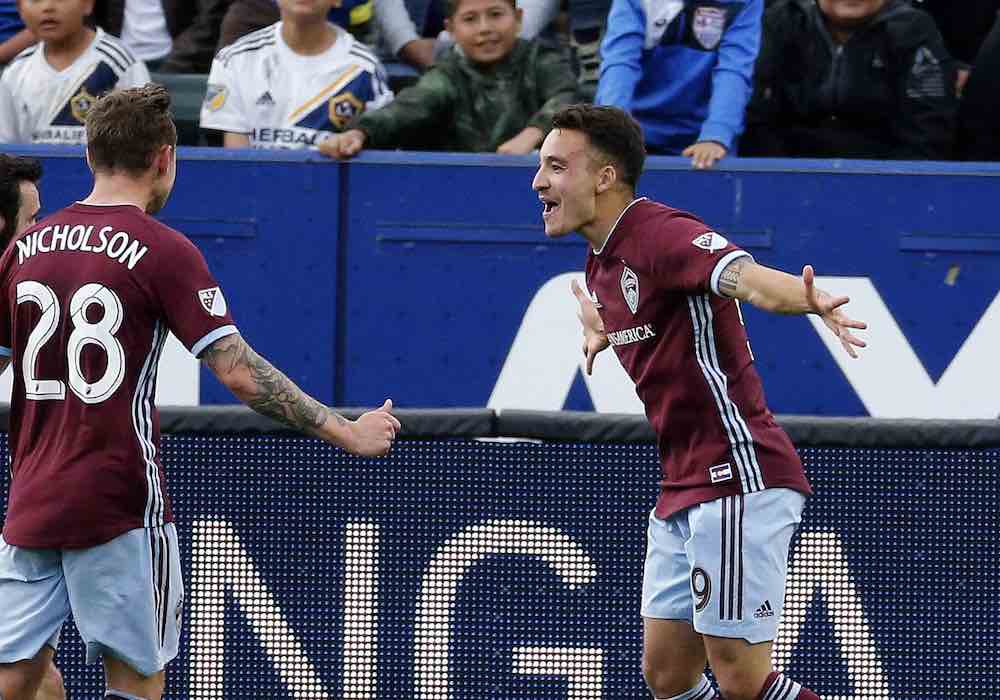 With the addition of Michael Barrios from FC Dallas alongside existing players like Jonathan Lewis, Diego Rubio and exciting homegrown attacking midfielder Cole Bassett, the Colorado Rapids are stacked for talent in forward areas.

Andre Shinyashiki is another name on that depth chart and has the potential to be one of Robin Fraser’s most important players in 2021. But given the level of competition in Denver right now, the 23-year-old cannot take anything for granted.

But then again, that’s something Shinyashiki has never done and he is very familiar with hard work. Though he is of Japanese descent through his father and Italian descent through his mother, Shinyashiki was raised in São Paulo, Brazil. His upbringing there exposed him to challenging situations but made sure he has always been thankful for where he is and what he has.

“Culturally, in Brazil, you don’t take anything for granted because you get to see a lot of what people don’t have and what life is like for people who don’t have a lot,” Shinyashiki told WFi.

“Soccer is a universal language, and in Brazil, that’s even more true because you get to meet people that come from different backgrounds and have different stories, and come from places you just don’t realise exist if you don’t go there through soccer.

“I got to see some of the worst places in Brazil because of soccer, I met people that come from terrible backgrounds and those things really made me who I am because I learned not to take anything for granted. I really realised how good of a life I had and how much I needed to appreciate that.” 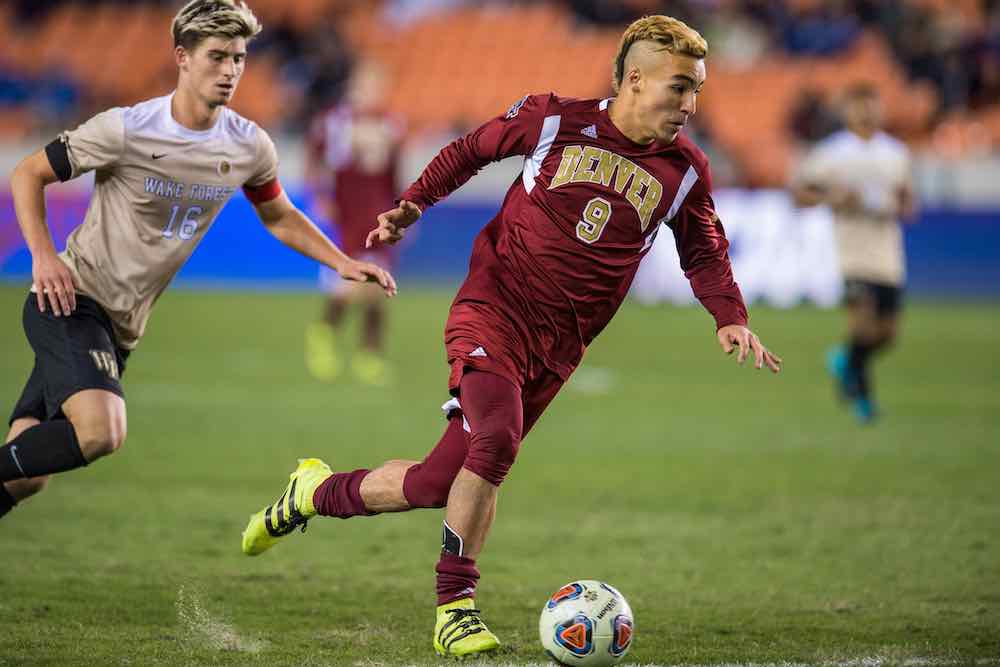 Shinyashiki playing for Denver Pioneers in 2016.

Shinyashiki admits that what he saw in Brazil was a sharp cultural contrast to what he witnesses in the United States, where he admits there is more “entitlement” in the world of soccer, with more expectations of outcomes rather than a willingness to work for them.

“I think that sometimes, people in the US and especially some of the people I meet in soccer in the US do take things for granted,” he explained.

“Not all Americans, that’s a bit of a stereotype, but a lot of them I met in soccer were just entitled. They think they deserve something.

“That’s the biggest difference for me, I never thought I deserved anything. I always had to work for something because I saw in Brazil how hard it was for people to get what they wanted and how much they had to work.

“In soccer, I think that’s the biggest difference, you see Brazilians and they’re crazy about the sport. There’s nothing else in life, it’s soccer or nothing.

“In the US, it’s more like ‘okay, we can play soccer now, then we go home and nothing really happens.’ It’s more like a hobby than anything else.”

“I will never speak badly of the SuperDraft, I don’t care how much the league or the culture changes”

The fact that Shinyashiki is actually an important attacking piece on a potentially high-end Major League Soccer team is a miracle unto itself. After all, this is a player who was still plying his trade at the college level up until the end of 2016, while from 2017 to 2018 he played in the Premier Development League (now USL League 2) with the Rapids’ U23 team.

In January 2019, aged 21, Shinyashiki finally got his professional break as the fifth pick in the first round of the 2019 SuperDraft, selected behind Frankie Amaya but ahead of the likes of Tajon Buchanan, Kamal Miller and Hassani Dotson in what proved to be a bumper year.

The importance of the SuperDraft is one of the most hotly debated topics around MLS, especially since the league took the decision to host the 2021 event online even before the pandemic forced most businesses to exist in a universe of Zoom calls and Slack channels.

But from that 2019 crop, Dotson was recently one of the few bright sparks in the United States’ failed Olympic qualifying bid, while Amaya was unlucky not to be in Jason Kreis’ squad and is the interest of intense transfer speculation linking him with a transfer away from FC Cincinnati to New York Red Bulls.

And in 2020, Orlando City picked up Daryl Dike, who has since moved on loan to Barnsley, lighting up the English Championship, demanding a reported transfer fee way beyond $10m and making his mark on the US Senior Men’s National Team. New England Revolution centre-back Henry Kessler and Nashville SC’s Canadian international full-back Alistair Johnston were among last year’s other success stories.

Understandably, Shinyashiki is an avid defender of the system which gave him his shot at the professional level, criticising MLS for taking it online and robbing budding talents of potentially life-altering moments.

“I will never speak badly of the SuperDraft, I don’t care how much the league or the culture changes,” he said.

“The SuperDraft is special, the experience is amazing. I think the way it works is super cool, how the teams get to pick players in order and how you don’t know where you’re going to end up and there’s all that buzz around it.

“I do think MLS went in the wrong direction by taking away the actual draft and doing it online. I think it took away a lot of the beauty of it, having those people together.

“For my family and me, it was an amazing moment. Probably one of the greatest moments of my life and for other kids, they’re not going to have that because they’re changing the way the draft works.” 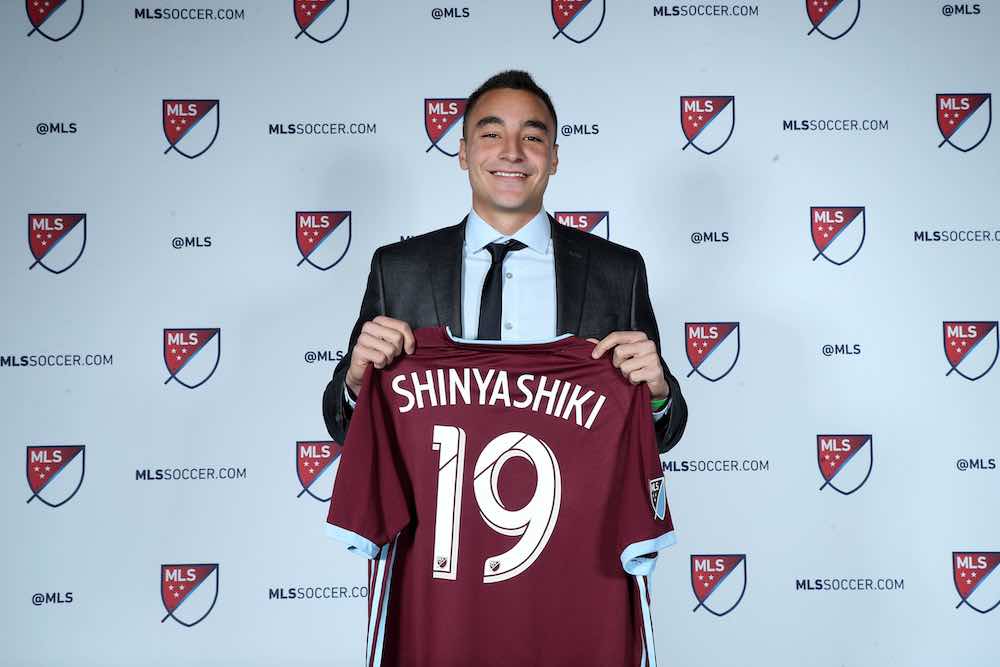 By marginalizing the SuperDraft, Shinyashiki believes MLS is robbing its clubs of the chance to pick up potential talent on the cheap, while simultaneously denying young players who needed a little more time to develop a route into the professional game.

When asked why the league is moving away from this uniquely American system, Shinyashiki suggested it could be because MLS clubs are trying to move player development and talent acquisition exclusively in-house.

“I’m not going to say it’s beating the homegrown system but it’s head-to-head,” he said. “You get really good homegrowns and you get really good draft picks, so why are we shifting away? Personally, I think it’s because the SuperDraft isn’t MLS-related.

“You have to go somewhere outside of your MLS clubs to then come back to your MLS clubs. It’s a little bit of a problem for MLS, they want to keep the pool of players in the same place, straight from an MLS academy to an MLS club. I think that’s why there’s this stigma and holding back of the SuperDraft that I completely disagree with.

“People from overseas don’t understand what it’s like. But I think it’s super cool and it’s worth it. You see how many crazy good players come through. Hassani Dotson was in my year, he was drafted at the end of the first round.”

If it was up to Shinyashiki more clubs would improve their processes in order to prevent future players, who may have similar potential to the likes of Dotson and Dike, slipping through the cracks.

“If the clubs do their homework, they will find players,” he added. “Think about how many people passed on Dotson and got players that didn’t necessarily turn out like him. If you do your homework and really put in the effort, you will get good players.”

“I want to score goals, get assist and help the team. I think we can win a trophy this year”

The word ‘momentum’ gets tossed around a lot in soccer but given the events of 2020 and the COVID-19 pandemic, it feels less cliché now than ever before.

Teams have seen upward trends stopped in their tracks and taken monumental financial hits, scuppering any grand transfer plans they may have had. Others have seen the rug pulled from underneath them, falling toward the relegation trapdoor or, in MLS, failing to make the Playoffs.

But for individual players, the pandemic has presented its own set of challenges. Worked harder than ever before due to a packed schedule, many have fallen to persistent injuries caused by fatigue, while others have simply run into a career roadblock, losing momentum gained prior to March last year. Shinyashiki is certainly a player who falls into the latter category.

Heading into last season off the back of a 2019 campaign — his first out of college — in which he managed seven goals and four assists, enough to pick up the MLS Rookie of the Year award, Shinyashiki was primed to lead a talented Rapids side up the table and into MLS Cup contention.

Instead, multiple stoppages in play due to COVID outbreaks limited him to just 16 appearances and four goals. A poor return given the standards he’d set the season prior, though Colorado did play fewer games than anyone else in MLS.

“Yeah, 100%. I don’t think the virus helped anybody, me especially,” Shinyashiki responded when asked if the pandemic was the reason behind his falling numbers.

“Coming off a big year, I wanted to follow up with an even bigger one and obviously, that didn’t happen because of the virus and a bunch of other reasons.

“It’s easy to blame it on the virus that I lost momentum but I just think I should have had a better year than I did. I don’t think I had a bad year, I contributed to the team in a number of different ways that sometimes went unnoticed but I definitely feel like I lost some momentum there. I’m looking forward to gaining that back this year.”

As he mentions, Shinyashiki does offer more to the Rapids in terms of just raw goals and assists. The 23-year-old led the team for pressures on the opposition per 90 minutes (20.3) among players with more than 475 minutes under their belts, while he was second only to Younes Namli (3.71) for successful dribbles per 90 (1.93) and generated 1.4 expected assists, suggesting he was still a creative influence.

But Shinyashiki’s main focus for 2021 is getting back among the goals, both scoring them himself and providing for his teammates, to help deliver silverware for the Rapids.

“I want to score goals, get assist and help the team. That’s my ultimate goal,” he said of the coming season.

“I think we can win a trophy this year, we have that quality here and that’s my personal goal. As long as the team achieves their goal, I’m going to look good as well.

“Pre-season has gone great. We’ve had a couple of different scrimmages, got some clean sheets, I’ve scored a couple of goals. I feel good and hopefully, that can translate into the season.”

Given what it’s taken to get this far in his career, you wouldn’t bet against Shinyashiki getting right back on track in 2021.